The University of Alabama in Huntsville (UAH) recently announced the 2017 UAH Foundation award recipients. They are: Ethel Boughknight, Laurel Long, Midori Maloney and Cecille Spina. UAH Foundation Staff Award recipients receive a check for $1,000 and a certificate of appreciation. Additionally, they will be recognized at a special awards ceremony.

The university will also recognize employees for completion of key service milestones of five, 10, 15, 20, 25, 30, and 35 years of regular, full-time service to UAH. You may visit the HR website to view and congratulate colleagues in your area that are being recognized for this important milestone. 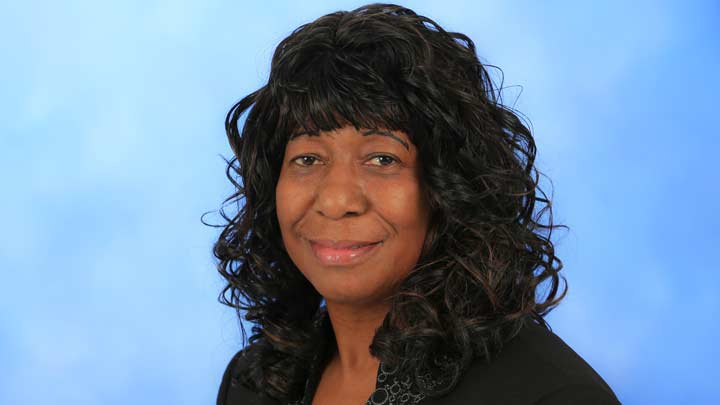 Ethel Boughknight has "a lot of good memories" of her time at UAH. She began her employment with the university in October 2009, in Custodial Services within the Facilities and Operations Department.

When she started working in Madison Hall, Boughknight completed her duties using brooms, mops, and spray cleaner. "It was basic cleaning, but the floors looked good," she said. After a few years of cleaning the old fashioned way, Boughknight and another co-worker assigned to Madison Hall were placed on a team by a custodial supervisor, and told to clean the floors of the three-story building with a buffing machine. The team of two quickly ended up being the me, myself and I team, because when Boughknight's co-worker knew in advance that he was supposed to help buff floors, he was a no-show at work. Boughknight was never actually trained to run the buffer but taught herself how to use the monster machine. "I said a quick prayer and began using the machine and I have been buffing ever since," she said.

Boughknight's nominators remain anonymous to her. "I don’t know who nominated me, but I am thankful to each of them. This is an honor and I am grateful to whoever nominated me. I thank God because without Him, I can’t do anything."

In her spare time Boughknight loves babysitting her granddaughter and singing in the New Life Seventh-Day Adventist Church choir, and teaching Adventists. 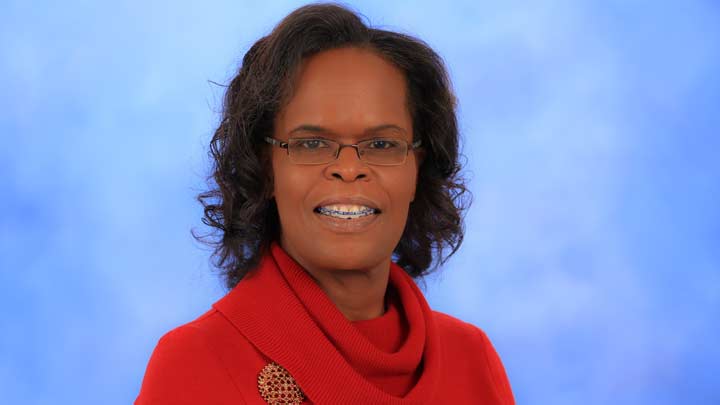 Long's job is to provide leadership for all of the human resource (HR) functions of the university – recruitment and hiring, benefits, employee relations, HR information systems, training, and HR compliance. "Honestly, I love everything about my job because I get to interact with so many different people at all levels of the organization and my days are never boring," she said. "My least favorite part is when I get bogged down in paperwork and reports, which leaves me very little time to interact with people in a meaningful way."

Long said that she is extremely humbled and honored to receive the Leadership Award. "I never expected that I would be a staff award recipient. That was the farthest thing from my mind. I’m grateful that there are those in the university community who think I bring value to the organization. I want to continue to make UAH the best place to work in the Tennessee Valley!"

In her leisure time she loves spending time with family – her husband and 16 year-old daughter. Long's parents recently moved to Huntsville and she enjoys spending time with them as well. Additionally, Long loves to cook and collect cookbooks, read, play handbells, and play Scrabble. 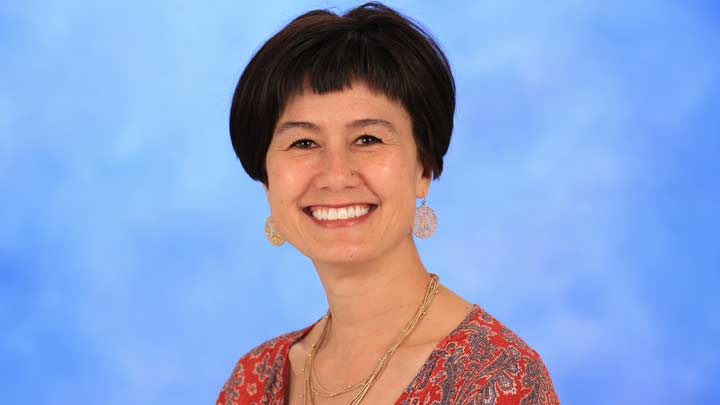 Midori Maloney began her employment with UAH in February 2008, as the office manager for the Center for Management and Economic Research (CMER) in the College of Business Administration. Currently, she is the Marketing, Recruitment and Event Planner for the Graduate School and International Services, directed by Dr. David Berkowitz, Dean of UAH Graduate Studies and Professor of Marketing.

Maloney's duties include recruiting graduate students by marketing the university's programs at graduate recruitment fairs, by email, print or digital marketing campaigns. "I also plan and host all graduate program events including open house, orientation, WoW (Week of Welcome) events, professional development seminars, and anything else that pops up under 'other duties as assigned'.

"I love UAH. I enjoy recruiting students to the university because I truly believe UAH is a wonderful university and students will receive a great education," Maloney said. "It's fun to watch their progress. I get to meet them at the beginning of their UAH journey, and then see them at the end during graduation - a successful relationship from start to finish!"

She has plenty of funny stories to share about her interesting job, but one really stands out. During recruitment season, it is easy to work 15 hour days crisscrossing the state in search of graduate students. One night at approximately 10 p.m., Maloney received a phone call from Berkowitz informing her he just arrived at his hotel only to discover he left his UAH recruiting kit at home. "There was a brief pause... and then he asked if I could get another one and meet him half way, somewhere outside of Birmingham. I had a good laugh and then I realized he was serious! Luckily, he discovered extra marketing materials in his car and didn't need me to make the trip. Recruiting will make you a little crazy with all the traveling and we certainly laugh about that memory now."

Maloney is excited and humbled by the nomination for the UAH Foundation Award. "We all spend a large portion of our lives at work, so it's especially nice to be valued by the people you work with on a daily basis. David and Jennifer Pettitt's nomination means a great deal to me because I regard them as two reasons why UAH is such a great university. To know they thought I was worthy of recognition makes the award mean so much more to me." Maloney seems to be on a roll when it comes to professional accolades, in January the UAH Minority Graduate Student Association presented her with a Martin Luther King, Jr. Award.

Maloney enjoys spending time with her husband, seven year-old daughter and five year-old son. She expects to complete her MBA in 2018. 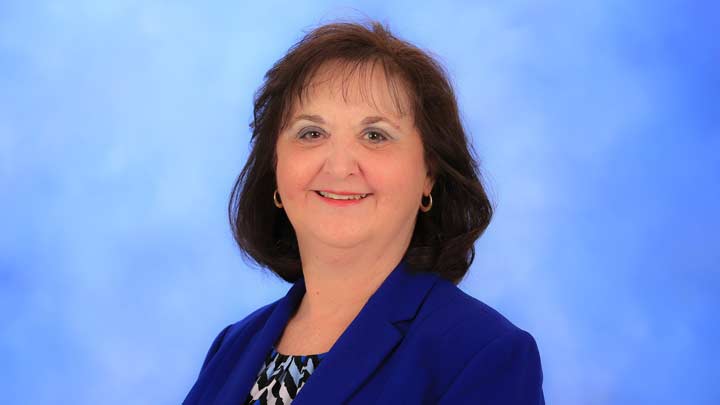 In 1994, the U.S. life expectancy was 75.7 years, the number one song was "I Will Always Love You," and it was a Mighty Morphin Power Rangers frenzy as parents from coast to coast searched for the hottest toy. It was also the year that Cecille 'Cil' Spina began her employment at UAH in the Records Department. "It was a very busy office and at that time grade sheets were hand-delivered so we got to know all the faculty on campus."

From the Records Department Spina moved to the Health and Physical Education Department directed by Dr. Joe Manjone. Her duties there included administrative tasks, and crafting contracts for tours to Switzerland, China, Bulgaria, Greece, Russia, Italy, and Spain. In spring 1997, Spina moved to the Department of Music as Staff Assistant with Dr. David Graves. Currently she serves as Senior Staff Assistant to Dr. C. David Ragsdale, Chair of Music.

Spina's duties include coordinating all administrative functions of the department. "Much of this position is financial in nature including payroll, contracts, and working with vendors, but my favorite part is working with our students," she said. "I know all of our majors very well since I register them for classes, prepare their recital programs, and advise them on their programs of study."

With nearly 25 years of employment on the shelf, Spina has countless humorous stories she could share with the university community. One story easily comes to mind. Her old office was a small cramped room on the second story side of Roberts Hall. Directly across the hall was a small closet that contained a utility sink. "During my lunch break I took voice lessons with Charlotte Regni, who lived on a farm. One day Charlotte had to bring a baby fainting goat with her to bottle feed. She asked Spina to hold "the baby" while she went to her car to get a bottle. While Spina was holding the baby goat, nature called. She handed "the baby" back to Charlotte and proceeded to clean her blouse in the utility sink. "As I stepped out in a completely soaked blouse Dr. Graves asked 'what happened'? I mumbled, the goat…but before I could finish the sentence he shook his head, started walking away and said, 'I don't want to know anymore'."

In receiving the award, Spina said, "There are so many deserving staff members on this campus. It is an honor to be nominated, but to actually receive the award is quite humbling."