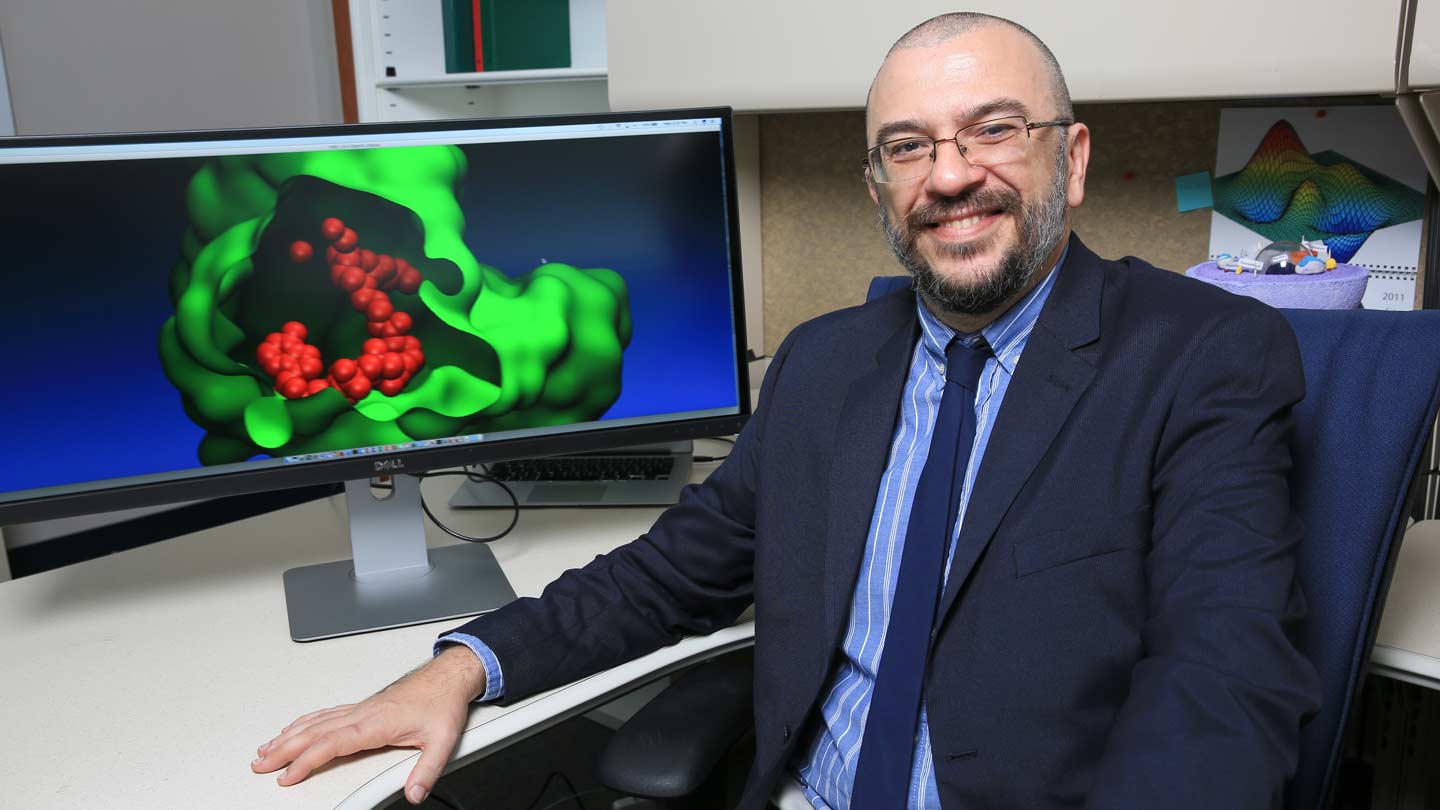 Dr. Jerome Baudry ideally wants to join a high-performance computer cluster in his lab with the Alabama Supercomputer Center in Huntsville to support virtual testing by SUMMIT, the fastest supercomputer in existence.

A professor in the Department of Biological Sciences at The University of Alabama in Huntsville (UAH) is part of an effort led by Oak Ridge National Laboratory (ORNL) in Tennessee that applies the power of supercomputers to screen compounds for effectiveness against the pandemic COVID-19 virus.

Dr. Jerome Baudry, the Mrs. Pei-Ling Chan Chair in the Department of Biological Sciences, says his lab in UAH’s Shelby Center for Science and Technology is involved in applying ORNL’s SUMMIT, the most powerful supercomputer on the planet, to examine existing compounds that may have COVID-19 efficacy.

"We have several daily teleconferences with all of us involved, and that’s about 30 people so far. It is a non-stop effort, pretty much 24/7," Dr. Baudry says.

"We are at this point focusing on repurposing existing drugs," he says. "That is, to take existing drugs from the shelf and find which ones are active against either the virus itself or can help in treating or mitigating the effects of infection in the severe cases."

Compounds under review include drugs already available with safe profiles, as well as natural products. Compounds identified as possible future drugs will also be studied. In the initial stage, no new drugs will be under development.

"But what we can do computationally is to look at the entire proteome of the virus," Dr. Baudry says. "We can use high performance computers and supercomputers to look at the entire genome of the virus, see everything the virus’ genome is making and build computational models of all these proteins, and repeat the repurposing process for each of these proteins."

Scientists in the group are starting with some proteins on the surface of the virus in an effort to prevent it from infecting human cells.

"We are also looking at some of the proteins that allow the virus to replicate itself when it is inside the human cell in order to block this process, a bit like for many anti-AIDS drugs," Dr. Baudry says. "But we will expand to pretty much everything in the virus’ genome that can be targeted by a drug."

The research group is its early stages but SUMMIT has performed the first calculations.

"We can perform a few millions of these virtual screening calculations per day on this kind of machine," Dr. Baudry says. "Now we are expanding this computational effort and we are going to use ‘all hands on deck’ by using some of our UAH computers, as well."

In the Baudry Lab, a high-performance computer cluster built in collaboration with UAH’s Office of Information Technology will perform several thousand virtual screenings per day.

“We do have the expertise at UAH, in particular in my lab. I am working with a senior researcher in my lab, Dr. Kendall Byler, who is also very experienced in this field,” he says. "And we do have good computational resources at UAH that we can mobilize for this effort."

Alabama’s biotech industry, particularly in North Alabama, has all the expertise that may be needed, Dr. Baudry says.

That would allow the group’s researchers to use ORNL’s giant computer to generate the very heavy calculations and then sub-calculations could be performed on UAH and Alabama high-performance and supercomputers.

Supercomputing lets the scientists process a given compound computationally in a couple of minutes.

"That’s about the time it takes to look at a possible drug and calculate, computationally, if this possible drug can stick to one of the proteins of the virus," Dr. Baudry says. "If our calculations suggest that it could, we identify it as one of the compounds that we pass on to the groups that will be doing the experimental testing. And we repeat that for many of the virus proteins, and many different shapes of these proteins."

The process would take several hundred years to perform without supercomputing and cost billions of dollars.

"On supercomputers, we can cut that down to about six months," Dr. Baudry says. "But our colleagues who perform the experimental tests can start as soon as we give them interesting molecules to test so we don’t have to wait six months to start suggesting good drug candidates."

Experimental researchers will be immediately notified each time the supercomputing group finds a potential drug candidate without waiting for the many other millions of calculations to be performed on the other drug candidates.

"Since we are working with virtual molecules and virtual viruses, we are not in danger of being infected," he says. "Our collaborators in Memphis who will be doing the experimental testing down the road are of course well-equipped to work safely."

Researchers begin with databases created about existing drugs, natural products or molecules that may not have been tested yet as drugs. There are thousands of them. Then they build virtual models of these compounds using the laws of physics and chemistry to calculate their composition and arrive at a very detailed computational description.

"Then we look at the virus’ genome," Dr. Baudry says. "We have to build models for all the virus’ proteins, again describing all the atoms, their properties, how they move together, etc."

At that stage the supercomputers step in to compute how the atoms of a possible drug will interact with the atoms of the virus’ proteins.

"It’s like doing a test tube experiment to see if a possible drug will bind to the protein, except that we perform this in a virtual test tube using our computers," he says.

Prior to joining UAH, Dr. Baudry spent 10 years at the University of Tennessee-Knoxville and ORNL in the Center for Molecular Biophysics that is leading this effort. While there, he developed and co-developed many of the computational tools that are used in giant virtual screening calculations.

"Dr. Jeremy Smith, the lead there, invited me to join on this project since I was very familiar with the processes involved, and I of course accepted," Dr. Baudry says. "It is a great team and we all work very well together."

In these early stages, ORNL and other members are relying on their individual internal operating funds for the effort.

"ORNL is applying for its own internal Department of Energy funding, but that will only go for ORNL groups," says Dr. Baudry. "We will all apply together for further funding, either individually or collectively, or both."