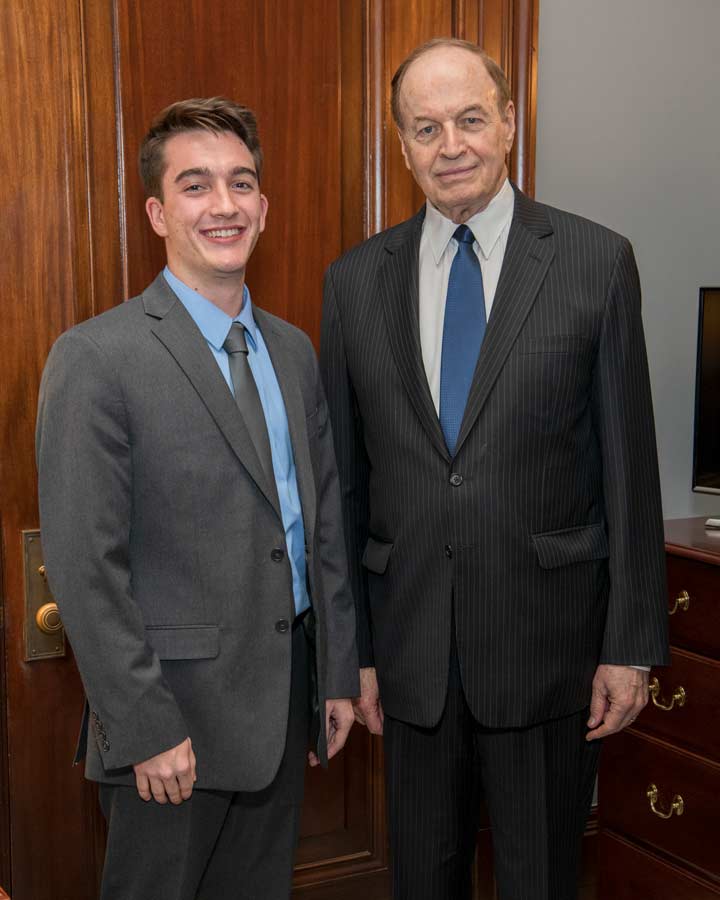 Junior political science major and Huntsville native A.J. Brien completed an internship in U.S. Senator Richard Shelby’s Office as part of the Congressional Internship Program, which is open to students who exhibit an interest in government and public service.

A.J. Brien, a junior political science major at The University of Alabama in Huntsville (UAH), spent part of his summer as an intern for U.S. Senator Richard Shelby (R-Ala.) in his Washington office. In addition to attending hearings on behalf of the office and answering constituent phone calls, Brien led numerous constituent tours of the U.S. Capitol and assisted Alabamians with various requests.

"A.J. Brien was a huge help to my office and the people of Alabama during his time as an intern here in Washington," says Senator Shelby. "Participating in the Congressional Internship Program gives students interested in government and public service a unique opportunity to experience the day-to-day workings of Capitol Hill while learning about our nation’s legislative process. I am grateful for A.J.’s hard work and know he has a bright future ahead of him."

As the internship coordinator for UAH’s Department of Political Science, Dr. Anne Marie Choup kept in constant touch with Brien over the course of the internship, discussing ways in which the ideas and themes covered in his political science classes applied to the work he was doing in the Senator’s office. "I’m very glad that A.J.’s internship was so successful and rewarding for him," says Dr. Choup. "He put a lot of work into both setting this up and while on site in D.C., and it paid off."

A Huntsville native, Brien is also a participant in UAH’s Joint Undergraduate Master's Program, giving him a head start on earning his master’s degree in business administration. Outside of his studies, he serves as the director of outreach for UAH’s Student Government Association and as a student ministry small group leader at Mount Zion Baptist Church.

I thoroughly enjoyed serving Senator Shelby’s constituents and listening to their needs.

"Having the opportunity to serve Senator Shelby and his staff for the last month has been one of the biggest blessings of my life," says Brien, who hopes to find an opportunity in foreign relations intelligence either in Huntsville or Washington, D.C. upon graduation. "Whether I was completing tasks such as writing memos or researching legislation, his office made me feel like my work was important and that I was contributing to the team. The experience that I have gained over the past couple of weeks will shape my future in ways that I cannot describe. I am excited to take what I have learned back to Huntsville and my campus. I thoroughly enjoyed serving Senator Shelby’s constituents and listening to their needs, and I am extremely thankful for the opportunity to spend a month in Washington interning for Senator Shelby."