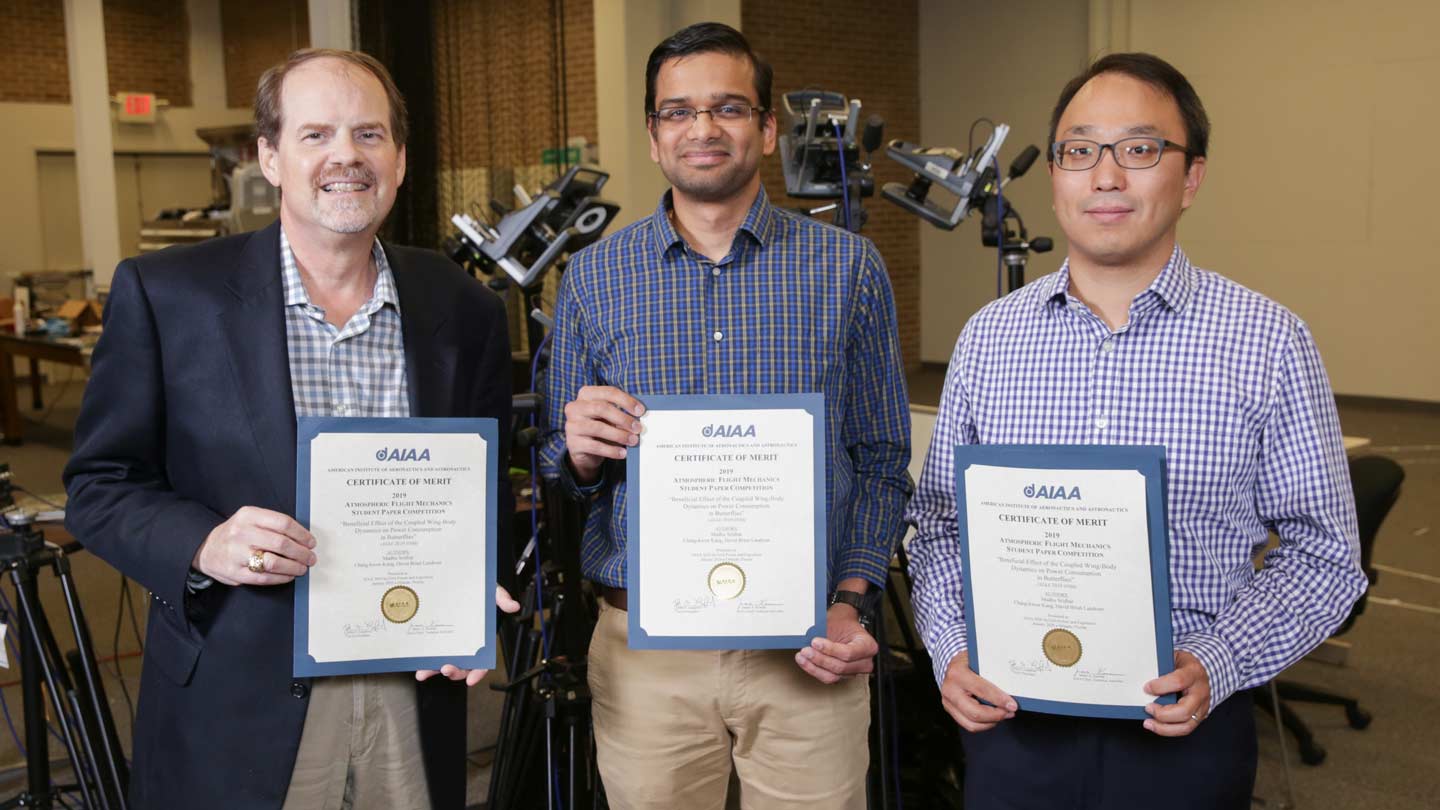 In a finding that could benefit drone design, award-winning research by a doctoral student at The University of Alabama in Huntsville (UAH) shows that the undulating flight paths of Monarch butterflies are actually more energy efficient than a straight-line path.

Madhu Sridhar’s paper won the 2019 AIAA Atmospheric Flight Mechanics Graduate Student Paper Competition and he was awarded at the 2020 AIAA SciTech Forum held recently in Orlando, Fla. The AIAA Scitech Forum is the largest annual aerospace conference and focuses on research and technology findings in the aerospace community. The 2020 AIAA SciTech Forum included more than 2,500 technical presentations with over 5,000 participants.

Sridhar modeled and analyzed the power consumption of Monarch butterflies while working in UAH’s Autonomous Tracking Optical Measurement (ATOM) Laboratory under Dr. Chang-kwon Kang, an associate professor in the Department of Mechanical and Aerospace Engineering, and Dr. Brian Landrum, an associate professor and the associate chair of the Department of Mechanical and Aerospace Engineering. The research was supported by funding from the National Science Foundation.

The finding that an undulating flight trajectory consumed less energy can be valuable in the bio-inspired design of long-range robotic miniature drones.

"One of the underlying goals of our study is to develop a drone that can fly as long as a migrating Monarch," Sridhar says. "The annual migration of Monarch butterflies is the longest among insects. It can be 3,000 kilometers long! Even the state-of-the-art drones cannot show these long ranges."

Researchers used a simplified analytical butterfly model in the study, focusing on the dynamic interplay between the wing aerodynamics and body dynamics, says Sridhar, who is from Bangalore, India.

"This paper shows that this model agrees reasonably well with experimental data," he says. "We used motion-tracking cameras to record a series of flight trajectories and wing and body motions of freely flying Monarch butterflies in our ATOM Lab."

If there are advantages to the undulating trajectory that butterflies use, why don’t bees or flies use it?

"This study shows that the coordinated wing and body motions following a bumpy trajectory require lower power for a flapping wing at the Monarch scale," he says. "For smaller insects this power benefit reduces, which is probably why they fly on a straight trajectory."

Whether butterflies utilize a biologically predetermined pattern of flight or simply random undulations is one of many questions for future research. Sridhar is also looking into how the butterflies select flight altitudes.

"Monarchs are known to fly at different heights from ground level along their migration route, which we find very interesting," he says. "We do not know why they choose to fly higher instead of at ground level heights."

"So, to test this, we have performed experiments with Monarch butterflies inside the large vacuum chamber at UAH Propulsion Research Center, where we recorded the flights at lower density air up to 4,000 meters above sea level," Sridhar says. "This helps us in observing how their wing and body motions change as the air density is lowered."