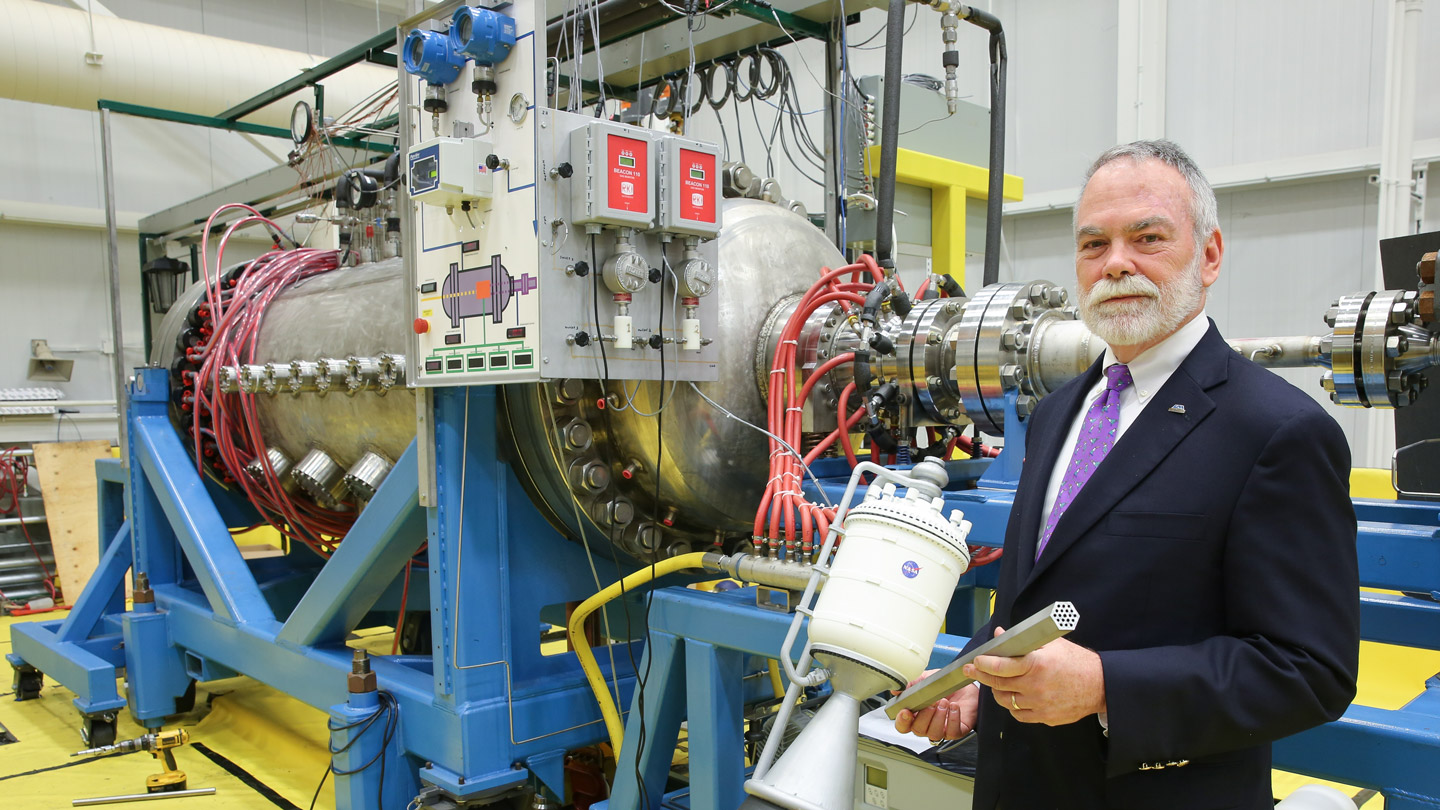 Successful human spaceflight to Mars and back is bound by basic rules of physics that any home garage hot rodder knows: mass, power and fuel consumption. To complete the mission, there must be enough thrust to propel a spacecraft’s weight to the target destination and enough fuel economy to ensure there is adequate propellant.

Nuclear thermal propulsion (NTP) can help achieve the goals of low weight, high power and good economy. An NTP engine uses low enriched uranium (LEU) to heat a lightweight propellant such as liquefied hydrogen to 2,800 degrees Kelvin through channels in the core. The expanding gas exits the nozzle, providing thrust. If something goes awry and the craft crashes to Earth, the engine design and use of LEU reduce the chance of a catastrophic nuclear incident to near zero, as well as making flight safer for the crew.

NASA studied nuclear propulsion early on with the roughly two-decade long Nuclear Engine for Rocket Vehicle Application (NERVA) program that ended in 1972. Current NTP research can be viewed as a modern-day progeny of NERVA.

"The heartbeat of the program at this time is demonstrating that the reactor elements can be manufactured such that they will function in and survive the intense environment internal to the engine," says Dr. Dale Thomas, UAH’s eminent scholar in systems engineering, who is the principal investigator for a UAH research grant with NASA’s NTP Program Office.

As all hot rodders know, swapping engines can pose technical challenges. That’s why NASA has a research grant with The University of Alabama in Huntsville (UAH) to model how a spacecraft might be engineered to work with NTP, en route to an eventual test flight. NASA is currently focused on determining the feasibility and affordability of an LEU-based NTP engine with solid cost and schedule confidence. The space agency has started looking into a potential flight demonstration as a follow-on project in the mid-2020s.

UAH’s Propulsion Research Center (PRC) manages the university’s role in the project. The university’s Complex Systems Integration Laboratory in its Rotorcraft Systems Engineering and Simulation Center (RSESC) is working closely with MSFC and private contractors to solve the challenges and exploit the opportunities created by a nuclear reactor at the heart of a rocket engine.

"We’re trying to figure out – assuming you can make the engine – can we fit it to the vehicle and make it work," says Dr. Thomas, who incidentally is swapping engines to hot rod a classic pickup truck at home.

UAH’s research focus is not on the reactor design, but rather on modeling the spacecraft during a human mission to Mars.

NTP is such a radical departure from liquid fuel rockets that even the NASA phrase "We have ignition" becomes obsolete because the propellant isn’t burning. The crew will be shielded from the LEU in the reactors and will "get more radiation from deep space than from this engine," Dr. Thomas says. Yet the reactor poses other design challenges.

One of the first problems that NASA asked UAH to research is the heating effect that the NTP engine’s gamma ray and neutron emissions will have on the hydrogen stored in the propellant tanks.

"Hydrogen, which must be in its liquid state to be used as NTP propellant, must be chilled to near absolute zero," Dr. Thomas says. "And it turns out that hydrogen is a great absorber of neutrons, and a good absorber of gamma rays."

As the hydrogen absorbs the particles, heat is generated.

A team led by Dr. Jason Cassibry, associate professor of mechanical and aerospace engineering, is modeling the behavior of the hydrogen in the system with the goal of keeping it liquid until the precise time it is to be expended.

"Storing hydrogen on a mission for months at a time is difficult, and every little thing that heats up the hydrogen is a problem," says Dr. Cassibry.

His computer modeling explores the impacts of variables such as the craft’s trajectory and the design of the hydrogen tanks.

"Downstream of the reactor, we’re modeling the flows of hydrogen and using those to validate the data against the results from the NERVA rocket development in the ’60s and ’70s," Dr. Cassibry says. "We’re looking at the fuel economy and the thrust that comes out of the cone."

The initial modeling is being done at full power, but Dr. Cassibry expects that in a year or two, the team will begin to model the throttling process.

The stack of an NTP rocket begins with the nozzle, where liquefied hydrogen undergoes rapid expansion. Next up is the nuclear reactor, supplying heat to the nozzle. The reactor will only be powered up once conventional rockets have lofted parts of the craft into space so it can be assembled there. While on Earth, the reactor is in safe mode. Atop the reactor is the hydrogen storage, and atop that is the crew module.

Very cold and very light, liquid hydrogen is also a viscous fuel that can be hard to pump and utilize. UAH is investigating whether injection seeding the hydrogen with a noble gas such as argon would make it flow better. However, the argon seeding will affect engine performance.

"In rocket terms, you talk about specific impulse. How much energy can you get out of a fuel?" Dr. Thomas says. "When an engine is running hydrogen, it has one thrust level. If you seed it with argon, it generates more thrust, but at less efficiency."

The researchers are investigating whether seeding improves thrust enough make up for the loss of efficiency, while at the same time conferring the benefit of better fuel flow.

NTP engines generate high thrust at over twice the specific impulse of the best chemical combustion engines. They also provide engineers with new opportunities for innovation.

"That’s why NASA brought us onboard, to explore opportunities and to kind of look off into the distance to see what might be accomplished," says Dr. Thomas.

One possibility that would appeal to a hot rodder: Add a conventional combustion component to the nuclear engine. Adding an oxygen tank to create an afterburner that ignites the hydrogen coming out of the nozzle could significantly boost thrust when needed.

Another intriguing opportunity lies in the reactor’s waste heat.

"When you look at it, a Mars spacecraft is going to require a big solar array to get its power, and that creates design challenges of its own in weight and strength," Dr. Thomas says. "Plus, the farther away you get from the sun, the less efficient those arrays are going to be."

Because it’s difficult to turn the reactor off and on due to the thermal effect on its materials, it has to idle when not in use. While idling, the reactor continues to generate heat. Perhaps hydrogen can be directed through the core to carry that heat to radiators coated with a thermoelectric compound that generate electricity, Dr. Thomas suggests. Or the heat could be used to run a mechanical generator.

"If we tap the power off the reactor, we may be able to do away with the array," he says.

Exploring these kinds of design challenges and opportunities attracts graduate students to UAH from universities across the country, according to Dr. Thomas.

"It’s amazing, the team we have been able to build," he says.

"My attraction to NTP research stems from the understanding that, from a technical standpoint, nuclear thermal propulsion is hands-down the best way to get humans to Mars in my lifetime," Rawlins says. Because of their orbits, the energy required to travel from Earth to Mars reaches minimum expenditure every 16 years. The next opportunity is in 2033.

"We got to the moon in 8 years, so this is definitely possible, but it'll require making sure we play our cards right," Rawlins says.

"That's what's so exciting about working with Dr. Thomas on my research within the Complex Systems Integration Laboratory," she says. "We're using systems engineering to look ahead, question our current process and identify potential solutions or alternatives before they even become an issue."

It’s the UAH team’s job to smooth the path for NASA to help it get to Mars, Rawlins says.

"With this research, it feels great to contribute to the next ‘giant leap for mankind,’ sending humans to Mars," says Nikitaev. "The most challenging task is figuring out how to make all the components work together in a high fidelity NTP engine simulation."

Being able to intellectually dream about possibilities "is one of the very best things I like about being at UAH," says Dr. Thomas, who joined the university in 2015 after being associate center director (technical) at MSFC.

"What we’re doing here has wider implications for other areas," he says. "NTP moves the ball on Dr. Cassibry’s work on PuFF (the Pulsed Fission-Fusion engine). It could even lead to a single stage to orbit engine."

A hybrid NTP single stage to orbit engine could lead to resurrection of a program similar to Lockheed Martin’s X-33, a NASA Reusable Launch Vehicle (RLV) test bed that was scheduled to fly 15 suborbital test hops before it was cancelled in 2001.

"There’s potential to come up with an air breathing engine in the thick atmosphere," Dr. Thomas says, "and then use nuclear power once we get out of the atmosphere."