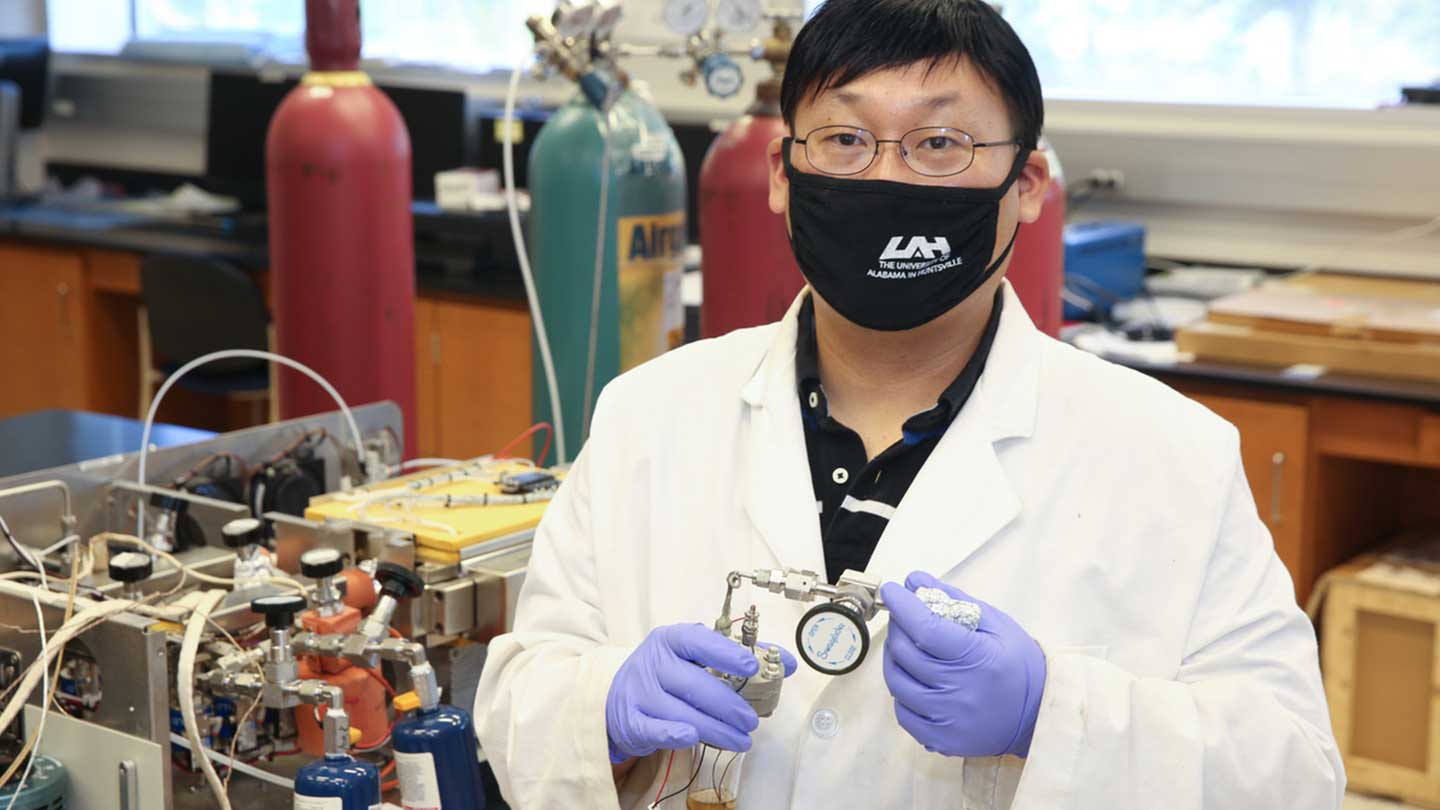 While observing how a home humidifier works, Dr. Moonhyung Jang got the idea to use an ultrasonic atomization technology to evaporate chemicals used in atomic layer deposition and worked with Dr. Lei to develop and test the device.

UAH postdoctoral research associate Dr. Moonhyung Jang got the idea to use an ultrasonic atomization technology to evaporate chemicals used in atomic layer deposition (ALD) while shopping for a home humidifier.

The invention was created and tested in the UAH lab of Dr. Yu Lei, who says it will open a new window to many ALD processes.

Dr. Jang works in the laboratory of Dr. Yu Lei, an associate professor in the Department of Chemical Engineering. The pair have published a paper on their invention that has been selected as an editor’s pick in the Journal of Vacuum Science & Technology A.

Each ALD cycle deposits a layer a few atoms deep. An ALD process repeats the deposition cycle hundreds or thousands of times. The uniformity of the thin films relies on a surface self-limiting reaction between the chemical precursor vapor and the substrates.

While browsing online for a safe and easy-to-use home humidifier, Dr. Jang observed that humidifiers on the market use either direct heating at high temperature or ultrasonic atomizer vibration at room temperature to generate the water mist.

"Moon suddenly realized that the latter could be a safe and simple way to generate vapors for reactive chemicals that are thermally unstable," says Dr. Lei.

"The next day, Moon came to discuss the idea and we designed the experiments to prove the concept in our research lab. The whole processes took almost a year. But the great idea came to Moon like a flash."

ALD processes typically rely on heated gas-phase molecules that are evaporated from their solid or liquid form, similar to room humidifiers that use heat to vaporize water. Yet in that ALD process, some chemical precursors are not stable and can decompose before reaching a sufficient vapor pressure for ALD.

"In the past, many reactive chemicals were considered not suitable for ALD because of their low vapor pressure and because they are thermally unstable," says Dr. Lei. "Our research found that the ultrasonic atomizer technique enabled evaporating the reactive chemicals at as low as room temperature."

The UAH scientists’ ultrasound invention makes it possible to use a wide range of reactive chemicals that are thermally unstable and not suitable for direct heating.

"Ultrasonic atomization, as developed by our research group, supplies low vapor pressure precursors because the evaporation of precursors was made through ultrasonic vibrating of the module," Dr. Lei says.

"Like the household humidifier, ultrasonic atomization generates a mist consisting of saturated vapor and micro-sized droplets," he says. "The micro-sized droplets continuously evaporate when the mist is delivered to the substrates by a carrier gas."

The process uses a piezo-electric ultrasonic transducer placed in a liquid chemical precursor. Once started, the transducer starts to vibrate a few hundred thousand times per second and generates a mist of the chemical precursor. The small liquid droplets in the mist are quickly evaporated in the gas manifold under vacuum and mild heat treatment, leaving behind an even coat of the deposition material.

"Using the room-temperature ultrasonic atomization reported by our manuscript, new ALD processes could be developed using low volatility and unstable precursors," Dr. Lei says. "It will open a new window to many ALD processes."

The research was sponsored by the Department of Defense, the National Science Foundation and NASA’s Established Program to Stimulate Competitive Research. The inventors are seeking a patent through UAH’s Office for Technology Commercialization.