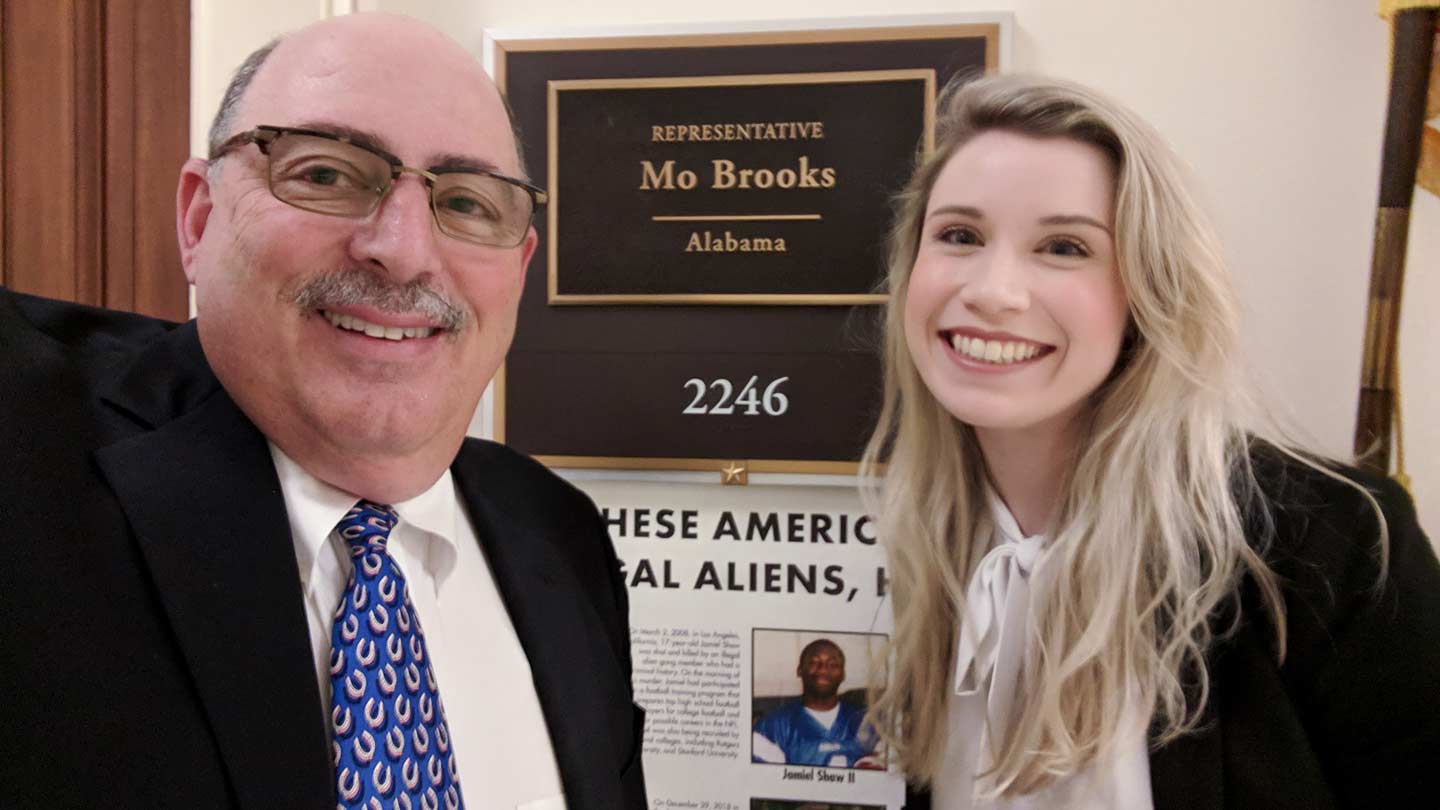 Dr. David Berkowitz, dean of UAH’s Graduate School, and Erin Wright, then master’s candidate in UAH’s Department of Political Science, attended the Council of Graduate Schools’ Advocacy Day, where they met with Senate and House representatives to advocate for support of graduate education, research, and scholarship.

Given her professional aspirations to become a policy maker, it seems all but inevitable that Erin Wright will one day end up in Washington, D.C. So she was thrilled to be invited on a trip to the nation’s capital last month to attend Advocacy Day on behalf of the Council of Graduate Schools (CGS), giving her a sneak peek into what a future in politics will entail. "I was nervous, but I enjoyed it a lot," says Wright, who recently graduated with her master’s degree in Public Affairs and Policy from the Department of Political Science at The University of Alabama in Huntsville (UAH). "We met with representatives to put forth the policies that CGS and UAH are focused on."

Advocacy Day, despite its name, actually comprises two days. The first is dedicated to training participants on effective strategies to advocate for graduate education, research, and scholarship, while the second consists of back-to-back meetings with House and Senate offices of both parties to present CGS-prepared requests. "We dealt with every situation they had trained us for – people who were pressed for time, people who had tough questions, people who were not friendly," says Wright. "We had four meetings, but after the first one, it got a lot easier!"

In the past, attendance had been limited to members of the CGS’s Board of Directors and its Advisory Committee on Advocacy and Public Policy. But because graduate students were invited to take part in this year’s event, Wright was able to accompany the dean of UAH’s Graduate School, Dr. David Berkowitz, at the suggestion of Dr. John Pottenger, chair of the Department of Political Science and with the financial support of the university. "Dr. Berkowitz brought up the fact that we get a lot of research funding from NASA and the Department of Defense because of our location, while I gave my own personal views as a graduate student," says Wright.

While on Capitol Hill, the pair also took advantage of the opportunity to meet with a D.C.-based UAH alumna, Tammy Paltchikov, who serves as the Public Diplomacy Desk Officer for the Russia Office of Public Diplomacy at the Bureau of European and Eurasian Affairs. "Ms. Paltchikov discussed her career path in the U.S. Department of State after she graduated with her master’s degree under Dr. Pottenger," says Dr. Berkowitz. "This helped to illuminate another career path for public policy." 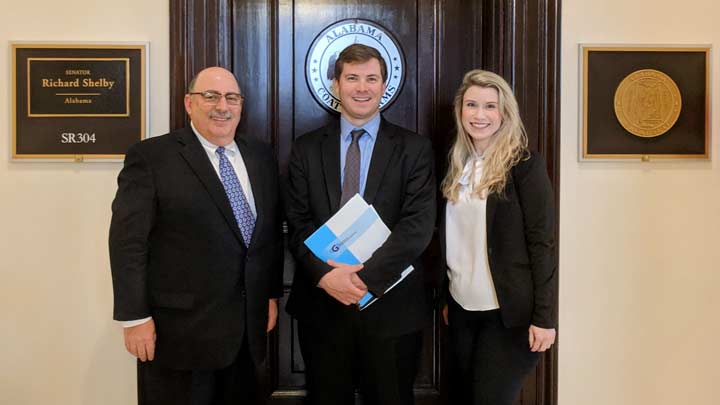 Dr. Berkowitz and Wright meet with a representative from Senator Richard Shelby’s office on Capitol Hill.

Indeed, it’s one Wright herself is considering, given her childhood spent overseas. "Even though I was born here, I grew up in Kuwait, because my dad works in oil," she says. "That gave me a sense of cultural awareness and a perspective that is not as common as it should be." And though she ended up returning to the U.S. to earn her bachelor’s degree at the University of Arkansas, she did so in a field that would allow her to capitalize on her international background and her proficiency in Arabic. "I majored in cultural anthropology and Middle East studies and minored in Arabic at the university’s King Fahd Center for Middle East Studies," she says.

A year after graduating from the U of A, she relocated to Huntsville to be closer to family and to pursue a master’s degree from UAH. "I felt it would be a natural progression as I had been interested in politics and policy, but hadn’t taken a lot of political science classes," says Wright. Somehow, between earning an International Security Policy certificate and writing a capstone research paper on the racially disparate impact of Alabama’s voter identification law, she also found time to intern for Walt Maddox’s 2018 gubernatorial campaign as a field coordinator for the state’s 12 northernmost counties. "I’m not only a people person, but I also especially enjoy the fast pace of campaigning," she says. "I feel like I excel in that type of environment."

As for whether she’d be willing to put those soft skills to use on a campaign of her own one day, she demurs. "I’m interested in politics, but I don’t know if I’d ever run for office," she says. "I’d like to focus on getting involved with organizing at a lower level and then maybe go into policy making." After all, if her experience advocating on Capitol Hill has taught her anything, it’s that what happens behind the scenes is just as important as what happens center stage. "I want to be inspired by my work and feel like I’m making an impact," she says. "And it’s inspiring when people are genuinely advocating for a worthy cause or a cause they believe in."