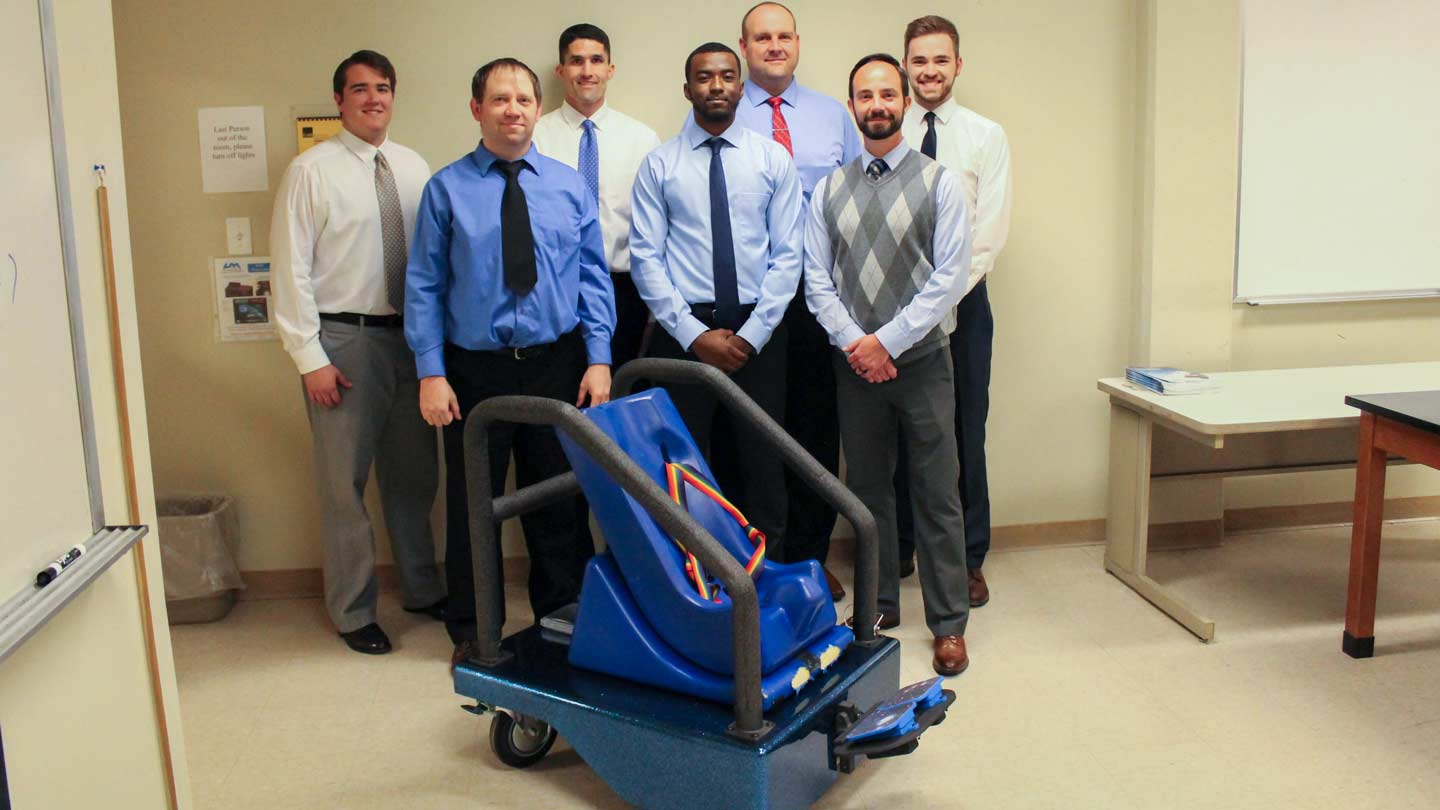 The RISE Assistance Device (RAD), which will provide independent mobility to a RISE student with cerebral palsy, was designed and built by a team seven mechanical and aerospace engineering majors at UAH.

Just over a year after moving onto the campus of The University of Alabama in Huntsville (UAH) in 2013, the RISE School became an official service and outreach unit of the UAH’s College of Education. Now, however, those professional ties have become more personal, thanks to a team of seven mechanical and aerospace engineering majors in Dr. Christina Carmen’s Engineering Design – Product Realization course.

Last month, the UAH seniors presented four-year-old Toga Obembe, a care-dependent RISE student with cerebral palsy, with a custom-made independent mobility device that he can use to move independently and safely around his classroom. "We were all so very excited to see him use it for the first time," says team member Greg Duke, who has since traveled to Puerto Rico to present a paper on the device to the American Society of Engineering Educators. "Some tears of happiness may have been shed by various parties!" 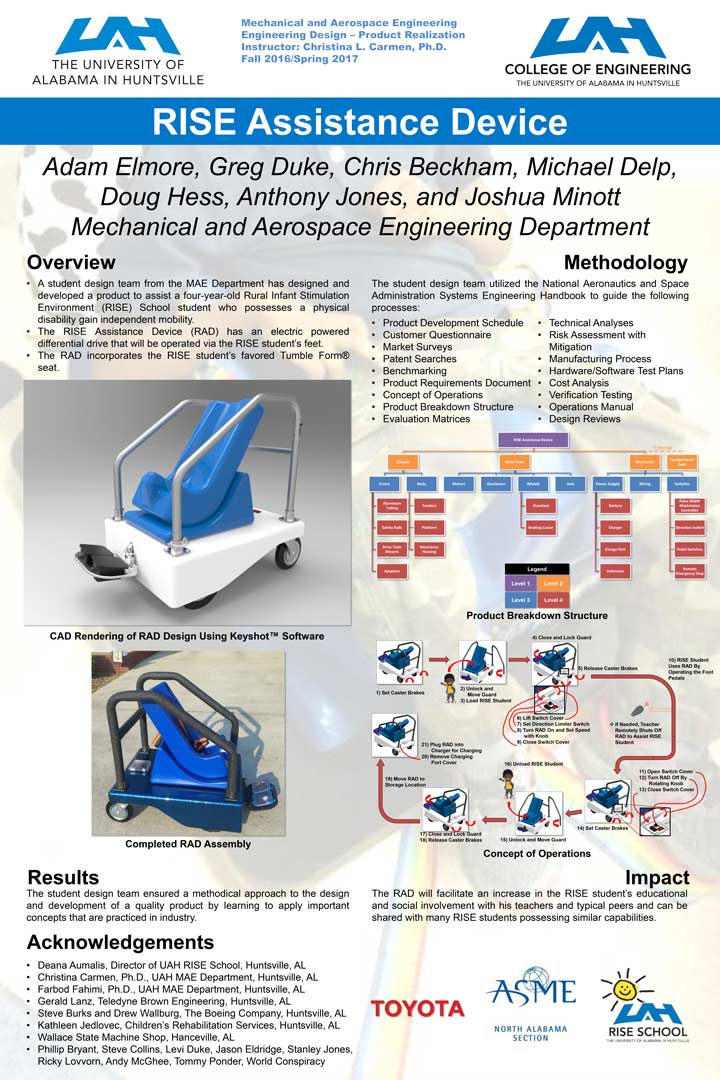 This is not the first time Dr. Carmen has offered her students the opportunity to apply their engineering skills and knowledge to more philanthropic, community-oriented projects. Two years ago, for example, a team in her class designed and built a display cart for use at children’s science center Sci-Quest. And last year, one designed and built a dyslexic brain display to serve as an outreach tool for visitors to Greengate, a local private school for children with dyslexia.

"These projects are so beneficial for all involved, and students flock to ones that enable them to significantly impact the life of a child with disabilities," says Dr. Carmen. As for the RISE School project, it took shape when she reached out last spring to Deana Aumalis, director of UAH’s Early Learning Center, of which the school is a part. "I suggested the possibility of having UAH engineering students design and build needed products for her school, and Deana was thrilled."

The timing could not have been better either, as Aumalis was looking for a solution to a problem that had arisen over the last few months. "Toga’s classroom assistant from last year, Patty Everett, asked me if there was any type of device that would allow him more mobility, but I realized there was nothing on the market," she says, explaining that Obembe’s previous device comprised a tumble form adaptive positioning seat on top of a platform with wheels. "So when Dr. Carmen reached out to me, I realized it would be the perfect project for a senior design team."

After securing the necessary funding from Toyota USA and the North Alabama Section of the American Society of Mechanical Engineers, Dr. Carmen then pitched the RISE project to her class last August. Duke and six of his fellow classmates – Adam Elmore, Chris Beckham, Michael Delp, Doug Hess, Anthony Jones, and Joshua Minott – all jumped at the chance to help Obembe. "I liked all of the projects offered for various reasons," says Duke, "but this project had a special customer."

Their biggest challenge was finding a way to incorporate Obembe’s favored tumble form seat into a device that he would be able to operate independently yet safely. "Any time we build products that will be used by children, safety is always a top-level requirement," say Dr. Carmen. "Ergonomics was also particularly critical for the success of this particular product, as the team had to ensure that a specific child could physically and cognitively control the platform." 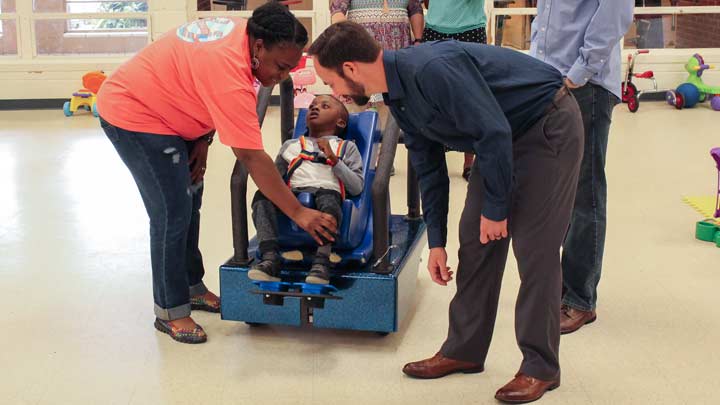 Thanks to the RAD, Obembe will be able to interact more easily with his teachers and neurotypical peers and engage more fully in educational and social situations.

They ended up deciding on an electric-powered chassis for the seat that could be operated by foot pedals, which they named the RISE Assistance Device (RAD). As they worked, the team frequently referred to the NASA Systems Engineering Handbook, which describes the processes, techniques, best practices, and pitfalls of designing and manufacturing a product. They also relied on valuable assistance from local subject matter experts, including Gerald Lanz of Teledyne Brown Engineering; Steve Burks of the Boeing Company; Drew Wallburg of Cummings Aerospace; Kathleen Jedlovec of Children’s Rehabilitation Services; Dr. Farbod Fahimi of UAH’s Department of Mechanical and Aerospace Engineering; the staff of the Wallace State Machine Shop; World Conspiracy Skate Shop; and Phillip Bryant, Steve Collins, Levi Duke, Jason Eldridge, Stanley Jones, Ricky Lovvorn, Andy McGhee, and Tommy Ponder.

But while help may not have been in short supply, time definitely was. "My entire team may agree with me when I say that we wish we had more time to make the RAD even better," says Duke. "There were many weekends I had to forego events with my wife to ensure that the quality of this project never suffered." Nevertheless, he adds, the time crunch "didn’t stop us from squeezing the most out of what we did have!" It also ended up forging stronger bonds between the teammates, teaching them how to communicate effectively while under pressure. "One of the best things about working on this project was the relationships that I built," says Duke. "I also improved my soft skills through my experiences with team dynamics and design reviews."

Of course nothing could top the moment when the students were finally able to present Obembe with the finished product. "It brought tears to my eyes," says Aumalis. "Toga was able to move forward using the footplate switches the first time he tried. And eventually, he’ll learn to turn right and left – all at a level to socialize with peers." Dr. Carmen was equally touched, calling it "an amazing and emotional day" and praising her students for their successful efforts. "I am so proud of them," she says. "This team of students was simply outstanding."

With the product now delivered, the team’s members understandably have their sights set on other, more timely considerations. For Duke, that means graduating and pursuing a full-time position in robotics before returning to UAH for his graduate degree. But while the project may be over, he feels certain that the experience of helping Obembe will last much, much longer for everyone involved. "No matter what career path I end up taking as an engineer," he says, "I will always remember the positive impact we made on this child’s life."