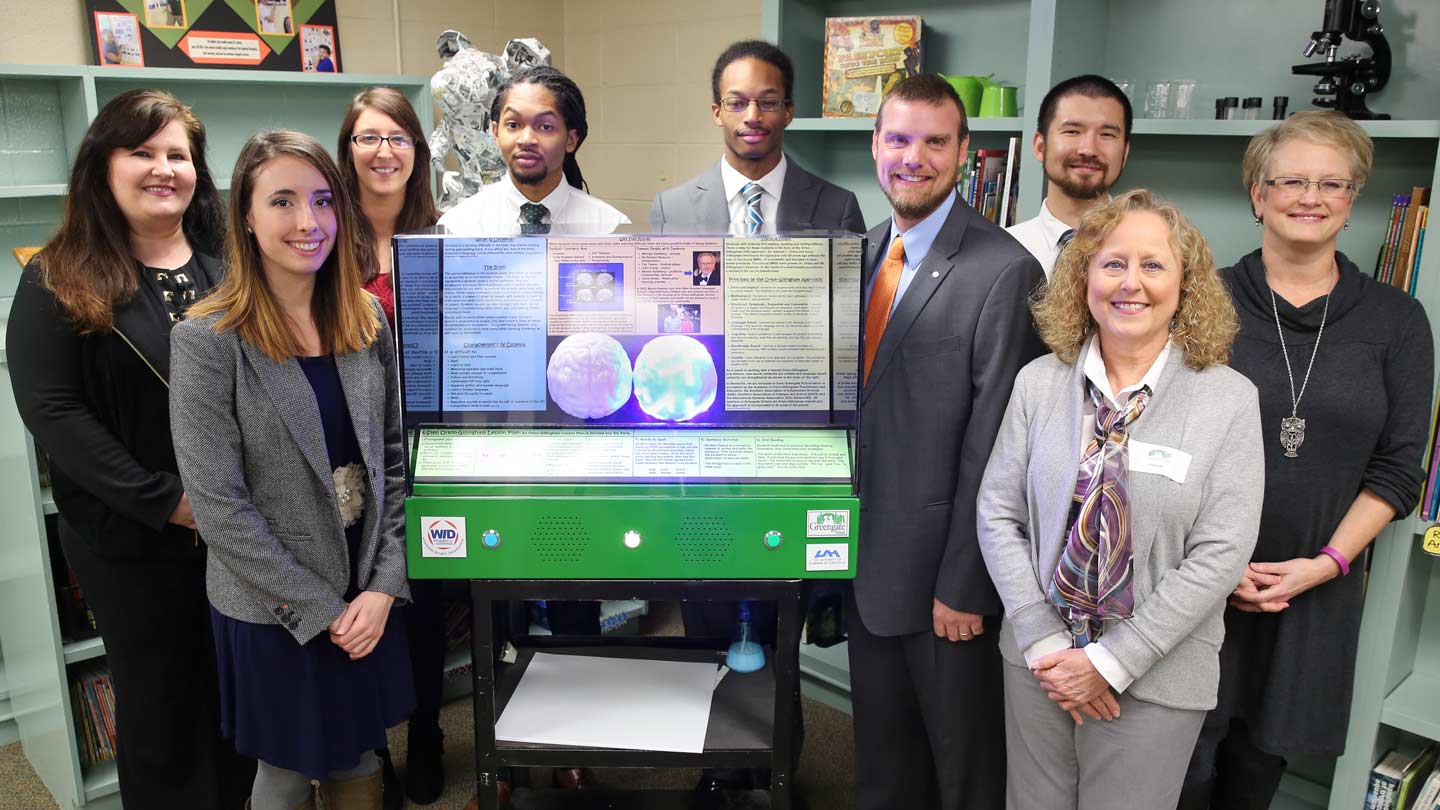 The Brainiacs, a team of mechanical engineering students from UAH, designed and built a Dyslexic Brain Display to serve as an outreach tool for visitors to Greengate, a local private school for children with dyslexia.

After watching her brother struggle with dyslexia throughout his academic career, Kacey Tyra knows the challenges faced by those who are affected by a learning disability. So when the senior mechanical engineering major was asked to select a project for her Engineering Design - Product Realization course at The University of Alabama in Huntsville (UAH), the choice was easy: a 3-D model of a brain that would serve as an outreach tool for visitors to Greengate, a local private school for children with dyslexia. "I thought about my brother and how, if he could have had a tool like this and the teachers knew more about dyslexia, his journey through school would have been more successful," she says.

Tyra was joined by several teammates, including fellow senior mechanical engineering major Matthew Calahan, who says he too was motivated by "a personal connection to someone with dyslexia." Over the course of two semesters, the team would be required to not only research and design the product, but also manufacture and test it before delivering it to Greengate. Step one, of course, was choosing a team name. "I gave us the name Brainiacs early in the design stage so we could have some unity and esprit de corps," says Tyra. "I also thought having a fun name would help bridge the gap between us and the kids who this product was essentially for."

The next step was narrowing down the requirements for the product. Because Greengate relies on the Orton-Gillingham method of teaching children with dyslexia, the school's primary focus was on contrasting the brain's behavior before and after Orton-Gillingham instruction. "We communicated with Greengate's staff and parents and did market research that would help us hone in on what we could come up with that was what they wanted," says Calahan. "And we used the NASA Systems Engineering Handbook to go through the design process."

Many parents said they found out about their child’s dyslexia so late, and that if only they’d had something like this they wouldn’t have wasted so much time trying to determine what the issue was.

As they worked, they also took into account the fact that the actual manufacture of the product would be constrained by both time and budget. "A lot of decisions had to be made based on pros and cons, time frames, and availability - something might be cheaper, for example, but it might be harder to get," says Calahan. "So we had to dig deep into each piece and then we'd do a matrix to determine the best choice and why. That way, when we went into the second phase, we knew we'd have a product we could build for the budget and time we had."

Several design processes later and the Brainiacs had what they felt was a workable plan for a final product - the Dyslexic Brain Display - that would meet Greengate's needs. "At the end of the first semester we had the completed required products document that stated everything we were going to give the customer," says Tyra. Once that received approval from Greengate, product sponsor Women in Defense, and course lecturer Dr. Christina Carmen, they were ready to begin building the display.

But having a workable plan and actually executing that plan proved more challenging than the Brainiacs could have expected. "There were many early mornings and many late nights," says Calahan. "More than 40 hours a week was devoted to this project on average. And just when you think you have it figured out then you hit another wall again!" Tyra concurs. "Once you figure out one thing you find two more things you don't know how to do," she says with a laugh. "The more you know, the more there is to know!"

Most of the time the Brainiacs could apply techniques they'd learned in the classroom, but some aspects of the project required them to teach themselves new skills. "We're just mechanical engineering students but we needed to know about electrical engineering and software engineering," says Tyra. "For one part we ended up using robotics techniques, which is not something we've had detailed instruction on. So a lot of it we'd have to research ourselves or talk to professors and other professionals in the industry."

They also had to document the process at every step, which ultimately led to the creation of a 229-page final report and a 30-page operations manual. "It's an eye-opening realization of what it means to be an engineer," says Tyra. But by the end, they couldn't have been more pleased with the result. "It came together 100 percent," says Calahan. "And our sponsor was blown away. She had confidence in the team from the beginning, but she had no idea we'd knock it out of the park."

The reception was equally positive when the Brainiacs assembled one last time to present the Dyslexic Brain Display to Greengate's staff and parents this past November. "I think more than any other praise we got, what I took away was the comments from the parents," says Calahan. "So many said they found out about their child's dyslexia so late, and that if only they'd had something like this they wouldn't have wasted so much time trying to determine what the issue was."

The Dyslexic Brain Display is designed to show a dyslexic brain’s behavior before and after Orton-Gillingham instruction.

Even more gratifying is the knowledge that its reach will extend far beyond Greengate's boundaries; the school plans to take it on the road and present it at conferences across the nation. "To know it will be displayed outside of the southeast and will enable other organizations to see that it's worth having something like this is great," says Calahan. And should it also lead to increased funding for Greengate, that may in turn mean more scholarships. "It could help students who couldn't normally go there," says Tyra.

As for the Brainiacs, they don't have to wait for the future to realize the benefits that working on the Dyslexic Brain Display has brought to their own lives. They can already clearly see the impact. "When you have the ability to take the theory you learn in the classroom and turn it into a product, you go to your job saying I can do this," says Calahan. "It pushes you hard but I think it's so worth it because you realize the classes you took mattered. Now I have the resources to follow through and be successful."

Tyra, meanwhile, can take comfort that her contributions may one day ensure that other students don't face the same struggles her brother did. "It was rewarding because we were dealing with real people. We weren't just building a valve for a rocket; we were reaching out into the community and making a difference," she says. "My brother is an adult now and has learned to deal with his dyslexia, but this will help other students with the disability develop into more successful members of society."