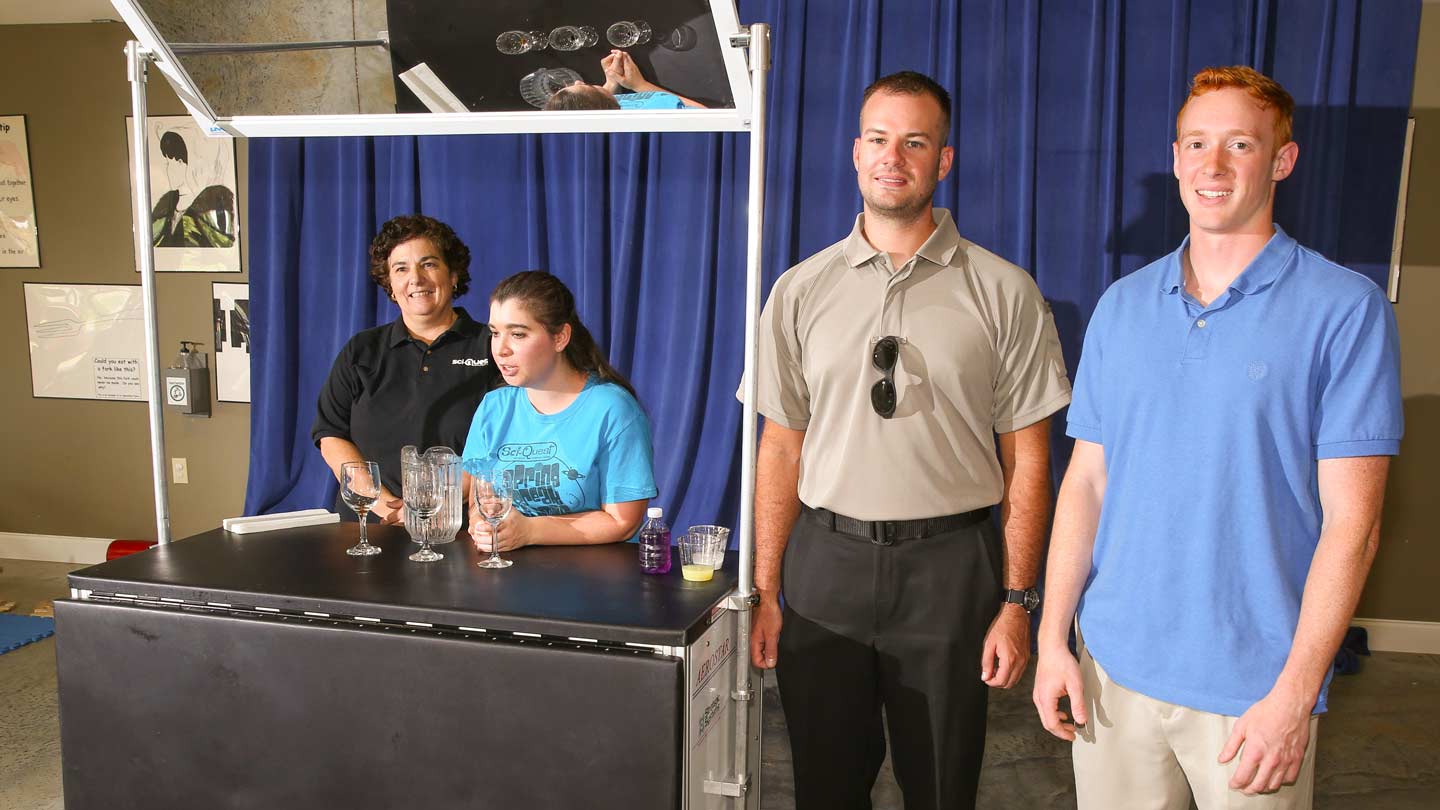 Brian McCoy and Josh Piner, students in UAH’s Engineering Design – Product Realization course, stand next to the mobile experimentation display station they designed and built for use at children’s museum Sci-Quest.

Build a mobile experimentation display station. That was the challenge a team of students in the Engineering Design - Product Realization course at The University of Alabama in Huntsville (UAH) was faced with. And that's what they did, turning out an award-winning creation that now sees daily use at local children's science center Sci-Quest.

"It's awesome," says Josh Piner, who graduated this past spring with his bachelor's degree in mechanical engineering. "Our goal was to exceed the requirements and really make a display station that was beyond expectations, and when we saw that we'd done that at the design review, we were satisfied."

Dr. Christina Carmen, a lecturer in UAH's Mechanical and Aerospace Engineering Department, teaches the two-semester class. It starts when the students are asked to select a project from a list of sponsored requests and then form teams based upon their selection. The first semester is then spent planning and designing the product while the next semester culminates with its manufacture, assembly, and presentation at a final design review with the sponsor.

In addition to the display station, this year's projects also included a net entanglement system to thwart pirated vessels, a mobile arm support for cerebral palsy patients, and a hard drive for an air transport rack, among others. "Originally the sponsors presented all of the projects so that we could learn more about them," says senior mechanical engineering major Brian McCoy. "So when the opportunity to work with Sci-Quest came up, to be able to build something for them to use, I thought that would be really neat."

McCoy and Piner were joined by fellow class members Brandon Ferguson, Sydney Steele, John Helms, Austin Avery, and Anh Hoang, with Steele serving as the team lead. "For the first semester, all we did was plan, research, and design, so it was all in our heads and on paper," says Piner. "Then we used computer programs to do stress and strain analysis- if we put this together, is it going to break if a kid hangs off of it?"

Our goal was to exceed the requirements and really make a display station that was beyond the expectations, and when we saw that we’d done that at the design review, we were satisfied.

Dr. Carmen bolstered these efforts during class time with lectures on topics relevant to the project, including public speaking, technical writing, human factors, product quality, aesthetics, materials analysis, and safety and hazard assessment - to name a few. "We also talked about team dynamics," she says. "All teams have some kind of storming, but negative team dynamics will kill the project quicker than anything."

Fortunately, that wasn't an issue for this team. "You have a good feel for teams during that first semester and you can tell which will be successful," says Dr. Carmen. "From the beginning, this one was enthusiastic and dedicated." Their design, honed over three design reviews during the first semester, met with enthusiastic support from the display station's sponsor, Women in Defense's Deborah Fraley. That enabled the students to begin construction on schedule once they returned from winter break.

"It went together as planned - to a point," says McCoy with a laugh. "There were a couple of times we were in the machine shop until midnight and a part wouldn't fit or we'd have to make some on-the-floor call as to how it would fit." But any frustrations that might have caused were chalked up to being part of the process. "I expected a little of that," he says. "If it all went to plan, there's no fun in that. Where's the challenge?"

Labor, of course, was supplied by the students. But much of the hardware was donated by local businesses. "As students go through the process they find that companies are willing to donate free- or reduced-cost parts in return for logos on the final product," explains Dr. Carmen. The team then tested the parts with various techniques to ensure their durability and longevity. "We had people sit on a part that folds out," says McCoy. "And Josh did a pull-up on it!"

Not surprisingly, the final result was "very awesome," says Piner. With an imprint of 2 ft x 4 ft and a height of 3 ft, the display station sits on four rolling castors to allow for easy mobility. The frame is made out of 80/20® aluminum and has acrylic side panels, a steel plate bottom for added weight and stability, and a raised mirror to reflect the top surface for increased visibility. "It also has modular shelving on the inside that you can adjust for storage and electrical outlets mounted on the side," he explains. 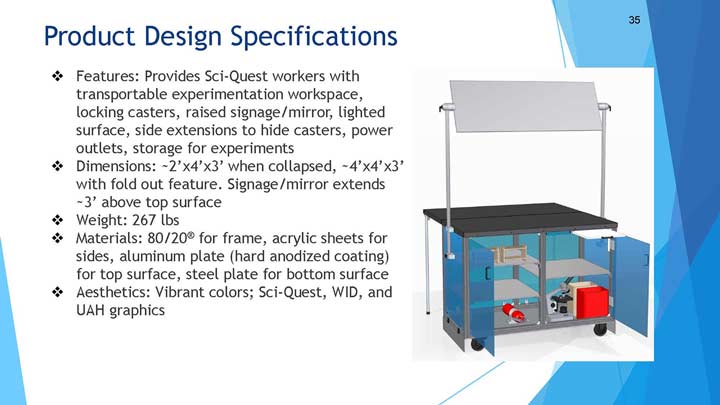 It is a testament to the team's attention to detail that the final design review yielded only one request - to shorten the poles holding the mirror - and an abundance of praise. "Ms. Fraley said she could have bought it out of a catalog," says McCoy. "That stuck out in my mind." They were even able to deliver the display station a month ahead of time so that the Sci-Quest staff could fully vet it before use. "They considered every single aspect, and I think that's why they didn't have too many adjustments during the operational testing," says Dr. Carmen.

The team's efforts were further validated when they were informed shortly after delivery that they had won first place in the 2015 Aluminum Extrusion Design Competition, hosted by the Extrusion Technology for Aluminum Profiles Foundation. "Dr. Carmen had told us about the competition, and so the Monday after spring break, we submitted a video demonstration of the display station showing how it was made and what its purpose is," says Piner. "We signed some forms, and Dr. Carmen sent it off."

Then they promptly forgot about it until an email showed up in their inboxes weeks later letting them know that they'd beaten nearly 60 teams from around the world to win a $3,000 cash prize. "I was so excited I had to read it a couple of times to figure out exactly what it was!" laughs McCoy. Piner says he felt the same. "I texted the group to see if they saw the email because it was really surprising - I didn't know if the international judges would think it was the most awesome display station built."

Now the display station holds a place of pride at Sci-Quest, where McCoy says "it looks as good as the day we dropped it off." But more than just ending the semester with a tangible final product, the students also left with a better understanding of what it takes to see a product through from concept to market. "One thing I took away was the team dynamics," says McCoy. "Working with like-minded people to get something like this pushed out, and then to have it be such a wonderful project, was something I wasn't used to."

Piner agrees, though as customer liaison, he also learned the importance of listening closely to the customer's needs. "When you're doing a project for someone outside of UAH and not just a teacher, you're really held to a higher responsibility for what you're doing," he says. "It's not like some test where you can get a 70 and pass. There's a real-world aspect where you're interacting with the customer and the requirements have to be met."

And ultimately that's what the Engineering Design - Product Realization course is really about. That Sci-Quest was also able to benefit by receiving an award-winning display station? For these students, it was simply all in a year's work.