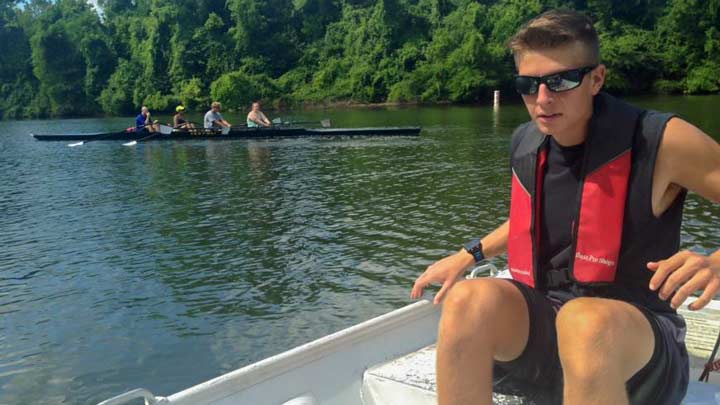 There aren’t too many things that Chuck Eadon likes to do more than get up early and take his boat out on the water. It’s a routine he got into more than forty years ago as a varsity rower for The University of Alabama in Huntsville (UAH). And it’s one he still follows today, as the volunteer coach of the UAH Rowing Club.

“A lot of people would shudder at it, but daybreak out on the water is very nice,” says Eadon, who earned an electrical engineering degree from UAH and now works as an engineer on Redstone Arsenal. “It’s amazing how you can clear your head and take out your frustrations on the water.”

Eadon originally came to UAH in 1974, planning to pursue a business degree. But between a stint in the Navy, a switch to engineering, and the pressures of working his way through college, he didn’t graduate until 1989. “There were times when I would only take one class per semester,” he says.

Nevertheless, he continued to be involved in UAH rowing both throughout his academic career and thereafter – first coaching the varsity team and then helping with its transition to a club sport in 1995. But when he and his wife moved to Seattle a few years later, the program fell dormant until his return in 2010. “We floundered a for a bit,” he says, “but then we really started to get going.”

Before long the team was holding its own against much larger and better-funded teams. Last year, the UAH Rowing Club won the women’s four, men’s single, women’s pair, and mixed-eight at the Row Tide Regatta in Tuscaloosa, Ala. And this summer, their men’s pair took first place at the Southern Intercollegiate Rowing Association Championship in Oak Ridge, Tenn., and third place at the American Collegiate Rowing Association Championships in Gainesville, Ga.

“It was a pretty impressive victory, particularly because we weren’t picked to win,” says Eadon of the latter. In fact, rowers Kevin Cardno and Logan McEwen spent most of the time leading up to the race hundreds of miles apart, with no chance to practice together. “Logan has a job in Baltimore, so he was taking his out one-man boat there while Kevin was doing the same here!” says Eadon with a laugh. “You just have to play the hand you’re dealt.”

That seems to be something of a theme for the hardscrabble club, which must balance expensive equipment needs with the small budget it’s afforded as a student-run organization. “Most of our money just gets us on the water – insuring the boats and paying dues to the national organization,” he says. “We’d prefer to have decent equipment but there’s no way we can afford it.”

It’s amazing how you can clear your head and take out your frustrations on the water.

Currently, the UAH Rowing Club maintains a fleet of eight boats in a combination of sizes. But while more would be nice, the biggest problem isn’t the amount – or lack thereof. “It’s really the age of the boats,” says Eadon, adding that the oldest boat has been in use for over 30 years. “We have stuff that eventually will wear out and no pipeline to replace it, whereas the bigger programs have budgets of over $100,000 and boats that are no older than five years.”

And better boats mean better times when it comes to racing. Thus, to compete effectively, the team will sometimes borrow equipment from their competitors or from the Huntsville-based Rocket City Rowing Club, with whom they share a four-bay boathouse on Hobbs Island Road. “We work hand in hand with them,” says Eadon. “It helps us tremendously.”

But good equipment is only half the equation when it comes to rowing; the other half is people to man the boats. Like every student organization, the UAH Rowing Club must contend with the relentless attrition that graduation brings. “We probably have 12 active members at the moment, which is on the low side,” he says. “If we can get into the 20s, we’ll be expanding rapidly.”

So much of this summer will be spent handing out flyers, speaking with incoming students at orientation, and exchanging emails with prospects looking to transfer from other schools. Then it’s time to hit the water. “We’ll try to get new people out before classes start,” says Eadon. “Some people want to work hard and some people are just getting into fitness, so we’ll break them into smaller groups and pair them up with similar people.”

Then once the academic year begins, so too do the races. Each year comprises a fall season and a spring season, the former mainly for “conditioning and teaching new people to row,” and the latter dedicated to more competitive intercollegiate racing. Fall races are 5000 meters with teams racing against the clock, while spring races are 2000-meter sprints with teams racing against each other. “You really don’t get everyone together until about mid-April,” says Eadon.

It’s a cycle that he has repeated on and off for decades now, and one that he says he plans to do for “at least a couple more years.” Though he confesses it’s likely he’ll still be close by even after he and the UAH Rowing Club part ways. “Rowing is a great sport,” he says, “and the best place to row here is where the boathouse is!” Habits, after all, can be hard to break.