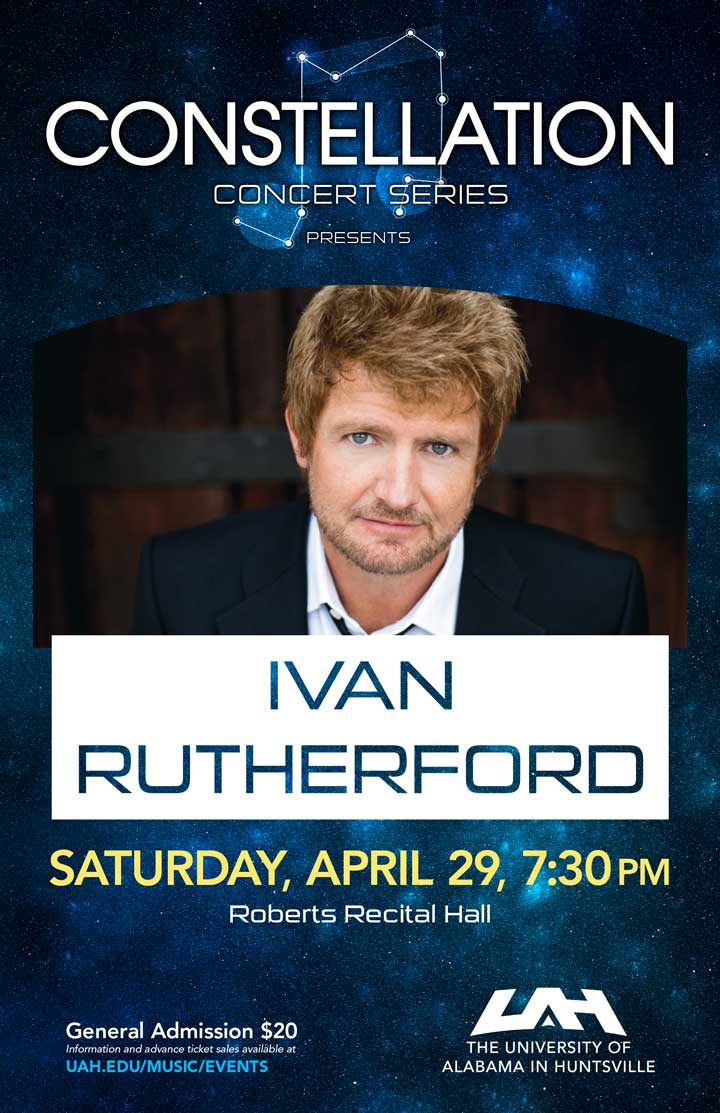 The Department of Music at The University of Alabama in Huntsville (UAH) is pleased to host "An Evening with Broadway Star Ivan Rutherford" at 7:30 p.m. on Saturday, April 29, in Roberts Recital Hall on the UAH campus.

"I’m looking forward to seeing all my friends at UAH and once again performing with their fine musicians," says the Los Angeles-based Rutherford, who also served as host of UAH’s inaugural Peace on Earth gala celebration in 2013. "I’m bringing my best-of-the-best, all-time favorites from Broadway, and I intend to leave it ALL onstage at UAH!"

Rutherford is an accomplished vocal coach currently working with rapper Future and electronic dance music duo the Chainsmokers. He is most famous for his role as Jean Valjean in Les Miserables – one he has performed over 2,300 times on Broadway and national tours. He has also had the honor of playing alongside Andrea McArdle at the Ogunquit Playhouse in Maine and Lea Salonga in Broadway’s 20th anniversary revival of Les Miserables.

In addition to Valjean, for which he was nominated as Best Actor at the First Annual National Broadway Theatre Awards, Rutherford’s other notable roles have included the Caliph in Kismet, Tony in Westside Story, Officer Charles Lightoller in the Broadway production of Titanic, and Lt. Joe Cable in South Pacific, for which he won a Drama-Logue Award.

"We’re excited that our Constellation Concert Series continues to attract top performers like Ivan to our campus and community," says Dr. Dave Ragsdale, chair of the Department of Music. "He is an amazing entertainer of the highest caliber – a captivating performer with charming warmth and presence. The audience will not want the evening to end!"

Tickets for the event are $20 per person and can be purchased online or at the door.