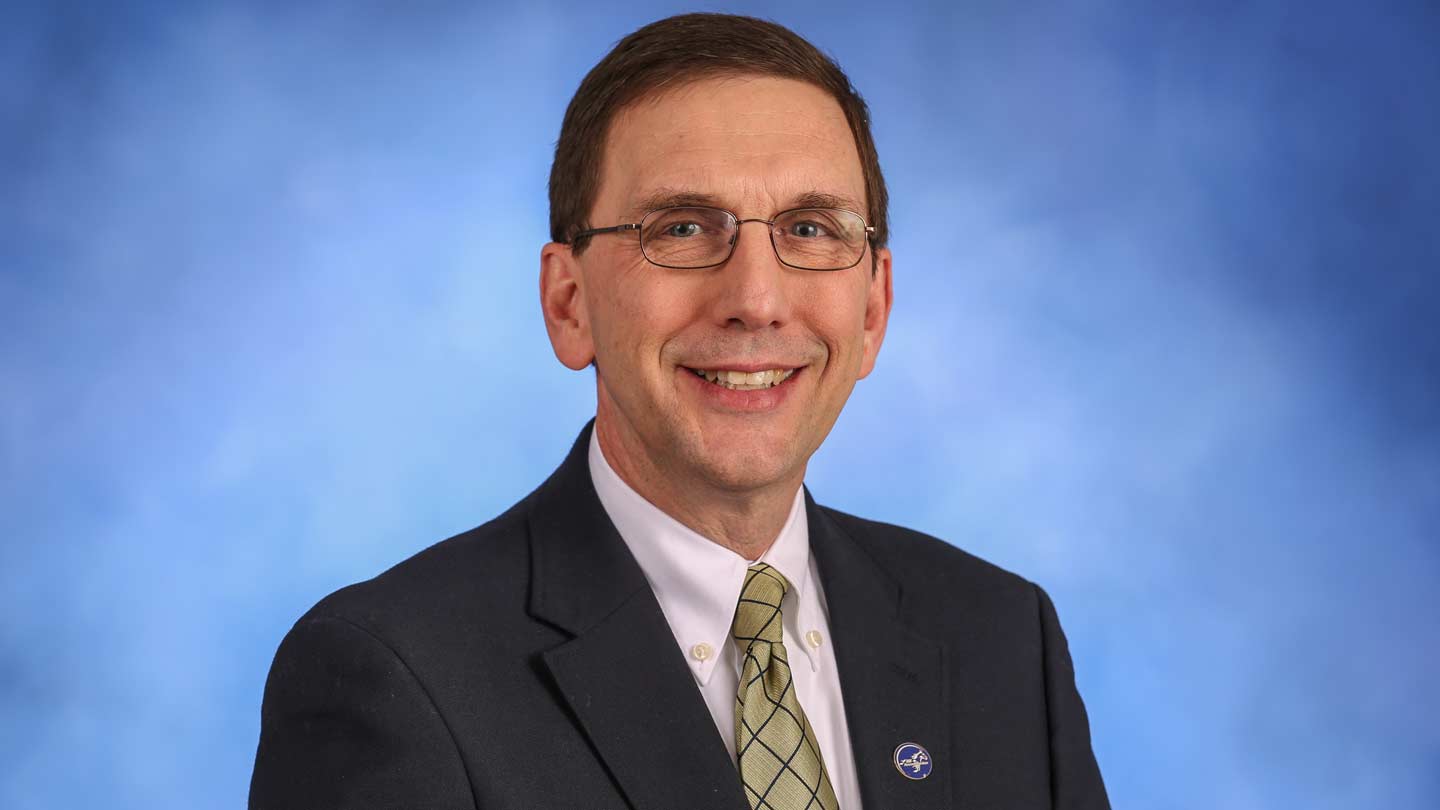 UAH's Propulsion Research Center (PRC) is commemorating 25 years of achievement in propulsion research and student education with a symposium and celebration Oct. 13-14.

"The 25th year reminds us to look back on all the achievements members of our PRC family have attained during that time," says Dr. Frederick, who became director in 2013. "It's important to recognize the achievements of all the people who have contributed to the PRC's success over the years. We also want to find out more about what they have achieved as they have gone on from the PRC, as graduates or in other roles, and recognize that."

On Oct. 13, a "Leading the Way in Propulsion" banquet at 5:30 p.m. in the Student Services Center will celebrate founding PRC contributors.

The 25th year reminds us to look back on all the achievements members of our PRC family have attained during that time.

"We'll recognize the people who did important first things that have helped us to grow and to evolve into the organization we have become today," says Dr. Frederick.

On Oct. 14, a student and alumni symposium in the Charger Union Theater will feature invited alumni talks and student research. Later, the PRC will conduct tours of its Johnson Research Center laboratories and of the UAH campus.

Over 25 years, the PRC has performed $35 million in research. Annual research presently is in the $1 million to $3 million range.

The PRC began as an effort to consolidate UAH's propulsion research.

"The university decided that it wanted a more focused approach to propulsion in the late 1980s," says Dr. Frederick. "It wanted something to bring together its research efforts and focus these efforts in that area."

The center's official beginning came in February 1991 when Dr. Clark Hawk accepted the position as director, bringing with him Dr. Frederick.

"He liked to do things that hadn't been done before, so really it was perfect for him," Dr. Frederick says.

At the same time, UAH funded an eminent scholar in propulsion, a move that was supported by industry, Redstone Arsenal, Marshall Space Flight Center and the missile community. Currently held by Dr. Phillip Ligrani, the position was first filled in August 1991 when Dr. Hugh Coleman was appointed and added to the faculty as a professor of mechanical engineering in the College of Engineering. 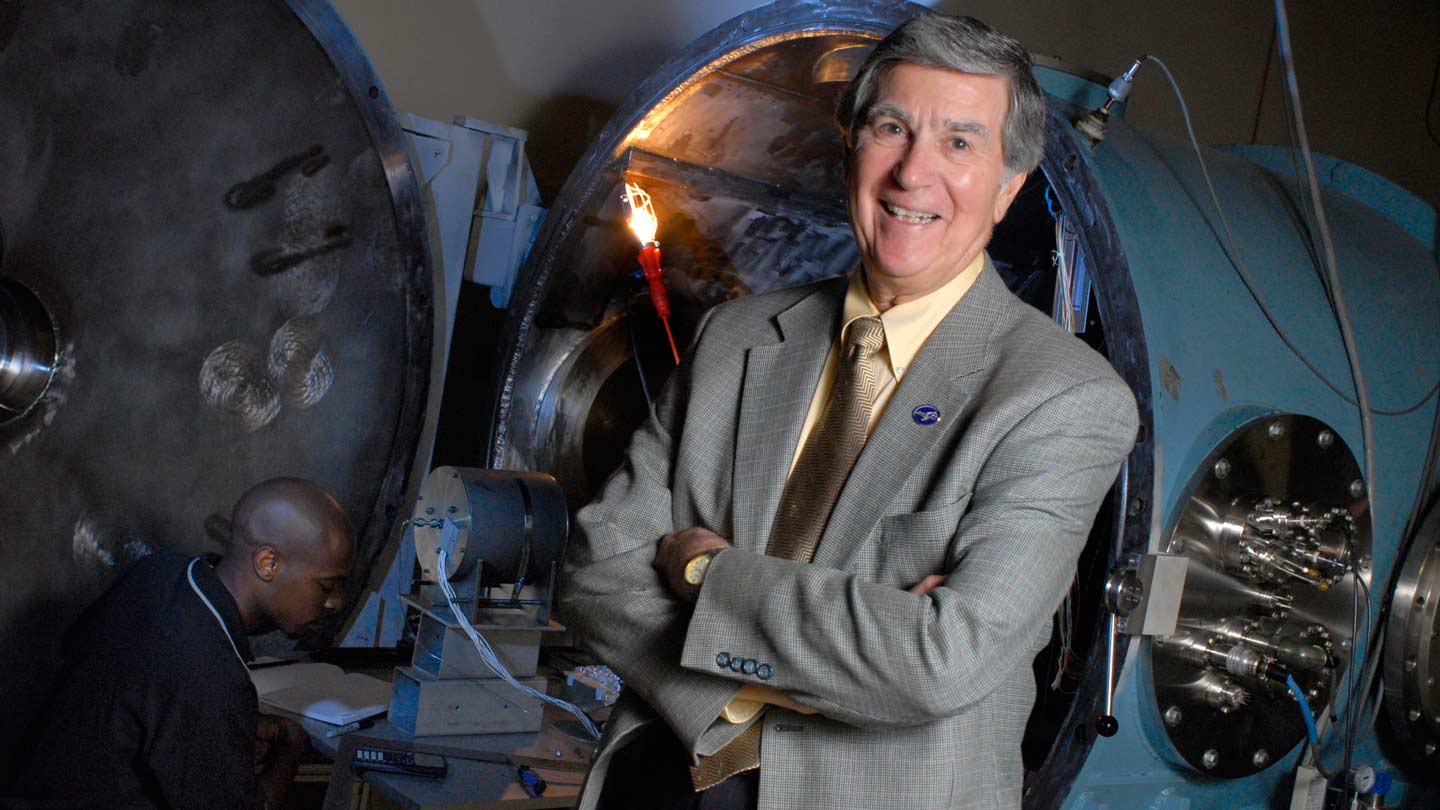 Dr. Clark Hawk was the founding director of the Propulsion Research Center.

"At that time, the industry was downsizing, which seems to be a recurring theme, and so that would seem to not be a real good time to be starting a research organization," Dr. Frederick says. "But because of that environment, industry began to use us as a resource to train people so that they could quickly integrate them into their operations and have them become a valuable resource in a very short period of time."

Initially, the PRC relied on NASA and Thiokol Corp. labs, and those were where Dr. Frederick went to work on hybrid propulsion research as a NASA summer faculty member. By summer of 1996, the PRC had expanded into the 15,000 square-foot Johnson Research Center on the south side of the UAH campus, a facility originally built in the 1975 for energy research and then repurposed to propulsion research. There, the PRC has six primary facilities: the Hot Fire Test Cell, the High Pressure Spray Facility, the Plasma Combustion Laboratory, the Water Tunnel Flow Facility, a Large Scale Vacuum Chamber and the SuperSonic/TranSonic/WindTunnel (SS/TS/WT).

"We began to develop more and more laboratories to provide our students with hands-on experience and expertise in the various aspects of propulsion because that's what industry wanted," says Dr. Frederick. "And then we expanded that, and the idea was to work with all the local agencies and their laboratories, as well. These kinds of relationships continue to this day."

Currently, UAH, Marshall Space Flight Center and Redstone Arsenal are working together at Redstone Arsenal with industry partners to probe a futuristic propulsion system that could send explorers to Mars and beyond at the university's Charger-1 Pulsed Power Generator.

Led by UAH's Dr. Jason Cassibry, scientists are repurposing machinery originally built for nuclear weapons research into a test facility for a spacecraft propulsion system based on nuclear fusion. The facility will produce an extremely brief pulse of plasma created by an equally brief nuclear fusion reaction. An engine producing these pulses could propel a spacecraft over inter­planetary distances at great speeds.

"We've gone from no labs to 10 labs on campus," Dr. Frederick says. "Some were built by the university and others were constructed with federal or state government support, or some mixture of the three. These have allowed us to become one of the main universities in propulsion research areas."

The vision of founding director Dr. Hawk, who died in 2008, was to create a positive and supportive community where students were at the center of research activities. The first seven master's degrees with PRC involvement were earned in 1993. The first four doctoral degrees registered in 1997.

"We are approaching 250 graduate students who have worked with the PRC on completing their degrees," says Dr. Frederick. "The PRC is a different organization in that we don't actually provide the degrees. Those come from their respective colleges and departments. What we do is, we help form the research groups that allow the students to do that research."

In addition to the Department of Mechanical and Aerospace Engineering, the PRC collaborates with other academic units on the campus, including Chemical Engineering, Electrical and Computer Engineering, Industrial and Systems Engineering, Civil Engineering, Physics, Chemistry, Mathematics and Music.

Twenty-five years of achievement in propulsion research and collaboration has brought growth.

"We started from three people, each of us with a used desk, and now we touch about 60 faculty, staff and students a year who are supported by our research efforts," says Dr. Frederick. "As we've matured, we've had to become more of an organization to provide the kind of cooperative environment where our faculty, students and staff can thrive in our areas of interest in propulsion and energy.

"We have also evolved to work closely with small industry in these fields, where we are able to provide them with the kind of close working relationships and attention they need to succeed."