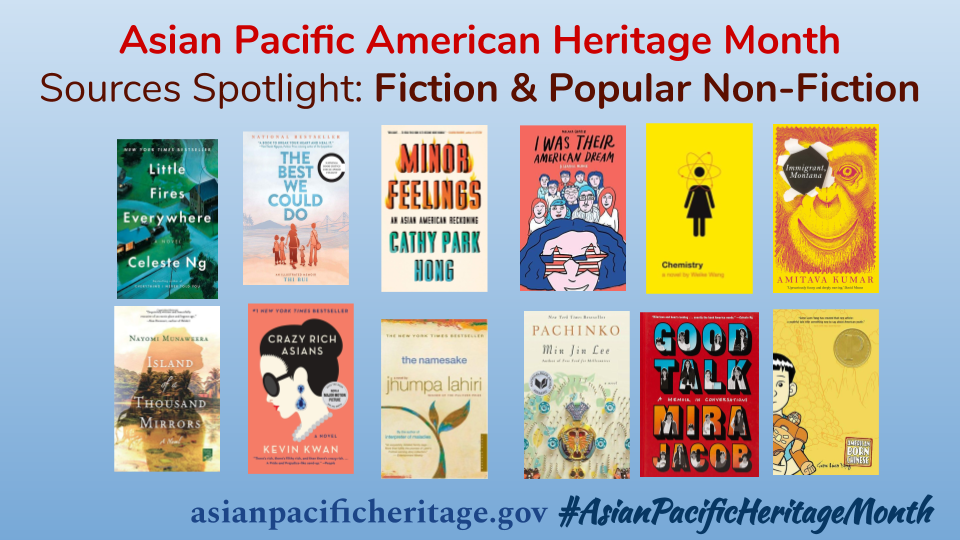 The Salmon Library has teamed up with The Office of Diversity, Equity, and Inclusion to celebrate Asian Pacific American Heritage Month throughout the month of May. What is APAHM all about? To quote the official page, "Asian Americans and Pacific Islanders have a rich heritage thousands of years old and have both shaped the history of the United States and had their lives dramatically influenced by moments in its history," and, from their about page, it defines the month as "a celebration of Asians and Pacific Islanders in the United States."

With words like "heritage" and many of the exhibits featured being about the historical perspective on how Asian Americans and Pacific Islander Americans have influenced, and have been influenced by, American history, it might be easy to think of this month in terms of the past. However, it is important to note that this month also celebrates the current ways Asian- and Pacific Islander Americans continue to add to our collective culture and enhance the tapestry of American experience. In this blog post, we are going to be taking a look at one such way (perhaps a bit obvious for a library to post): recent fiction and non-fiction books.

There are a lot of them. In a Goodreads list dedicated to popular Asian American books, alone, there are well over 3000 books featured. These books are as varied as the people who wrote them: you have literary fiction, science fiction, fantasy, young adult fiction, mystery fiction, horror, and many varieties of non-fiction books. How do you narrow it down?

You could start with some of the popular ones that show up on a number of lists. Such as Amy Tan's 1989 novel, The Joy Luck Club (later adapted into a movie). Or, more recently, Or Jhumpa Lahiri's The Namesake (2003, and then also later adapted into a film). Celeste Ng's 2017 novel Little Fires Everywhere was just this previous month released in mini-series format through Hulu. If you prefer non-fiction graphical novels, how about Thi Bui's award winning The Best We Could Do? All of the books in this short list, by the way, have won numerous awards and topped best-seller lists.

This only cracks the very tip of the iceberg, however. How do you go deeper? One possible way is to look at the winners of Asian/Pacific American Librarians Association literary awards. The 2019-2020 winner for adult novel was Devi Laskar's The Atlas of Reds and Blues while Ghosts of Gold Mountain: The Epic Story of the Chinese Who Built the Transcontinental Railroad by Gordon H. Chang took the adult non-fiction award. Each year has a winner and a honor's book in several categories: adult fiction, adult non-fiction, young adult, children's literature, and picture book. The awards go back several years to 2005-2006, when the first winner was Chang-Rae Lee's Aloft. Lee is perhaps better known for his 1995 Native Speaker (which won the PEN/Hemingway award for best first novel) and his 2010 The Surrendered (which was a finalist for the Pulitzer Prize for Fiction).

By the nature of awards, though, there will only be a few books showing up per year. How to find more (besides plucking through numerous Goodreads and such shelves)? Luckily, several people have compiled lists of their recommended books [often in conjunction with Asian Pacific American Heritage Month, often with a number of books plus the words "must-read"]. Here are some good ones to look at:

[Author's Note: Not only is the Mental Floss article a good list, but it might have made our meta-list partially because it at least tried changing up the wording]

Of course, other libraries have lists compiled either by librarians or by library patrons (or some combination). For instance, see Asian Pacific American lists by libraries at Santa Clara County, Seattle, and Georgetown University. That lattermost page highlights another of the aforementioned Chang-Rae Lee's novels, On Such a Full Sea, for those reading this wondering where the more speculative, dystopian novels might be.

Hopefully this gives you some ideas to get you started. If you find a book through any of these, or simply have a book you'd like to shout out, how about you let us know on Facebook, Instagram, Twitter, or by email. Happy reading.