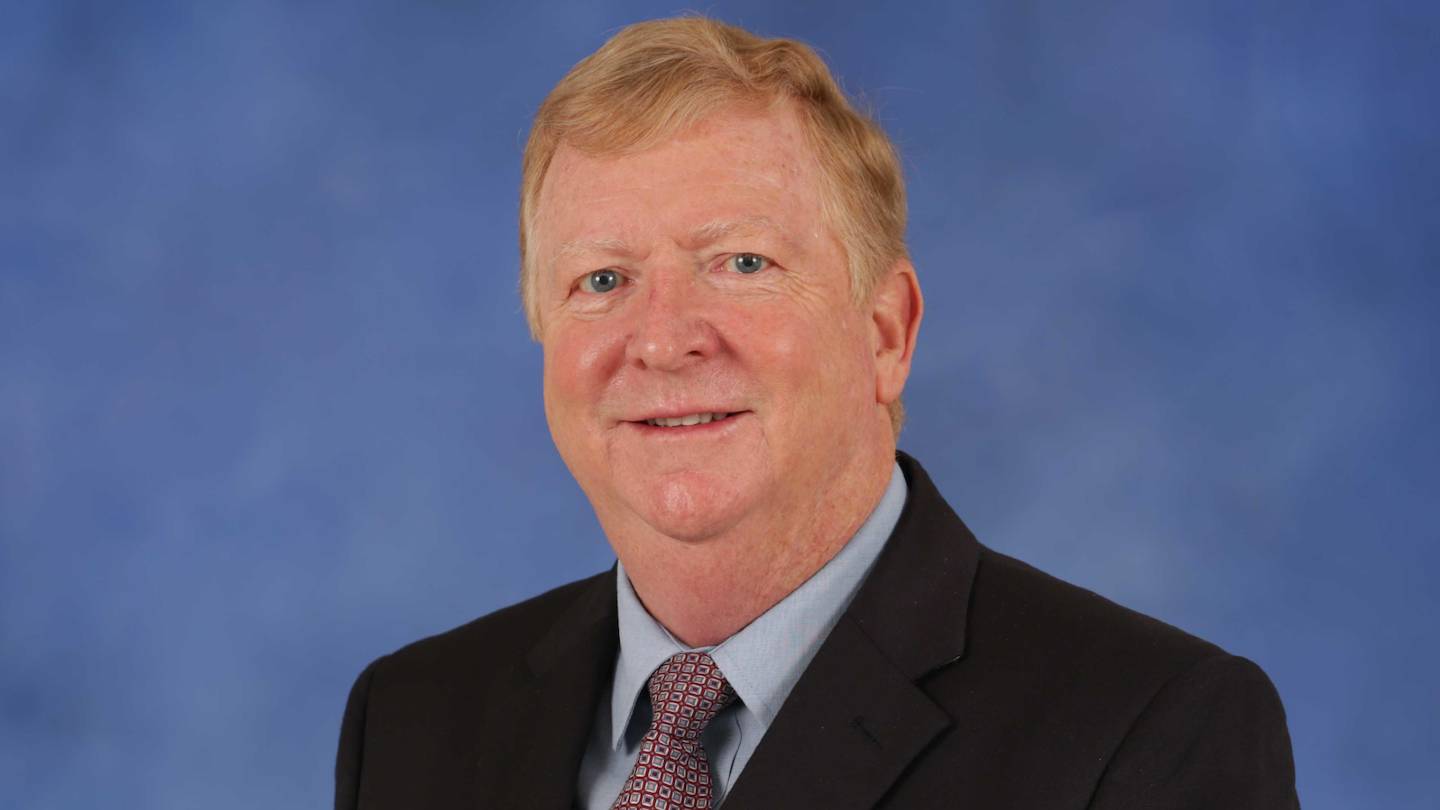 “I am very appreciative to the UAH Alumni Association and the College of Engineering,” the honoree says. “This opportunity would not have been possible without the first-class education provided at UAH and the continuing Huntsville success story.”

Galloway is a Senior Systems Engineer at Teledyne Brown Engineering (TBE) and has amassed 38 year’s experience in space payload design, development, testing, integration and operations for manned and unmanned launch vehicles, including the ISS and SpaceX Dragon.

“I lead and advise the payload development science and engineering team through the ISS Integration and Safety Process,” he says. “My job is to work with the scientists and engineers that have a concept or design for a space experiment, and then develop the flight hardware, interface equipment and operational processes that will fully achieve their science objectives in space.”

Galloway is tasked with the critically important role of helping ensure the safety and success of each mission he supports.

“It is a great responsibility to formally ‘sign’ for flight hardware developed by a third party,” the alumnus says. “I certify to NASA that the hardware and operations do not pose a risk to the flight crew, the vehicle, and that all hazards are known and controlled. Over my career I have designed, developed, integrated and operated about 40 science payloads for the Space Shuttle, Mir Space Station and ISS. Some of these are stand-alone short-term experiments, and some are complex multi-user equipment that has been operating on ISS for decades.”

In looking over a career filled with highlights, the engineer points to several that are especially memorable, such as the Multiple User System for Earth Sensing (MUSES) with DLR Earth Sensing Imaging Spectrometer (DESIS) program, a complex pointing system on the exterior of the ISS.

“The projects with high-visibility science interest and humanitarian importance are always the most challenging and interesting,” Galloway reports. “My favorite area of space science and the discipline that I have spent most of my career in is Earth Remote Sensing. MUSES/DESIS is sending images of the Earth’s surface almost daily to Earth scientists in the U.S. and Europe. The hyperspectral image data can be used to affect large-scale ground processes, detect pollution and help preserve our planet for future generations. I was the Lead Systems Engineer for this project, and it has been operating perfectly on ISS since 2017.”

Galloway also supported the development and integration of the Window Observational Research Facility (WORF) with ISS SERVIR Environmental Research and Visualization System (ISERV) Telescope, a multi-user facility for Earth-viewing instruments, as well as payload integration for the EXpedite Processing of Experiments to Space Station (EXPRESS) project. Other complex projects he has supported over the years include the Spacelab Program Crystal Growth Furnace (CGF), the Ring Sheared Drop (RSD) for Microgravity Science Glovebox, Multiple Biotechnology Instruments for the Mir Space Station and Oral Biofilms in Space (OBiS) for the ISS.

My heroes are the ones that bring projects to completion, whether that is a building, a business, an organization/church, equipment or space flight hardware.

“New payloads I am involved with for future missions include the LargE Area burst Polarimeter (LEAP), an astrophysics instrument for ISS and the Extant Life Volumetric Imaging System (ELVIS), a precursor to a deep space instrument for microbial life detection,” the engineer notes.

Galloway has also trained astronauts on Science Payload Operations and has had the opportunity to work with engineers and scientists from Germany, Italy, France, the Netherlands, Canada, Japan and Russia on projects for the ISS. In 2010, he received a NASA Silver Snoopy award recognizing contributions to crew safety and scientific utilization of the ISS.

“Working directly with Russian Engineers in the mid 90s to place NASA science hardware on the Mir Space Station was very interesting and challenging, considering the language barrier and limited understanding of the payload interfaces and capabilities of Mir,” Galloway says. “Through my current work, I have integrated space hardware on the SpaceX Dragon launch vehicle every year since 2017 and have had the opportunity to attend several launches.”

Galloway’s family moved to Huntsville from Biloxi, Mississippi, in the early 1960s.

“My father transferred from Keesler Air Force Base to Redstone Arsenal. He was an instructor and electronics specialist in the Army Missile and Munitions Center and taught missile operations to active military and defense contractors. Redstone Arsenal was our ‘backyard,’ and we had convenient access to essentially the entire base for cycling, hiking, fishing and camping.”

He counts his father and a special teacher among his earliest mentors who helped provide a groundwork for excellence that has stayed with him to this day.

“My father was a mentor based on his work ethic, example of faith and holding me accountable for grades and academics,” Galloway recalls. “Our family for generations has always been involved in farming, building, mechanical, electrical and skilled trades. I had a middle school math teacher (Mrs. Koteski) that had me come to the front of the room, without advance notice, and explain to the class how trigonometry can be applied to solving real world problems. At that point, I understood that my work was paying off, and these new math skills would be useful in the future. Teachers should never underestimate the long-term impact they can have on their students.”

UAH proved to be an easy choice when it came to continuing his education.

“I was aware that many engineers working in the Army Missile Defense and NASA MSFC Human Space Flight Programs also taught classes at UAH. That meant real-world engineering problems were being brought into the classrooms, and I experienced this first-hand. In addition, several members of the von Braun Apollo Rocket and Skylab design and development teams were starting to retire, and some taught engineering classes at UAH. I could not imagine a better place to go for an engineering degree.”

Galloway also met his wife, Mercedes (UAH BSEE ‘86), while attending UAH, and a summer job brought him into close proximity with NASA operations early on. “As a student, I worked on the grounds’ maintenance crew at MSFC and had access to the test areas during the Space Shuttle structural vibration and main engine testing, an experience that shaped my future career decisions. I had a close-up view of NASA space vehicle projects and large-scale engineering.”

The alumnus recalls a number of his instructors in particular from his days as a budding spaceflight engineer.

“Dr. Willibald Prasthofer taught freshman Design Engineering. He was a NASA veteran and brought Skylab Orbiting Laboratory projects into the classroom. He worked as a member of Dr. Wernher von Braun’s rocket team during World War 2 in Peenemunde, Germany. Dr. James Smith was Chairman of the newly formed Chemical Engineering Department. The classes were very small, sometimes around five students, with ample one-on-one instruction. Chemical Engineering was a new program at that time, and I was in the first 15 graduates. Dr. Francis Wessling, Director of the Consortium for Materials Development in Space at UAH, served as my master’s thesis advisor. He gave me the opportunity work on a thermal math model for a ground-based prototype for a future space materials processing crystal growth experiment. This was my first opportunity to see the fusion of applied science and engineering and be part of an engineering team.”

Galloway’s first position after graduation was as a thermal/fluids engineer with McDonnell Douglas working on the Spacelab Integration Program. As his career progressed, he came to admire anyone who excelled at detailed planning, complex process execution and attention to detail.

“My heroes are the ones that bring projects to completion, whether that is a building, a business, an organization/church, equipment or space flight hardware,” he says. “Unlike rocket or launch vehicle development, which can be a large team of several hundred people, payload development teams are much smaller, usually on the order of 20 or less. That means knowledge in multiple engineering disciplines is very valuable. I have had the opportunity to work with the best scientists in their respective fields in the U.S., and some cases, the world.”

It has been especially gratifying for the UAH alumnus to follow through on long-term projects.

“The time scale for development of a space payload is on the order of two to five years,” Galloway explains. “There is no room for failure in our business. Most, if not all, of the science payloads we build and launch cannot be repaired in space. The pressure to eliminate possible failures, mitigate risks, prevent safety hazards and build reliable equipment forces complete attention to detail.”

As to the future, the engineer wants to continue to make a difference in the lives of others wherever he can. “I will continue to serve as a deacon at my church. As a member of the Mercy and Benevolence Committee, I have the opportunity to serve others and the local community. I have been involved in youth and adult sports for several years. I am an active soccer referee. Being in the middle of intense sporting events has taught me a lot about managing human behavior and fast thinking.”

When asked about his career goals with the space program, Galloway plans on staying with NASA as long as the agency will have him.

“I plan to continue working in the engineering field and contribute to NASA’s mission for the near future.,” the engineer says. “Most every space experiment we build or integrate has significant importance to science, discovery or humanitarian benefits.”