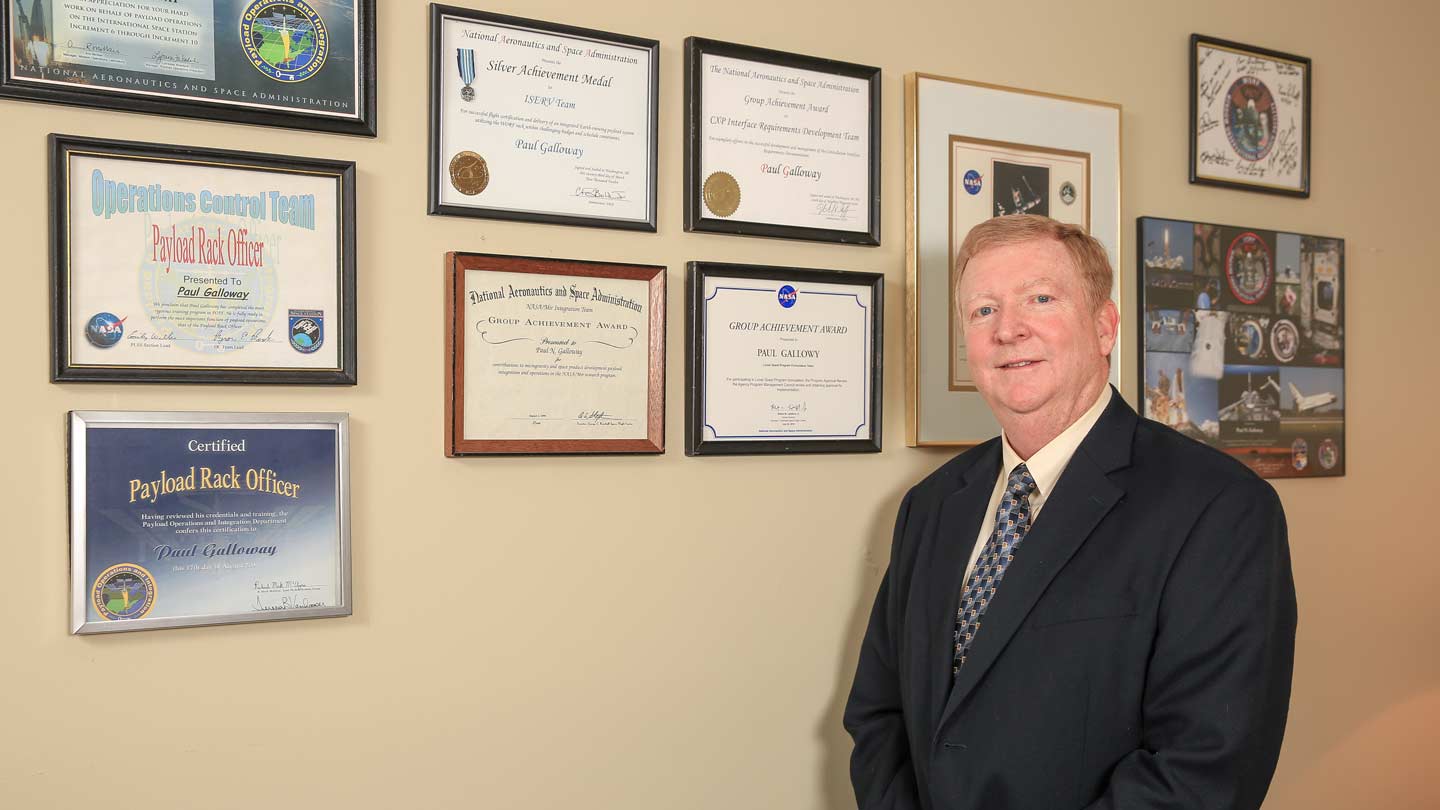 When the chief engineer at your firm writes to your alma mater to extol your work on a complex project now aboard the International Space Station (ISS), you must be doing things right.

"His accomplishments on a recent project which has culminated in a capability installed on the International Space Station exemplify his skills, expertise, and professionalism," wrote Rice. 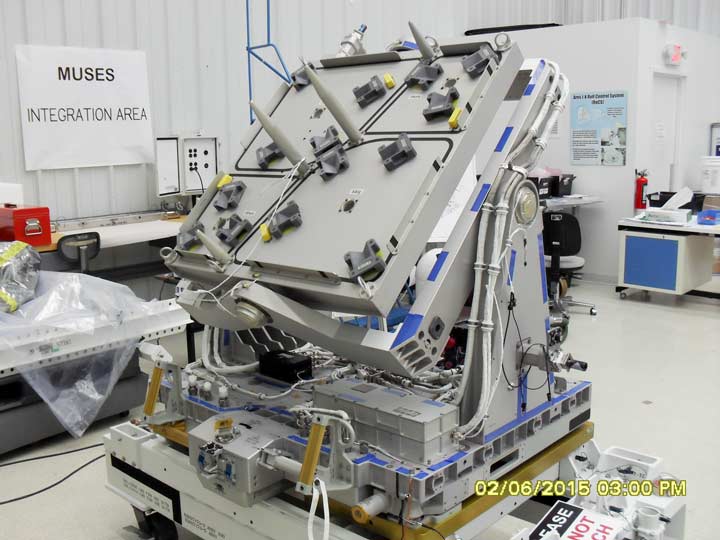 That project is the Multiple User System for Earth Sensing (MUSES), an endeavor Galloway has been involved with since 2012. MUSES hosts earth-viewing science instruments such as high-resolution digital cameras and hyperspectral imagers. It also provides a test bed for technology demonstration and technology maturation by providing long-term access to the space environment.

"The chief engineer is a company level position that has technical oversight of all major projects throughout multiple divisions within the company," Galloway says. "To be recognized by the chief engineer is an honor. It shows how much value the NASA customer and the company placed on the MUSES Project. The chief engineer was involved in all the MUSES design and management reviews, so I had ample opportunities via briefings to communicate my technical contributions to the project. It also helped that the project was highly successful.

"My advice to young engineers is to take every briefing seriously and communicate clearly when the opportunity arises," he says. "You must always be marketing your skills in the workplace."

When he became involved with MUSES, Galloway was a senior engineer with 25 years of experience in the design, development, fabrication, integration and operations of science payloads on multiple NASA launch vehicles and the ISS.

"I had been part of several NASA and commercial teams building and operating major pressurized facility class payloads and science instruments for ISS," Galloway says. "My backgrounds in ISS payload integration and Earth Remote Sensing instrument development were ideal for the MUSES Project and I had a management team that was very familiar with my past accomplishments."

The task set forth by TBE, a subsidiary of Teledyne Technologies (TDY), and NASA was to build and operate a new multi-user precision pointing system for Earth-viewing payloads on the ISS, and a small team of 10 TBE engineers tackled it.

"Initially, my job was to define the functional and interface requirements, conduct the design reviews, perform system testing, manage engineering analysis efforts, and then, verify that the MUSES system met all the launch vehicle and ISS interface and safety requirements," he says. "Later, through a retirement, I became program manager and I had the responsibility to close all the verifications and integrate the MUSES on the SpaceX launch vehicle and ISS. My direct responsibility ended after MUSES was installed and reached full operating capability on ISS on October 3, 2017."

There were challenges involving managing and working the closure of the large and complex set of functional, interface and safety requirements that are necessary to launch and successfully operate unpressurized payloads on ISS.

"MUSES has both human and robotic interfaces on ISS, which greatly adds to the design and operational complexity of the flight hardware. MUSES also has strict pointing accuracy and pointing knowledge requirements to support the science and technology instruments that will be installed and operated on MUSES, which complicates the onboard data acquisition and feedback control systems," Galloway says.

"It is a gimbal, or articulating, system that had to operate in space vacuum and a harsh space radiation environment that requires reliable electronics and a complex pre-flight testing regime using multiple NASA and commercial test facilities."

MUSES is a high cost/high risk project with high visibility within both the NASA ISS Program and TBE, which added to the pressure for success. So launch day on June 3, 2017, was exciting.

"When you have dedicated your life to a project for five years, there is no better feeling than to know that the hardware your team has built and tested has survived the launch on the SpaceX vehicle, a lengthy and tedious robotic transfer to the final location on the ISS, and then it turns on and operates as designed," Galloway says. "The final measure of success is when flight system data is being recorded on the ground and all measurements are nominal. There are so many single technical problems that can arise to cause a failure of the entire system and very little hardware redundancy is built into most payloads to mitigate these risks.

"Parts selection, strategic hardware redundancy, and pre-flight testing are critical for success. There is little to no room for error on these complex space missions. We had to get MUSES right the first time, since it was not designed for on-orbit repair. MUSES has operated perfectly since launch and installation on ISS."

MUSES is approved to be on ISS for the station’s remaining life, which is currently 2024. The MUSES Program is now working on the first instrument for the MUSES, being developed by the German Space Agency DLR. The DLR Earth Sensing Imaging Spectrometer (DESIS) is scheduled to be launched in second quarter of 2018.

"My current job is to integrate DESIS on the launch vehicle and MUSES," Galloway says. "There are slots for three additional instruments on MUSES and much work is going on currently to recruit and develop new payload instruments for MUSES."

Galloway’s interest in payload engineering is sparked by the many technical details that must be mastered for success.

"Space payload development is technically challenging. It requires complete attention to detail for success," he says. "The engineers and teams you work with are highly skilled and motivated by the strategic importance of the work. Because payload development teams are small, you must use your skills across several engineering disciplines. A broad based engineering education is valuable for payload systems engineering."

His career has provided Galloway opportunities to collaborate on international projects with engineers from other cultures. Among his projects was a "very challenging and interesting" one integrating several microgravity and life science payloads on the Russian Mir Space Station in the late ’90s.

"As an experienced engineer, your technical skills and judgment are valued and you can become a recognized expert in your field," he says "I have received recognition from NASA for my work, including a Silver Snoopy, and traveled to several Space Shuttle launches and landings. I also attended the MUSES launch on SpaceX-11 and provided a pre-flight briefing to the national space media."

His time at UAH was crucial to learning the process and discipline to break complex problems down into finite and manageable elements, Galloway says.

"In industry, you get paid to solve complex problems in the most efficient manner possible. The technical training and problem solving skills I gained at UAH have been very useful in my career."

He says he also worked with small teams in several classes at UAH, especially in the laboratories.

"Teamwork is essential for large complex engineering projects, since they are multi-disciplinary in nature," Galloway says. "I had an opportunity to work with Dr. Francis Wessling on a master’s thesis project in microgravity science. This experience was beneficial in getting started in space payload development and integration. "

He was also involved in the American Institute of Aeronautics and Astronautics (AIAA) and other student organizations and has since co-authored several technical papers to communicate accomplishments in the aerospace industry. "My advice to engineering students is to take every opportunity to work on and improve your technical communication skills."

Galloway, who was in the third pledge class of Pi Kappa Alpha Fraternity and remains friends with several members today, says one of the best aspects of UAH was the diversity of the engineering professors.

"The professors brought real engineering problems to the classroom from their jobs in industry, the U.S. Army and NASA," he says. "Over my career, I have had opportunities to work with successful engineers, scientists, astronauts and former members of the original Von Braun rocket team, some of which were on the faculty at UAH during my time there."

His wife, Mercedes Coombe Galloway, is a 1985 graduate of UAH in Electrical Engineering, so the family has deep ties to Huntsville and the UAH engineering program.

"I owe much to UAH for the success I have achieved and I am now looking for opportunities to give back to UAH," Galloway says. "It has been enjoyable to watch UAH grow from my office window on Sparkman Drive. I never strayed too far away from the campus."