In a collaborative effort, director of CSPAR Gary Zank and NASA/MSFC Chief Solar Physicist Jonathan Cirtain have funded the CSTAR (Collaborative Simulation and Telecommunication Array) Visualization Center in the NSSTC building on the UAHuntsville campus. The system was custom engineered by Vladimir Florinski, Jacob Heerikhuisen and Chris King. Drs. Florinski and Heerikhuisen are assistant professors in the Physics Department as well as CSPAR scientists, and Chris King is the CSPAR IT specialist. The visualization center consists of two key components: a 4x3 array of screens with ultra-thin bezels, and a server to drive the monitors. The monitors are specifically designed for video wall applications and feature a screen-to-screen bezel width of 7.3mm (just over 1/4 inch). The server has two quad core processors, 48Gb of memory, and utilizes a single ATI Eyefinity 6 video card with 6 outputs. The processors and graphics card are water cooled, alleviating the need for fans in the computer case, and rendering the machine virtually silent. Each output from the video card is split into two using separate hardware boxes from Accell, so that all 12 monitors can be connected and treated as a single screen with 5464x2304 resolution (12.5 MPixel). The system runs Fedora 28 Linux and has an embedded “virtual box” running Windows, that allows for MS-Office applications to be displayed at the same time as movies run in Linux. 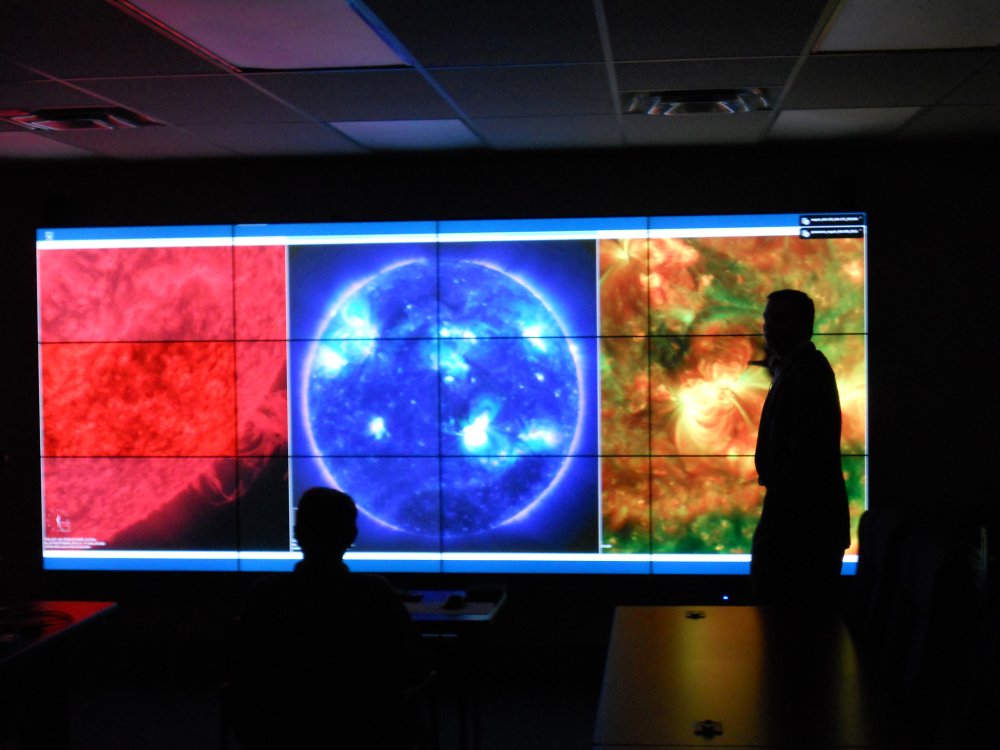 NASA scientists simultaneously playing three 2000x2000 pixel videos of the Sun produced from images captured by the Hinode spacecraft. The ability to view large images at their native resolution is crucial for analyzing and modeling of solar activity. 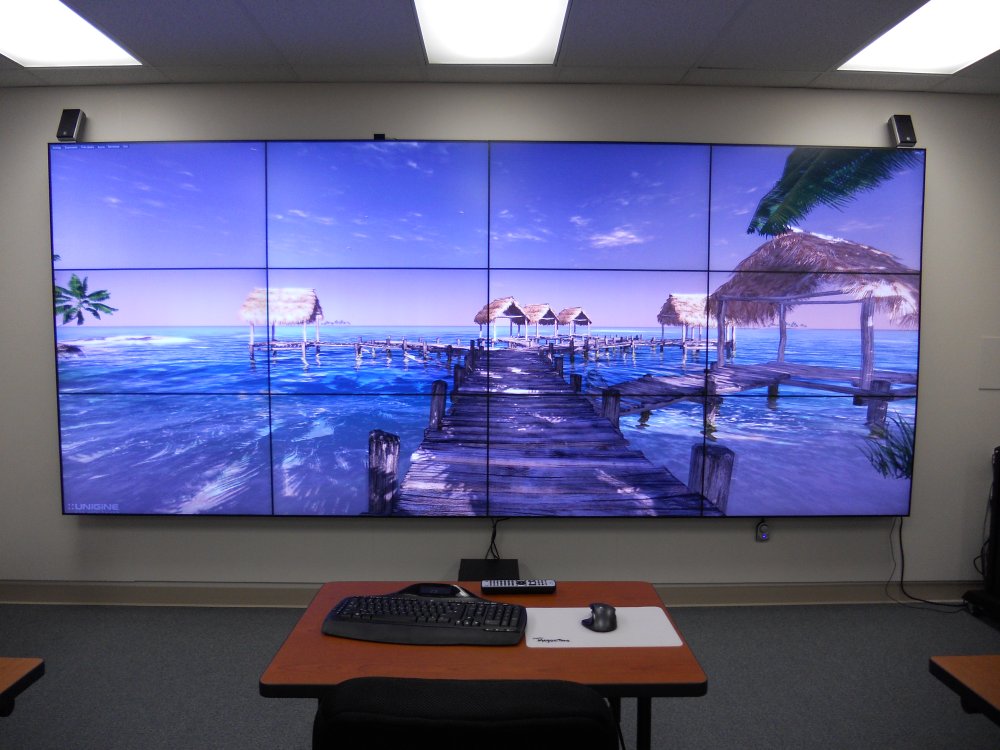 Applications for “the wall” focus on the extremely high resolution images that can be displayed, and the immersive capabilities of being able to see all of a large image up close. Dr Cirtain, for example, can show several movies of satellite data at 2000x2000 resolution at the same time. Another application is to display large 3D data sets from simulations at full resolution. Analysis of 3D data in an immersive setting is perhaps the most impressive feature – a user could navigate through a 3D environment that may represent the inside of a rocket engine, for example. Since this is a collaborative project, we anticipate interest in using the facility will increase once people have time to ponder the possibilities the center brings. The system can render results from large three-dimensional numerical simulations of the solar system space environment with unprecedented detail using scientific visualization software such as VisIt or TecPlot. The system can be used for educational purposes as well. For example, the popular Stellarium night sky simulator allows students to learn the principles of astronomy in an immersive environment. The facility will also be used to collaborate remotely through video-conferencing and to show presentations at 10 times the resolution of a standard projector.