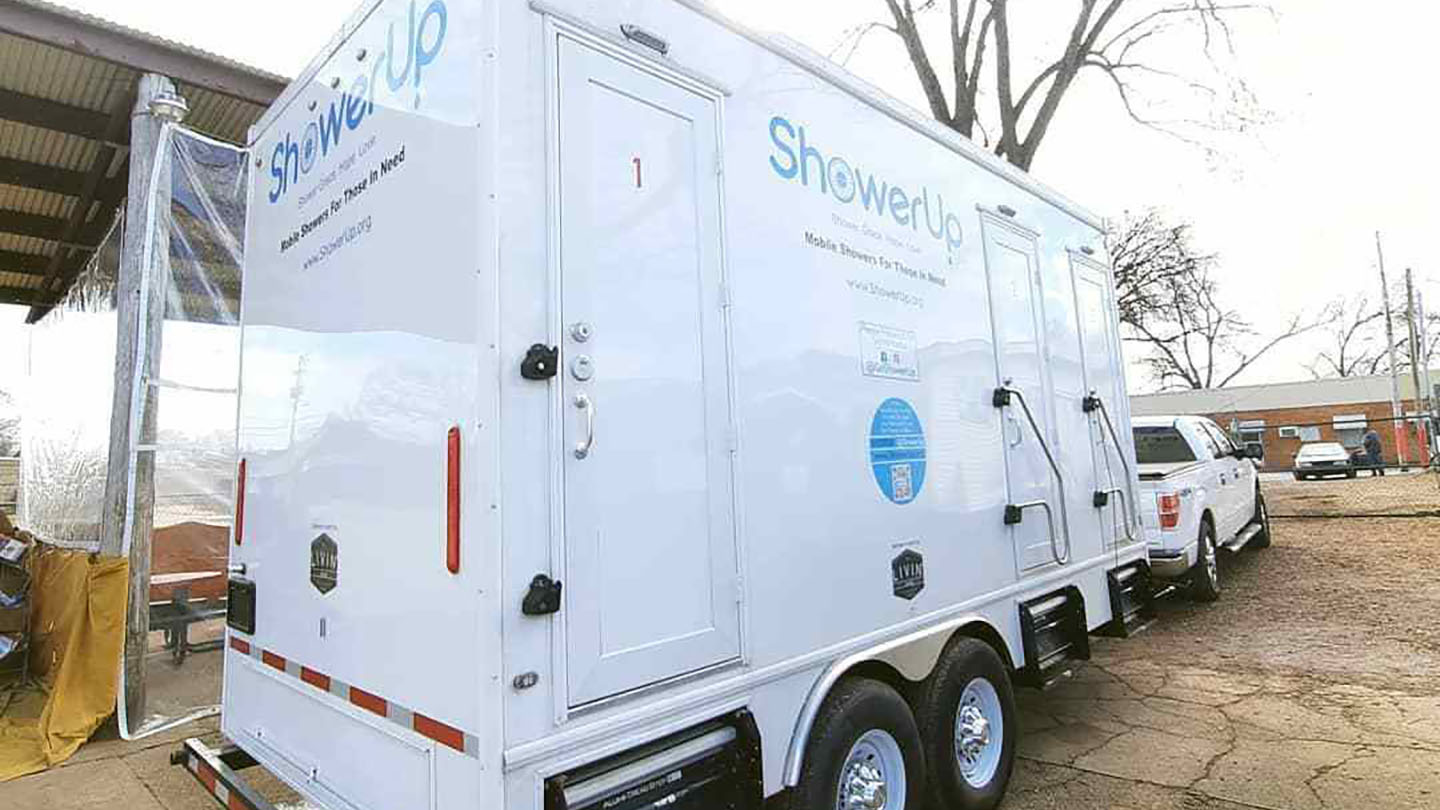 When Taylor Reed saw a need in his community, he stepped up to the plate to address it, helping to bring hope and renewed dignity to others through the launch of ShowerUp Huntsville, a 501(c)3 non-profit that provides mobile showers, personal care and hygiene supplies to the homeless.

An alumnus (B.S. Mechanical Engineering ’16) of The University of Alabama in Huntsville (UAH), a part of The University of Alabama System, Reed recently completed a six-year term on the UAH Alumni Association Board. While his day job is working as the Quality, Safety & Mission Assurance Lead for Advanced Research for the Missile Defense Agency (MDA), he says his passion for helping others comes from a deep wellspring of personal values he was taught and a belief in giving back to others.

“My inspiration for helping those experiencing homelessness comes from both my faith and the values my parents instilled in me,” Reed explains. “When I was in college at UAH, I was part of starting a new fraternity (Phi Kappa Psi), and part of that was trying to find a philanthropy cause to support. Based on a passion for helping the homeless, we started doing charity work to help those in Huntsville, specifically close to the UAH campus.”

These experiences led Reed to explore other groups with similar missions, resulting in a fortuitous connection in Nashville, TN. Like most cities, Nashville provides resources for its homeless population of approximately 10,000 to get meals, clothing and other necessities, but few opportunities for a hot shower and basic hygiene. This led Nashvillians Paul and Rhonda Schmitz to found the original ShowerUp organization in 2016 to provide showers and personal services to their community. Right away, Reed saw a chance to apply his philanthropic knowledge gained with the fraternity to help bring a new branch of ShowerUp to Huntsville.

“ShowerUp Nashville had been very successful, and after meeting with them and seeing their charity in action, the realization came that I didn’t have to reinvent the wheel,” he says. “Why couldn’t I just work with them to replicate their service and expand it to Huntsville?” 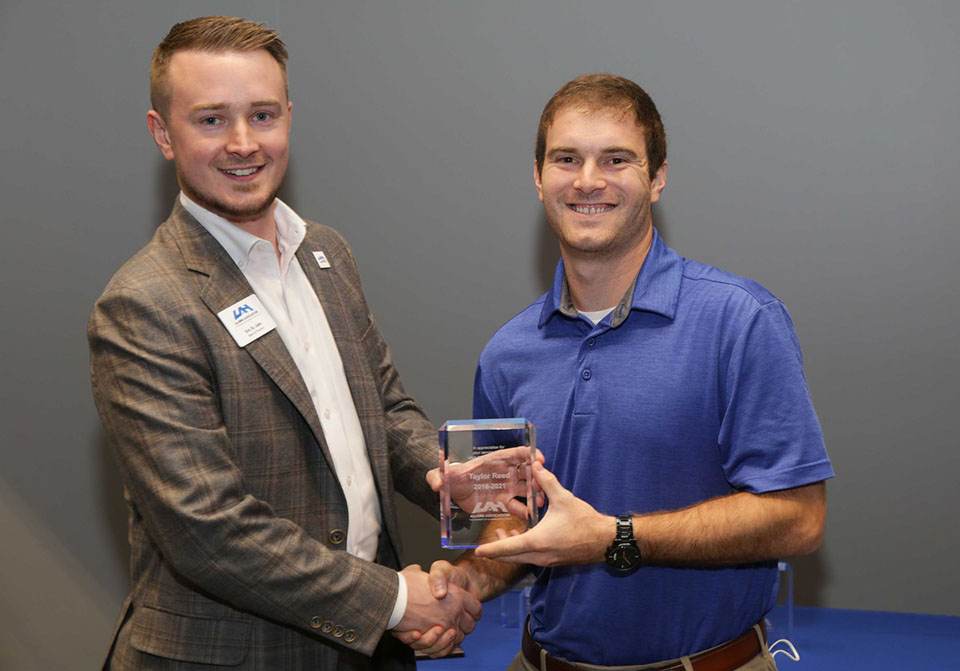 Eric St. John, President of the UAH Alumni Association Board of Directors, recognizes Taylor Reed at the 2021 annual meeting.

After an anonymous donor agreed to provide funds to build a custom shower trailer to launch the operation, ShowerUp Huntsville was born. For Reed, it was a whirlwind gestation that almost happened too quickly.

“I thought it would take much longer to raise the funds to launch, and that I would have time to form a team and find someone to actually be in charge. With the funds in hand, and no one else to take the lead, I began to realize it was gonna be me!”

As it became more apparent that he was going to have to be more involved than just running a fundraising campaign, Reed was compelled to jump into a leadership role once more, and, since May 2020, he has been overseeing the day-to-day operations of the group. He also coordinates special events and collaborates with local businesses, churches and organizations to form partnerships to serve the homeless. Little did he know that he would immediately be guiding his vessel of hope straight into the storm of a pandemic.

“COVID changed everything,” Reed says. “In the middle of the shut-down, the ShowerUp truck and trailer were delivered. When most businesses were shutting their doors, ShowerUp Huntsville was just getting started! This derailed my plans to have a large launch party. I was looking forward to having scores of volunteers, but at that time everyone was staying in their homes and away from events. Meanwhile, due to the economic downturn, many people were losing their jobs, and the number of people without access to showers was growing tremendously.”

Many times in that first year, Reed and his wife Lori were the only ones available to serve as many as 30 ShowerUp guests a day.

“But I was consistently uplifted simply by the kind words, the tears, the smiles and the gratitude from everyone who walked out of the shower doors feeling clean, refreshed and full of hope,” he says. “Once the pandemic started to slow and people became more comfortable stepping out of their homes, the volunteers started to show up and have continued to grow ever since.”

The shower units are designed as mobile trailers so they can go to where they are most needed, providing clean, safe and comfortable ‘shower suites’ with a shower, sink, plenty of hot water and basic hygiene supplies.

“It’s pretty simple,” Reed says. “All you have to do is plug into a water source and everything else is onboard. Essentially, you pull the shower trailer up to a location, turn everything on and you have hot water and temp-controlled rooms ready for showers. We have everything people need, washcloths, towels, soaps, shampoos, hygiene items. So folks really can just walk right up with nothing.”

I measure success based on the stories from our guests on what ShowerUp has meant to them, people who have said ShowerUp has helped them feel clean and confident to go to a job interview, restore a relationship with family members, or feel a part of society again.

Reed’s efforts, as well as those of his organization, have already made a powerful impact.

“Every life changed is immeasurable, so I do not like to focus on numbers,” the alumnus notes, when asked about the statistics of a mission best measured by service and love. “But we provided over 1,000 showers our first year in Huntsville and are on pace to well surpass that number in our second year. And each of those numbers represents a person who was greeted with a smile, given an opportunity to refresh, and, as one person told me, ‘feel human again.’ I measure success based on the stories from our guests on what ShowerUp has meant to them, people who have said ShowerUp has helped them feel clean and confident to go to a job interview, restore a relationship with family members, or feel a part of society again. People have even said a simple shower ‘changed my life.’ What we do is about so much more than making dirty people clean – it’s about giving hopeless people hope!”

Early on, certain special moments assured him that ShowerUp Huntsville was really ready to take off.

“At our first event, one man told me it had been over a year since his last shower, which blew my mind! But after talking with folks and truly understanding the need for showers in the area, I knew this was something that would take hold. Even now, as more and more people learn about ShowerUp and want to partner, it helps me realize this is something that is truly unique.”

Because ShowerUp Huntsville launched during the pandemic, Reed says, “There are still a lot of people who do not know who we are. But for those experiencing homelessness, they definitely know about us. We have many people who show up to one of our events to take a shower right off a Greyhound bus, brand new to Huntsville. They say they heard about us from several states away before they even got here. That still amazes me. Word travels very fast among those in need, and when there is an organization that provides a basic, important service such as showers, people share the good news.”

In the beginning, ShowerUp chose to locate its mobile units in areas of town frequented by those most in need. “Many of those who do not have access to showers also do not have access to reliable transportation,” he explains. “So it was important for us to meet the need where it was, and not make them come to us. Being mobile, we are able to go almost anywhere. This led us to picking strategic times and locations around the city. We set recurring dates and locations so people can count on when and where we’ll be. We also have a schedule on our website, as well as a texting service for text updates, to let folks know where we are. But primarily, word of mouth among the community in need travels faster.”

The organization also partners with other charitable groups to expand its reach to serve. “Partnering with other groups and having more volunteers is where we really thrive,” Reed notes. “At our larger events there is so much more going on than just showers. For example, if a group Like Manna House or First Stop is sponsoring a meal for the homeless, we can set up alongside them, and people can get fed and clean at the same place! We have volunteers cutting hair, playing music, serving a meal, sitting down and talking with folks and sharing community. We even have had chiropractic services and counseling. All those extra things are blessings which we can only provide based on the generosity of donors and volunteers.”

And, thanks in large part to a big boost from the success of the Huntsville branch, the ShowerUp movement is growing across the country.

“ShowerUp Nashville had never thought of expanding,” Reed says. “It was one team up there doing good works in their city. Once Huntsville came along and we wanted to replicate things here, it was really on a trial period to see how things went. Based on the success of ShowerUp Huntsville, the idea was born: why can’t we do this in other cities as well? This led to an entire restructuring of the organization. Not just thinking how we can operate on a micro, single-city scale, but how we could replicate it and operate to uniquely meet the needs of various cities!”

Since the launch of ShowerUp Huntsville, ShowerUp Wichita and ShowerUp Chicago have been formed. “It has been so cool to grow the organization in Huntsville and share our successes and lessons learned with the folks in Nashville to expand,” Reed says. “I truly believe that without the expansion and success in Huntsville, ShowerUp would not be in other cities today. Huntsville really sparked the idea, and the success here brought the realization that it was possible. So it is my hope that we can continue to grow and be able to serve those in need and fill this crucial and basic human need for people everywhere!”

One might wonder how Reed manages to juggle a day job as an engineer and still make time to manage a thriving charitable organization. He is quick to offer sound advice for those who choose to follow a passion.

“I have been blessed thus far through the pandemic which has allowed me to remote work and I do not have to commute,” he says. “I also do not watch TV. Apparently, the average Netflix user streamed 3.2 hours per day in 2020. So, using that math, not turning on the TV gave me an extra 22 hours a week I can commit to other things! I just think if you find what you are truly passionate about, your priorities will align, and you will find the time.”

Looking to the future, Reed says his group is still hoping to raise awareness with the general public who may have resources or ways they can help or partner.

“Being a non-profit, we run solely off of volunteers and donor support,” the UAH alumnus adds. “The more people who donate and partner, the more we can continue to do amazing things!”