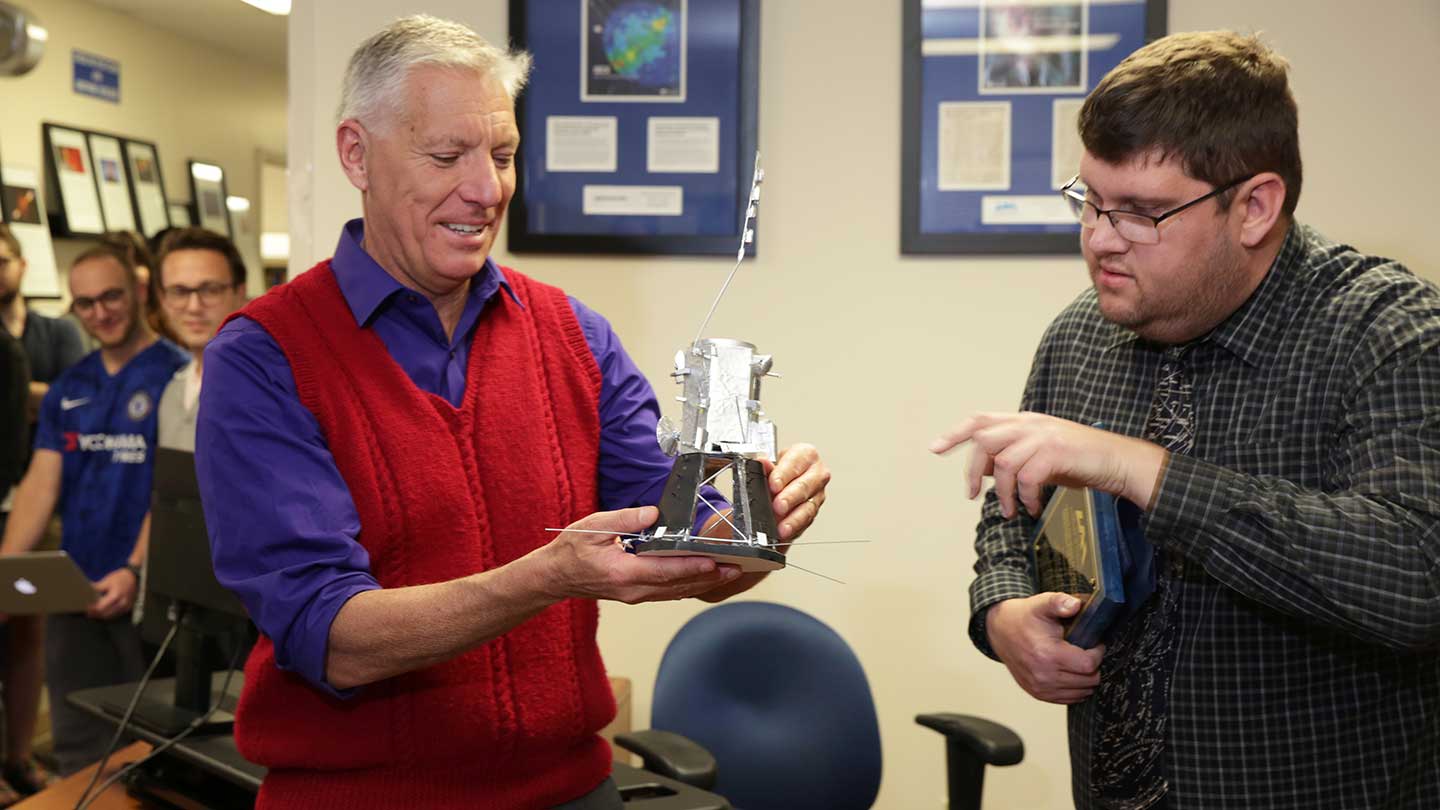 A unique model of NASA’s Parker Solar Probe (PSP) is now on permanent display at The University of Alabama in Huntsville (UAH) Center for Space Plasma and Aeronomic Research (CSPAR) in the National Space Science and Technology Center (NSSTC) in Cramer Research Hall.

About the size of two stacked shoeboxes, the model was custom crafted by Blake Parker, a 2013 mechanical and aerospace engineering graduate.

It was accepted on behalf of CSPAR by Dr. Gary Zank, CSPAR director and the Aerojet Rocketdyne chair of the Department of Space Science. With NASA’s Marshall Space Flight Center (MSFC) and the Smithsonian Astrophysical Observatory (SAO) as collaborators, Dr. Zank is a leader in the conception and development of the PSP mission and his team currently is analyzing data from it.

“It was quite moving to see the model Parker Space Probe – the last time I saw her, she was in a huge building at Applied Physics Lab about to be packed up and shipped off to Cape Canaveral for launch,” Dr. Zank says.

“Of course, PSP is larger than a small car, but this beautifully made to scale model is accurate in all respects but size,” he says. “Perhaps the model will capture and reflect back a little of the excitement that the mission is generating at CSPAR. Thanks so much to Blake. This is a special model of a spacecraft that is rewriting the science texts about solar physics.”

As a UAH student, Parker brought with him a longstanding goal of working for NASA. He recently celebrated five years as an International Space Station (ISS) stowage engineer working for NASA through Teledyne Brown Inc.

As far as Parker knows, it’s coincidence that his last name is the same as the one on the probe.

“Though there is no relation that I know of between Dr. Eugene Parker and I, it is great seeing my last name on such an awesome spacecraft,” he says.

“I had been a fan of the spacecraft even back when it was still called Solar Probe Plus,” Parker says. “There was definitely something attractive about taking a tiny spacecraft, loading it atop the most powerful rocket the U.S. had to offer, adding an extra stage and sending it hurtling toward the sun.”

In September he attended a seminar at the NSSTC by PSP lead scientist Dr. Nicola Fox, director of the NASA Heliophysics Science Division, and was inspired to start building the model.

“It’s kind of funny in retrospect that the NSSTC ended up as its permanent home,” Parker says.

He started making models at age 4 with Legos and was influenced in the ‘90s by an older friend’s Star Trek ship models.

“Also, my Dad had done a few car models, including one made to look like the real 1955 Chevrolet Bel Air that he had restored.”

His first solo model was the Revell-Monagram 1/48 scale B-17 Flying Fortress “Memphis Belle” when he was 8.

“It looked awful when I was done,” he says. “But I had fun making it, and that was the important thing.”

He’s no stranger to modeling spacecraft. He began paper modeling with a downloaded Mercury Redstone model around 2002. Since then, he’s employed variety of techniques.

“If there’s a commercially available kit, I’ll start with that, either paper or plastic. Other times, especially if it’s something from my own imagination, I will start from raw materials,” Parker says.

“I’ll often employ a technique called kit-bashing, where parts from existing kits are repurposed to form an entirely new creation. Back in the days before CGI, this technique was employed heavily by George Lucas’s Industrial Light and Magic effects shop to create many of the filming miniatures of the ships from the original Star Wars movies. For example, bits of Saturn V can be found all throughout the Millennium Falcon, X-Ying and Y-Wing miniatures.”

He’s currently working on a large-scale 3D printed replica of the U.S. segment of the ISS as a visual aid for training ISS flight controllers.

The PSP model build had its hurdles.

“All of the tiny details on the main bus of the spacecraft were quite challenging, mainly due to some combination of the tools I was using and my fingers not cooperating.”

When he’s manning the ISS console for NASA, Parker tracks inventory for the U.S. portion of the ISS.

“Recently, I have been leading a small specialist team within the main team that deals with all of the stowage aspects of a single, complex payload,” he says.

“This includes the list the crews use to find and return their equipment, on-station trash coordination and procedure reviews for that payload. It’s been a challenging experience, but it’s been incredibly rewarding seeing how the work we’ve done is impacting the world at large.”

He began to dream of working for NASA over two decades ago.

“It all started back in 1994, right around the time of the 25th anniversary of the Apollo 11 moon landing and the various events surrounding it.”

In addition to the knowledge he gained at UAH, Parker says the university provided opportunities to enter the aerospace workforce.

“Though I didn’t start out on the NASA side, working with the Systems Management and Production (SMAP) Center as a student researcher for the Army and working as a Peer Assisted Study Sessions (PASS) instructor for the Astronomy 106 course both contributed to skills that I find are useful now,” he says. “I gained experience with technical side and also with the personal side of being able to deal with people.”