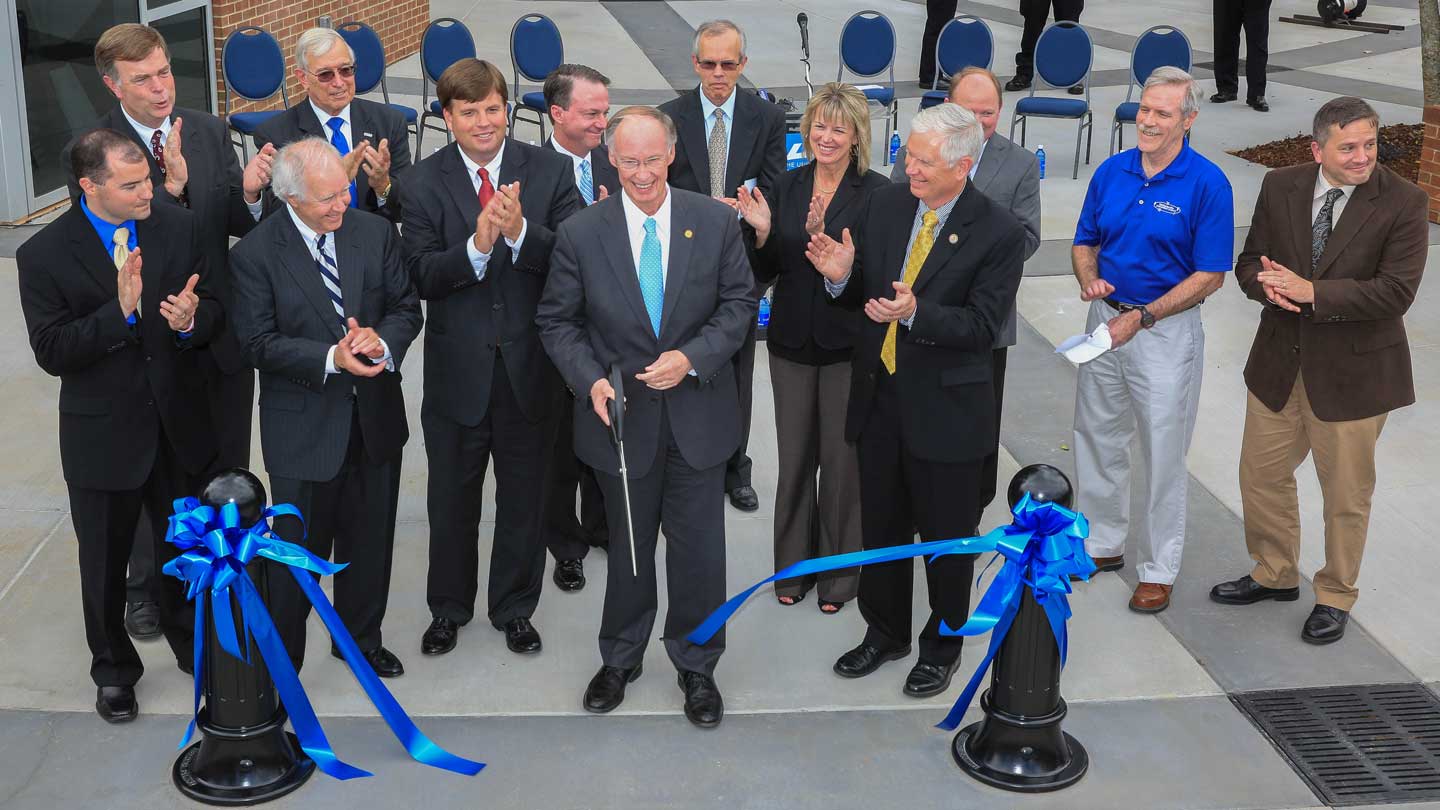 Built through a $7 million state grant made possible by Gov. Robert Bentley, SWIRLL grows UAH's severe weather and atmospheric science education and research capabilities and fulfills a recommendation of the state's Tornado Recovery Action Council to use state universities for severe weather research.

"It is our belief and hope that research conducted within this facility will save lives not just in Alabama but anywhere severe storms are a threat," said UAH President Robert Altenkirch. "Unfortunately, Alabama experiences frequent threats from weather events - from the Gulf Coast to North Alabama - and UAH researchers are at the forefront of finding ways to mitigate the impact of severe weather. We are truly appreciative of Gov. Bentley's vision and support of making Alabama safer for its citizens."

"UAH already has a reputation for top-notch severe weather research which will grow further as we are now free from many of the constraints brought on by a lack of facilities," says Dr. John Christy, Alabama State Climatologist and director of UAH's Earth System Science Center (ESSC). "The state of Alabama has made a loud and clear statement that we are going to address the threats to our citizens and will do so right here within the borders of our state, using the world-class expertise that has blossomed within UAH's atmospheric science program."

Through its Department of Atmospheric Science, ESSC, the National Weather Service forecasting office, the NASA Earth Science research team and the Office of the Alabama State Climatologist, UAH has developed a solid national weather and climate reputation. UAH's ESSC is one of the university's largest research centers and the university's atmospheric science department is ranked 17th in the nation in research activity, according to the National Science Foundation. The Atmospheric Science Department is also cited as being among the top 10 in the nation in scholarly production by the Chronicle of Higher Education.

SWIRLL will attract national field programs, visiting scientists and top-tier graduate students, Christy says, adding that the graduate program has already seen heightened interest "because just the anticipation of SWIRLL has drawn them to UAH."

The SWIRLL building is designed to reflect its mission, with a prominent, tornado-shaped staircase as a key part of its architecture. A five-foot diameter globe is mounted in the center of the lobby's staircase to serve as a dazzling teaching tool. The globe is a mini-theater upon which are projected images of the Earth depicting real-time weather patterns, rainfall, snow and ice, earthquakes, vegetation, lightning, drifting continents and more. It can also display the sky at night.

"You can't imagine the infrastructure it takes to house, maintain and operate the sophisticated vehicle fleet we utilize, so providing a secure base for them is essential. Then, the facility provides an operations hub - with computational resources - to direct assets, acquire real-time data and later to process and examine the information retrieved," Dr. Christy says. "Add to that the labs for developing new sensors and instrumentation for better and earlier detection of dangerous events, along with the educational facilities, and we have a start-to-finish opportunity for students and researchers to study some of the most serious threats to Alabamians."

One main research group will use SWIRLL to study severe weather and the other will investigate lightning. Both groups will build and test experimental sensors to better detect severe weather or lightning and understand the precursors of the events. They will deploy these instruments in planned and spontaneous programs to field-test the equipment and gather data.

Dr. Kevin Knupp, a professor of atmospheric science who is the originator of the SWIRLL acronym, leads much of the UAH severe weather research into those types of weather that damage infrastructure such as tornadoes, hurricanes and strong thunderstorm winds.

"I could not be any happier," Dr. Knupp says. "The UAH mobile atmospheric research facilities present today have their roots in the early 1990s with the purchase of a 915 MHz Doppler wind profiler, and Dr. Richard McNider is gratefully acknowledged for his help. Initially, the supporting infrastructure was my own garage at home and my own vehicle."

Since that time, funded research has expanded the capabilities of these mobile facilities, and UAH has provided increasing support to provide a much-improved infrastructure.

"The SWIRLL provides the infrastructure and leveraging that will significantly increase our competitiveness to acquire external research funding in severe and hazardous weather, lightning, air quality, short-term forecasting and many other areas of atmospheric research," Dr. Knupp says.

The lobby areas on the first and second floors will also accommodate outreach activities to K-12 and other community groups.

Dr. Hugh Christian, a principal research scientist with the ESSC, leads the UAH lightning group, which has been the world leader in detecting lightning from space. He led in the design, construction and operation of these space-based instruments as well in the follow-on scientific analysis of the data they observed.

"The laboratories will supply resources needed to develop a new ground-based lightning detection network that will provide insights into the physics of lightning and cloud electrification processes, and will become the primary site for ground validation and verification of the new Geostationary Lightning Mapper, which will greatly improve severe weather monitoring," Dr. Christian says. "Further, SWIRLL facilities including laboratories, the high-bay and balloon room will facilitate the development of a unique balloon-based electric field and lightning triggering system that will have applications for improved understanding of how clouds electrify and will enhance safety for ground-based, aircraft and space launch operations."

With a higher population density than the Plains combined with the difficulties of detection in the humid environment, Alabama has experienced considerable damage and loss of life from tornado outbreaks in such years as 1932, 1974 and 2011.