COS alumna selected as a Disney's Animal Kingdom Wilderness Explorer 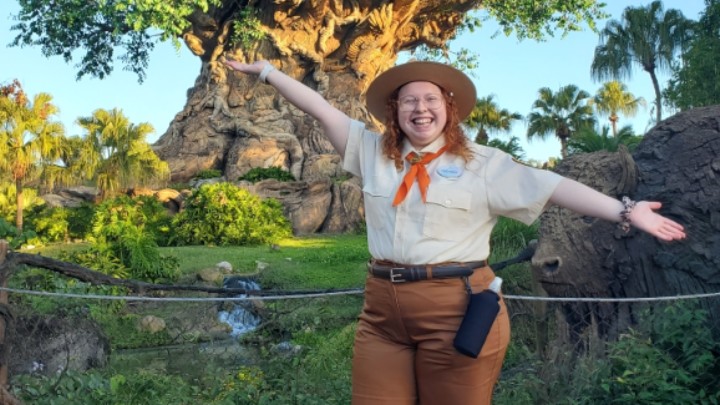 In the weeks leading up to graduation day, former Science Ambassador Cheyenne Robb (Fall 2021), patiently awaited what was eventually her offer to become a Wilderness Explorer at Walt Disney World in Orlando, Florida. Wilderness Explorers is a self-paced, scavenger hunt-like activity at Disney's Animal Kingdom Theme Park. Guests of all ages earn badges throughout the park, just like Russell did as a Wilderness Explorer in the Pixar film "Up." Robb will have the opportunity to teach about the environment, ecosystems, animal science, nutrition, and conservation through a range of activities.

A wilderness explorer is a friend to all, be it plants or fish or tiny mole.

Robb is a first generation college graduate from rural Alabama, where she says she had limited access overall to science-oriented experiences and information. For many regions, Robb explained, conservation and ecology are often “seen as taboo subjects, in a way. That’s where Disney is different,” Robb insisted, her entire composure brightening. "Since Disney is so large and so successful, it doesn’t have to worry about two or ten or a hundred people having opposing scientific views. If some people don’t come back, others will come in their place."

Disney has “the ability to breach areas that haven’t been breached” for these kids, according to Robb. Her main focus as a Wilderness Explorer is connecting with children who might experience the same things that she has. "Disney has that reach," Robb continues, because “it’s accessible. Think about how many millions of people go to Disney World every year and how many of those must be from the same kinds of places that I am. For some people, Disney is the only opportunity they have to gain a real interest in science."

Robb previously worked with the Birmingham Zoo in Birmingham, AL and the Cook Museum of Natural Science in Decatur, AL in conservation research and education. Robb worked alongside academic advisors and faculty members to curate a program that more aligned with her specific career goals. She graduated with an Individualized Bachelor of Science.

“What I’ve done speaks for itself,” she said with a surety. She hopes that she will be able to inspire others like her to do the same, no matter their background.