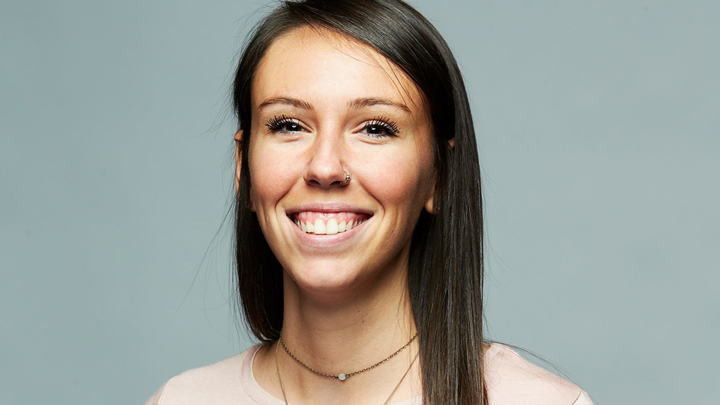 Katherine Strattman is a co-author of a paper in Nature magazine about the rapid growth of glacial lakes since 1990.

Katherine Strattman says that knowing where glacial lakes are located and how they’re changing over time is important because if a glacier retreats too far then there is risk of a glacial lake outburst flood that can devastate downstream communities and infrastructure.

As the glacial lakes study was being written, Strattman was pursuing her master’s in Earth system science at UAH under advisement by Dr. Robert Griffin, associate dean of the College of Science. She was the graduate research assistant for NASA’s SERVIR Eastern & Southern Africa and SERVIR West Africa. The glacial lakes study used research she conducted as an undergraduate at the University of Dayton.

SERVIR is a joint venture between NASA and the U.S. Agency for International Development to provide state-of-the-art, satellite-based Earth monitoring data, geospatial information and tools to help improve environmental decision-making among developing nations in Eastern and Southern Africa, the Hindu-Kush-Himalaya region and the Mekong River Basin in Southeast Asia.

A native of Indianapolis, Ind., Strattman says the glacial lakes research didn’t involve SERVIR but the results of the study may be useful for the glacier-related services developed by SERVIR Hindu Kush Himalaya and their partners at the International Centre for Integrated Mountain Development (ICIMOD).

“Glaciers are indicators of climate change because the systems are always working to attain equilibrium under changing climatic conditions,” she says. “Glacial lakes can form on the tops of glaciers – supraglacial – and at the glaciers terminus – proglacial – and can cause the associated glacier to lose mass due to ice calving. Growth of glacial lakes can also cause rapid retreat of a glacier’s terminus.”

The study relied on satellite data because measuring lake area and volume in the field is timely, costly and dangerous due to the mountainous and cold regions where glacial lakes are located.

“Remote sensing and cloud computing allow for global studies that span decades into the past,” Strattman says. “As with most remote sensing analyses, the results show that rates of growth differ across space, which means that the drivers of glacial lake growth also differ by region. Even within the same region there are differences in lake growth.”

For example, in Greenland glacial lakes grew by 12% during the 1990-2018 study period, which Strattman says means that some lakes showed large increases in volume while other lakes have decreased.

“Generally, glacial lakes at higher latitudes have grown more rapidly, likely due to global warming and the associated Arctic amplification, which also may explain why lakes at higher latitudes of the Greenland Ice Sheet are expanding while more southern lakes are not,” she says. “Identifying the drivers of lake growth for every region was beyond the scope of the project, but is something that will hopefully be investigated in the future.”

To piece together what was happening the glacial lakes for the study period of 1990 to 2018, scientists relied on huge five-year mosaics and one decadal mosaic for 1990-1999. The mosaics were made of 254,795 scenes from Landsat-4, -5, -7 and -8 to measure the glacial lake area and volume at a near-global scale.

“This is the first inventory of glacial lake area and volume at a global scale, which is really exciting to the glaciology community as well as the earth science community as a whole,” Strattman says. “Glacial lakes impact the hydrological cycle and provide freshwater and energy to communities globally.”