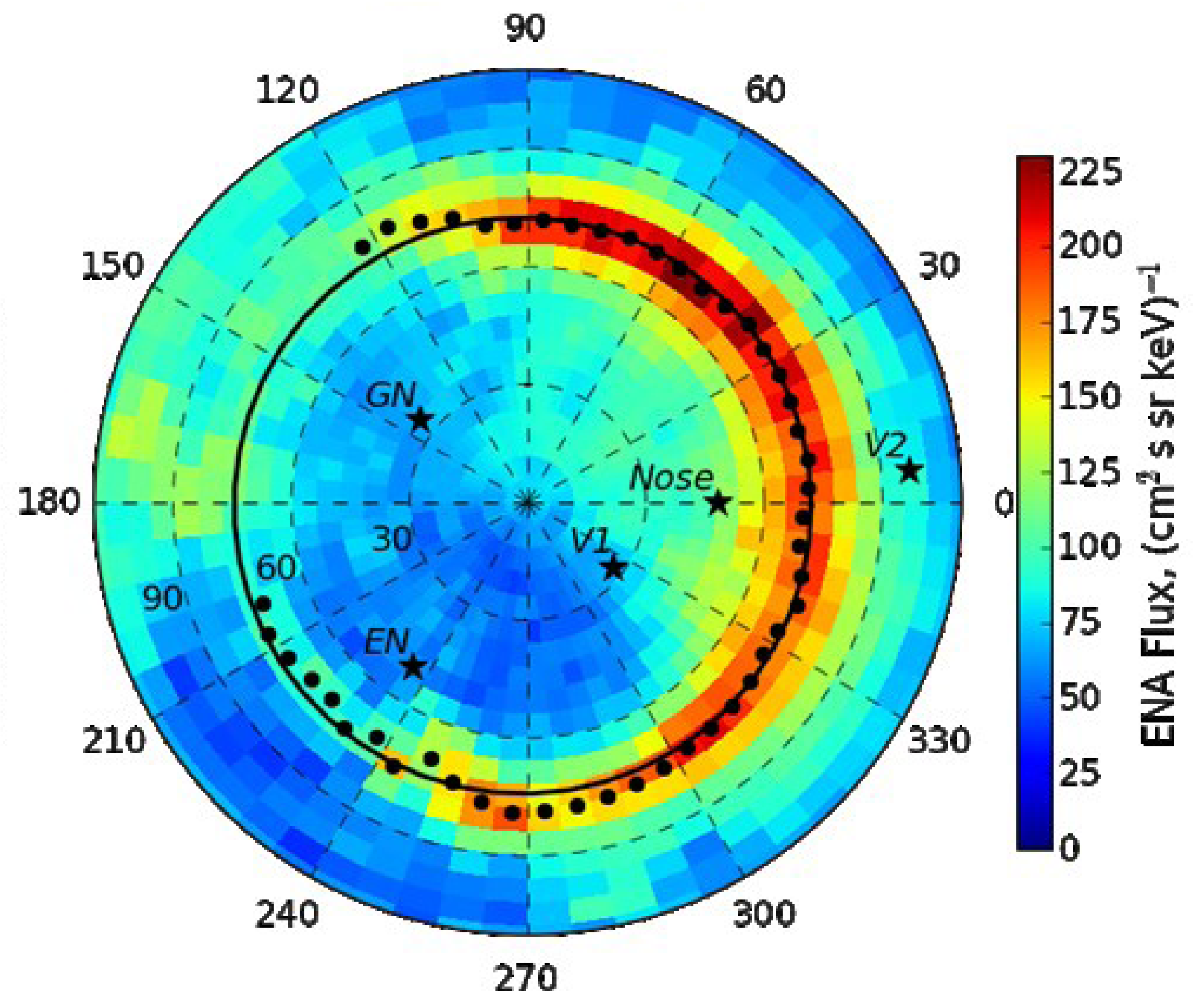 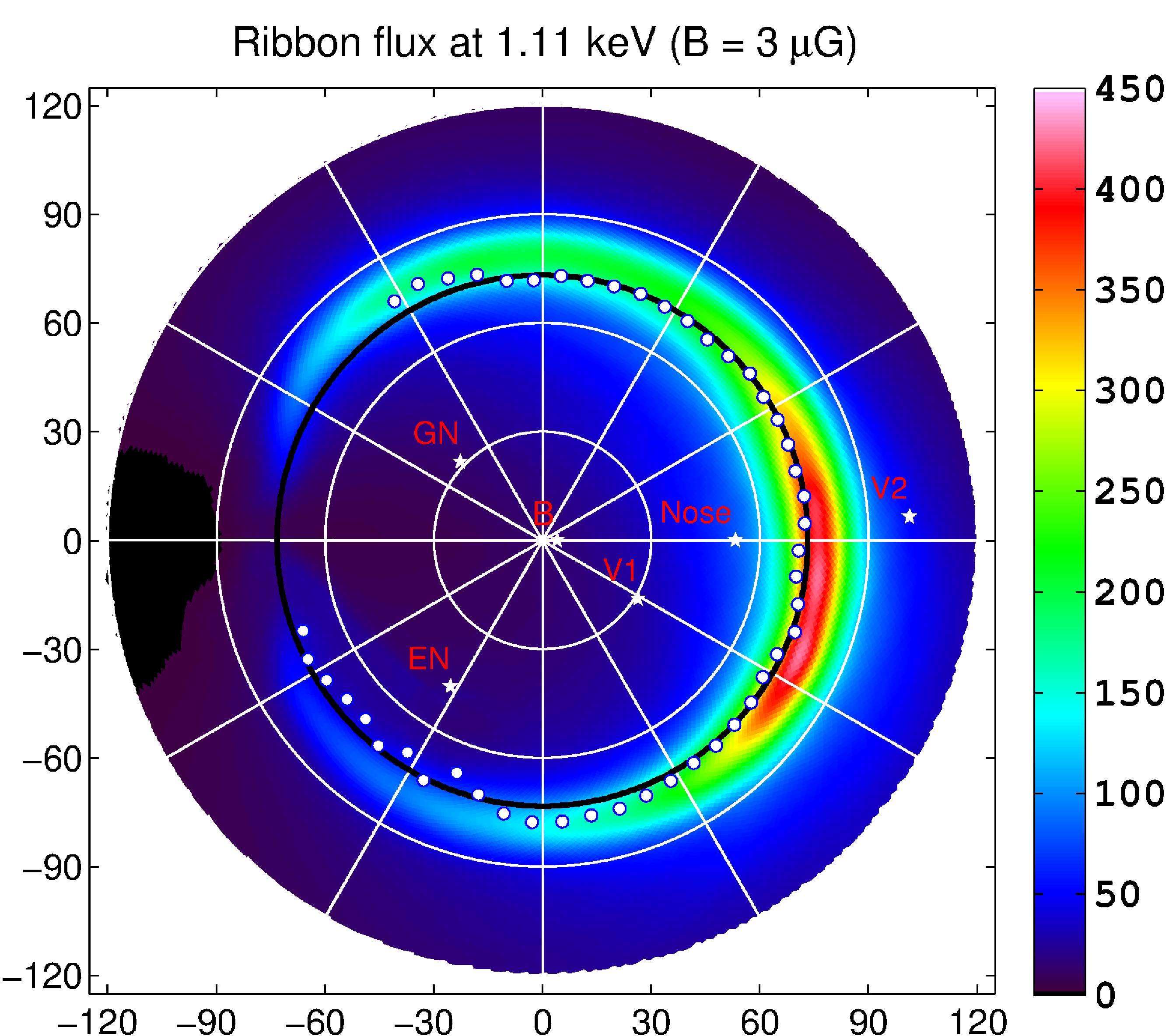 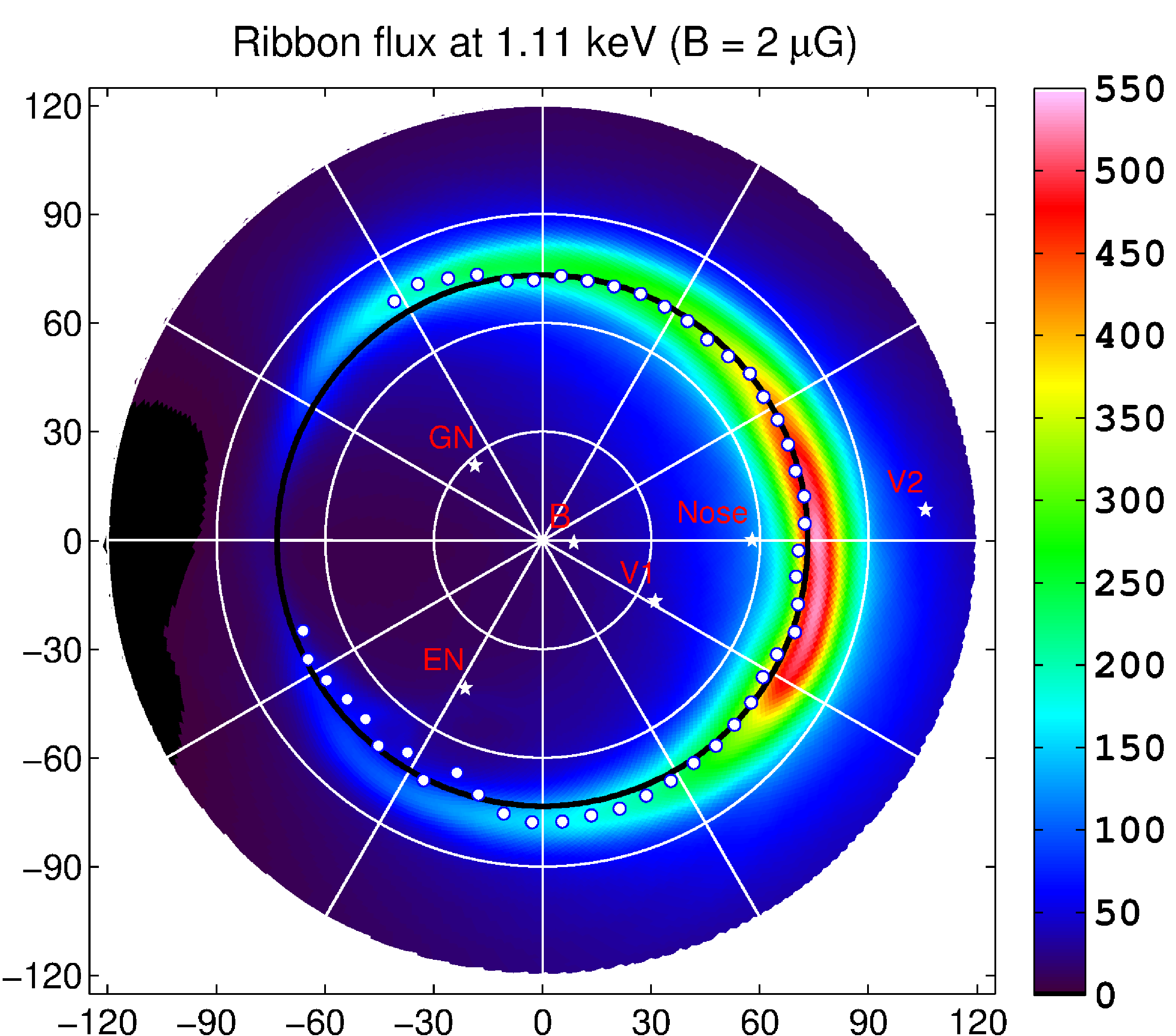 December 13, 2013 - The SPA department made another strong showing in the SPA (Space Physics and Aeronomy) section of the 2013 American Geophysical Union annual meeting in San Francisco. Our faculty presented 6 oral talks and 5 posters, while the graduate students had 8 poster presentations. Some presentation highlights include:

Prof. Jacob Heerikhuisen modeled the unexpected "ribbon" of energetic neutral atom flux seen in the IBEX all-sky maps. The ribbon appears to be very circular when viewed in the right projection (figure on the left). A number of global heliospheric simulations were performed to compare the observed ribbon with those predicted by our model for different interstellar conditions (figures on the right).

Ms. Neergaard Parker presented preliminary results from a model that diffusively accelerates particles at multiple shocks.  The basic approach is related to box models in which a distribution of particles is diffusively accelerated inside the box while simultaneously experiencing decompression through adiabatic expansion and losses from the convection and diffusion of particles outside the box. Her poster presented a preliminary application of the diffusive acceleration of particles by multiple shocks with frequency of occurrence appropriate for solar maximum (i.e., a non-Markovian process). The figure shows the daily average of particle distribution data for the lowest three energy channels of the EPAM instrument on ACE (solid line) and the corresponding model predictions (dashed line). 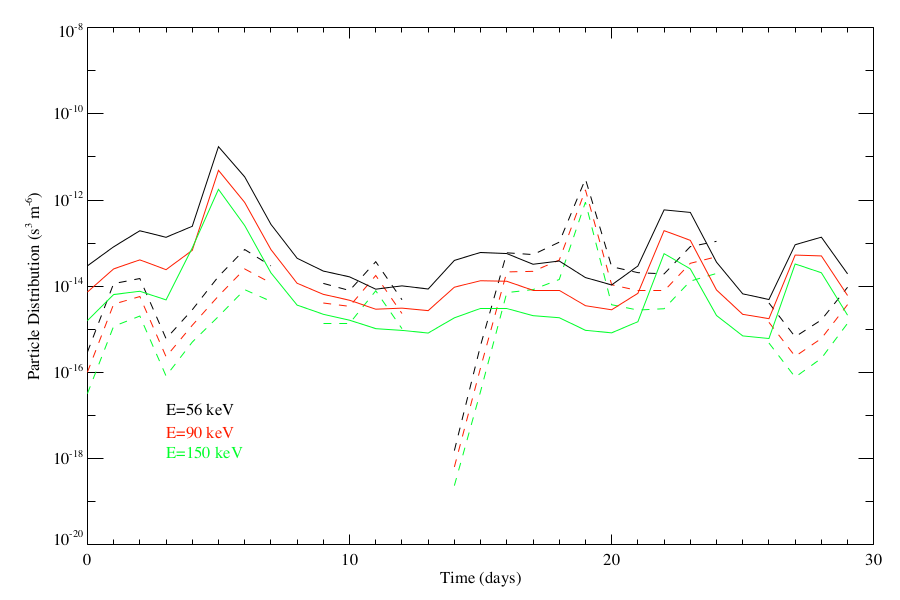 Prof. Vladimir Florinski discussed the 2012 Voyager 1 observations as the space probe left the solar system and entered the interstellar cloud enveloping the Sun and the heliosphere. His presentation proposed an explanation for the unexpectedly early crossing of the boundary as a result of a large scale intrusion of interstellar plasma into the heliosphere (left figure). The observed flat (pancake) angular distributions of heliospheric ions (middle figure, credit: S. M. Krimigis) were shown to be the result of magnetic shear preventing particles streaming along the magnetic field from crossing the boundary. The figure on the right shows a simulated angular distribution of 5 MeV protons in front of (isotropic) and behind (pancake) the heliospheric boundary. 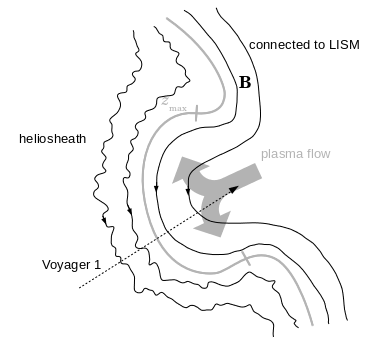 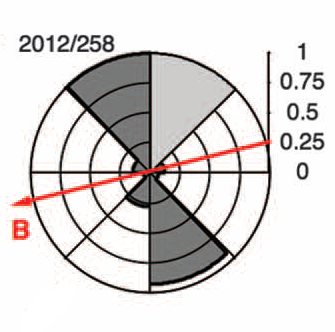 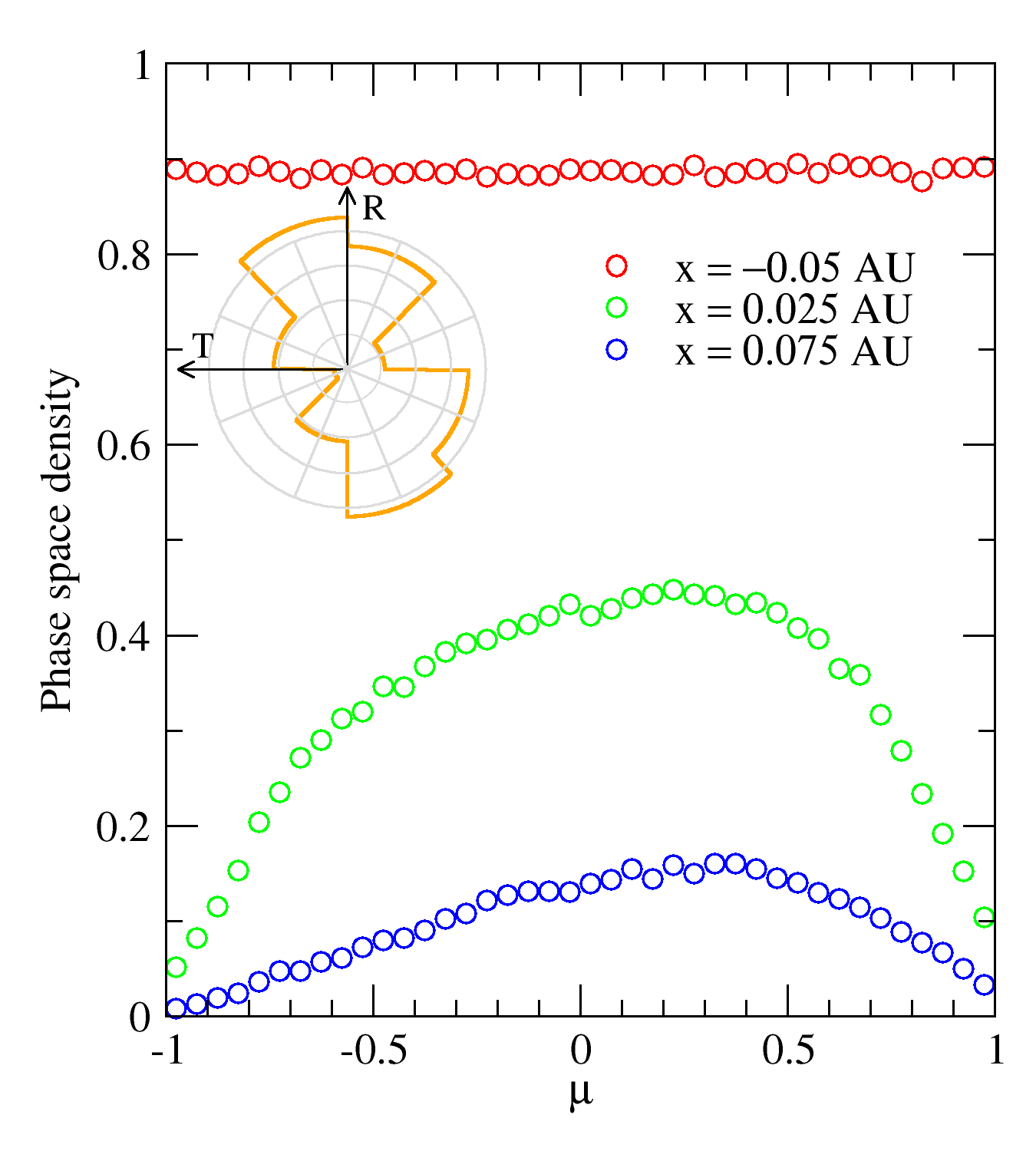 Mr. Eric Zirnstein' poster showed how enhanced IBEX ribbon flux evolves over time with the solar cycle. As a relatively slow neutral interstellar atom enters the heliosphere, the electron from the atom may jump to a faster solar wind proton, called charge-exchange, creating an energetic neutral atom. Unaffected by magnetic fields, the energetic neutral atom may exit the boundary separating the solar wind plasma and local interstellar plasma, and eventually charge-exchange with an interstellar proton. After another charge-exchange, a new secondary energetic neutral atom is created, that may then travel back into the heliosphere and be detected by IBEX orbiting Earth - where the greatest intensity of flux forms the so-called ribbon. Our simulations of this process shows that the ribbon flux of hydrogen atoms evolves over time with the solar cycle, out of phase by the time it takes this process to occur.