The Climate of Our Forefathers

Do recent hot summers (and 100 degrees today) signal a return to high temperatures seen in Alabama's past?

HUNTSVILLE, Ala. (June 29, 2012) -- Four hot summers in the past six years and June temperatures topping the 100 degree mark across the state have Alabama's state climatologist wondering if the state might be returning to the hotter summer climate that once was normal for this part of the country.

"You have to wonder if we are returning to the climate of our grandparents," said Dr. John Christy, Alabama's climatologist and a professor of atmospheric science at The University of Alabama in Huntsville, "although they would have suffered more because air conditioning wasn't nearly as common back then."

Average summer high temperatures across Alabama have been lower than historic norms since the record hot summer of 1954.

Using data from 75 weather stations from Greenville to Tennessee, Christy developed a set of temperature records going back to 1883. Looking only at average high temperatures for June, July and August, he found that the average for the past six summers was the hottest since 1952-1957.

While 2006-2011 was the hottest six-summer stretch in more than half a century, it was only the tenth hottest six-summer period on the 129-year record. That seems to eliminate manmade global warming as a likely cause for the recent hot summers, Christy said.

"Since these temperatures aren't higher than earlier temperatures, it doesn't look like 'global warming,' but more like a problem we still wrestle with: unpredictable natural variability," Christy said. "No one really knows what triggers these natural shifts in the climate."

Despite the recent warm summers, Alabama's long-term summer temperature trend over the entire 129-year period is cooling at the rate of about 0.12 degree Fahrenheit per decade. That means summer high temperatures for the several summers before 2006 were about 1.5 degrees F cooler than they were in the late 1800s and early 1900s.

That won't make it any cooler outside this weekend.

The hottest summers in the 129-year record were 1954, with an average summer 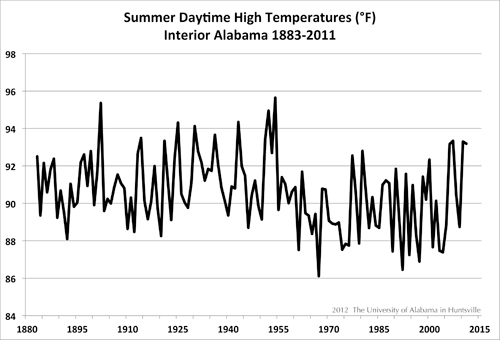