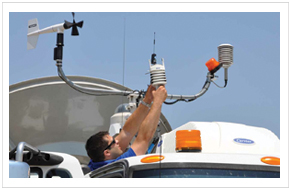 "It's flattering, I guess, although it's stressful at the same time," he said recently. "It's much more fulfilling to be needed than the opposite."

(Adam Sherrer, left, adjusts instruments on UAHuntsville's Mobile X-band radar, setting up near New Market to gather data on storms as they grow.)

Although several students are volunteering time for both, Sherrer, a graduate student in atmospheric science, is the only person officially splitting time between two National Science Foundation-funded research campaigns studying thunderstorms in North Alabama.

For one program — the Deep Convection Clouds & Chemistry Experiment (DC3) — Sherrer operates the university's mobile Doppler radar, setting up in a field just west of New Market to give scientists a stereoscopic radar view of what is going on inside of summer storms as they blossom and grow.

For the other project — the Atmospheric Boundary Identification and Delineation Experiment (ABIDE) — he mans a van pulling a trailer loaded with instruments that look straight up into the sky, setting up near atmospheric boundaries where storms might form at or just after twilight. 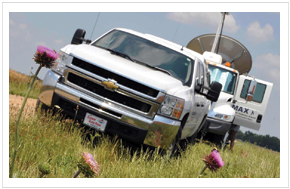 Since one program looks at storms that form from mid-morning to dusk, and the other picks up about sunset, "there is the possibility of a DC3-ABIDE (back-to-back) deployment, so could I be out from 10 a.m. to 3 a.m.," said Sherrer, 26. "I guess I'll be taking along some Five Hour Energy and Red Bull. I'll have to have something."

"It's difficult to see what's going on aloft unless you have eyes to see," said Dr. Kevin Knupp, a professor of atmospheric science and director of the ABIDE program. "In our case, it's going to take radars. That's what lets us see what is happening inside of the circulations that generate storms."

"We have the university's set of instruments, plus ARMOR and two regional networks of lightning sensors all right here," said Dr. Larry Carey, an associate professor of atmospheric science and the local project coordinator for DC3. "We also have the Weather Service's advanced Doppler at Hytop. That gives us three dual-pol radars, so that's pretty cool."

(Advanced dual-polarization Doppler radar gathers more data from a storm than previous Doppler radar, helping meteorologists and scientists identify, for instance, whether particles in a storm cloud are rain or hail, and letting them track vertical wind inside a storm cell.) 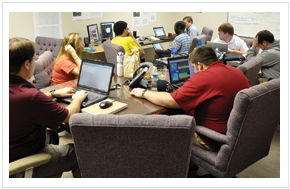 (A multi-institution team of scientists and students, right, gathers data for the DC3 morning planning briefing)

DC3 is looking not so much at how pop up storms ... pop up, but more at how those storms change the chemistry in the local atmosphere. Thunderstorms pull in air near the ground, push it up through the storm and send it out at the top. That means thunderstorms are fairly efficient at moving chemicals, including pollutants, from near the ground up to the edge of the stratosphere.

At the same time, some chemicals are absorbed into water droplets or ice particles inside a cloud and fall out with the rain, sleet or hail, taking some chemicals from the upper atmosphere and depositing them onto the ground.

One point twenty one gigawatts?

Not only do storms rearrange the atmosphere, they also generate their own chemical reactions. When lightning heats the air to temperatures approaching that on the surface of the Sun, for instance, nitrogen and oxygen in the air are flash melded into nitrogen oxides (NOx). NOx is a particular concern for pollution control: Exposed to sunlight and heat, NOx reacts with certain organic compounds (called volatile hydrocarbons) to form ozone, a significant pollutant down here where people live.

One of DC3's goals is to determine how much NOx a typical storm might produce. To accomplish that DC3 will use the local instruments, including a unique array of sensors that measures the power generated by each bolt of lightning, plus two aircraft collecting air samples around each storm — one from the inflow near the surface (if you see a NASA DC-8 apparently cruising the tree tops ...) and the other from the outflow near the top of the cloud, so scientists can compare the chemical composition before and after.

"If there is this amount of NOx going in and that amount coming out, then the storm had to produce the difference between the two," Carey said. Using those numbers, and counting the number of lightning strikes and measuring their energy output through several storms, he hopes to tease from the data information about how much NOx is created naturally by lightning.

While Carey and DC3 are studying the chemistry of storms whose physics are reasonably well understood, Knupp and ABIDE are trying to understand the physics of storms that seem to develop as if by magic. Specifically, "6 o'clock magic".

"It refers to the quick development of thunderstorms around the 6 p.m. time frame," said Knupp.

His team will spend the next two summers studying squalls and storms that may seem to mysteriously appear during or just after the transition from afternoon to evening. As the day cools into evening, rising columns of warm air generated by sunlight slow or break up. A calmer, slightly cooler layer of air (Alabama in summer doesn't do "cool," just cooler or not as hot) initially forms near the ground.

Freed from the turbulence caused during the day by rising heat, wind speeds just one or two hundred feet above the ground can stabilize and accelerate. Add an atmospheric boundary to pull in that wind and early evening storms can spring up even after a cloudless afternoon.

"What we know to this point is, it happens along boundaries that are mature and are driven in some cases by differential heating," Knupp said. These boundaries are where air masses of different temperatures meet, such as the cooler air under a cloud and a warmer, adjacent sunlit space. A boundary might also form when rain falls on one area but not the one next to it on the previous day.

Other boundaries in the air are formed due to varying temperatures above different surfaces, such as hot parking lots and urban areas, warm farm fields, cooler suburbs, still cooler forests and even cooler lakes and large rivers. One of the team's first chances to collect data on this phenomenon was a serendipitous early evening storm that popped up while Knupp's team was studying the effects Wheeler Lake has on local winds.

"If one of these boundaries persists into the afternoon-evening transition, that boundary can be a source of initiation for storms," Knupp said. "You will see wind converging on these boundaries and being pushed upward where they come together. Because these winds are accelerating just above the surface at dusk, the updraft is stronger and that can push warm air from near the surface high enough to trigger a rain event."

A rain event like this happened in north Alabama several times in the past two weeks. These storms are little studied and somewhat uncommon: "Almost every time I see one I'm surprised," Knupp said.

The team is also studying pop up storms that appear along atmospheric boundaries later in the evening, usually after there have been thunderstorms during the day. While they have been little studied, these evening storms are more common: "If you look at the eastern two-thirds of the U.S. during the summer, you are likely to see that happening somewhere," Knupp said. "It happens fairly regularly."

As part of his work with ABIDE, Sherrer will set up a mobile suite of upward sensing instruments directly beneath a boundary, then launch weather balloons to collect even more data. In some pre-lightning cases, they may attach instruments to a balloon that can be raised and lowered several times on a tether hundreds of meters long.

Finding a clear air boundary in the atmosphere can be a challenge, although the UAHuntsville team has one abundant local ally: Bugs. Lots of bugs.

"Any time there's an updraft, it leaves a signature on the radar, a thin line," Knupp explained. "That's where the rising air is carrying insects upward. If there is an updraft moving more than about two meters per second, that will typically loft flying insects. The radar can pick them up, so we're actually dependent on insects when sampling in the clear air."

While Sherrer doesn't have an official topic for his thesis research, ABIDE and DC3 aren't his first field expeditions. He participated in on-site data collection at two tropical storms and hurricane Gustav, was part of a project studying major winter storms from the Great Lakes to north Alabama, and with another field campaign chased tornadoes across the Midwestern plains — with limited success.

"You couldn't tell it was a tornado, it was so large. It looked like a wall cloud sitting on the ground. From our perspective, even that far away, you couldn't discern any shape."

Although he has started work on a project with Knupp related to the April 27 storms, Sherrer says his options are still open.

"I don't know where I'm going to land at the end of these two projects," he said. "I'm just now dipping my toes into what you could call research." 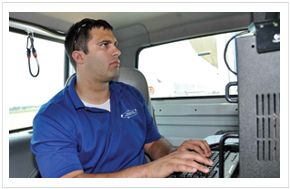 DC3 is an NSF-organized campaign that runs through the end of June. It involves several universities, research organizations and federal agencies. To increase the odds of having a good supply of pop-up storms, the project involves scientists at three sites: Colorado, Oklahoma/Texas panhandle, and north Alabama.

In addition to having more storms to study, having three such different sites gives scientists an opportunity to look at how storms and the chemistry in them vary from region to region. North Alabama, for instance, has significantly more plant life. Local forests are a major source of volatile hydrocarbons, which mix with NOx formed in storms to create ozone.

Even the physics of storms seems to be different. The radio of cloud-to-cloud vs. cloud-to-ground lightning in a typical thunderstorm in this region is approximately 3-to-1. In Colorado it averages 10-to-1.

ABIDE is a local NSF-funded campaign run through UAHuntsville. It is a three-year program in its first season in the field.