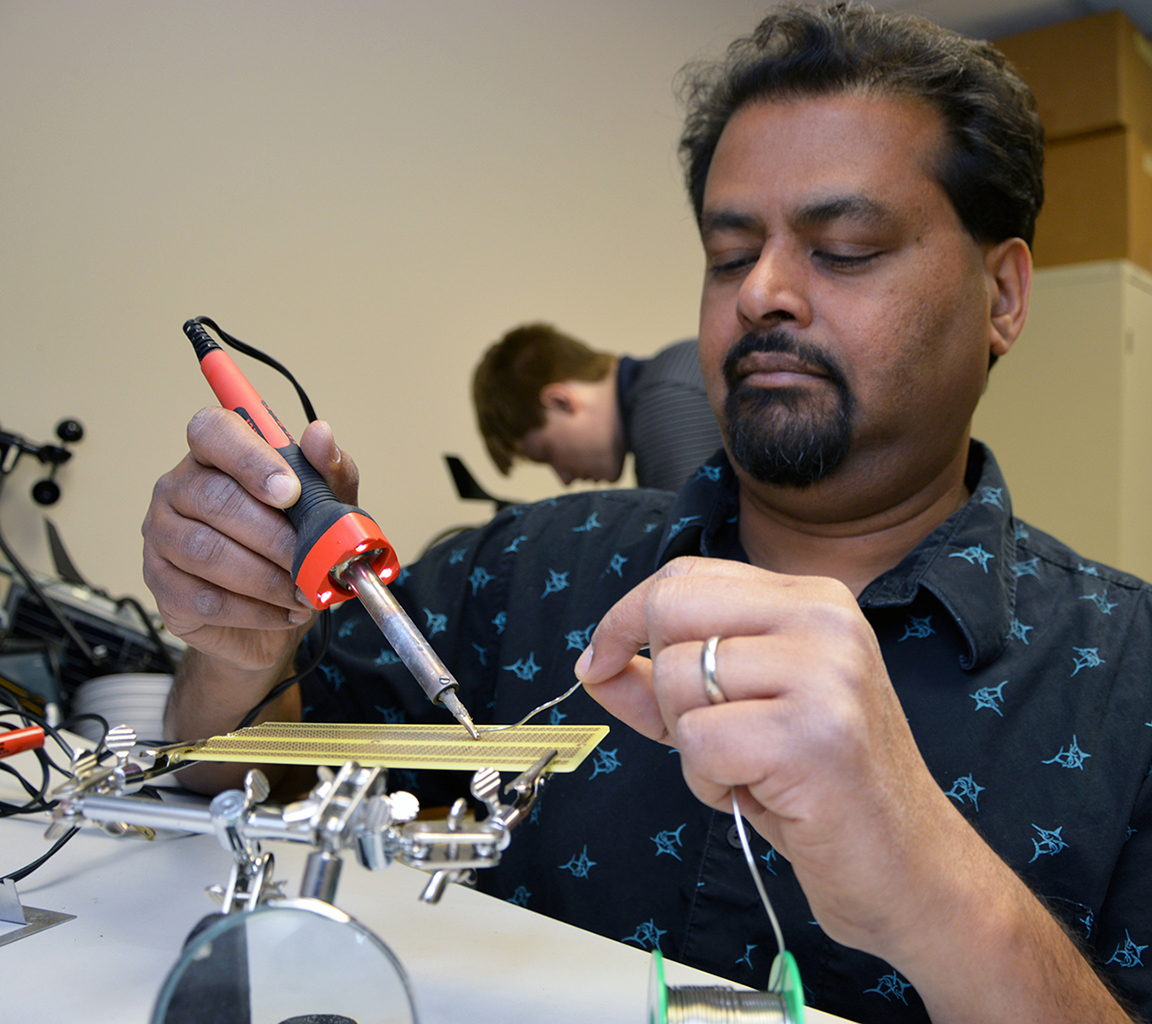 HUNTSVILLE, Ala. (April 19, 2018) — A grid of low-cost weather stations built at The University of Alabama in Huntsville (UAH) will spend part of this summer in Nebraska helping scientists learn more about how large-scale irrigation might be changing the weather.

Like skinny metal scarecrows peeking over a shifting sea of corn, the UAH Environmental Monitoring, Economical Sensor Hubs (EMESH) stations will track temperature, wind speed and direction, humidity and other weather variables across parts of Nebraska. They will be looking for clues about how irrigation in one part of the state might be influencing weather in less-irrigated areas nearby.

Supported by a $260,000 grant from the National Science Foundation, UAH's Dr. Udaysankar Nair, an associate professor of atmospheric science, plans to have up to 100 of the small EMESH stations built in time for the summer research campaign.

"We did some numerical modeling, and when you put in large-scale irrigation it's going to cool the air right overhead," Nair said. "You also have more moisture to form clouds, but immediately overhead and downwind of that you actually get reduced rain. The models show the moisture being piped to other areas."

UAH's sensor network will be part of a larger campaign organized by Nair and Dr. Rezaul Mahmood at Western Kentucky University. In addition to the EMESH packages, the campaign will include mobile Doppler radar units, weather balloon launches and a dozen ground stations to measure the flow of energy near the surface.

Nebraska leads the nation in irrigation, with about 8.5 million acres of irrigated cropland and pasture.

The campaign is being conducted in coordination with the University of Colorado, Nebraska's Agricultural Extension Service, the Nebraska Department of Natural Resources, the National Center for Atmospheric Research, and the Center for Severe Weather Research.

Development of the EMESH (no relation to Emesh, the Sumerian god of plants) stations was funded through an internal grant through UAH's vice president for research. Nair and his graduate students spent two years trying different combinations of low-cost weather sensors, computer circuit boards, Internet modems and acronyms.

While Nair's $450 instrument packages aren't quite as accurate as research hardware that can start at $1,000 per stand, they are accurate enough to be useful — especially when used to cover large spaces. Some of the early packages included air quality sensors.

"The meteorology is actually pretty high quality," Nair said. "The accuracy of our stations is about the same as automated weather stations installed by the National Weather Service, the FAA and the Department of Defense."

Another advantage is that EMESH can be built to communicate via cell phone between the instrument stands and the operator. That eliminates the need to return periodically to the study site just to download data. It could operate anywhere there is an active cell phone network or, where no network is available, it could use either a satellite telephone or a satellite dish link from almost anywhere on Earth.

The idea to develop EMESH started after an earlier research program, in which Nair was frustrated in his attempts to understand the effects of lowland deforestation on glaciers atop Mount Kilimanjaro in Africa. Without detailed data from different points along the mountain's slopes, Nair couldn't confirm early findings indicating deforestation might cause substantial changes to rain and snow fall along those slopes. That includes snowfall on Kilimanjaro's famed glaciers.

With a dense network of stations from the mountain's bottom to its peak, "you can not only sit in a cloud on top of the mountain and study it, you can relate it to airflow coming from lowland regions," Nair said. "You could study how land use change effects air flows coming up the mountain."