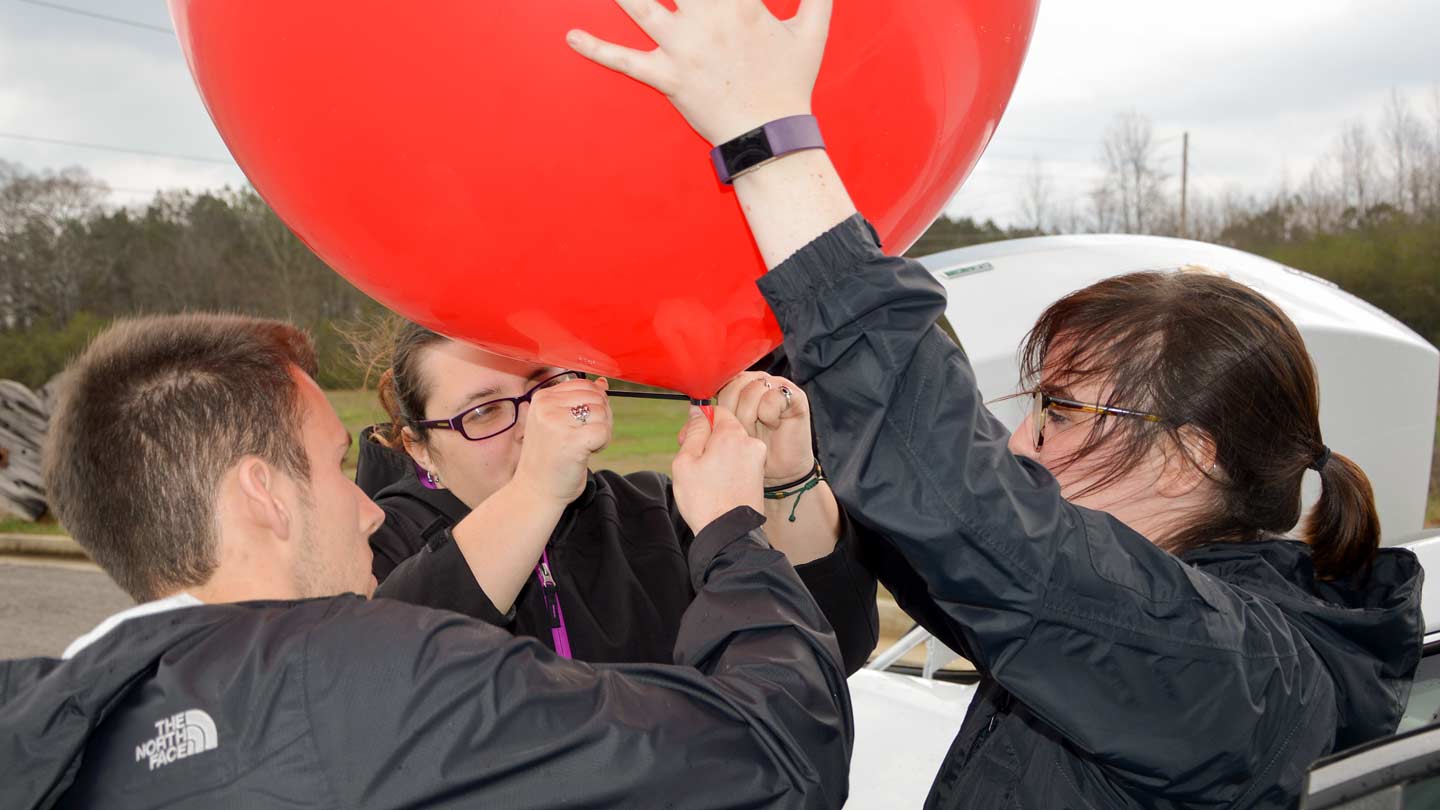 Three UAH undergraduate students attach the instrument payload to a balloon they are preparing to launch near Sand Mountain.

Bad weather in March, April and early May will bring a virtual cloud of weather balloons to North Alabama, as scientists from around the U.S. gather to study the challenges of predicting which storms spin up tornadoes across the Southeastern states.

Mixed in among the roughly one dozen oversized white "official" weather balloons launched at one time will be a couple of what might appear to be bright red, extra large party balloons carrying scientific instruments so small and light they fit inside an 8-ounce Styrofoam coffee cup.

These somewhat smaller balloons will be launched into storm fronts by members of UPSTORM, a UAH undergraduate club, as part of the VORTEX Southeast (V-SE) tornado research campaign.

"It'll be fun and a good learning experience, too," said Adam Clayton, an UPSTORM member and a UAH junior majoring in Earth system science. "This year the program is a lot bigger, so more people will be involved and there will be more opportunities to launch balloons."

Service, training and professional development were the goals Ryan Wade, a lecturer in UAH's Atmospheric Science Department, had in mind when he came up with the idea for an undergraduate sounding balloon organization. And while the students learn, the balloons collect scientifically useful data.

"The littlest balloons (they come in 18, 24 and 36 inch widths) have a maximum altitude of from 15 to 30 thousand feet, while the bigger balloons can reach 60 to 90 thousand feet," Wade said. "But the real value for us is in the boundary layer nearest the surface.

"This gets us down where the tornado lives. And it allows us to launch multiple balloons at the same time into a storm."

"The UPSTORM program is incredibly useful to our operations," said Chris Darden, meteorologist in charge at the Huntsville office of the National Weather Service. "The nearest upper air balloon sites are in Nashville and Birmingham, so we are in a bit of an observational data hole. When these soundings are done it gives us a much better idea of the pre-storm and near storm environment, and allows us to assess the potential for all types of impact weather depending on the conditions, including tornado potential. A huge help!"

The small instrument packages include temperature and humidity sensors. Wind speed and direction, as well as altitude, are calculated from the GPS unit that helps the team retrieve the tiny payload. While the instruments UPSTORM teams launch as less expensive than those launched by the National Weather Service and the well-funded research teams participating in V-SE, reusing instruments is one way that UPSTORM holds down the cost of its part in this program.

In addition to UPSTORM and UAH, V-SE will bring to north Alabama balloon launch teams from Texas Tech, Mississippi State, Purdue, Louisiana-Monroe, Colorado State and NOAA. They will spread out across North Alabama, from Mississippi to Georgia and from about Cullman to southern Tennessee.

Some of the lessons learned by UPSTORM members over the past two years are about the nitty-gritty details of running a scientific experiment out in the open atmosphere.

"The most memorable flights are the ones when something goes wrong," said Kaitlyn Pate, a senior ESS major and the UPSTORM club president. "We had one flight where it was very windy and cold in the upper atmosphere. (The balloon) would rise into that cold air and freeze, then sink back into warmer air. Then it would thaw and rise back up.

"After it did that a few times, we had to pull the plug on that one instead of waiting for it to get high enough to pop."

Normally, when the balloons rise high enough the helium expands enough to burst the balloon, which can fly from Alabama into either Tennessee or Georgia. The coffee cup payload is so light it flutters to the ground without needing a parachute.

"I've heard stories of at least two that landed in people's back yards," Pate said. "I believe one landed in a cul-de-sac. A guy was taking out his trash and the payload landed next to his trashcan. He was really fascinated by it."