A patent was recently awarded to Sean Entrekin, Dr. James B. Blackmon, and Dr. D. Brian Landrum of the UAH Propulsion Research Center (PRC) for a new approach that increases the performance of RBCC Propulsion Systems. This new concept uses so-called plug nozzle engines exterior to, and nested around, the air breathing engine nozzle. 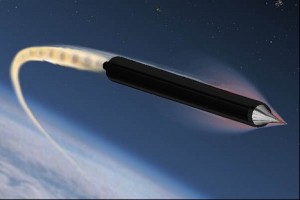 For the past several decades, current Rocket Based Combined Cycle (RBCC) technology has used a configuration that is unfortunately detrimental to system performance because the rocket engine is inside the ramjet air breathing propulsion system’s combustion chamber duct.  This configuration results in increased drag, especially when the rocket is not being used, together with complex mechanisms and structures in the duct, the inability to use the rocket engine to its fullest potential, and difficulties in controlling combustion processes in the combined cycle combustion chamber; these aspects have prevented the RBCC from achieving its full potential for advanced missiles and aircraft.

The new  configuration increases performance by having altitude compensation properties, greatly reduced drag, better packaging, simplification of the internal duct, and elimination of the complex combustion processes with the rocket exhaust and air breathing engine chamber.  By placing the plug nozzle engines external to the air breather, it is now possible to use turbojet engines as well as ram jet engines.

This concept provides the ability to take off from conventional air strips, rapidly accelerate to high speeds, operate at altitudes well above the maximum altitudes of hypersonic vehicles, and throttle back to relatively low speed, fuel-efficient loitering and cruise.  These capabilities enable a wide range of missions with a single propulsion system. It is also notable that the basic concept was conceived by Mr. Entrekin as an undergraduate in the PRC.