In 1957,  ”Eagle Scout Jimmy Blackmon of Charlotte, NC, startled Army Rocket experts when he explained that the nose cone of his six-foot rocket was a five dollar metal lampshade.  Although 17-year old Jimmy’s plans to fire the missile on a farm was balked by CAA rules, the project did win him the American Rocket Society $1,000 Science Youth Award. ” 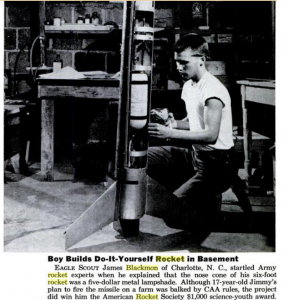 Jimmy Blackmon also met Dr. Von Braun who was inspired by him to promote education for American youth.  “Von Braun couldn’t forget Jimmy Blackmon and as Chairman of the American Rocket Society’s  Membership Committee, he was constantly confronted with the problem of how to help the nation’s youth (1).”

(1) Wernher von Braun: the authoritative and definitive biographical profile of the father of modern space flight