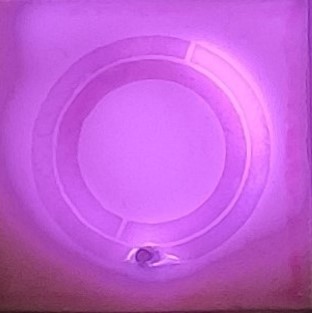 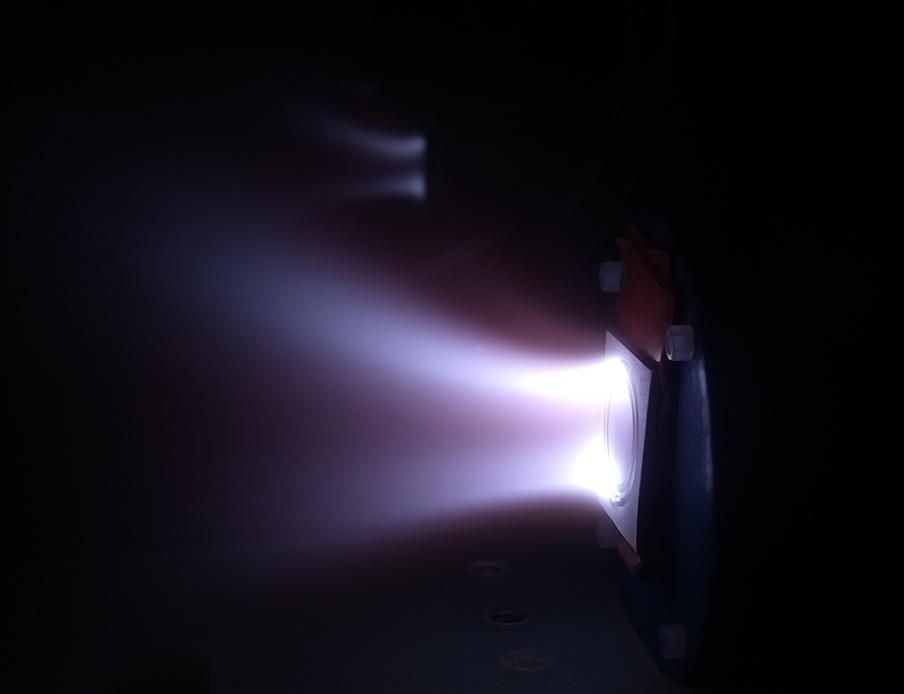 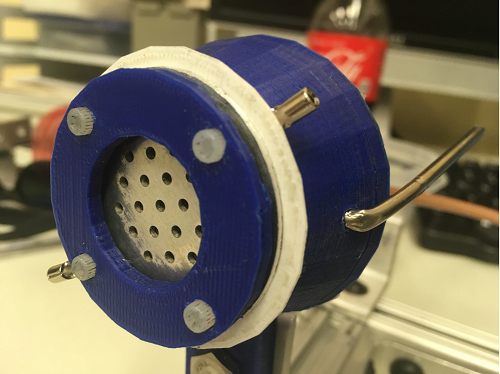 This project seeks to develop a new micro propulsion system for spacecrafts, especially small satellites like Cubesats. The thruster uses a split-ring resonator to generate a microplasma, a method not yet seen in propulsion. The thruster promises low power, low mass, and low cost, all of which make it very attractive for the small satellite market. The research currently looks to understand how the resonator parameters affects the generated microplasma and how that can improve the thrust and specific impulse of a thruster. A 3D printed miniature ion engine with a split-ring resonator plasma source inside was tested. Current effort are aimed at improving the plasma generation by first doing 3D measurements of the plasma. The project is funded by the NSF EPSCoR project. 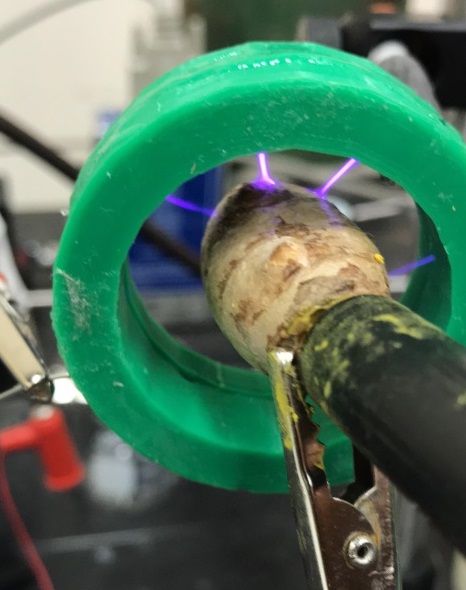 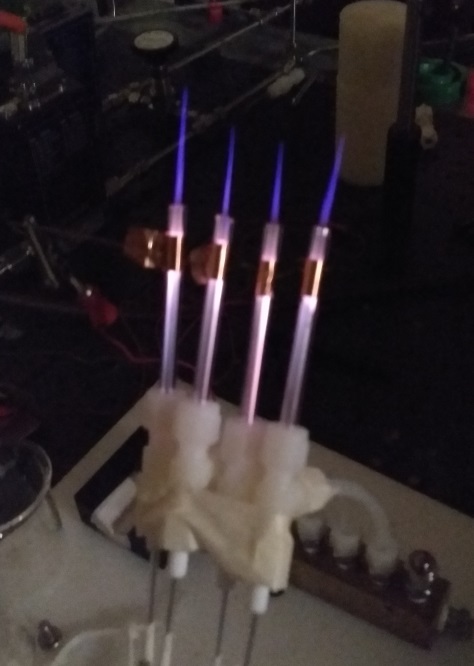 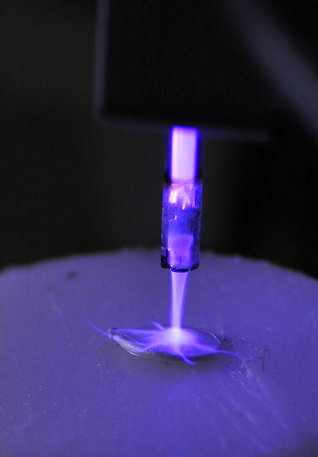 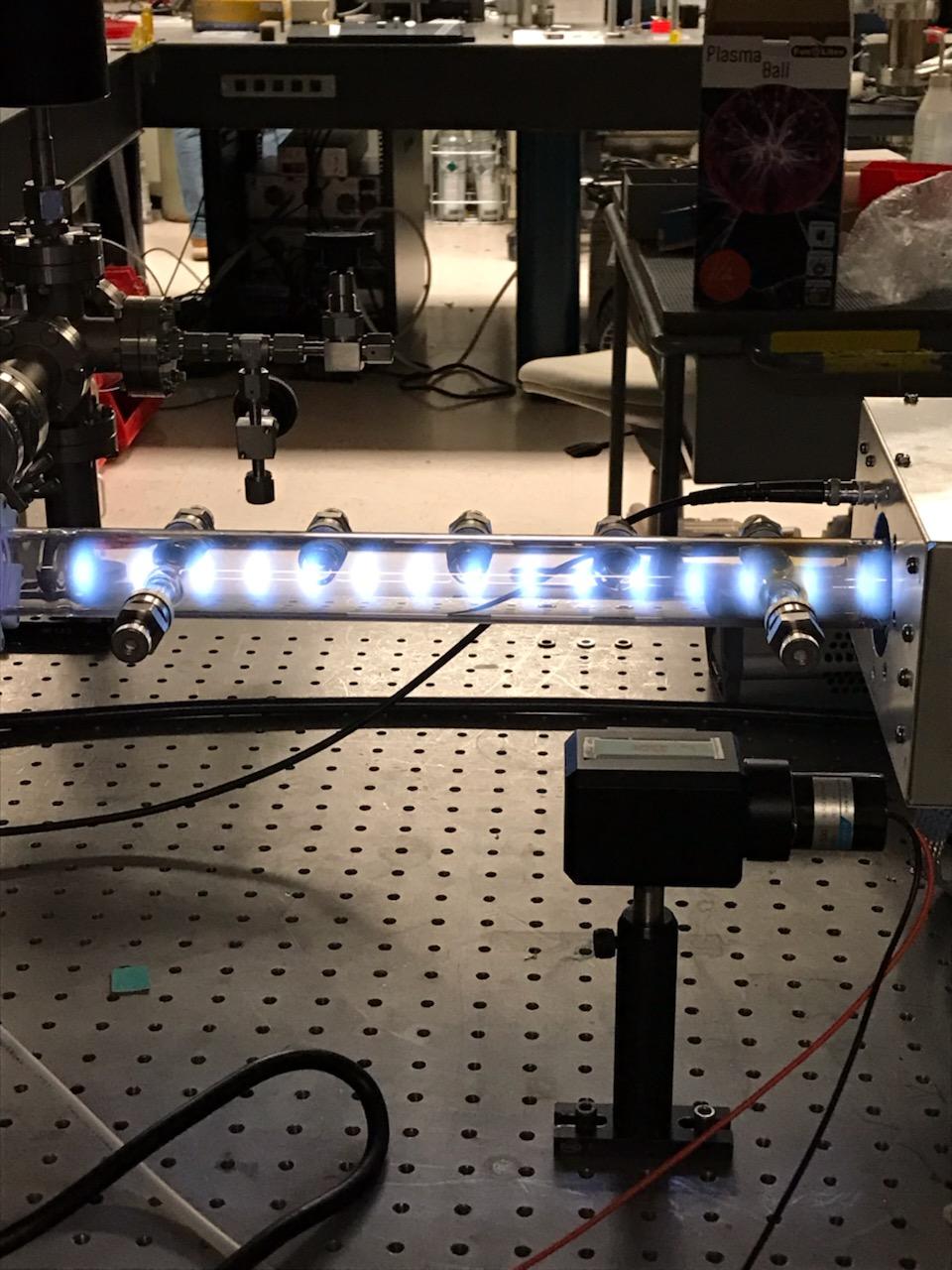 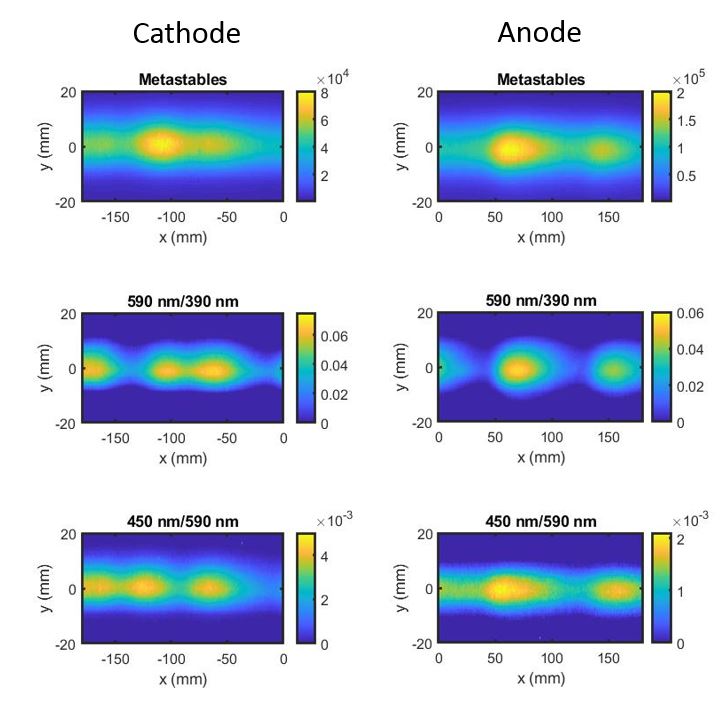 This project studies the formation and behavior of plasma striations in low pressure plasmas. Striations are localized packets of ions and electrons which can move or stand still. We use probe and optical diagnostics to study the formation and propagation of these striations in a dc discharge. This work is part of the NSF EPSCoR program.

This project studies the operation and performance of rotating detonation engines (RDE). A racetrack-style RDE has been tested with propane, methane, hydrogen, and oxygen propellants. The current work looks at injector behavior and wave dynamics. The project is funded by NASA and DoD. 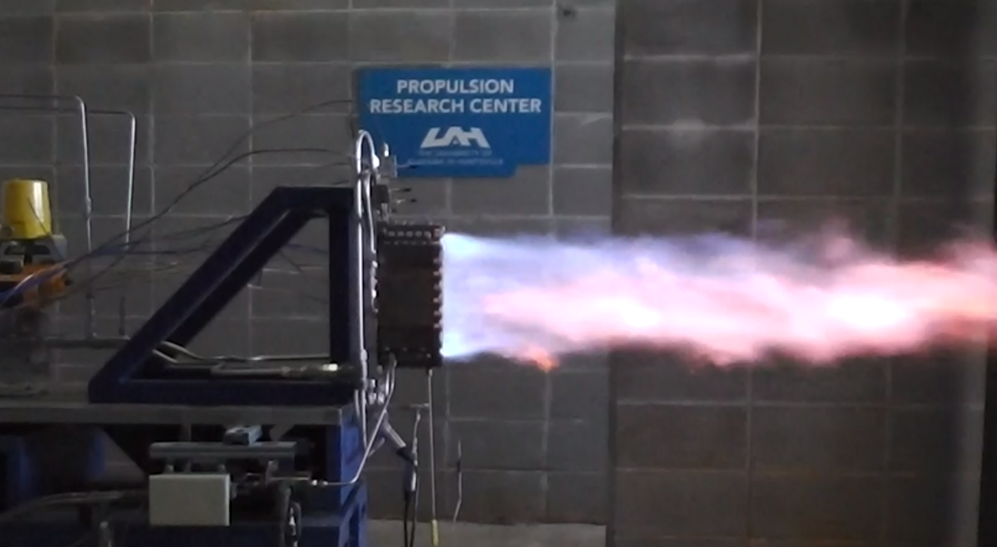 This area covers a couples of different project all focused on studying how strong magnetic fields interact with high-density plasmas. Applications include magnetic nozzles for pulsed fusion propulsion and astrophysical plasma shocks. The work in this area is sponsored by NASA, DOE, and NSF. A recently experiment was conducted to image plasma deflection in steady state magnetic fields. The image above shows a laser plasma expansion in a low pressure argon background with and without magnetic field. The experiment was done at Auburn's MDPX facility.

This project studies the ways plasmas can form coherent structures and patterns naturally. This is a collaboration with Dr. Vladimir Kolobov in CSPAR and a small business, CFDRC. We are doing experiments on plasma spots, plasma-solid interfaces, and plasma-liquid interfaces. The images above show the formation of self-organized patterns from a helium atmospheric pressure plasma jet on a distilled water anode. The project is funded by DOE.

This project is studying how to use the magnetic reconnection phenomenon seen on the Sun for space propulsion. It is supported by the Alabama Space Grant.

This project is part of the statewide NSF EPSCoR project and focus on plasmas generated in water mist for bio applications.

This project studies the effect of collisionality on plasma properties and behavior from low vacuum (~100 mTorr) up to atmospheric pressure. The project is supported by the NSF EPScoR project. 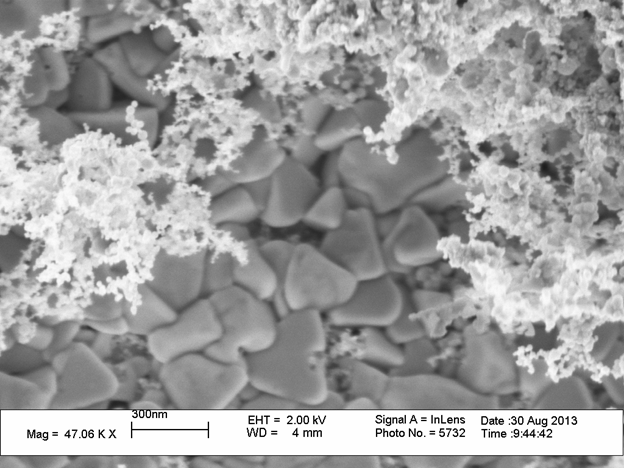 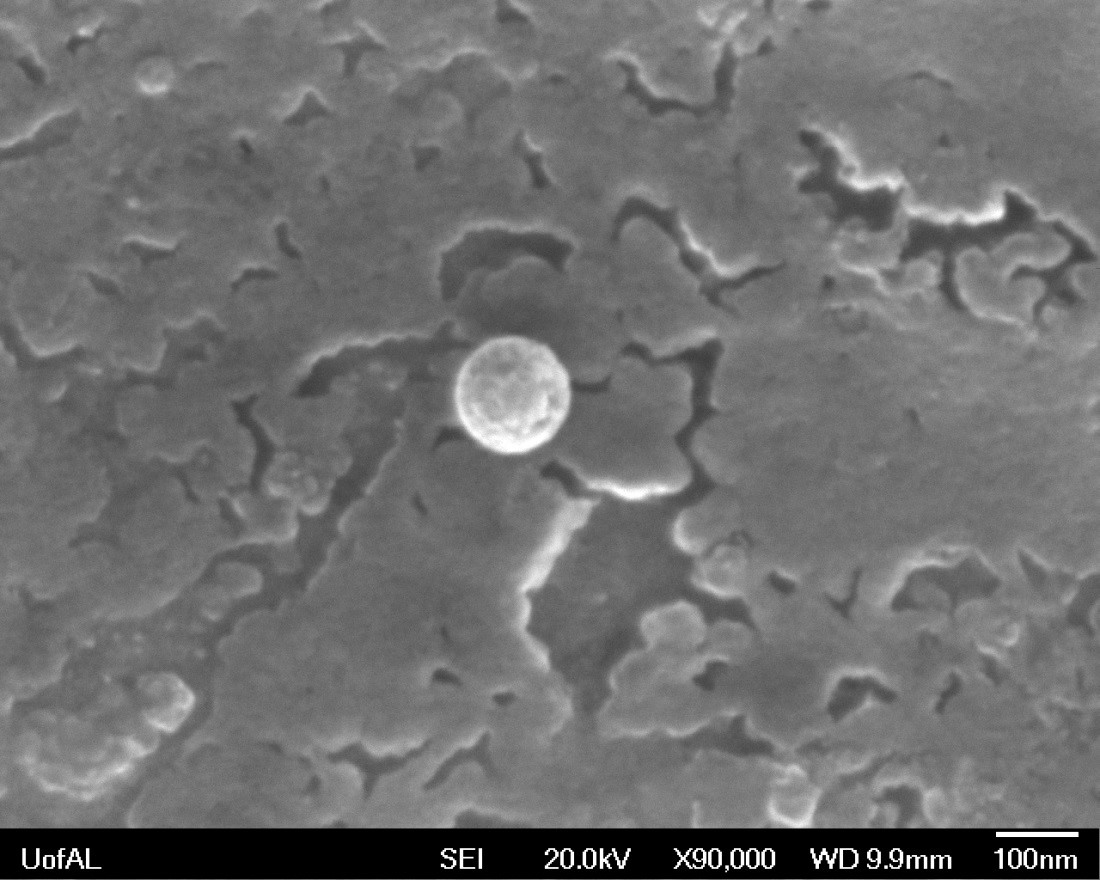 This project seeks to understand the behavior of microplasmas at atmospheric pressures. Due to the greatly increased pressure and thus particle density compared to more conventional vacuum plasmas, some of the basic interactions changes. One example is the plasma is very collisional and gas temperatures can be close to room temperature. One aspect of this research is developing the diagnostic tools to measure the plasma properties which are required to understand the plasma behavior and interactions. Application-wise, we seek to use these microplasmas for the controlled and pre-determined synthesis of nanomaterials over large areas and understand the physics that control the material formation. 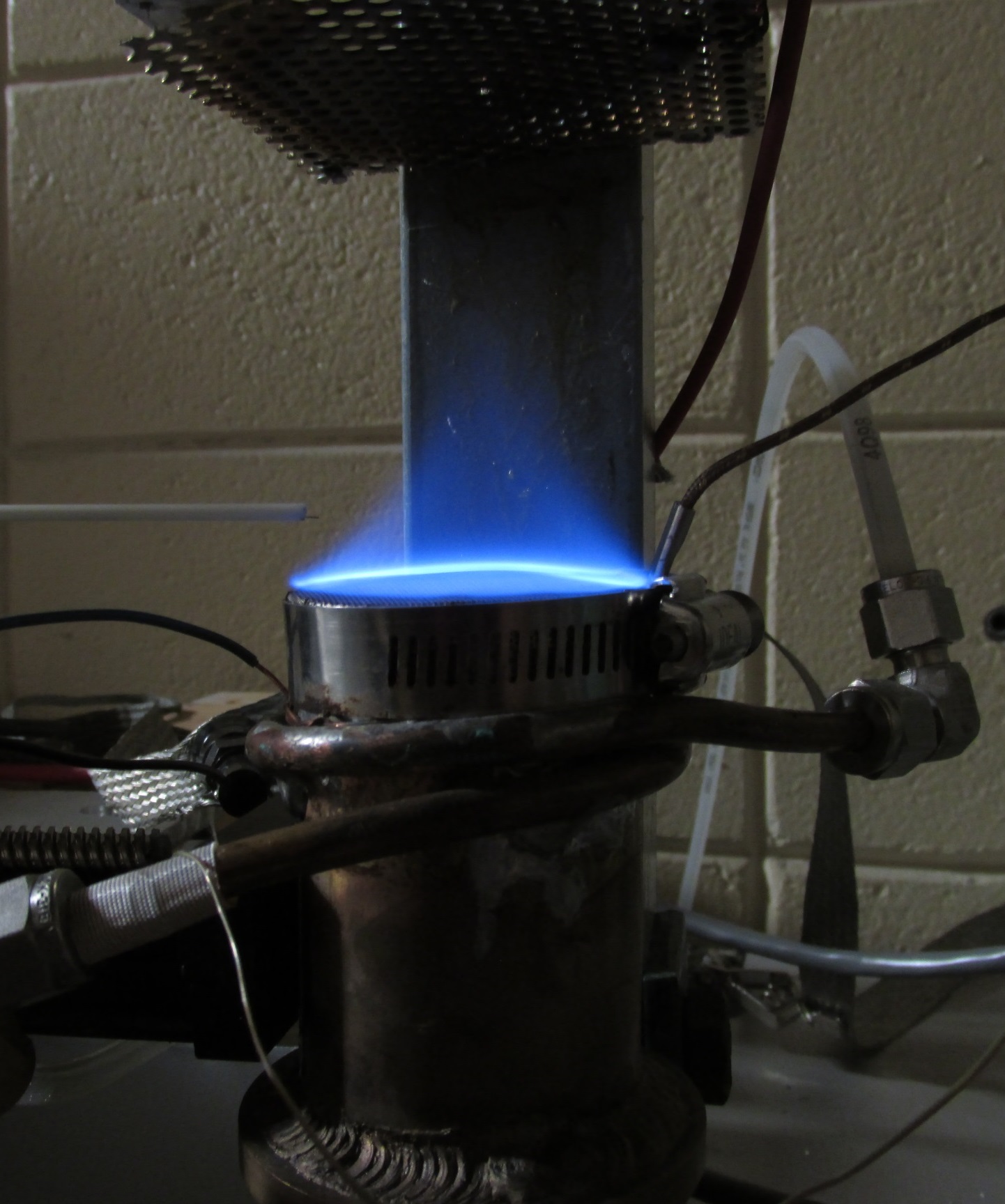 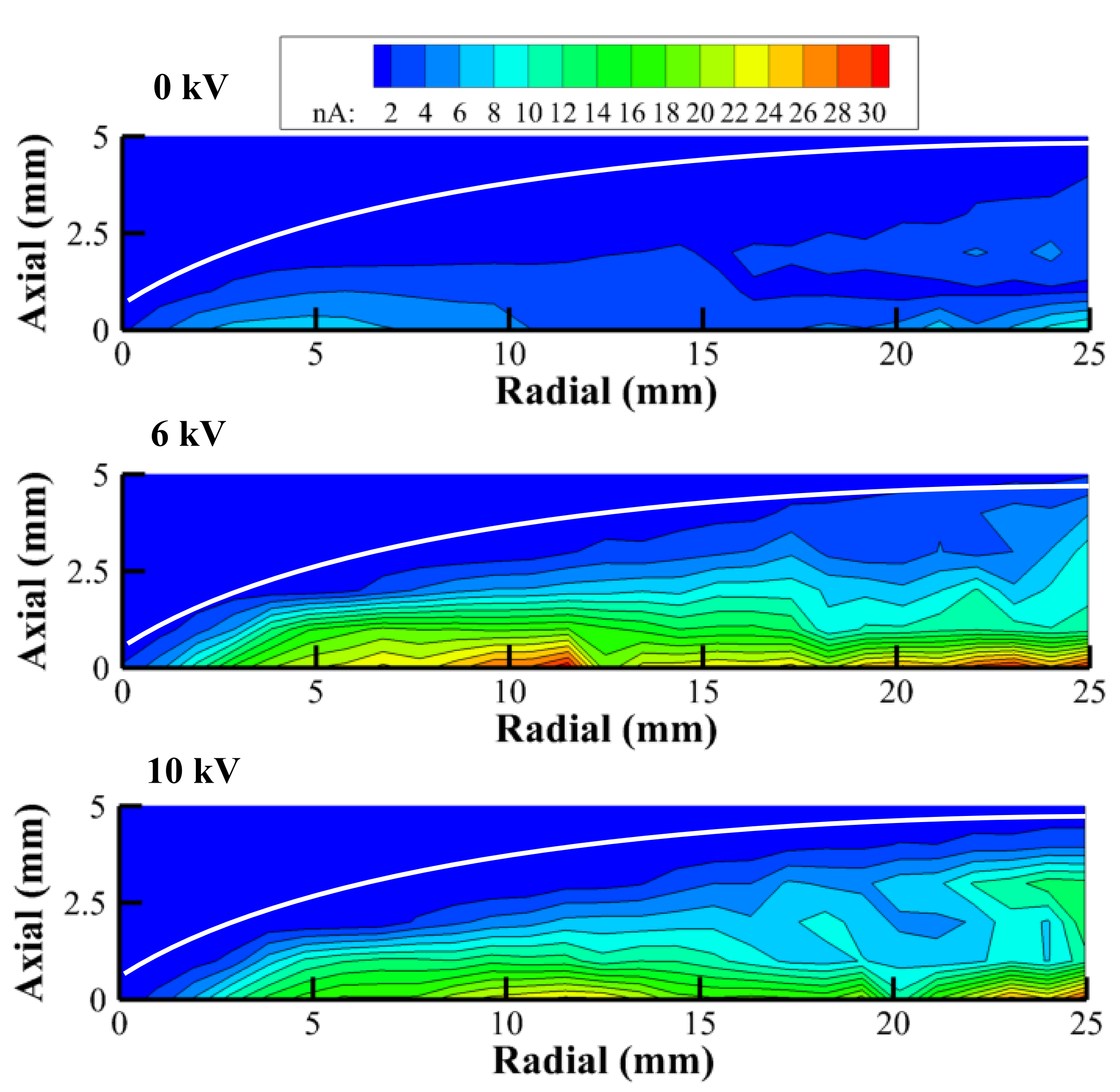 This work is part of the field called Plasma Assisted Combustion (PAC) where plasma and electromagnetic fields are used to modified by the combustion process and the flame behavior. Some of the effects include increase flame speed, increase flame height, reduced turbulence, and ultra lean combustion. This project has evolved from DC fields on a flat flame burner to electric field effects with a pentad rocket injector in a closed combustion can. It is a blend of plasma, combustion, and propulsion. 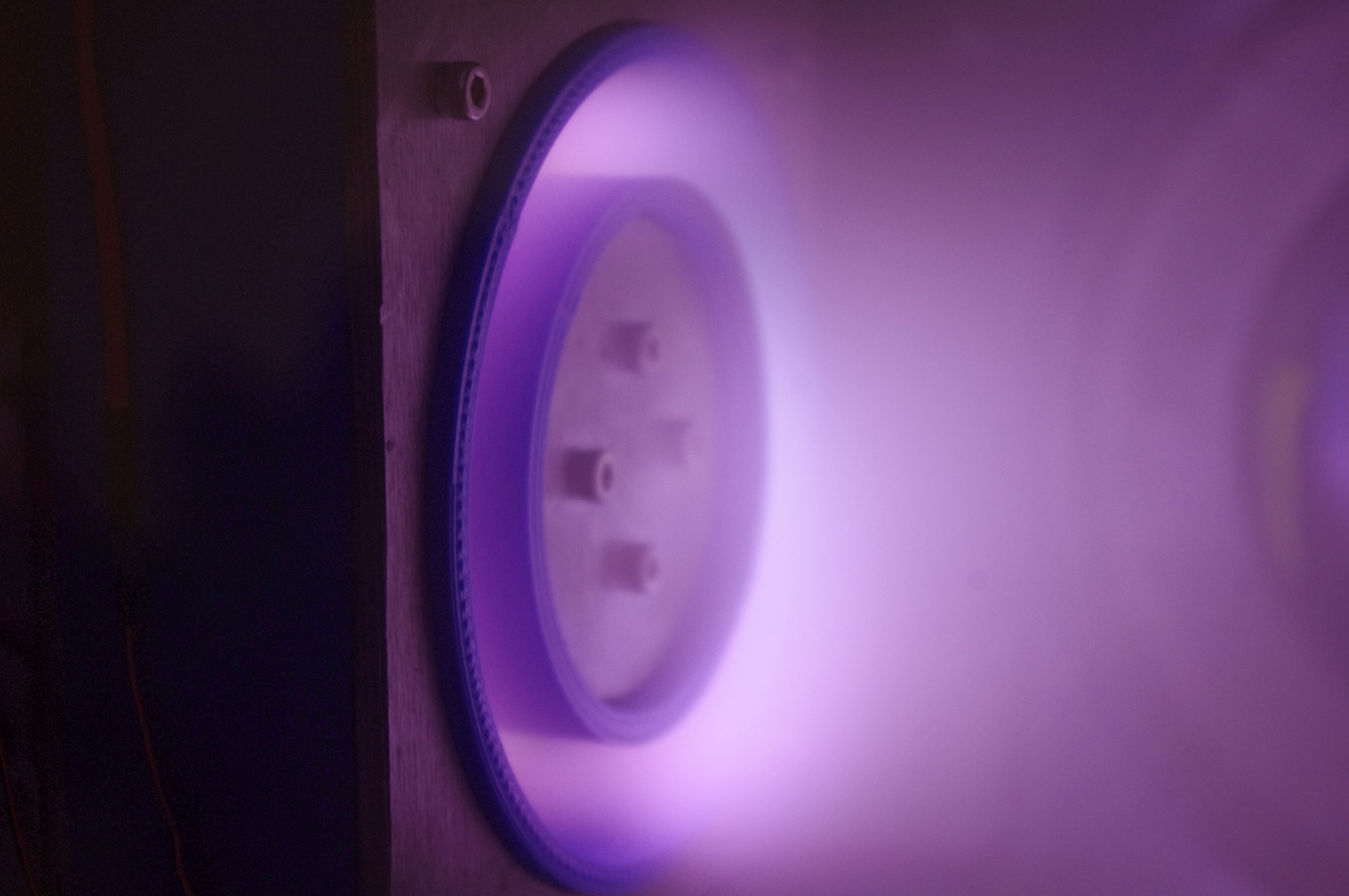 This project seeks to design, built, and test a 3D printed miniature Hall thruster with a CubeSat foot print. The use of 3D printing allows more complex structures to be built, allow propellant and cooling channels to be printed directly into the thruster, and can reduce material and mass with lattice structures. Our initial prototype is build from ABS plastic using a commercial desktop 3D printer at the lab. In total there are 10 major parts of the thruster as the main body, discharge channel, and propellant distributor are build as a single piece, greatly simplifying fabrication and assembly. 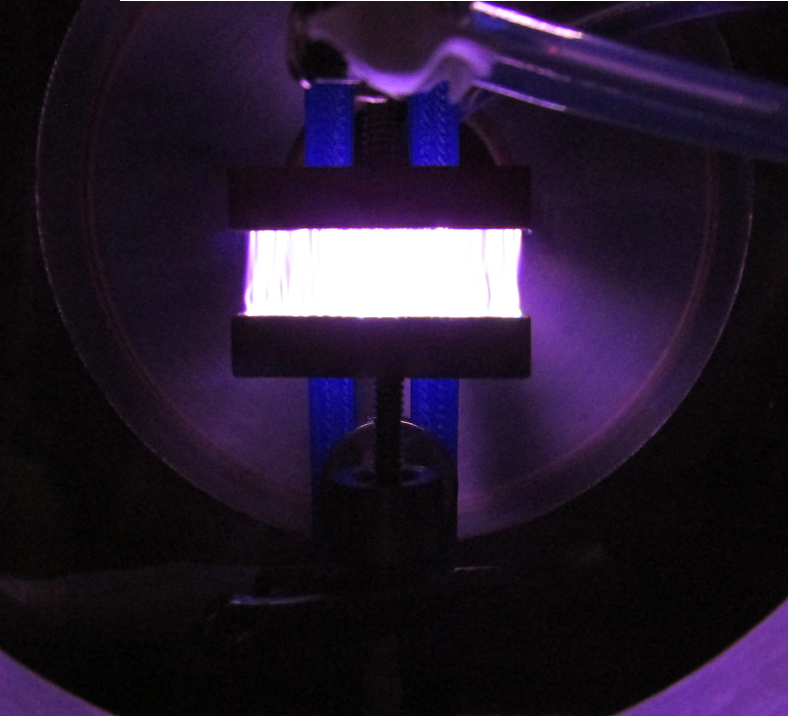 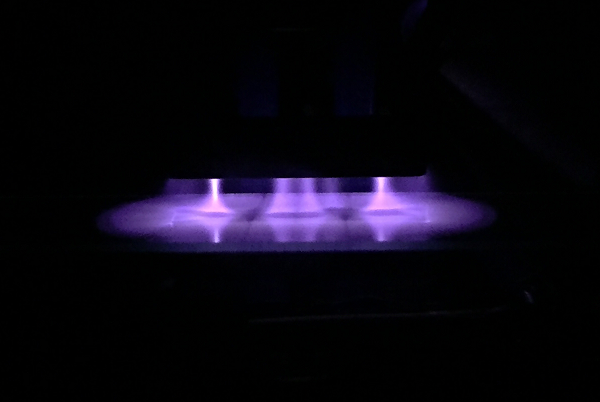 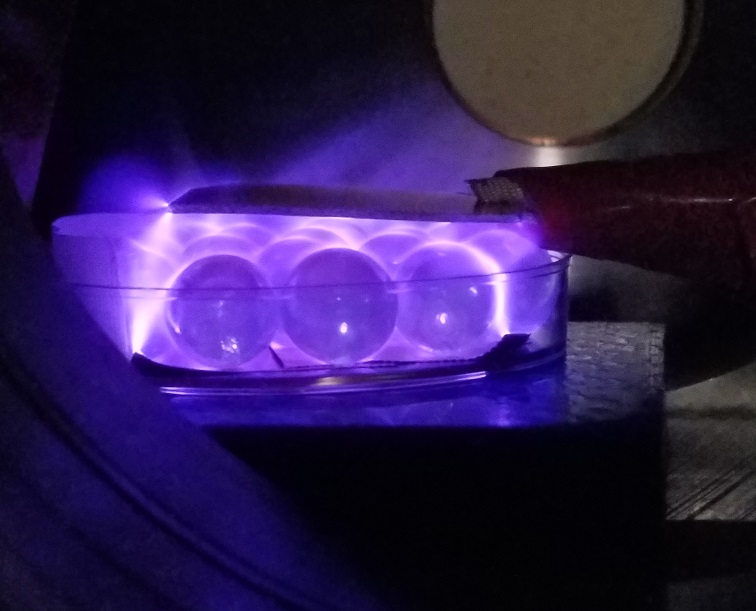 This project is in collaboration with the SMAP Center and funded by the Army SMDC. The project seeks to understand the regime transition and the properties of arc, streamer, glow, and corona in a near atmospheric pressure rare gas discharge. An atmospheric pressure He-Ar plasma can serve as the gain medium for lasers, similar to Ar-ion or HeNe lasers. These new rare gas lasers could provide very high power levels. However, at high pressure, glow plasmas are confined to millimeter or smaller scales, which make it difficult to use as a gain medium. Thus we are studying both the plasma and method to increase the plasma volume.

This is a collaboration with Dr. Jason Cassibry to study regimes of pulsed plasmas for possible breakeven fusion for application to future in-space fusion propulsion. We will be doing optical and spectroscopic diagnostics of the plasma generated by the high current pulsed discharge.