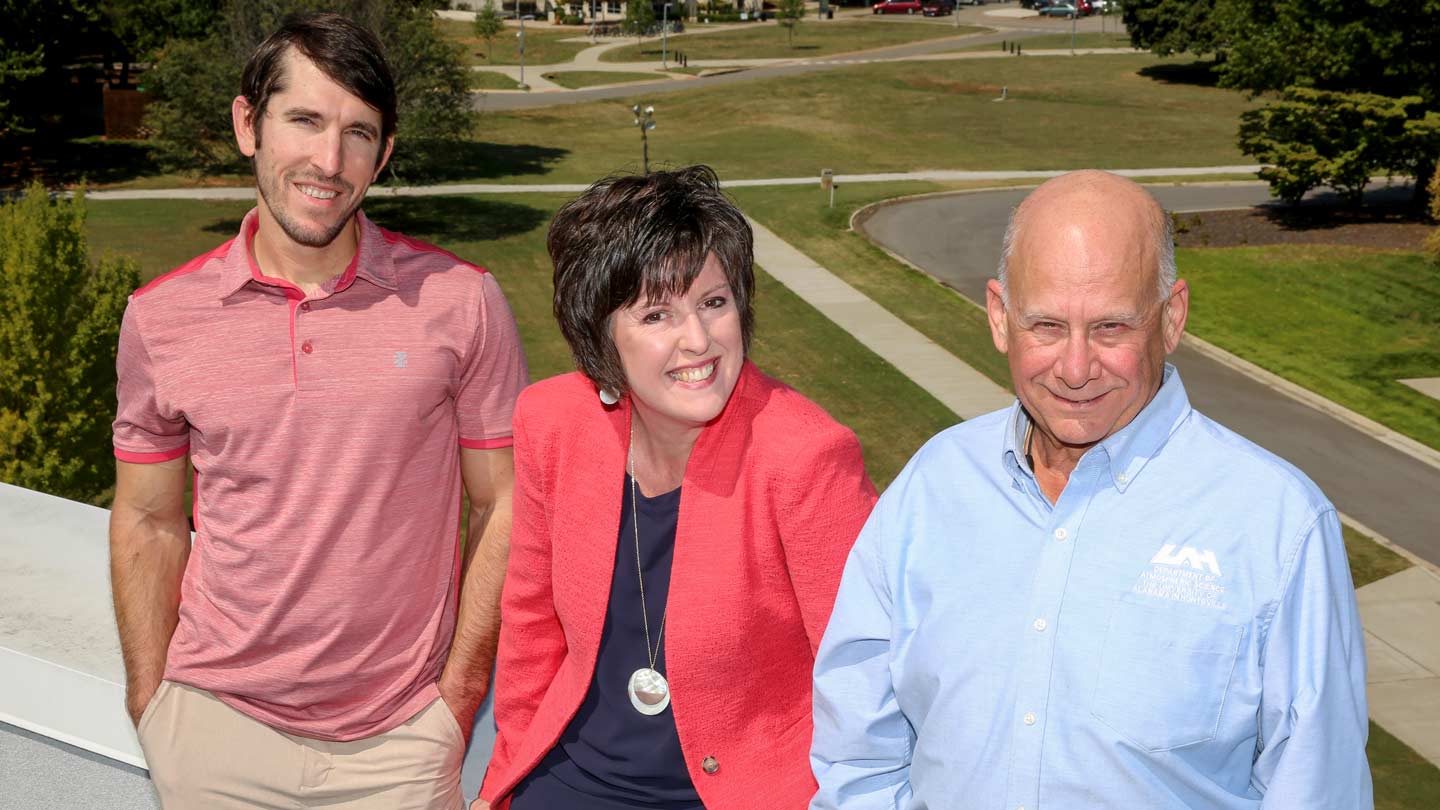 From left, Dr. Aaron Naeger, Dr. Susan Alexander and Dr. Michael Newchurch are collaborating on the conference "New Applications in the Use of Satellite Data Monitoring for Public Health."

On Oct. 10 at The University of Alabama in Huntsville (UAH), researchers who study the effects of atmospheric gases and particulate matter on public health will be preparing to get some new eyes in the sky.

"New Applications in the Use of Satellite Data Monitoring for Public Health," a conference on the application of data from upcoming NASA launches of the Tropospheric Emissions: Monitoring Pollution (TEMPO) and Multi-Angle Imager for Aerosols (MAIA) satellites, is set from 8:30 a.m. to 5 p.m. in Room 103 at the College of Nursing. Registration is required.

The College of Nursing, the Earth System Science Center, the Department of Atmospheric and Earth Sciences, and NASA’s Short-term Prediction Research and Transition Center (SPoRT) program collaborated on the conference with partners Onix and Google Cloud. SPoRT is housed at UAH’s National Space Science Technology Center in Cramer Research Hall.

It’s part of a broader UAH-based role in disseminating NASA data from TEMPO and MAIA to a wide array of researchers everywhere after launch of the instruments.

"Funding of the conference by sources such as NASA and the National Institute of Environmental Health Sciences is evidence of the growing support for using satellite remote sensing data to practical applications, such as addressing clinical questions in healthcare," says Dr. Alexander.

Both TEMPO and MAIA are scheduled to launch as complementary platforms in 2022.

TEMPO will track atmospheric gases, including those known to affect human health, for the first time being able to read ozone levels within the planetary boundary level where people live.

"The increased temporal and geographical measurements that will be unique to the new datasets will help us better assess how variations in gases like ozone and nitric oxides can affect human health," says Dr. Alexander. "Ozone is strongly linked to cardiopulmonary disorders."

"We are inviting the potential users of TEMPO and MAIA to see what the data will look like," says Dr. Michael Newchurch, professor of atmospheric sciences and a member of NASA’s TEMPO Science Team.

Professor Newchurch says an interesting aspect of the MAIA mission is that the Atlanta-Birmingham-Huntsville region has been selected as a primary target for air particulate sampling.

"They will include us among a couple of dozen or so places in the world in which to monitor air-pollution particles," says Dr. Newchurch. Researchers can use the target site data to study regional health impacts.

"Much of the research examining the relationships between health outcomes and air quality has taken place in urban areas," she says, "but TEMPO and MAIA will provide data to support similar work in rural areas."

At the conference, a synthetic form of satellite data will be used to give health researchers a sneak peek at what they can expect to see once the satellites are on orbit, says Dr. Aaron Naeger, a research scientist in UAH’s Earth Systems Science Center and a lead aerosol and air-quality scientist at NASA SPoRT.

The 17-year-old SPoRT program acts as a data translator for the weather, and now, air-quality communities. SPoRT is a research interface that takes in satellite data and puts it into a form that is tailored to meet the specific needs of end users.

"We develop specialized products from satellite data to fully demonstrate the capabilities of the space-based measurements," says Dr. Naeger, who is slated on Oct. 1 to become the deputy program applications lead of the TEMPO mission, the person who will directly interface from Cramer Research Hall with TEMPO data users globally.

The conference’s sneak peek at what data will be available and how it can be used can give researchers a head start on designing their studies in anticipation, he says.

"We’ll take realistic model output data and translate that into what satellite users might see from the space-borne measurements after launch."