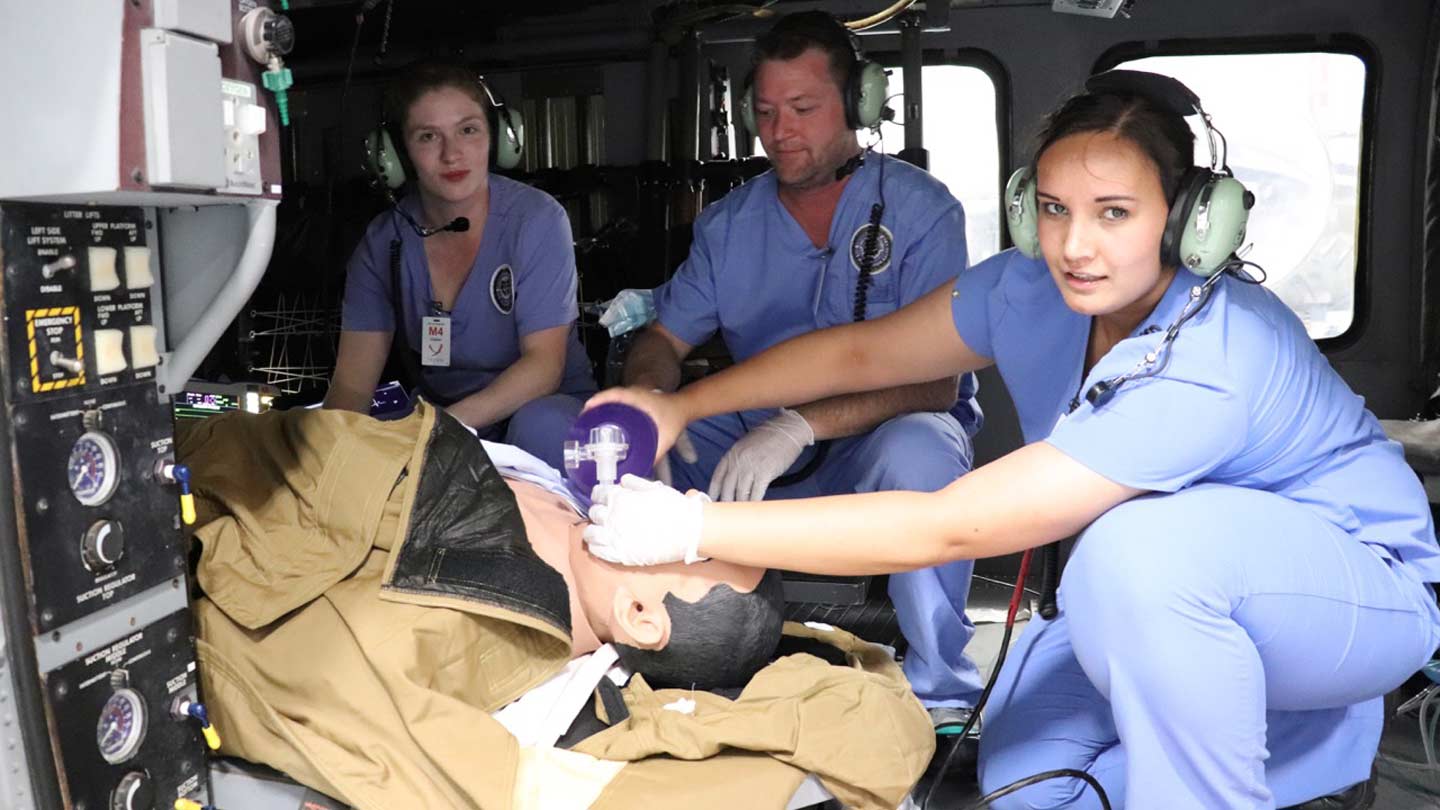 Undergraduate students in Ron Bolen’s critical care transport nursing course learn how to stabilize and care for patients in the air, land, and sea transport environment.

If the idea of trying to save someone’s life isn’t panic-inducing enough, try doing it in mid-air with limited room to maneuver and the whir of helicopter blades drowning out any chance of direct communication. For Ron Bolen (MSN, RN, CCRN, CEN, CFRN), however, it’s all in a day’s work. As a combat veteran, Navy reservist, and long-time critical care transport nurse, he knows what it takes to overcome those challenges and save lives. And now he’s imparting that knowledge to a new generation of nursing students in his undergraduate-level Critical Care Transport Nursing course at The University of Alabama in Huntsville (UAH). "People look at the glory and the excitement, but there’s an element of danger," he says. "We need to show nursing students the different things involved and expose them early on, so they can decide if it’s right for them." 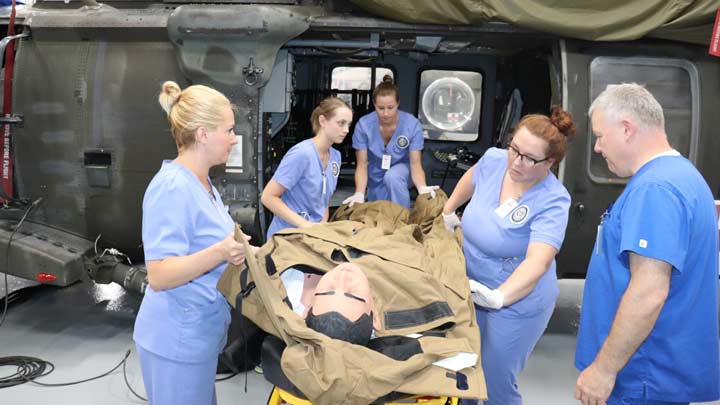 Bolen, who joined the faculty of UAH’s College of Nursing last year, initially proposed the course as three-day review for students taking the critical care nursing board certifications. But at the urging of Dr. Marsha Howell Adams, dean of the College, it was expanded to a five-week summer elective designed to help students build on the concepts of health assessment, pathophysiology, and critical care nursing and apply them in the stabilization and care of patients in the air, land, and sea transport environment. "As a new faculty member, I didn’t think I’d have the opportunity to do it so soon, but the support from the dean and the administration has been phenomenal," he says. "We’re now one of the few universities – if not the only one – to offer a critical care transport nursing course to undergraduate students."

After receiving "a good amount of interest" from the students, Bolen enrolled nine, all of whom had already completed the course prerequisite, medical surgical nursing. "The main focus was to improve their critical-thinking skills," he says. But he also wanted them to learn the tangible skills related to critical care transport nursing, including formulating a plan of care, demonstrating a patient assessment, and safely managing a patient by applying the principles of transport physiology to their pathophysiology. "The idea was for them to explore the implications of altitude and atmospheric changes on the pathophysiology of the critical care patient," says Bolen, "and learn how to mitigate those implications through didactic and patient-simulation labs."

We introduced them to operating in a confined space with stressors.

Each day’s class comprised a mix of lectures and presentations followed by an opportunity for the students to apply and assess their hands-on skills. "We had a simulator set up in the College’s Learning and Technology Resource Center where we introduced them to operating in a confined space with stressors," says Bolen. "I played an audio recording of the aircraft starting up and air traffic control speaking in the background." A few weeks later, they tested those skills in an actual H-60 Black Hawk courtesy of PEO Aviation and defense contractor Yulista Aviation Inc. "We ran through scenarios with the power on in which the students had to communicate through headsets," he says. "It was intense but also confidence building for them. They were like, ‘Ok, this is how it is.’ Now they’ll have that muscle memory and exposure to specific clinical situations."

But while it would be easy for Bolen to take credit for the students’ success as their instructor, he instead points to the strong educational foundation they’ve received as a result of the College’s commitment to concept-based pedagogy. "I knew they’d do well, but the eagerness of these nursing students and their willingness to learn was incredible – they took it to the next level," he says. "For them to be able to take the concepts and apply them to something they’d never been exposed to before was phenomenal, and it wouldn’t have been possible without that concept-based training. It affirmed for me that it’s the right way to teach."

Students put the skills they learned into practice in an actual H-60 Black Hawk, which tested their ability to operate in a confined space with stressors.