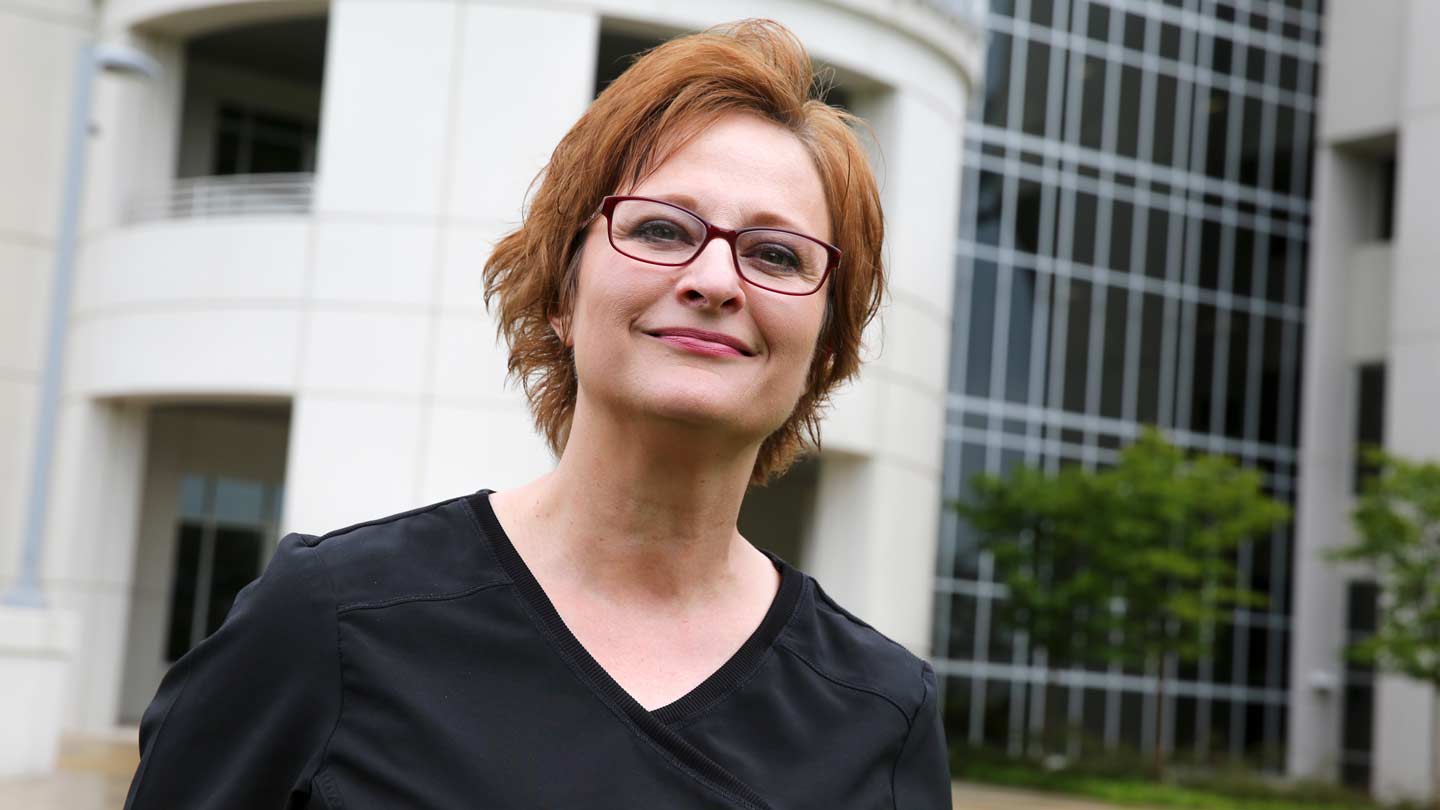 At first glance the words food and insecurity don’t belong in the same sentence together. Researchers coined the phrase food insecurity in the 1990s to bring attention to hunger and the lack of access to food in U.S. households.

Heather Flores, who graduates from The University of Alabama in Huntsville’s (UAH) Doctor of Nursing Practice (DNP) on Sunday, May 6, first learned about food insecurity, or being without access to affordable, nutritious food while researching solutions for childhood obesity.

"One day while waiting for after school pickup, a Huntsville elementary school teacher shared with me and other mothers the problem of food insecurity in our community," said Flores. "We learned how teachers across Alabama, and indeed the U. S. feed many food insecure children from snacks teachers keep in their desks. We also learned about similar programs, such as Blessings in a Backpack that mobilizes people to provide food on weekends for elementary school kids. As a mother I was moved by the concept of food insecurity, and vowed to learn more."

A veteran of the U. S. Air Force Nurse Corps (USAF) Flores spent much of her childhood divided between Southeast Asia (India, Indonesia, and Singapore) and a small ranching community in the heart of Czech-country called Witting, Texas.

Flores earned her BSN with honors from The University of Texas Medical Branch (Galveston, Texas). She served in the USAF Nurse Corps on active duty for six years and decided to attend graduate school. Flores graduated with honors from Abilene Christian University, earning an MSN. She later returned to military service as a USAF IMA Reservist until 2004, receiving The Commendation Medal with Oak Leaf Cluster for meritorious service.

Initially, Flores entered the field of nursing to have secure, flexible employment while paying her way through law school. "I did get accepted to law school, but then realized after having been a nurse for seven years, I really enjoyed nursing…it is part of who I am. Being an idealist I decided nursing was a way I could positively impact the world."

Flores said food insecurity affects the most vulnerable people in our society. "Low-income families, specifically those headed by single women with children. Families and individuals – specifically older Americans, who have been diagnosed with chronic illnesses, and are disabled are also vulnerable to experiencing food insecurity. The other vulnerable groups are members of the LGBT community, college students, immigrants, and our armed forces families are also vulnerable.

"’Nursing’s Food Security Initiative ™,’ was the title of my doctoral project for my DNP degree," said Flores. "I envision it as the grass-roots effort of nurses bridging those in need to community resources. I anticipate it will grow into a nursing movement of nursing intervention, political and social activism, as well as nursing research to find up-stream solutions to the very complex issue that is food insecurity."

"My work with my UAH faculty advisor and mentor, Dr. Azita Amiri, has been absolutely life-changing," said Flores. "I learned how to connect the dots and put into place a project that would explain food insecurity and how nursing is a critical piece of the solution."

"Heather has touched an important issue," said Dr. Azita Amiri, Assistant Professor in the UAH College of Nursing. "Most nurses do not ask their clients if they have enough food to feed their family. I WAS one of those nurses. I was thinking this is a personal issue and I should not be involved or embarrass my client. But, per current evidence and what Heather has found in her DNP project, food insecurity plays an important role in physical and mental health and actually patients want nurses to ask them about it. I believe, food insecurity screening should be included in nursing assessment," Amiri added.

Flores and Amiri approached Huntsville Hospital nursing leadership with the opportunity to address food insecurity in the Huntsville community by initiating food security screening by nurses.

"Nursing leadership at Huntsville Hospital was very receptive to incorporating food security screening, ‘The Hunger Vital Sign™’, into their electronic medical records system this fall," said Flores. "This is very exciting as they are, to my knowledge, now the first large medical entity in Alabama to begin screening for food security and, to my knowledge, the first nursing-led food screening implementation of this size in the Southeastern United States."

There is some good news, Flores said, when it comes to solutions for food insecurity." There are a lot of exciting and innovative programs right now…large cities delivering fresh produce to low income families and individuals based on food prescriptions. ‘Buy one-gift one’ produce programs through community gardens and farmers’ markets. Some healthcare institutions have on-site food pantries, others have SNAP (Supplemental Nutrition Assistance Program) outreach sites," Flores said.

"In the state of Alabama and the North Alabama community specifically, we are seeing college food pantries. "The Summer Feeding Program is expanding, thanks to the works of several Huntsville community agencies. And, seniors can take advantage of market vouchers for fresh and locally grown produce," she added.

Flores, a family nurse practitioner at the Alabama A&M University (AAMU) Health and Counseling Center will continue her research on food insecurity after graduation.

"The AAMU Executive Director of Health and Counseling Services is enthusiastic about addressing food insecurity among college students," said Flores. "I will be an advisor on student lead initiatives that are being developed."