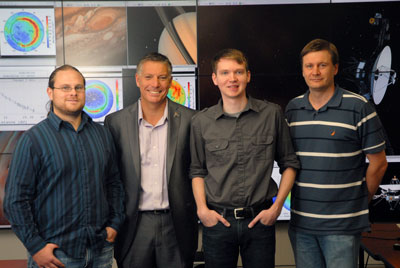 HUNTSVILLE, Ala. (Sept. 24, 2013) - A University of Alabama in Huntsville graduate student and a recent UAH doctoral graduate are exploring surprising data from Voyager 1's crossing of the heliopause into the interstellar medium of our galaxy.

Most surprising to the scientists is why a dramatic shift in the magnetic field that they had modeled and were expecting after the craft left the dominant influence of the Sun's heliosphere did not occur, even though the plasma density surrounding the craft changed as expected.

Eric Zirnstein, University of Alabama in Huntsville physics graduate student and NASA Earth and Space Science Fellow in Heliophysics, and May UAH doctoral graduate Brian Fayock, who now does data analysis for NASA, are comparing data from different sources with models they have created to try to understand what's happening.

Imagine a bubble of gas underwater - the surface between the gas bubble and the water corresponds to the heliopause. The heliopause separates regions of different gases. In the case of the Voyager 1 crossing, the heliopause separates material created by the sun from material that surrounds the stars throughout the galaxy. Because the sun is moving through the interstellar medium, it creates a bow wave as well. Outside the heliosphere, there is a 40-fold increase in plasma density.

Recently, NASA announced that measurements of the effects on Voyager 1 of a March 2012 coronal mass ejection indicated that it had ventured beyond the heliopause, to begin its venture out into interstellar space. At the heliopause, the influence of the solar wind is no longer great enough to push back the gas and plasma created by other stars. When Voyager 1 will be completely beyond the influence of the sun is unknown.

The milestone means the craft has become the first human-made object to venture into interstellar space. It's now about 12 billion miles from the sun, in a transitional region immediately outside the solar bubble. As modeled and expected, the density data from Voyager 1 did show a density change, but apparently the predicted magnetic shift has not happened.

"Scientists expected the magnetic field to change when Voyager crossed that boundary, but it didn't," Dr. Fayock said.

Based on work by Doyle T. Hall in 1992, Dr. Fayock has created a model that describes how light is reflected by neutral hydrogen atoms coming from the interstellar medium and drifting through the heliosphere. Neutral particles from space travel through the electrons and ions in the solar boundary and swap electrons with the plasma inside the boundary to generate another highly energized hydrogen atom called an energetic neutral atom (ENA).

"My work involves helping to constrain the global structure of the heliosphere," he said. "I simulate scattered radiation fluxes."

Based on the flux densities, Dr. Fayock's model maps out the heliosphere and its features, like where the heliopause area is expected to be.

Both Voyager 1 and 2 have ultraviolet spectrometers that have been measuring the Lyman-alpha photons that come directly from the neutral hydrogen atoms. When Voyager data is compared to Dr. Fayock's models, there is a close correlation.

"As the model gets farther from the sun, things start to change based on the location of the heliopause," he said. "If in fact Voyager 1 has crossed already, then our model puts the heliopause a little too far out."

"The impact of the work Brian is doing is significant," said Dr. Gary Zank, heliophysics professor and director of the Center for Space Plasma and Aeronautic Research (CSPAR). "Voyager is still returning ultraviolet backscatter data and there's only one other group in the world - in France ­- who are using it. Brian's work in the U.S. is unique. He has developed the only model in perhaps 15 years that attempts to analyze what data Voyager is returning. Brian's insight is tremendously valuable. He is the only one working on this and modeling it in the U.S."

To better understand UAH graduate student Zirnstein's work, you first need to think of Voyager 1 as more like a mole than a hawk, best at sensing only its immediate surroundings. It's the IBEX satellite that's the hawk, mapping the whole of space from its Earth orbit based on energetic neutral particles that stream in to it from outer space. IBEX data indicate that there exists in space a very narrow ENA ribbon two or three times the brightness of anything else that may help us diagnose the structure of the heliosphere.

"My research definitely depends on where Voyager is and measurements it's taking, if it did cross the heliopause, which the Voyager team released recently," said Zirnstein, whose advisor is Dr. Jacob Heerikhuisen, assistant professor of physics and assistant director of CSPAR.

"If it did," Zirnstein said, "then we did expect that the magnetic field would change direction, because according to our simulations, in order for us to simulate the IBEX ribbon, we have had to assume a quite specific direction and strength of the magnetic field."

"So that's one thing that we're actually going to try to figure out, why for some reason our ribbon simulation predicts a certain magnetic field direction. We expected the magnetic field would change in direction significantly, but all of the other measurements that Voyager made indicated that it did cross the heliopause, except the magnetic field didn't change very much," Zirnstein said. "Is it going to change later? But the fact that the density did change so dramatically, that definitely is an indication that it did cross the heliopause."

Zirnstein's work sheds a great deal of light on the IBEX measurements, said Dr. Zank. "Tying together the IBEX global view with the extremely microscopic view of Voyager is very important. What is the magnetic field doing? Why did it not change direction, as we expected? Eric has the most sophisticated model to address energetic neutral atoms and the ability to use them to probe the physics of the very local interstellar medium and its magnetic field."

Both scientists are keen for Voyager 2 to perhaps shed more light on the magnetic field conundrum when it arrives at the heliopause. Unlike Voyager 1, its plasma measurement instrument is still working.

Truthfully, by now the Voyager 1 spacecraft should be just another burnt out retiree, it's primary work done as of Nov. 20, 1980, floating away out in space somewhere.

But Voyager refuses to go quietly into that dark night. With most of its sensors still working, it utilizes computer power that's dwarfed by today's smartphones to send sometimes surprising data packets back to Earth ­- first recording them on its ancient 8-track digital tape machines before assembling them and blasting them out at a staggering 23 watts for a trip that NASA says now begins in interstellar space.

Thing is, almost nobody on Earth is learning from the old codger, launched Sept. 5, 1977, during the "Saturday Night Fever" disco dancing era primarily to study the planets. For example, NASA's Dr. Fayock says funding is drying up for his Voyager work, and he is holding on to the hope that an upcoming UAH graduate student may see value in continuing it. Yet news from the geezer satellite keeps intriguing scientists. NASA expects it to send data through at least 2020, and its ability to power itself could last until 2025.

Taking a momentary break during a hectic day, CSPAR Director Dr. Zank indulges a visitor to his office by setting aside mounds of calculation-laden journal proofs he's reading and speaking about the impact of Voyager 1's amazing journey.

He paints a picture of a spacecraft constructed entirely of materials made by the sun, even put together by people made of stuff made by the sun. It's a package totally of solar origin that scientists with a great degree of certainty say has shed itself of its creator and now exists in a place where almost nothing around it is of solar creation or influence.

As the first human-made craft to achieve such a feat, it's an emissary that travels with its Golden Record - literally a gold phonograph record containing a wide assortment of information about Earth including a stylus and cartridge to play it - in an area where there's almost nothing that can harm it.

"So when the sun burns out a few billion years from now and Earth ceases to exist and humans are extinct, this craft could still be out there in orbit," Dr. Zank said, "where it will exist for billions more years."

He thinks it's important we learn from it as long as we can.