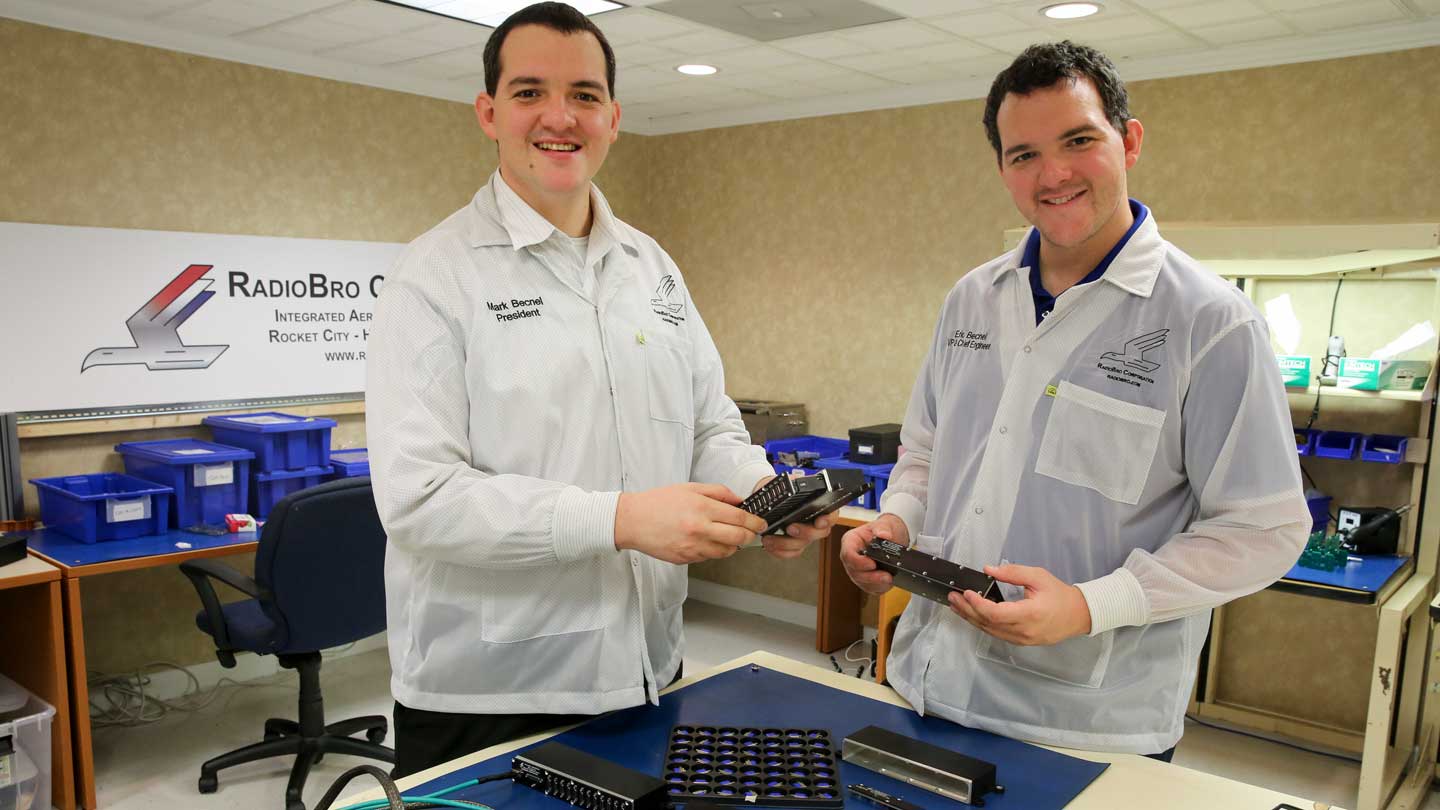 RadioBro Corp., a space and aviation technology startup created by UAH alumni and twin brothers Mark and Eric Becnel, is one of the first tenants of the I2C's proof-of-concept facility located in Executive Plaza.

Construction began in late 2017 on the facility that will house the Dorothy S. Davidson Invention to Innovation Center (I²C), which will serve as a regional resource offering leadership and support to entrepreneurs looking to collaborate and build companies. It is scheduled to open in early 2019, but that hasn’t prevented some of its future occupants from getting a jump start on the initiatives they plan to bring to the center. Across Sparkman Drive, in Suite 1040 of Executive Plaza, a property recently purchased by The University of Alabama in Huntsville (UAH), a small group of companies have taken up temporary residence in a newly established proof of concept (POC) facility, headed by I²C director Rigved Joshi.

"One of the reasons we’re in Executive Plaza right now is because we want to change the culture of how new and existing tech and engineering companies operate in Huntsville," explains Mark Becnel, president of RadioBro Corp., a space and aviation technology startup, and the POC facility’s first tenant. "We want to help other businesses impact the market in new ways and avoid the ‘this is how we’ve always done it’ mentality."

We want to change the business culture.

Becnel, who started RadioBro in 2014 with his twin brother, Eric, knows what he’s talking about. Both brothers completed their master’s degrees in aerospace engineering at UAH in 2013, where the experience they gained in team building and working in a collaborative environment gave them an advantage when they set out to establish RadioBro. Two years later, the young company had already surpassed many of the hurdles startups typically face, but they were having trouble building a sustainable support network.

"We were trying to work with other people and bring in new ideas and solve problems and partner with businesses, but we were having a lot of traction issues," Becnel recalls. "Whether it was meeting other people, seeking mentorship or training in a certain way – just the guidance and exposure and opportunities that come from someone who’s done it before. It’s hard to find when, for example, you’re by yourself in a coffee shop trying to start a business."

RadioBro spent four years moving between offices but were disappointed by their options. "It was frustrating," Becnel recalls. "We’d visit a facility and think, ‘I see how you make use of this space,’ but it was never the other way around, like, ‘Oh, I see how this space enables you!’ And then the I²C popped up on our radar." Finally they could bypass the barriers that leasing a space presented and focus their efforts exclusively on creating new products and collaborating with other companies. Completion of the I2C facility is set for early 2019.

When UAH purchased Executive Plaza and set aside a suite to serve as an interim incubator under the I²C initiative, RadioBro, eager to have access to office and lab space, jumped at the chance to set up shop. "We think it’s awesome," says Becnel. "It’s a great springboard for the I²C." In mid-February, Becnel got his keys to the facility and within days the other tenants – Redstone Aviation, Invictus Aerospace Group, and ACE Creative Engagement – started moving in. A week later, the building was filled to capacity. "We’re already looking into expanding," says Becnel, who sees this demand as an indication of the much-needed resource the I²C will be. "That vision of invention to innovation is already happening. It was happening in our company, and it’s happening here in the POC facility."

As they settle into their new surroundings, the tenants, with their mix of military, government, and commercial backgrounds, are learning how to work with each other and with the university. The I²C director couldn’t be happier with the progress he’s seeing take root at the POC facility. "This is a perfect opportunity to get started on our incubation initiatives," says Joshi. "RadioBro, along with their partners, are looking to the I²C to provide them with the right entrepreneurial resources to expand their businesses, and the POC facility fills an immediate need for space as well as access to UAH’s vast network of support and services."

Becnel also sees this as a mutually beneficial situation. "Starting to work together now means that on day one in the new building we expect that we’ll have gotten past a lot of snags," he says. "We couldn’t do that without the POC facility." Looking ahead, he sees nothing but opportunity. "We want to figure out what other initiatives we can stimulate that could help businesses grow. We want to find highly motivated people who are looking to engage through investing or mentorship. We want to change the business culture."