Launched by brothers at UAH, RadioBro ships its first product 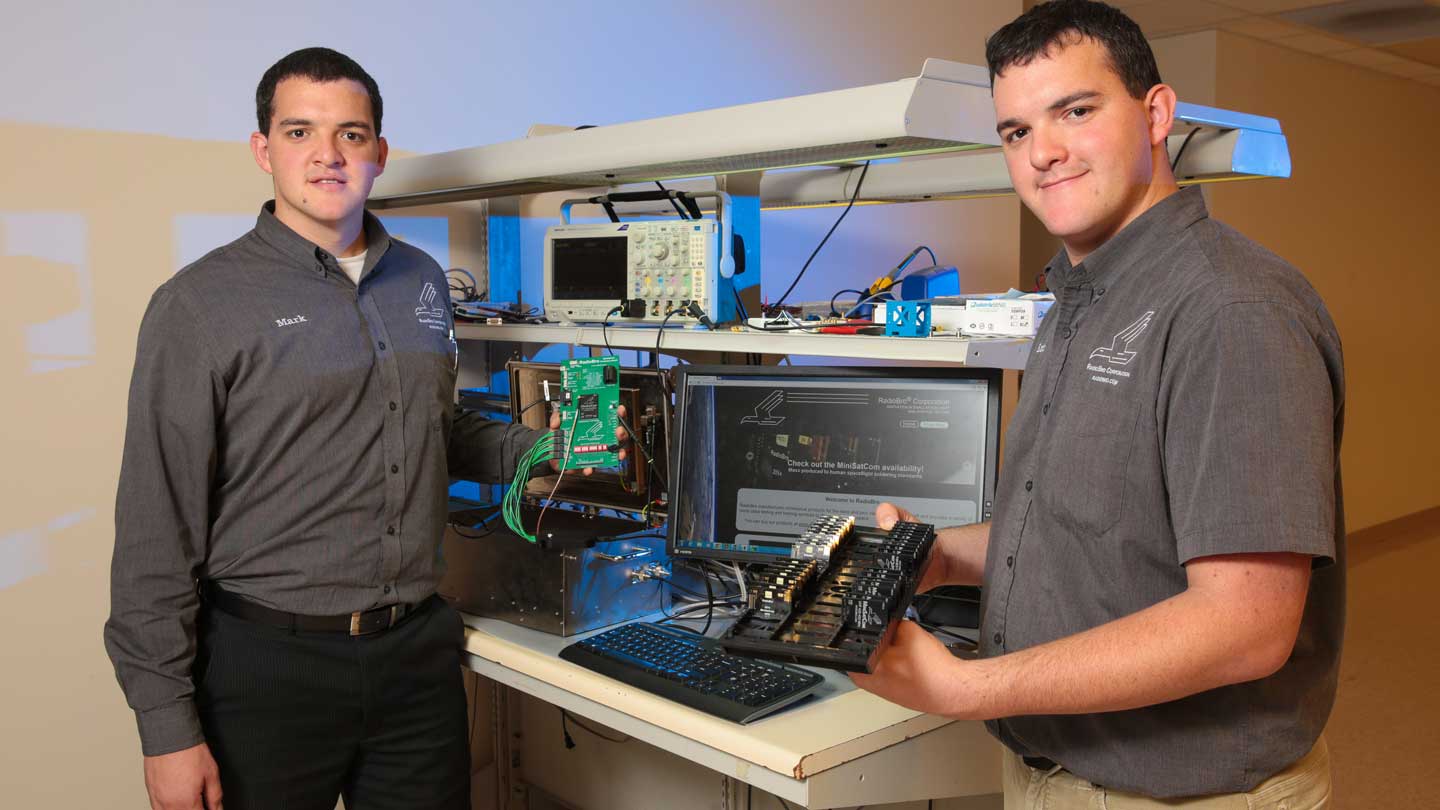 RadioBro President Mark Becnel, left, with a MiniSatCom mounted on a green board and Vice President and Chief Engineer Eric Becnel with a tray of MiniSatComs.

A year-old space and aviation technology startup launched in Madison by twin brothers while graduate students at The University of Alabama in Huntsville (UAH) has shipped its first product and is on trajectory to roll out additional innovations.

RadioBro, the company founded by Mark and Eric Becnel, reached its first product milestone with a mini-satellite communications transceiver.

"We prototyped it in June and did a production run," says Mark Becnel, company president, who is also finishing up his aerospace engineering master's degree at UAH. His brother, Eric, who is RadioBro vice president and chief engineer, graduated in 2013.

We are working on a new product and UAH was in a position to work with us on the Launchpad process.

"We accomplished some pre-sales and then did a full run of 100 units," Becnel says. The MiniSatCom is offered in a variety of kits. The company's manufacturing partner is STI Electronics in Madison. "Now that we have it in-stock and an availability of units, we can focus on retail sales. Our talents can now turn to our next product."

Next up is a cube satellite core that is being entered in partnership with the UAH Office of Technology Commercialization (OTC) in the coming Alabama Launchpad competition. Launchpad is a program of the Economic Development Partnership of Alabama Foundation and its seven Alabama research university partners to promote and reward high-growth, innovative start-ups from across the state.

"We don't have a formal product name for it yet," Becnel says. "It's the brain of a small spacecraft."

Using the RadioBro core will save cubesat developers the six months to two years of development time that's normally required to make a disparate stack of various products work together to serve the same function, Becnel says. If the cubesat is built to generally accepted standards, the core will be plug and play, he says.

The firm's current cubesat trajectory is to become a low-cost supplier of comprehensive solutions to companies that develop and manufacture the tiny spacecraft.

"The cubesat core is a pretty good jump toward that direction," Becnel says.

"We knew about Launchpad when we formed the business a year ago, but we missed that cycle," Becnel says. "This year, it was timely. We are working on a new product and UAH was in a position to work with us on the Launchpad process."

I think RadioBro is doing exactly the right things to stand themselves up as a business," says Kannan Grant, OTC director. "They have shown a lot of passion for what they do and it shows in the fact that they have already started making sales. As a startup, this is really good."

The university is serving as a crucial support system for the brothers as they turn their dream into an economic reality, Grant says.

"First of all the Becnel brothers saw UAH as the best place to get their education. Two very bright and talented individuals getting their education at UAH speaks volumes about UAH," Grant says. "We also provided them with a platform, the Space Hardware Club, to help spur their passion for all things related to space.

"We also played a role, through OTC, in helping them hone their business plan for the Alabama Launchpad competition," Grant says. "In the process it forced them to take a very careful look at their business strategy, their product mix and offerings, their clients, finances and everything else that is needed for success. And it gave us a better understanding of the satellite industry."

Also in the product pipeline at RadioBro is an aircraft data logging system that is being developed while supporting test pilots.

"We have an initial system on board an aircraft that is being used by test pilots," Becnel says. "This product will support aircraft data logging to gather the necessary information for experimental aviation needs."

RadioBro maintains strong connections with UAH and with the university's Space Hardware Club for the engineering talent it will need as it grows.

"Our plan is to leverage the talents of the innovative young engineers, because they're the ones who come up with the innovative answers," Becnel says. "We're in a position now, having released our first product, where we are about to grow and we will have need for more talent in engineering, development and marketing."