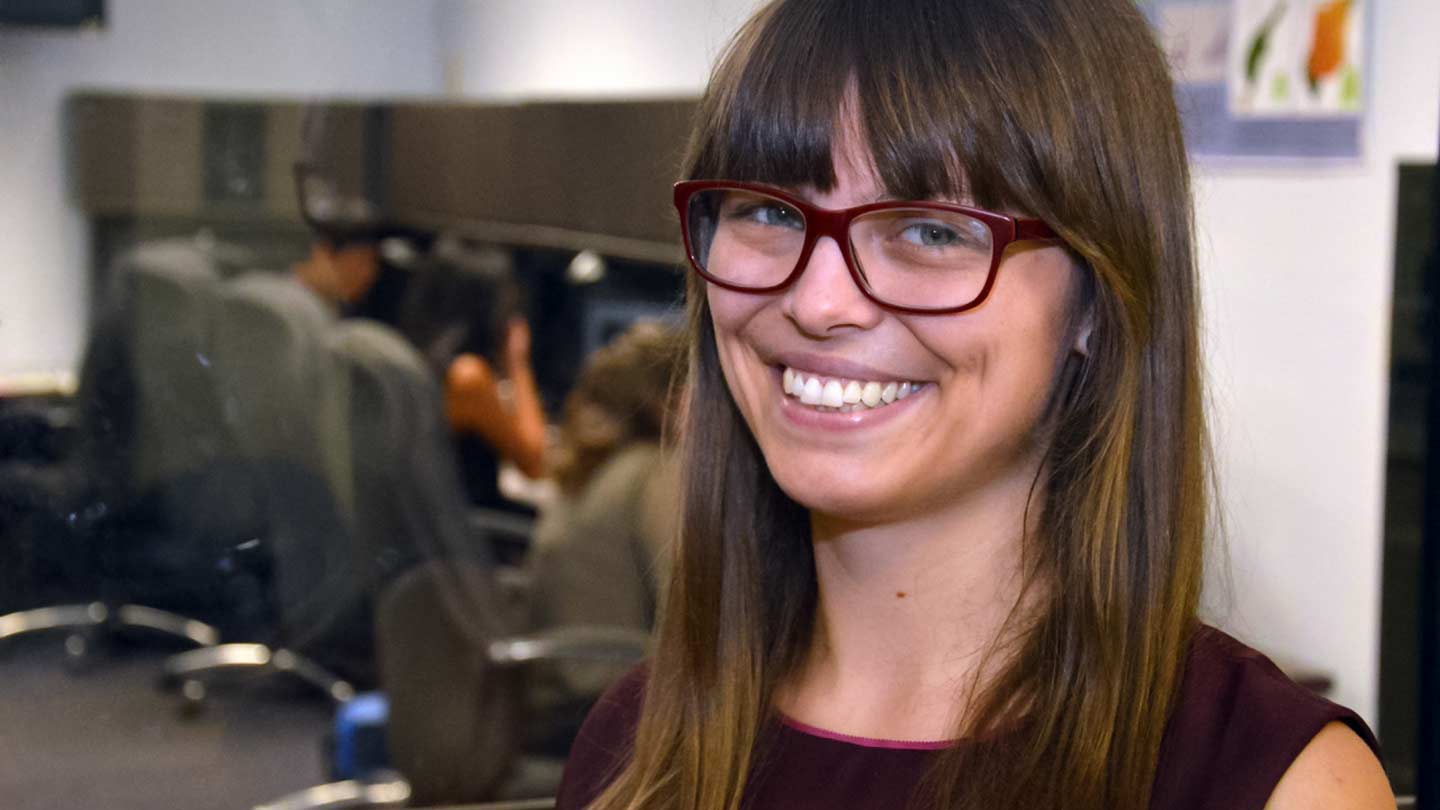 After two years of teaching English to children in Japan, Helen Baldwin-Zook decided to come home to the U.S. and study Earth system science at UAH.

Can an astronaut in space look down at a spot on the Earth and tell if the people living there are wealthy or poor?

She might, if she looked at the nighttime side of the planet.

At least that's the theory being tested by student scientists in NASA's DEVELOP lab in Cramer Hall at The University of Alabama in Huntsville (UAH).

"The idea is, people will have lights and lighted roads and things like that as personal wealth increases," explained Helen Baldwin-Zook, a junior majoring in Earth system science (ESS) at UAH. This summer she was a co-lead on a project using satellite images of Thailand at night to test whether it is possible to use lights at night as a proxy for poverty.

"We're testing whether this is an accurate result and a good approximation of reality on the ground," she says. "We have discovered that industrial areas tend to be brighter than nearby agricultural areas, which can be misleading.

"People can live near those bright areas, where there is industry, etc., without benefiting economically."

They also found the province-level poverty data the team received didn't have the detail they need. "We need to use more detailed data at the local level," Baldwin-Zook says.

The shortage of on-the-ground data about the country's growing poverty was one of the reasons the Thai government approached DEVELOP seeking help, said Dr. Robert Griffin, an assistant professor in UAH's Atmospheric Science Department and a science advisor to the Huntsville DEVELOP lab.

"This project was driven by the needs of the Thai government," Griffin says. "The province-level poverty data came from them, and we had to combine that with these new satellite sensing capabilities."

"The students drove the project forward from there," Griffin says. The project involved four students: two from UAH and two from Thailand.

Summer was Baldwin-Zook's second semester as a DEVELOP intern. During the spring, as a sophomore, she worked on a project studying flooding in the Mississippi River basin.

"We identified flood water using satellite images, then tried to I.D. infrastructure affected by those flood waters," she said.

"We're really pushing students to get involved in research projects earlier in their time at UAH," Griffin says. "We're even recruiting them as freshmen, letting them get their foot in the door doing some cool applied sciences research with NASA."

A Philadelphia native, Baldwin-Zook spent two years teaching English to children in Japan before deciding to return home to the U.S.

"It was super interesting and I loved all the kids," she says. "I taught at five schools, from kindergarten to eighth grade, so I was teaching children ages four to 14."

While she was in Japan she learned about the concept of food security.

"Japan imports 60 percent of the calories it consumes, so food security is an important issue there," she says. "I decided I wanted to come back to the states, where I can work in food security and recycling."