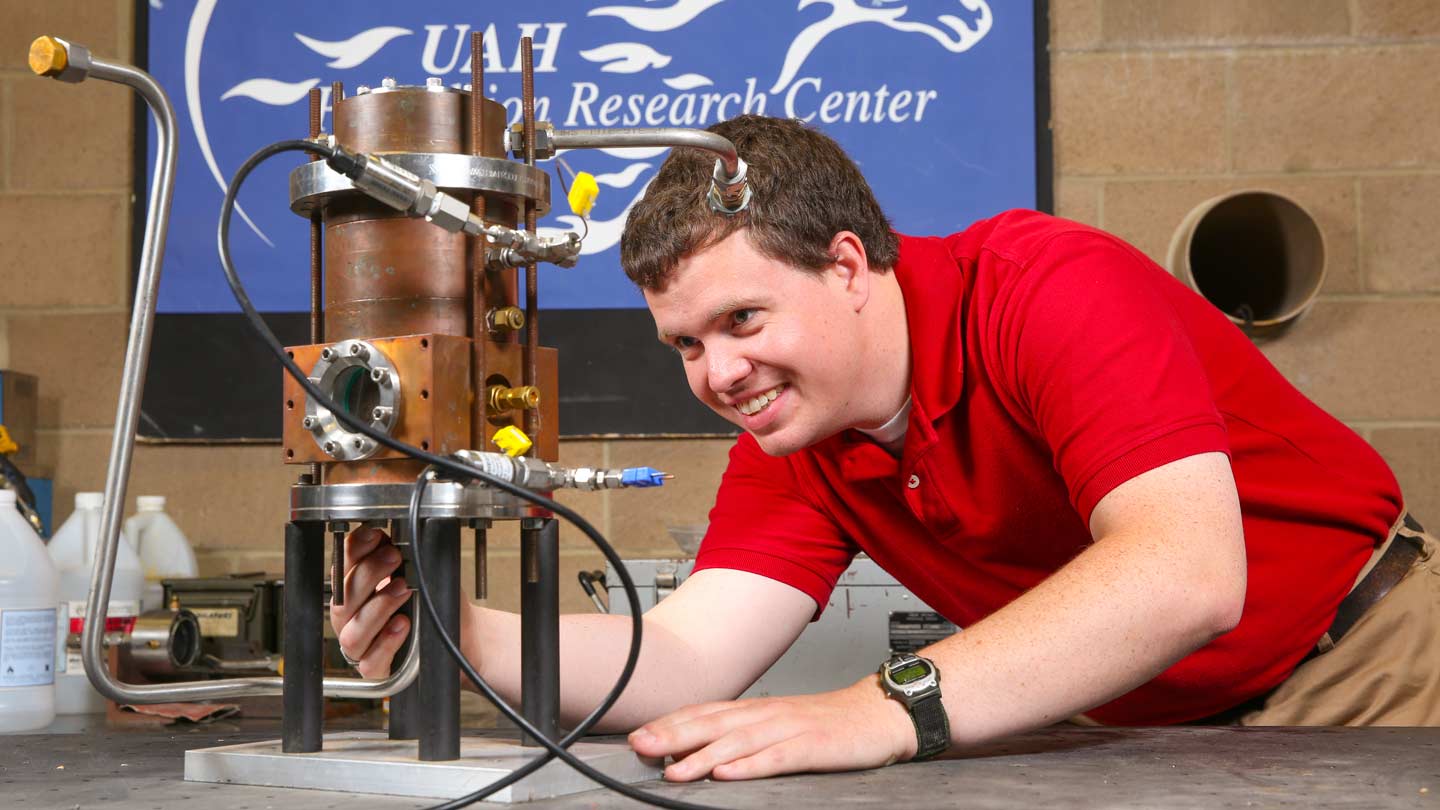 Matthew Hitt, doctoral student in mechanical engineering, is working with a hybrid engine that burns solid and liquid fuels at the same time. His testing is going on in the Johnson Research Center on the UAH campus.

At UAH's Johnson Propulsion Center, Matthew Hitt has experimented with varying solid fuel grain sizes to see how they burn at different combustion chamber pressures and oxidizer flow rates in an effort to improve the performance of hybrid engines.

"This is another step in making hybrids - which are a safer alternative to either solid or liquid engines - more practical for actual application," he says. 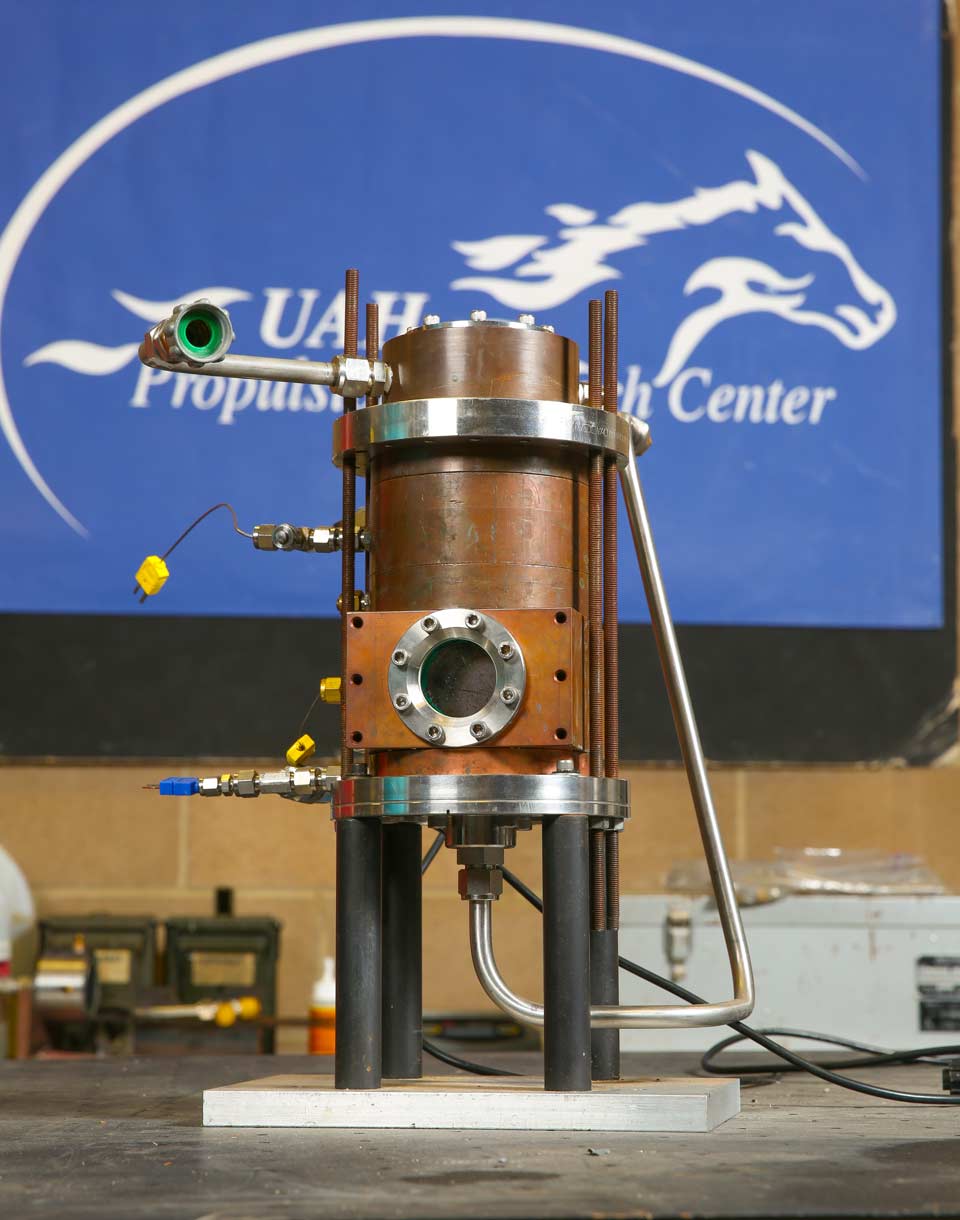 Advised by Dr. Robert Frederick, director of UAH's Propulsion Research Center, Hitt attended the 2015 Combustion Summer School at Princeton University and has submitted a paper on his work to the American Institute of Aeronautics and Astronautics 2015 Propulsion and Energy Forum, set for July 27-29 in Orlando, Fla.

Improving the efficiency has to do with improving the fuel regression rate - a scientific way of saying you get the solid fuel to burn faster so it recedes back from the flame front at a faster rate.

"By increasing the fuel regression rate - which can lead to simpler designs - you are leaving less unburned fuel, so you are not carrying all this dead weight," Hitt says.

Not having to carry fuel that won't end up getting burned could reduce the weight of the rocket, allow for use of a smaller engine for the same flight result, or allow for a larger payload due to the weight savings.

Perfecting hybrid engines has been intriguing to rocket scientists globally because of the tantalizing benefits a hybrid engine offers over both conventional solid rocket engines and over liquid fuel/liquid oxidizer engines.

Rather than having a valuable human or satellite payload sitting atop two premixed solid propellants that could explode if accidentally ignited, in a hybrid engine one propellant is a solid and the other is a liquid.

"You're not sitting on a bomb," says Hitt. Having half the combustion equation as a solid beats a liquid/liquid combination in weight and cost savings, because half of the valves and associated equipment needed to pressurize and control liquids are eliminated. And unlike a solid fuel engine, a hybrid can be throttled and shut down.

This is another step in making hybrids – which are a safer alternative to either solid or liquid engines – more practical for actual application.

But the axial injection end-burning hybrid design Hitt used for his experiments is a bit different than conventional hybrids.

In the engine Hitt is working with, "the oxidizer is injected through a porous solid fuel source, and the combustion occurs on the end of that fuel."

Visualize granules of fuel in a tube that have oxygen passed through them from one end while they burn on the other. By controlling the oxygen flow, the engine can be throttled or stopped.

"For a typical hybrid, you have your solid fuel, and your oxygen is injected into combustion ports in the fuel," he says. Efficiency is a problem, though. "Conventional hybrids have a low regression rate, so you have to have numerous ports with complicated fuel grain geometries to get the fuel flow rate up." Complicated fuel geometries are expensive to produce.

Hitt's work can be seen as something of a tiebreaker in the world of axial injection end-burning hybrids. Separate Chinese and Japanese research teams reached conflicting findings over whether the design increased fuel regression rates.

"My results say that this design does increase the regression rate. What I'm using is polyethylene as the solid fuel and gaseous oxygen as the oxidizer," Hitt says.

"In a conventional hybrid, the rate at which the oxidizer is injected does change the regression rate of the fuel. In this one, the regression rate is a result of the chamber pressure, which is not how hybrids typically work but is how solid engines work," Hitt says. "The axial hybrid has a higher fuel regression rate, and that means you can have less complicated geometries in the fuel grains."