UAH students plan to launch themselves into cubesat business 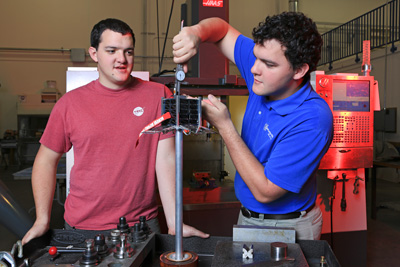 Mark Becnel, left, and his brother, Eric Becnel, with a mockup of the Chargersat-1 in the UAH Engineering Design and Prototyping Facility. The brothers plan to start a cube satellite production company after graduating with master’s degrees in aerospace engineering.
Michael Mercier | UAH

HUNTSVILLE, Ala. (November 12, 2013) - Two students soon to earn their master's degrees in aerospace engineering at The University of Alabama in Huntsville (UAH) see so much opportunity in small satellites that they have formed a company to develop the technologies.

Mark and Eric Becnel are aiming their company Radiobro at providing turnkey cube satellite services to researchers who have experiments they'd like to fly, but who don't have the resources to build their own satellites to fly them.

"There's an unfilled niche there in supplying a need if a scientist wants to take an experiment and fly it in space," Eric Becnel said. "The idea is to provide that researcher with an off-the-shelf solution."

The solution will encompass both the hardware and software necessary for the research to take place and be monitored, the brothers said.

"Maybe you've got a launch opportunity and a window to launch," Mark Becnel said. "We can help you by delivering that satellite in as fast as 12 months."

Cubesats have revolutionized research opportunities because of their smaller size and lower costs of production than their full-sized cousins. "The cubesat market is being invented now," Mark Becnel said. "The market seems to be growing in the right direction, but it needs to be nursed a little."

There’s an unfilled niche there in supplying a need if a scientist wants to take an experiment and fly it in space. The idea is to provide that researcher with an off-the-shelf solution.

Standardization allows a cubesat to be flown as a payload on any rocket, the brothers said, so that they can be used as fill-in payloads on rockets that are boosting larger satellites into space.

These "hitching a ride" flights can be incredibly inexpensive for researchers, but the hurdle is in funding the millions of dollars needed to build the kind of laboratory and machining facilities necessary to produce a cubesat, one of which can itself cost $250,000 to produce.

"It's a long process to invent and build that lab," Eric Becnel said. "It was trailblazing here at UAH when the university did that, and not all universities or research facilities can afford that kind of expenditure. There's the gap in the market that we would like to fill."

Instead of scientists having to build facilities to construct their own satellites, the brothers hope researchers will turn to their company to produce the needed hardware and software, and perhaps even to help with scheduling flight time and space.

"What we're trying to do is not novel, but it is supposed to be very competitive," Mark Becnel said, adding that the cost savings could provide researchers and universities access to space ventures that they otherwise would not be able to consider. "Getting the launch opportunities has created a whole new world. What we see now is that the people who are building these big satellites are offering lots and lots of opportunities for smaller satellites to get onboard in the extra payload areas."

The turnkey nature of the system will make it "just like plugging into your computer," Eric Becnel said. "Everything will be ready to go."

Both brothers have been heavily involved with UAH's Chargersat-1 cube satellite, due to launch the week of Nov. 19. Eric Becnel has been a team leader on the project since its inception.

"At UAH, we got to exercise what we know and have fun and learn," Eric said. "And we learned a lot about engineering a satellite and what works and what doesn't, and now we want to go out and do it."

The pair is discussing a possible partnership with the university, and they plan to talk with NASA's Marshall Space Flight Center about developing for MSFC a series of standardized cubesats that the agency can then use to fly a variety of future experiments.

They are also drawing up a business plan and visiting with lawyers as the corporation unfolds.

"We want to be sure to organize the company properly so that it will be correctly done to do business with NASA and with all the various research entities, to conform with ITAR (U.S. International Traffic in Arms Regulations) restrictions in our sales, and to handle our nondisclosure agreements and eventually our personnel agreements," said Mark Becnel. "It's an uphill battle, but it's not a hard uphill battle."