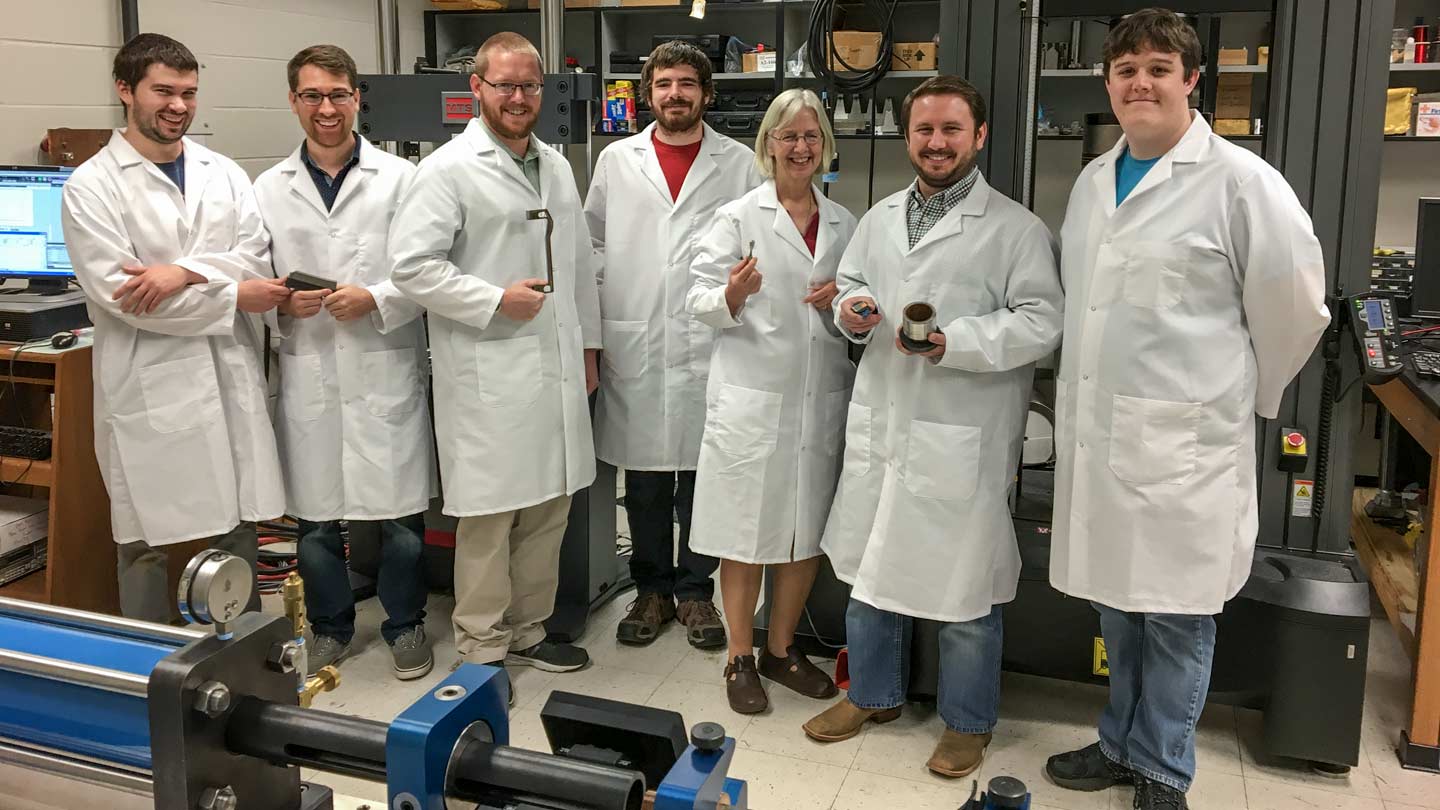 When engineers at the NASA’s Marshall Space Flight Center (MSFC) wanted to test the strength and reliability of their newest, additively manufactured rocket engine igniter, they turned to Dr. Judy Schneider for help. A professor of mechanical and aerospace engineering at The University of Alabama in Huntsville (UAH), Dr. Schneider and her students study the correlation of environmental effects on the mechanical performance of structural materials, and in particular, those produced by advanced manufacturing processes.

"The companies and government agencies that we work with have the ability to print parts using cutting-edge manufacturing processes, but they don’t necessarily know the properties of the parts they’re making – they’re just taking their best shot," says Dr. Schneider, who is a fellow of ASM International. "What we do is test their samples by looking at the mechanical properties and the microstructures, and then we analyze the results and report back so that the company or agency can modify their printing process accordingly."

In this case, the additive manufacture of the igniter prototype used by the NASA MSFC was produced by DMG-Mori, a global machining manufacturer. Using a process known as automated blown-powder laser deposition, they were able to save both time and money by printing a single bi-metallic part rather than manufacturing and brazing together multiple parts. But before the NASA MSFC engineers could hot-fire test it, they had to find out from Dr. Schneider and her team if the resulting structure could withstand the rigors of the environment.

These students now have an in-depth knowledge of advanced manufacturing processes.

"MSFC has invested heavily in this additive manufacturing process, but they were worried about the resulting mechanical properties," she says. "So we reached out to DMG-Mori, and they suggested we send someone to help make samples of the Inconel and copper used in the igniter for us to test." That someone ended up being master’s mechanical engineering student Chris Hill, who spent a spring semester at DMG-Mori’s Hoffman Estates, Ill., facility, where test specimens were produced to verify the parameters for fabrication of the igniter.

"First we had to figure out how to make the Inconel test coupons using the blown-powder laser deposition process, and then we had to get it to bond to the copper," says Hill, who also earned his undergraduate degree in the field from UAH. "That was the most challenging, because we had nothing to go off. We couldn’t ask other companies what they were doing because of the proprietary nature, so we really had to think outside the box."

By the time he returned in May 2016, he had successfully prepared 42 test coupons – 27 for tensile testing and 15 for fatigue testing. Hill worked with fellow master’s student Ryan Anderson to conduct a variety of tests on the samples to analyze the microstructure and mechanical properties. "We did tensile, fatigue and hardness testing, as well as void analysis," says Hill. "Then we analyzed the results from the mechanical tests we ran." The properties of the base materials are now the focus of Hill’s master’s thesis.

With the baseline properties in hand, it was time for Anderson to evaluate the bi-metallic bond – a process that involves mounting a piece of the test coupon within a phenolic and polishing it until the grain structure is visible under an optical microscope. "It’s difficult to prepare these samples when you have a hard material like Inconel and a soft one like copper because you have to spend a lot of time polishing it," says Dr. Schneider. "You also have to be very detail oriented, and document and take pictures of everything so that you have the answer to any questions about the process." Fortunately, she adds with a smile, "Ryan is a whiz at this!" 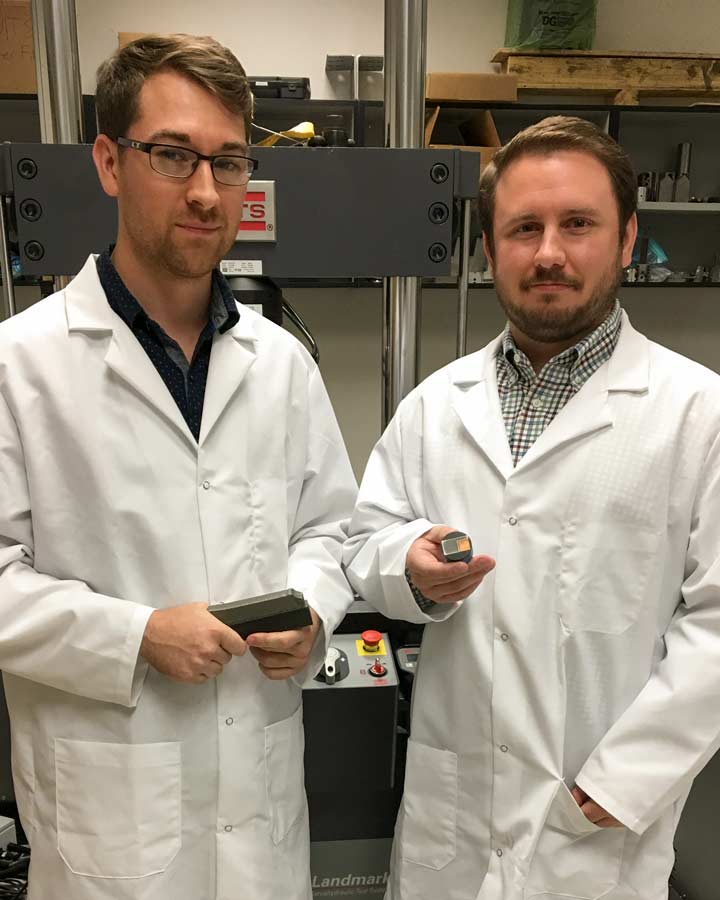 Anderson, whose master’s thesis is focused on how different processes affect the resulting interface in bi-metallic builds, says he was mainly focused on the bond between the Inconel and copper and evaluating it. "I have been looking at the microstructure to see how the bond is created using different additive manufacturing processes, like wire feed and blown powder," he explains.

What Hill and Anderson found was that the igniter fabricated using the blown-powder process was metallurgically sound, thanks to the interfusing of the two metals involved. That assurance subsequently allowed NASA MSFC to schedule and successfully subject the igniter to hot-fire testing in July 2017. "It was nice to see it come to fruition like that, because when you work in a laboratory you don’t always have that opportunity," says Dr. Schneider. For Hill, being able to follow the process from test coupon to a finished product was "the cherry on top," he says.

But while the project itself is over, the students are continuing to reap the rewards of such a valuable experience. Hill has since been asked to join MSFC’s team as an intern, and both he and Anderson are working with Dr. Schneider, NASA MSFC, and DMG-Mori on a paper for publication in a peer-reviewed journal. The results of this project were also presented at the recent 68th International Astronautical Congress meeting in Adelaide, Australia, in September 2017, and in the spring, Ryan will present at the Minerals, Metals, & Materials Society’s 2018 annual meeting in Phoenix, Ariz.

"These students now have an in-depth knowledge of advanced manufacturing processes and how to design for each particular process," says Dr. Schneider. "It’s fun for us because we’re learning all the little tricks, and the students earn their graduate degrees in a very relevant field!"