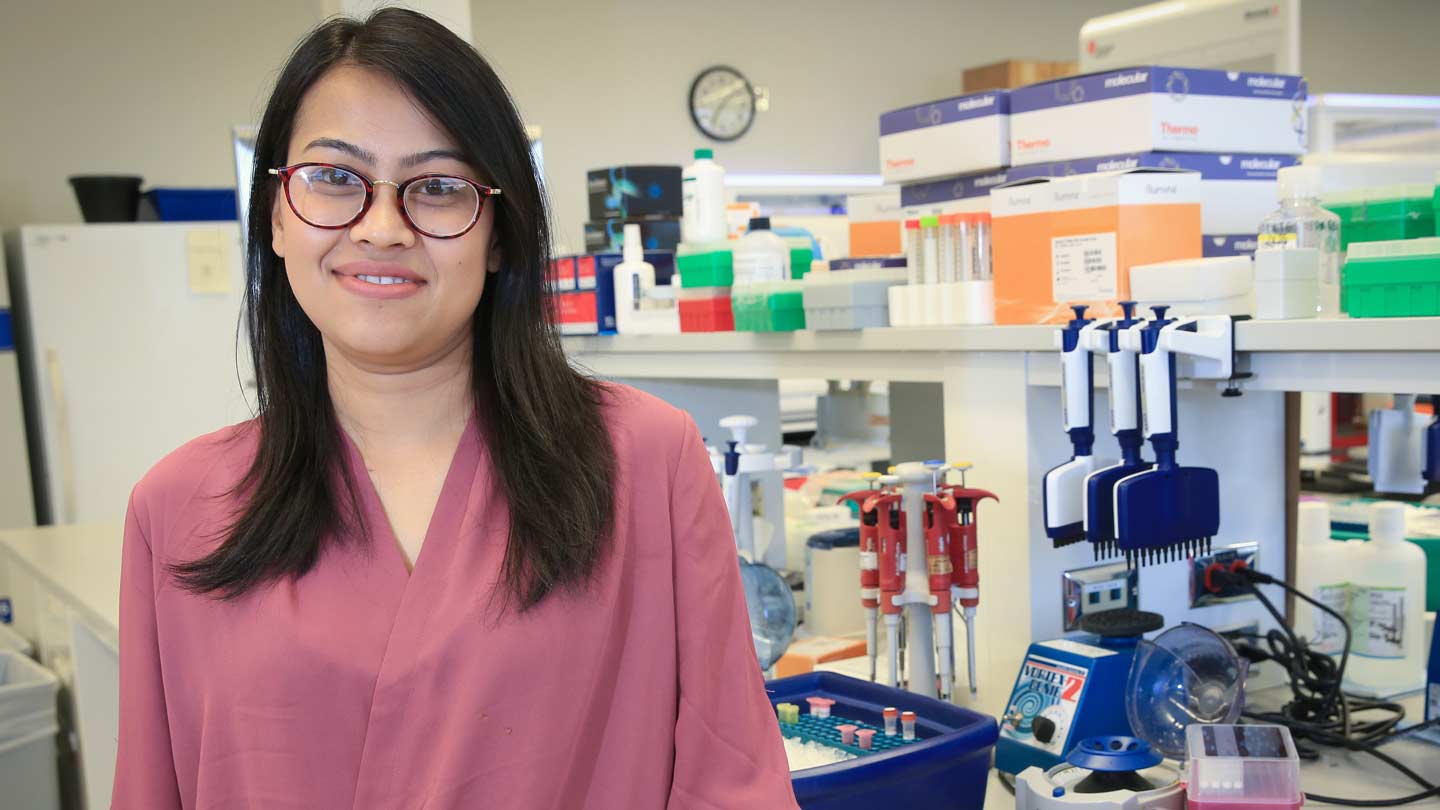 UAH Ph.D. student Shristi Shrestha is honing her skills in single-cell gene expression as a graduate research assistant at the HudsonAlpha Institute for Biotechnology. She recently served as first co-author of a paper that was published in the journal "Cell Reports."

Shristi Shrestha is both literally and figuratively a long way from her days as an undergraduate student conducting research on medicinal plants. The Nepalese native left her homeland in 2012 to earn her Ph.D. in biotechnology science and engineering from The University of Alabama in Huntsville (UAH) and has managed to acquire an enviable expertise in genetic research since then. "It’s a very humbling experience to remember being so new to research to now doing genomic research that is important for understanding life-threatening diseases," she says.

Shrestha had initially intended to focus on biomolecular aspects of medicinal plants for her graduate career, building upon the work she’d done in Nepal. "My mom is a botanist and her passion and her work led to my interest in learning more about medicinal plants, so I came to the U.S. to gain more research experience in plants," she says, adding that her mother is also pursuing a Ph.D. at a university in Nepal. "But after coming here, I realized the value of interdisciplinary skills in research and decided to see what other opportunities were available in biomolecular research. We don’t know our interests elsewhere if we’re focused on just one thing."

UAH’s program proved the perfect vehicle for her to explore her options. Along with core courses in biochemistry, cellular and molecular genetics, and bioprocessing/bioseparations, students must also participate in two six-week laboratory rotations and a 10-week mentorship program at a business or research laboratory with relevance to biotechnology science and engineering. For Shrestha, that meant spending time under the mentorship of Dr. Shawn Levy, faculty investigator and founding director of the Genomic Services Laboratory (GSL) at the HudsonAlpha Institute for Biotechnology. "I was amazed by the cutting-edge sequencing technologies and diverse genetic research going on at the lab, sequencing DNA from all kinds of animals to microbes and humans," she says. "And I loved HudsonAlpha’s unique environment, where business and science are happening on the same campus."

That rotation soon turned into a graduate research assistantship during which Shrestha was exposed to the sequencing services that the GSL offers to academic and private institutions around the world. One long-time collaborator, Powers Research Group at Vanderbilt University, already had a study underway looking at pancreatic islet dysfunction in patients with type 1 diabetes (T1D). "They were using a novel approach to investigate pancreatic tissues and isolated islets from the same T1D patient to study their functional and molecular features," she says. "So with the help of experts in the GSL, I was able to contribute my RNA-sequencing expertise to learn the features of islets from T1D patients at a genetic level."

I was amazed by the cutting-edge sequencing technologies and diverse genetic research going on at the lab.

As Shrestha explains, islets are clusters of cells embedded in pancreatic tissue and primarily composed of insulin hormone-producing β cells and glucagon hormone-producing α cells. Regulated release of insulin and glucagon maintains required glucose levels in the body, which is an essential source of energy for cells. In patients with T1D, a less-common form of diabetes prevalent in children and adolescents, the body’s immune system mistakenly attacks its β cells, compromising insulin secretion; that, in turn, causes an imbalance of blood glucose. Consequently, T1D patients require lifelong daily insulin injections to ensure their blood glucose is in a desirable range.

But while researchers previously believed that all β cells were lost in TID patients, recent studies have shown that some, in fact, survive – sometimes up to 50 years after diagnosis. "Our study," says Shrestha, "was to find out whether those remaining beta cells were normal or dysfunctional."

Ultimately, they were able to not only confirm that the β cells retained normal insulin secretion capacity, but they were also able to determine that the α cells were compromised as well, showing abnormal glucagon secretion. "We further isolated the α cells from T1D islets and were interested to see what genes were being expressed in them to understand cellular processes being affected," she says. "We found that they had abnormal expression of the transcription factor, which regulates other important genes for proper α cell function, and that this abnormal expression was partially resolved when the islets were transplanted to a non-diabetic environment." 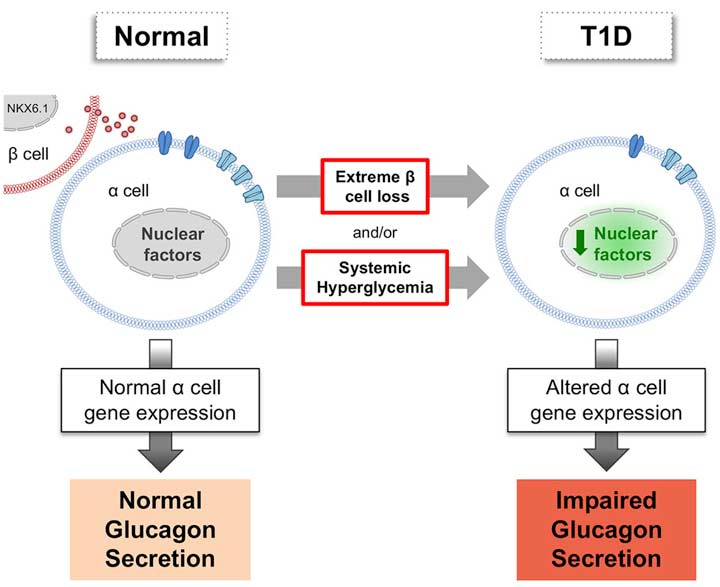 With such results, they were also able to show possible mechanism of impaired glucagon secretion in the α cells of T1D patients, which had not been well understood up until then. "This shifts the focus to the α cells and to possible, future therapeutic approaches like an intervention to control glucagon secretion," she says. Nevertheless, she cautions, there are plenty of questions that need to be answered before this new information can be turned into a functional treatment for the disease. "Our study raises a lot of interesting questions to pursue for further research, but more progressive research is required to understand the main cause of T1D."

The study’s findings were published last month in the journal "Cell Reports," with Shrestha serving as first co-author on the paper, "α Cell Function and Gene Expression Are Compromised in Type 1 Diabetes." She is quick to point out, however, that it was a team effort from the start. Key to its success were her fellow first co-authors Marcela Brissova, Ph.D., research associate professor of medicine at the Vanderbilt University Medical Center; Vanderbilt University Ph.D. student Diane Saunders and MD/Ph.D. student Rachana Haliyur; and corresponding author Alvin Powers, MD, who serves as the Joe C. Davis Professor of Biomedical Science and director of the Vanderbilt Diabetes Center. "This study is a result of contributions from many investigators all over the country and a deep diabetes expertise at Vanderbilt," she says. "I, my advisor, Shawn Levy, and specialists at the GSL, whom I learn from, were glad to contribute to findings of the paper."

And their collaboration is still not over. "I’m taking this project a little further by looking at genes expressed on a single-cell level," says Shrestha. "It’s a new technology and has been widely applied to studying genes expressed in single cells of normal and diseased tissues in the body." As she explains, traditional gene expression studies typically process thousands of cells at a time and average the expression of a gene across all cells; by contrast, the single-cell approach looks at the genes expressed in every individual cell. "We are only recently learning that no two cells are identical, so we’re not getting the full picture of cell-cell variability with the average approach," she says. "The single-cell approach will give us an understanding of cell-to-cell differences and allow us to find subtle changes in cells, which can lead to different cell functions or identities within a particular cell type, or even unravel new cell types. My hope is that I can leverage this technology to understand the fundamental biology of pancreatic islet cells at high resolution."

As for Shrestha’s plan after graduation, she is hoping to leverage her research experience into a full-time position in the field. "Single-cell research is like any new technology – it comes with its challenges," she says. "Given the opportunity, I would want to pursue a research position to work on addressing those challenges and apply it to diabetic research." Not to mention, working in diabetic research is personal for her. "My family has a history of type 2 diabetes, which is also associated with the dysfunction of islets and abnormal levels of glucose in the body but with different mechanisms," she says. "It definitely helps bring my passion for work to another level when I am studying a disease that has touched my loved ones’ lives and may possibly affect mine in the future."