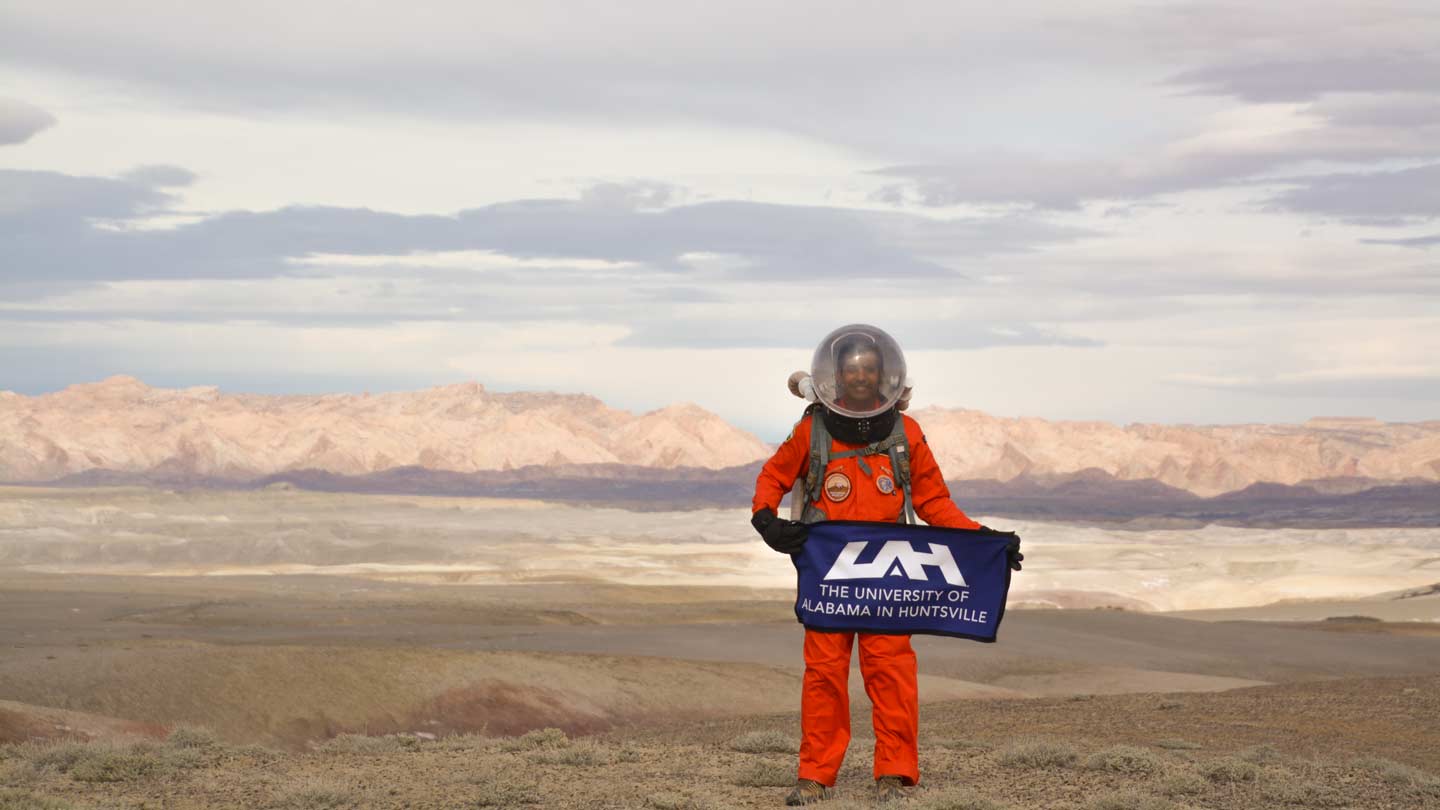 Saroj Kumar spends a lot of time thinking about Mars. As a master’s candidate in aerospace engineering at The University of Alabama in Huntsville (UAH), his research centers on the use of nuclear fusion propulsion to send rockets – and astronauts – to other planets. So it was something of a surreal experience when Kumar actually had the chance to spend two weeks as a "Marsnaut" at the Mars Desert Research Station (MDRS) in Hanksville, Utah, whose unforgiving environment is Earth’s closest approximation to that of the Red Planet. "That feeling of living my dream since I was nine of one day going to Mars was really special," he says. 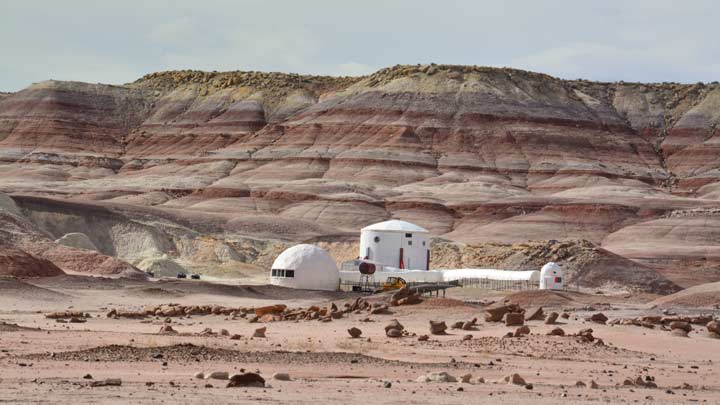 The MDRS is located in Hanksville, Utah, whose harsh environment most closely approximates that of the Red Planet.

Kumar was an undergraduate at the REVA Institute of Technology and Management in Bangalore, India, when he first learned about the MDRS, a full-scale analog facility designed for Earth-based Mars-related research that is owned and operated by the Mars Society. But rather than apply as an individual who would then be matched with an unknown crew, he opted instead to form a team of colleagues with whom he’d be more comfortable sharing the station’s living area – a cylindrical habitat, or "hab," just eight meters in diameter. "It’s such close confines that you need a good rapport!" he says with a laugh.

So from across the globe, Team Planeteers assembled. Joining Kumar were Dr. Mamatha Maheshwarappa, a space systems engineer at QinetiQ; Sneha Velayudhan, a graduate engineering student specializing in advanced wireless communication systems at the Rochester Institute of Technology; Arpan Vasanth, a product design engineer at Faurecia; Dr. Sravani Vaddi, a research fellow at National Center for Radio Astrophysics; and Sai Arun Dharmik, a recent graduate in ocean and atmospheric sciences from the University of Hyderabad.

With invaluable assistance from several mentors, including NASA Astrobiology Institute director Dr. Penelope Boston, the team submitted their application in early 2016. A few months later, they were informed of the Mars Society’s decision: Team Planeteers had been selected for the station’s 16th field season and would be serving as the MDRS’ Crew 174 from Jan. 28 to Feb. 12 of the following year. "It was a really exciting moment," says Kumar. "We found out later that only one out of every three teams gets accepted." 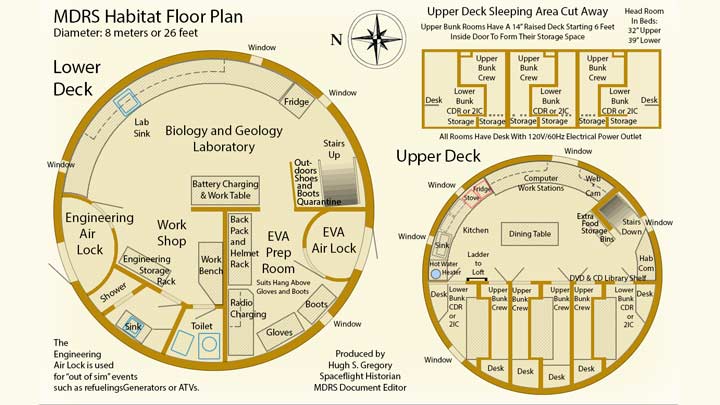 The six members of Team Planeteers lived in the station’s hab, a two-story structure just eight meters in diameter.
Credit: The Mars Society

The crewmembers were provided with a list of clothing and supplies they would need to bring, which ultimately included space suits sponsored by QinetiQ and experiment kits sponsored by NASA’s Ames Research Center. The plan was to assemble in Grand Junction, Colo., on Jan. 28 to make the drive as a team to the MDRS, a little over 150 miles to the west. But when crew commander Dr. Maheshwarappa was delayed by four days due to travel issues, Kumar stepped up lead the Planeteers through the scheduled handover ceremony.

"The previous crew, who was about to leave, met us about 60 miles from the station and brought us back," he says. "They walked us through the process and explained how everything worked, went over the issues they’d had, and left the next day." For the next two weeks, the team had no contact with the outside world beyond a nightly two-hour communication window with ‘mission control’ to submit their report of the day’s activities and receive information about the next day’s weather.

Each day began at 5 a.m. with a modest breakfast of dehydrated food and milk. "That was not great," laughs Kumar. "But because it’s going to be that way on Mars, we had to learn how to deal with it." Not only was space at a premium given the hab’s small size, but so too was water – an issue that worsened when the water pump broke about a week into their stay. "It happened in the middle of the night, so we made a team decision that we needed to go out and fix it," he says, explaining how they cobbled together a patch until they received a new pump on a resupply mission a few days later. "We were so happy to be able to flush again!" 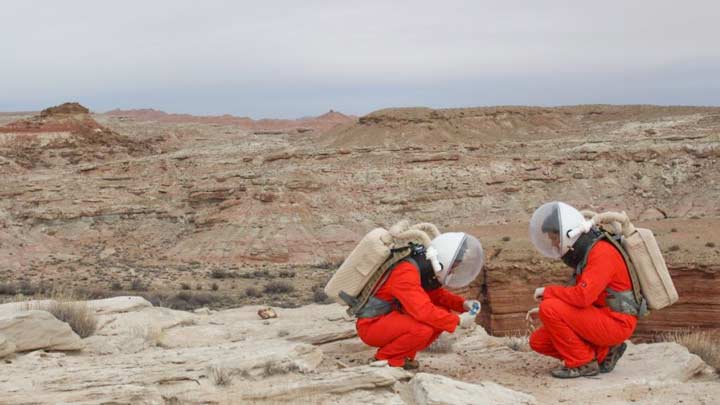 After breakfast, the crewmembers would then split off individually or partner up to work on their respective research experiments. For Kumar, the focus was on human-microbial contamination on Mars and sample protocol implementation to minimize astronaut contamination; other experiments examined the growth of fenugreek with different levels of vitamin D, the engineering challenges posed by the Martian environment, and the geological challenges of extravehicular activities (EVAs) outside of the station’s hab.

"The EVAs were the most surprising thing about the experience," says Kumar. To begin with, they required a significant investment in human resources. "The protocol was that there had to be at least two crewmembers outside of the habitat and two inside," he says. "And since we did an EVA every day, I personally went on five or six EVAs to perform my experiments and to be a buddy for others." Navigation was also difficult. "We were provided with maps, but we’re so used to using GPS that we got lost a lot. We ended up using a lot of hand signals because the wind made it hard to communicate."

And finally, there was the unpredictability of the weather. Outside the hab, a combination of freezing temperatures, gusting winds, and dust storms battered the Marsnauts as they attempted to move about in their bulky space suits, each with a 40-pound life support system. "Every day I planned something and I couldn’t complete it – a 20-minute task could take two hours," says Kumar. "We’d come back and couldn’t move for an hour or two, and we’d still have to complete our tasks and send our reports." 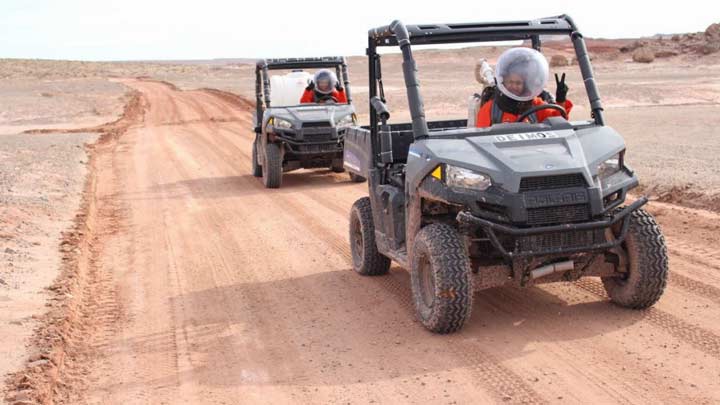 The team used rovers to navigate the challenging desert terrain.

But far from being demoralized by the challenges they faced while at the MDRS, the crew relished them. "There’s no point in preparing for a year and then not being authentic," says Kumar. It also reminded them of just how precious their own planet is in comparison. "When I was young I would have gone to live on Mars forever, but now I realize I’d love to go on a round-trip mission," he says. "On Earth you have all these beautiful things, but on Mars we never saw any other signs of life – no birds, no snakes, no bugs, nothing! It made me understand how special we are, how we need to take care of this planet and not take it for granted."

All too soon, the time came for Team Planeteers to wind up their mission and hold a new handover ceremony to welcome the next crew to the MDRS. Kumar, now back at UAH, has returned to his research on nuclear fusion propulsion. With his advisor, Dr. Jason Cassibry, an assistant professor in the Department of Mechanical and Aerospace Engineering and a researcher at UAH’s Propulsion Research Center, he hopes to reduce the amount of time it take astronauts to travel to Mars. "Currently it takes nine months to get to there and then you can only stay for one month before spending nine more months to come back," he says. "With fusion propulsion, we believe we can get there in less than 90 days."

But while Kumar is skeptical that humanity will terraform Mars in his lifetime, his experience at the MDRS has only served to deepen his commitment to – and enthusiasm for – helping those who will one day do so. "From my childhood in India, I’ve been really passionate about space," he says. "I plan to get my Ph.D. here at UAH, and then my dream is to help further the Mars exploration program."