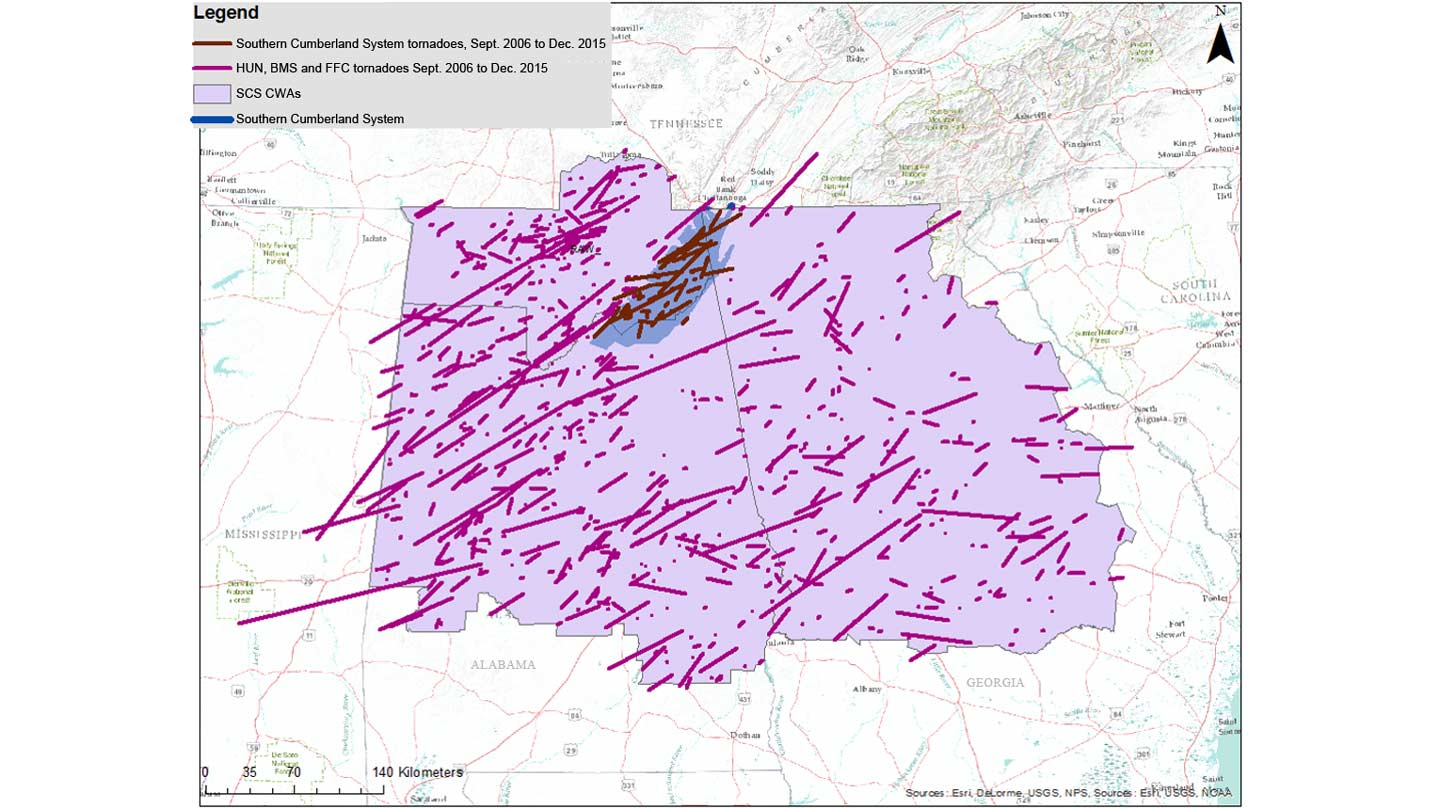 Squeezed upward over the big toe of the Cumberland foothills, wind flowing north in front of a storm system accelerates over Sand Mountain in the northeastern corner of Alabama – until it hits the far edge.

Where Sand Mountain tumbles 700 feet into the Tennessee River Valley the accelerated wind suddenly slows. Scientists at The University of Alabama in Huntsville (UAH) think that interface between fast and slow winds might help explain why tornadoes are more apt to form on Sand Mountain than almost any other place in North Alabama, a phenomenon ironically known as Sand Mountain "magic."

Supported by an almost quarter-million dollar grant from NOAA, a team of scientists and students in UAH's Atmospheric Science Department and the Earth System Science Center will spend the next year gathering data, running that data through a numerical model and trying to better understand why the mountainous corner of the state – which includes Sand Mountain, Lookout Mountain and the Wills Valley in between, as well as the Tennessee River Valley – is such an active spawning ground for tornadoes.

"With Sand Mountain, we have strong evidence that something physical is going on up there," said Tony Lyza, a UAH doctoral student in atmospheric science basing his dissertation research on the Sand Mountain project. "We looked at the start points for all the tornadoes that effected that area over the past 10 years. There were 49 tornadoes total, and of those 32 formed on top of Sand Mountain.

"Sand Mountain is generally about 15 miles wide. But if you look at the start points where tornadoes touched down, 16 of those 32 formed within three miles of the northwestern edge. That's not a huge sample size, but it's enough to make you question the possible physical processes that might impact those storm systems as they move atop that plateau."

Testing the idea that tornado genesis might be linked to features in the surface landscape has been an ongoing (but usually unfunded) project for Dr. Kevin Knupp, who leads UAH's severe weather research team. While there is an abundance of anecdotal and statistical evidence linking such things as topography and surface roughness to tornado formation, this is the first time comprehensive data from mobile radar and atmospheric profiling systems will be combined with high-resolution numerical simulations using the National Center for Atmospheric Research's Weather Research and Forecasting (WRF) model.

"We don't have enough instruments to sample all points in space across an area that large," Knupp explained. "But the high resolution modeling that will be done should give us some answers about exactly how air flow varies around these features to influence super cell storms and squall lines as they pass over the mountain."

Early model results might also suggest spots around the mountain and adjacent valleys where it would be useful to locate research instruments when the on-the-ground portion of this project goes into full swing.

Starting March 8, the team in UAH's Severe Weather Institute, Radar and Lightning Laboratory will be joined by research teams from across the U.S. for the second year of the VORTEX Southeast field campaign, spending two months gathering detailed data from storms interacting with the Sand Mountain area.

"Maybe the models can give us indicators of where to sample," Knupp said. "Then we can validate the numerical models, which would give us more confidence in the model results."

Running WRF at higher than normal resolution will be essential, given the size of the circulations being studied. Also used to study large weather and storm systems, WRF more typically considers a box 3 to 5 kilometers on each side (and about 200 meters tall) as one pixel or data point.

That won't work in this case. To get meaningful results, the model will be run at 250-meter horizontal resolution for this experiment, said UAH's Dr. John Mecikalski, a UAH professor of atmospheric science who will do the modeling with research scientist Zuanli Li.

That resolution comes at a cost in computing time. Because what once was a single 3 x 3 km data point in space is now 144 data points, "a high resolution model run simulating a six-hour weather event over several Alabama counties might take two or three days of computer time to run," Mecikalski said.

"But the key components of the tornado genesis process occur from one kilometer in altitude down to the ground, so it's important to see in detail what's going on in that area," he said. "Plus, in an area that small it might not take much in terms of ground features to affect that."

The simulation work will begin by looking at conditions in northeast Alabama the evening before the April 27, 2011, tornado outbreak.

Knupp and Lyza, however, have work to do before they get those WRF model results. They and other members of UAH's severe weather team have been scouting the Sand Mountain area and the Tennessee River Valley to its west for suitable sites on which to set up portable weather instruments during VORTEX SE.

"The first thing we have to do is find test sites for the radars and the profilers," Lyza said.

A suitable radar site, Knupp said, isn't cluttered with trees or buildings, but has an unobstructed view "almost down to the horizon." At least one site the team explored near Pisgah had its view broadened when an EF-4 tornado on April 27, 2011, knocked down all of the nearby trees.

But they aren't waiting for VORTEX SE to start gathering data.

"For us, we'll be out there collecting data any time the weather is right," Knupp said.

While better understanding of severe weather is the goal, the weather doesn't have to be severe for the team to collect useful data, Lyza said. A southerly wind and enough rain (or in warm weather, insects) to "see" on UAH's portable Doppler radars will be enough; Doppler can't pick up atmospheric or wind features in clear air.

The end goal is to learn enough about Sand Mountain "magic" to inform decisions made by forecasters during severe weather, Lyza said.

"If we could give them physical explanations of what's happening, that could be another tool they might use, an extra cause for awareness when the weather over there gets bad."