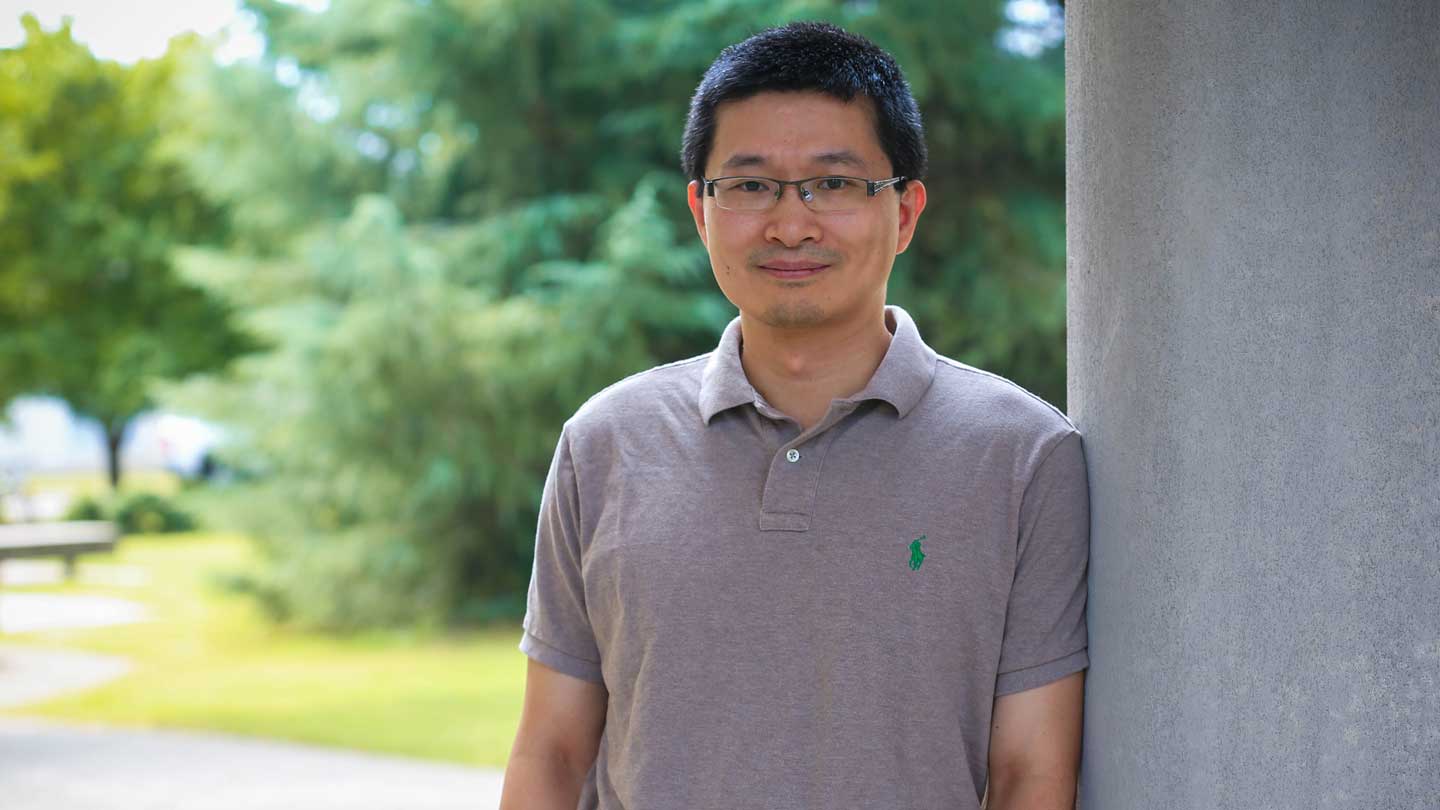 Dr. Ming Sun discovered the galaxy ESO137-001 and is part of the first team to use a new Multi Unit Spectroscopic Explorer at the European Space Observatory in Chile to study its collision with the Norma Cluster.

A University of Alabama in Huntsville (UAH) assistant physics professor is on the first scientific team to use new observation equipment to observe the collision of a galaxy he discovered with a galaxy cluster - a kind of slow-motion cosmic car wreck.

The reason I am part of the current group is that I have a lot of history with this object. I discovered it and I have accumulated a lot of data on it.

As part of an international group, Dr. Ming Sun is involved in the effort to better understand turbulence created by the celestial wreck, to explore how the collision affects how new stars are formed, and to increase understanding of the origin and expansion of the universe relative to time.

It's an added scientific thrill for Dr. Sun, who is a co-author of a paper on the group's findings, because he discovered galaxy ESO137-001 back in 2005 by using observations made by the Chandra X-ray Observatory and the XMM-Newton X-ray Observatory. He found the galaxy while it is in the process of colliding with a much larger galactic cluster called the Norma Cluster. The research was published today in Monthly Notices of the Royal Astronomical Society. 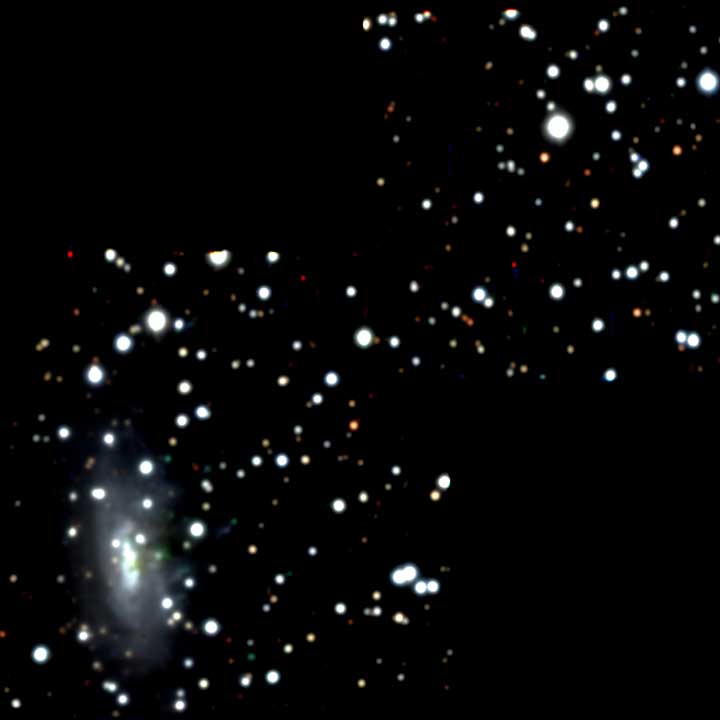 MUSE image of the galaxy ESO137-001. This galaxy is fast approaching the center of a rich galaxy cluster and it interacts with the hot ambient gas.

"The reason I am part of the current group is that I have a lot of history with this object," Dr. Sun says. "I discovered it and I have accumulated a lot of data on it."

Used for the first time, a brand-new instrument called the Multi Unit Spectroscopic Explorer (MUSE) on the 8-meter Very Large Telescope (VLT) at the European Space Observatory (ESO) in Chile provided scientists an extremely detailed view not possible before. MUSE is a panoramic integral-field spectrograph that a combines a wide field of view with improved spatial resolution to provide researchers with a much finer grade of spectrometry.

The team used MUSE to provide detailed observations of ESO137-001 as it plunges into the Norma Cluster, leaving behind a tail of gases and mass as the cooler gas in the galaxy encounters drag from the hot, X-ray emitting gas between galaxies in the Norma Cluster. 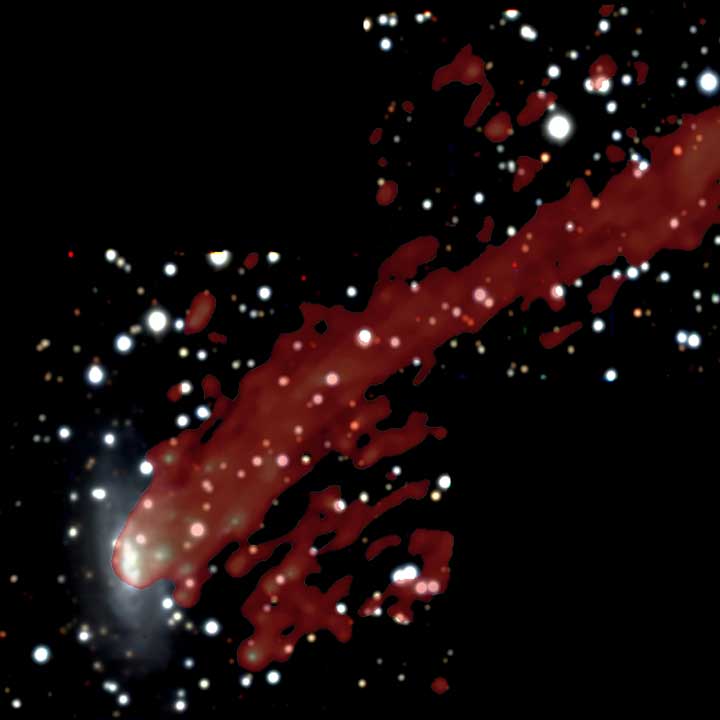 MUSE image of the interstellar gas that is lost by the galaxy during the interaction with the galaxy cluster.

Called ram-pressure stripping, its eventual effect is to halt the colliding galaxy's ability to form new stars by robbing it of its raw materials as it is assimilated into the galaxy cluster. "A galaxy cluster is a concentration of galaxies," Dr. Sun said. "It's like a central hub of the universe." The interior of galaxy clusters, or the space between galaxies, is not empty but inhabited by the intracluster medium (ICM). While the densities of the ICM are many times lower than the Earth's atmosphere, pressure differentials do matter and the ICM densities are still on average 1,000 times larger than the average density of the universe.

In space temperature differentials matter, too, and the effect of gravitational energy from the cluster's mass heats its gases to higher temperatures than the surrounding space or the gases in single galaxies that are not part of a cluster. "With such high temperatures, the gases emit x-rays, so that's how we detect them," Dr. Sun said. "When you have spectrometry, you know the velocity of the gases by using the Doppler effect, and you can find the composition of the gases. The bulk of the mass component is actually dark matter. We know that it exists, but we don't know what it is made of."

Because of high mass concentration in galaxy clusters, their galaxies move very fast.

"Galaxies in this cluster are moving very fast," Dr. Sun says. "They are moving on average 2,000 kilometers per second and they are moving in the ICM that is much denser than the average conditions in the universe."

To get an idea of how fast that is, NASA's Juno spacecraft in 2013 became the fastest man-made object when it was slingshot around Earth toward Jupiter at a relatively pedantic 40 kilometers a second. 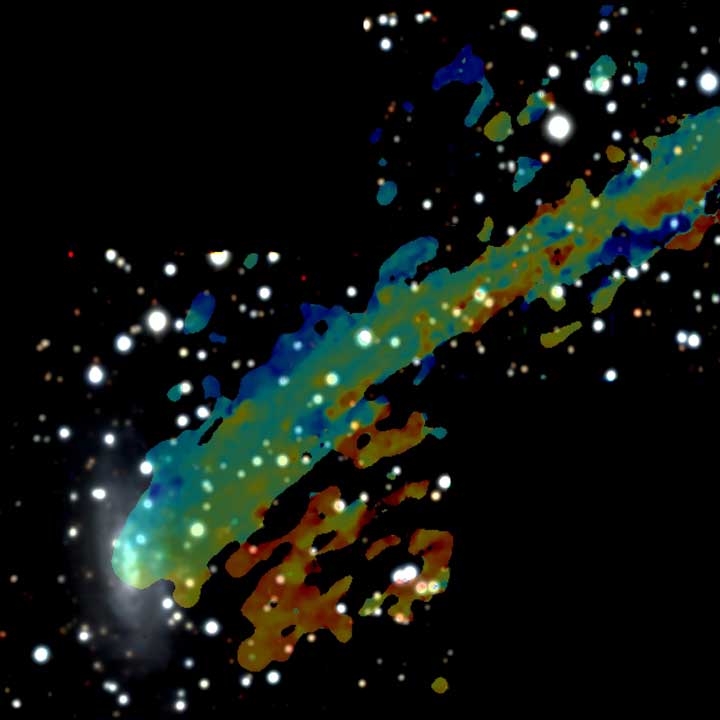 False color map of the gas bulk velocity in the plane of the sky, where blue is approaching and red is receding.

When a galaxy like ESO137-001 meets a much larger galaxy cluster like the Norma Cluster, the hot, dense, fast gases inside the larger object create drag forces.

"The drag forces are actually proportional to the density of the gases between the galaxies in the cluster and also the square of the gas velocity, so it's very high," says Dr. Sun.

Much like your open jacket will ripple behind you if you stand facing a very strong wind, Norma's gases strip the incoming ESO137-001 galaxy of its own gases and dust, creating a long tail behind it that is studded with newly formed stars and eventually shutting down its star-forming capacity.

Part of Dr. Sun's earlier research on ESO137-001 discovered two tails had been created in this process, a surprise for scientists that still is not understood. His research also surprisingly found that star formation is happening in the stripped gas outside of the galaxy, while astronomers generally only find star formation happening in galaxies.

Scientists are trying to better understand the turbulence created in the tail of gases stripped from ESO137-001 and how it affects star formation and energy transfer.

"What's really interesting is a velocity map of the tail," Dr. Sun says. On the map, areas colored red are moving away from the point of observation and areas colored blue are moving toward it. "It's important to understand the magnitude of the turbulence." 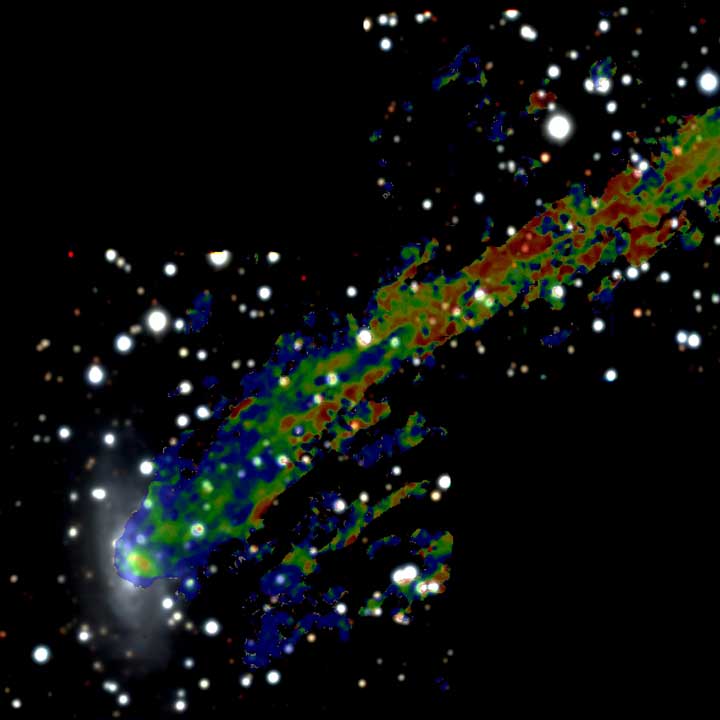 False color map of the gas velocity dispersion, which is a metric of how irregular the gas flow is. Red indicates turbulent motion, while blue indicates more calm flow.

Researchers are interested in how that turbulence affects the transfer of kinetic energy to thermal energy. "The ICM accounts for the majority of the baryons in the cluster, while 80 percent of the mass in a galaxy cluster is in dark matter," Dr. Sun says. "We cannot directly observe dark matter, so we use baryons to trace the mass of dark matter, because that is the majority of the matter we can directly see in the cluster."

Astronomers can directly measure the total thermal energy of galaxy clusters, which can be converted to the mass of the cluster. All of these observations serve to illuminate the underlying energy transfer that is going on as the bodies collide.

"It depends on how fast the kinetic energy converts to the thermal energy of the gas," Dr. Sun says. "In this work, because we have the velocity data, we are able to derive the timescale of the process."

Further research could shed new light on studying cosmology with galaxy clusters - the study of the origin, evolution and future of the expanding universe.

"We need to do very precise cosmology nowadays," Dr. Sun says, "to determine the connection of the expansion over time."