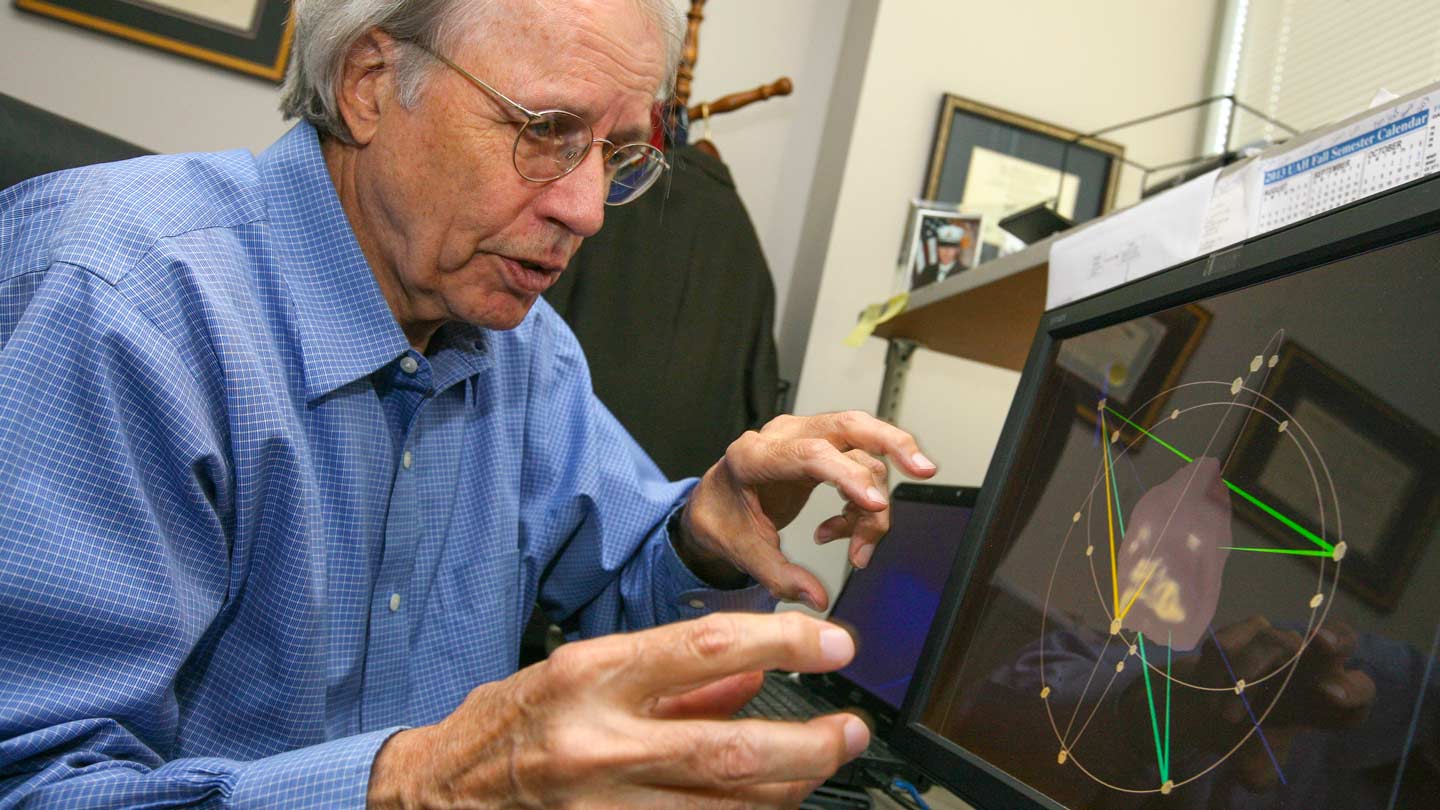 Dr. Richard Fork has been awarded a patent for a space-based system that relies on lasers to generate and deliver energy to spacecraft.

A space-based system that relies on lasers to generate and deliver energy to spacecraft has won a University of Alabama in Huntsville (UAH) professor a U.S. patent and could become a first-line defense against asteroids on a collision course with Earth.

Dr. Richard Fork's system uses multiple spacecraft located in specific sets of Earth orbital paths. The spacecraft are always in positions that enable them to continuously collect energy from the sun in space and continuously deliver that energy on request in a variety of forms as coherent light.

"I see this patent as a useful step in making efficient and effective power infrastructures available to the regions of space surrounding an asteroid or planet orbiting a star," says Dr. Fork, a professor of electrical and computer engineering.

The system could be configured to provide energy to other spacecraft or for application of the delivered energy to maximally efficient redirection of an asteroid or related object that is discovered to be on a collision course with Earth.

I see this patent as a useful step in making efficient and effective power infrastructures available to the regions of space surrounding an asteroid or planet orbiting a star.

"The patent is significant in that it gives UAH an advantage in launching what may be the first enterprise designed to provide energy generated in space and delivered in space for commercial purposes, as well as for non-commercial applications of general interest, such as successfully redirecting asteroids or other objects that may threaten Earth," says Dr. Fork.

"This method is designed to use optical phenomena - again quantum optical phenomena - but very well proven and widely accepted optical quantum phenomena to maximize the efficiency and precision of the processes," he says. "Sunlight does, of course, distribute energy in space. However, energy in the form of sunlight cannot be directed, delivered or concentrated nearly as precisely and efficiently, or at the peak energies that are maximally efficient for propulsive thrust, as can the coherent light generated by laser systems."

"For example, the maximum distance for efficient delivery using receiving and transmitting apertures of one meter radius and light of one micron wavelength is roughly equal to the radius of Earth, or about 6 megameters," says Dr. Fork. "This transmission distance increases quadratically with the radii of the transmitting and receiving apertures, which are assumed equal here.

"What we have found in our current examination of the problem are the simplest configurations that are required to satisfy our goal of an optically based power infrastructure in space," he says. "We essentially seek a means of delivering useful levels of power as coherent light anytime and anywhere."

The system could be readily deployed, and that could be good news to NASA, which has a legal interest in any application of the invention because the original concept was initiated during a time when it funded the work.

"The underlying physical phenomena are non-trivial," says Dr. Fork. "However, we believe we can clarify and evaluate a highly productive strategy we have in mind by exploring the basic phenomena here in our terrestrial laboratories at UAH given a year or so of adequate funding. I think that SpaceX and other companies might be interested in this patent, although that is speculation on my part at this time."

The patented system is the product of years of research, and Dr. Fork credits his students' involvement in its development.

"Students in Electrical and Computer Engineering and Optical Engineering classes at UAH, our research group and some of my colleagues have been working on design of a system based on coherent light that will continuously derive power from a specific source, such as our sun, and usefully re-deliver that power in the form of coherent light to other locations in space," says Dr. Fork.

"I happen to be the sole inventor listed on the patent. However, interaction with a number of students - especially those doing computer modeling of the phenomena in my research group and my classes - has been important to clarifying the concepts, which are based primarily on optical quantum phenomena."