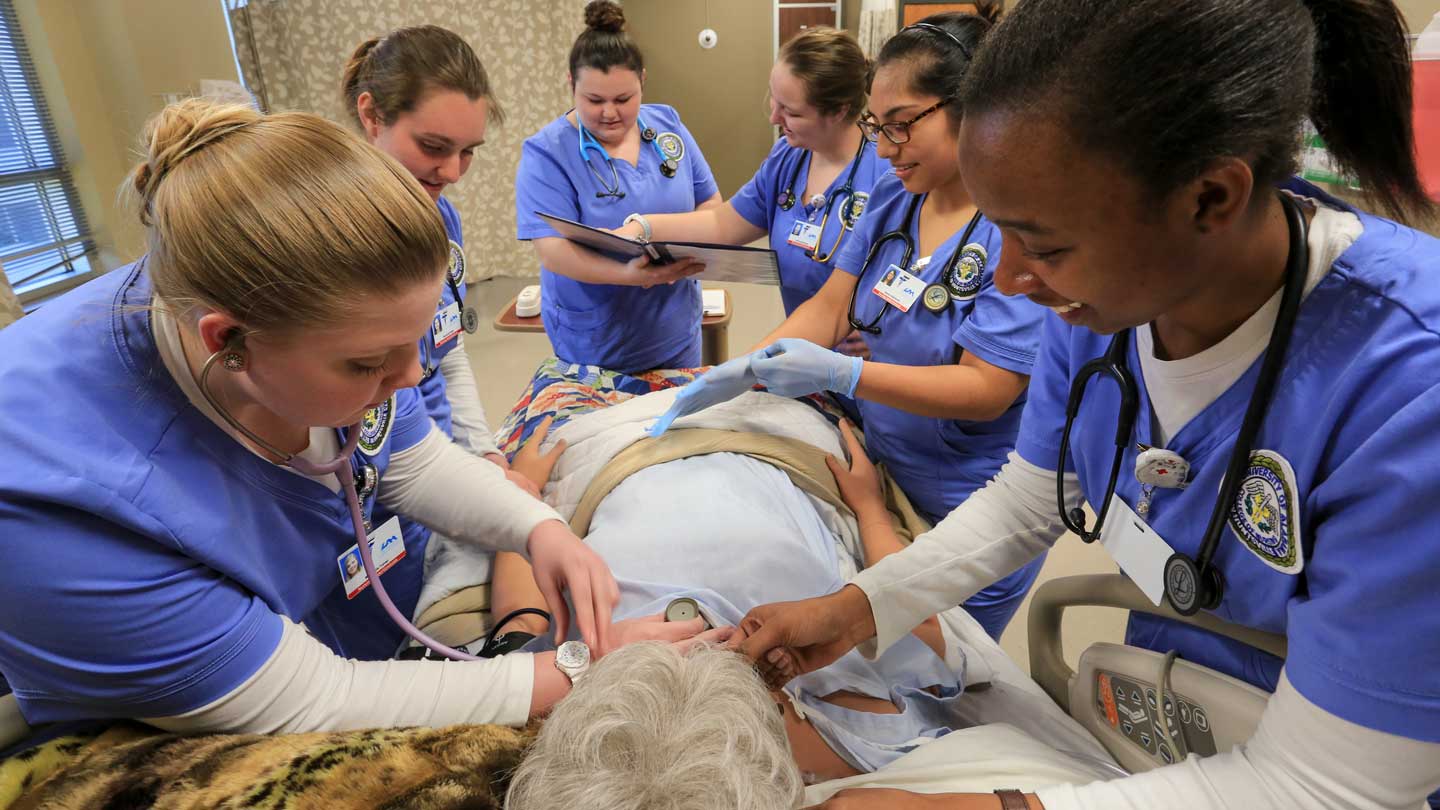 By getting hands-on experience at the College of Nursing’s Learning and Technology Resource Center, Dr. Hunter’s students are learning both the practical skills and compassion they will need as future caregivers for older adults. Pictured from left to right are McKenzie Turner, Alexandria White, Blakeley Stephenson, McKenzie Breeding, Jessica Altamirano, and Gabrielle Kind.

"Stay Standing" is the title of Dr. Amy Hunter’s most recent research study, and precisely what she wants geriatric patients to be able to do.

A clinical assistant professor of nursing at The University of Alabama in Huntsville (UAH), Dr. Hunter has been focused on improving the quality of care for older adults from the beginning of her academic career and now into her professional career. She earned both her bachelor’s degree and her doctorate of nursing practice from UAH’s College of Nursing, and now serves as a full-time faculty member and a part-time practitioner at the Center for Elder Care. In both capacities, she is working to ensure that older adults receive the best care possible and to inspire a passion for gerontology in her students.

"Our research team received a grant from Sigma Theta Tau International Honor Society of Nursing to study mobility, polypharmacy, and potentially inappropriate medicines," says Dr. Hunter. Older adults commonly take many medicines at once, a situation referred to as polypharmacy, and with each additional medication they take, the risk of PIMs rises. Inappropriate medications are detailed by the American Geriatric Society’s Beers Criteria, which provides medical professionals with information regarding medications that may not be necessary but that could cause serious side effects. "Research shows that a person over 65 who is on four or more medications and taking a specific class of medication deemed inappropriate can have cognitive impairment and mobility issues," she says, emphasizing that these problems are something physicians should seek to prevent.

If my students take away one thing, I’d like to change their perception of older adults, to embrace it and have a positive mindset.

The study, conducted with fellow nursing professors Dr. Karen Frith and Dr. Sharon Coffey, entailed comparing the outcomes of a group of older adults living within the general community to another receiving care at a gerontology practice. Both groups were given tests to determine their mobility, their awareness of medications, and their commitment to an exercise regimen. The patients were then retested at three-month intervals, allowing the researchers to make recommendations about possible PIMs. "We’d assess their medicines, and if they were on one that was inappropriate, we’d encourage them to ask their primary care physician about it," says Dr. Hunter.

As part of the study, Drs. Hunter, Frith, and Coffey also collaborated with two professors and a Ph.D. student from UAH’s Department of Electrical and Computer Engineering – Dr. Emil Jovanov, Dr. Aleksandar Milenkovic, and Ms. Priyanka Madhushri – to develop a smartphone application. The application not only measured three examinations of gait and balance with less human error in the timing and recording of gait-and-mobility tests, but it also anonymously cataloged the resulting data.

The researchers were able to conclude from the study that older patients who had participated showed improved strength and balance tests as compared to those who were seen at their primary care provider’s office; however, neither group had a significant decrease in the number of falls experienced in a year. In addition, patients in the study who were educated about PIMs scored higher on later medication tests, demonstrating that they had learned which medications to avoid.

Because older adults are considered a vulnerable population, their care necessitates a specialized approach that allows a single physician – known as a gerontologist – to care for that patient rather than multiple potentially unconnected health-care providers. When an older adult has to cycle between different specialists "that is when you get a lot of medications," says Dr. Hunter, which increases the risk of PIMs. "The difference is we don’t just look at one thing. We use a holistic approach to develop the plan of care," she says. "Even if it’s not a geriatric specialist but a primary care provider who takes care of older adults, the benefits found in this study could be easily replicated using the procedures we implemented." 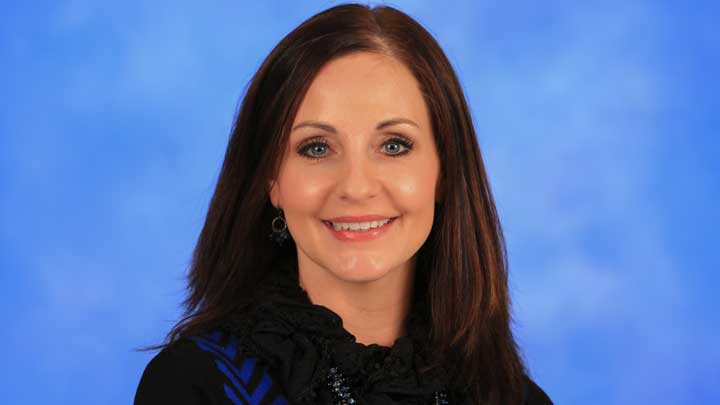 As an educator, Dr. Hunter is also working with her students to convince health-care providers and governmental agencies to take the wellbeing of older adults seriously. Last month, she and 100 of her gerontology students raised enough money to fund a trip to the Alabama State House in Montgomery – and make a donation to the National Alzheimer’s Association – to ask lawmakers to support a Silver Alert bill that would work like an Amber Alert for missing individuals with cognitive impairment

Looking toward the future, Dr. Hunter is finalizing preparations for an early April guest lecture from Dr. Richard Ackermann, the director of Family Health Center’s Geriatrics and Hospice/Palliative Medicine Fellowship. His presentation, about the struggles of dementia, is being offered as part of UAH’s Distinguished Speaker Series, which seeks to enrich the academic environment at UAH while connecting the university to accomplished scholars around the world. "When I saw the opportunity to apply for the UAH grant for the series," she says, "I thought, this is how I can bring education and knowledge to the university and the community."

Add to that the grants she’s already applied for to fund additional research studies focusing on older adults, and it’s clear Dr. Hunter’s mission to better meet the health care needs of geriatric patients is set to continue well into the future.