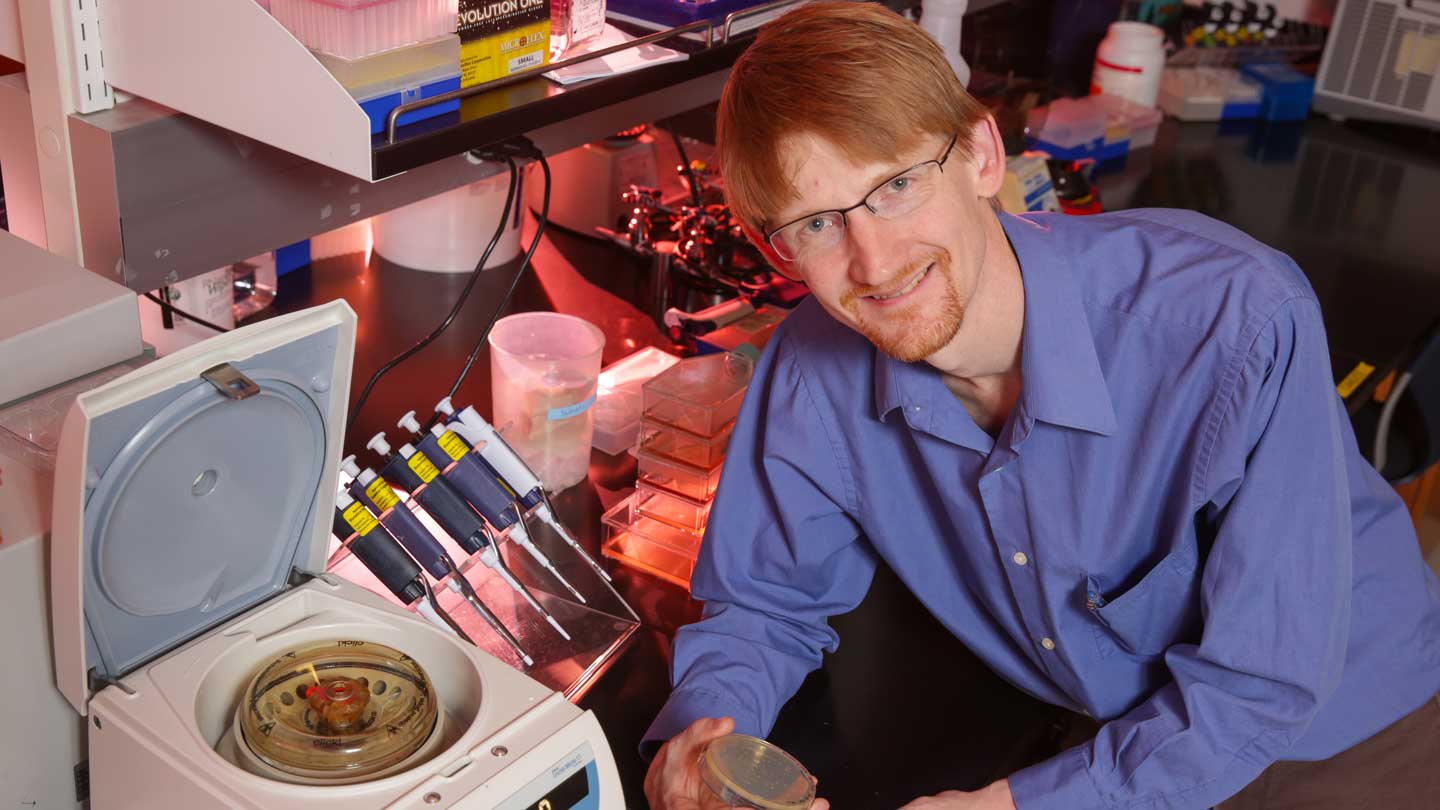 Research that will be done by The University of Alabama in Huntsville (UAH) and HudsonAlpha Institute for Biotechnology will provide a framework by which scientists can better understand how our cells work.

The research, which will be conducted at HudsonAlpha, is part of a four-year, $31.5 million National Institutes of Health (NIH) Encyclopedia of DNA Elements (ENCODE) Project to further the construction of a comprehensive parts list of functional elements in the human genome, including elements that act at the protein and RNA levels, and regulatory elements that control cells and circumstances in which a gene is active.

Dr. Eric Mendenhall, a UAH assistant professor of biological science and an adjunct faculty member at HudsonAlpha, has teamed with Dr. Richard Myers, president, science director and a faculty investigator at HudsonAlpha, as co-principal investigators for the Huntsville work. It’s part of the mapping center segment of the newest funded expansion of the ENCODE Project, a fundamental genomics resource launched in 2003 that is used by many scientists to study human health and disease.

“This is the logical extension of the Human Genome Project,” says Dr. Mendenhall.

ENCODE funds a network of researchers to develop and apply methods for mapping candidate functional elements of the genome, and to analyze its enormous database of genomic information. Scientists use this information to discover the genetic components of cellular function and disease. The ENCODE Project is funded by the National Human Genome Research Institute (NHGRI), part of the NIH.

“We knew that finishing the human genome sequence in 2003 was just the beginning,” says Dr. Myers. “ENCODE is concerned with an even larger undertaking: understanding the function of every element in the human genome.”

The research done in Huntsville will be added to ENCODE’s catalog of genomic information, which is open source and can be used in a variety of research projects – from generating hypotheses about what goes wrong in specific diseases to understanding the processes that determine how the same genome sequence is used in different parts of the body to make cells with specialized functions.

The data and tools generated by these projects are organized by a data coordinating center, which houses the data and provides the resource to researchers through an open-access portal, and a data analysis center, which synthesizes it into an encyclopedia for use by the research community.

Dr. Mendenhall and Dr. Myers will work at HudsonAlpha to study more of the approximately 1,500 transcription factors at work in our genes, of which only about 300 are currently characterized.

Transcription factors are proteins that can turn a cell into a heart cell, a liver cell, or even a disease cell. Their location along the DNA strand, or genome, is critical to what role a cell will play during its lifetime.

“The same blueprint is in virtually every cell of our body,” says Dr. Mendenhall. “We are looking for where the important switches are.”

Dr. Myers and Dr. Mendenhall have been employing the latest rapid genetic sequencing techniques to quickly locate and flag transcription factors in lab-grown liver cancer cells used for research purposes. The new funding allows them to fast-track even more discoveries.

“We want to flag the locations of as many transcription factors as possible,” Dr. Mendenhall says. “We are planning to look at hundred and hundreds more.”

Employing a procedure developed by the pair at HusdonAlpha called CETCh-seq, they first use a genetic editing technique called CRISPR/Cas9 to design a reagent to modify a genome in the liver cells.

“Then we can genetically engineer them, and flag the transcription proteins,” Dr. Mendenhall says. Once flagged, in the second part of the CETCh-seq method a protocol called ChIP-seq tells them where the switches are located.

“We can pull those flags out of the genome, and the transcription factors come out with their DNA to show us where they are located,” he says.

The lab is running dozens of parallel processes at one time, Dr. Mendenhall says, in order to flag many transcription factors as efficiently as possible, a testament to modern equipment and genetic techniques.

“I tried to do something similar 10 years ago, and it took me years to do just one,” he says.

Much like an electrician testing a home’s circuitry, once researchers know where the switches are they can then begin to test them to see which circuits they control, revealing new information about how the genome works – an area of science known as gene regulation.

“For example, you can begin to ask what transcription factors are found near the gene that is causing disease,” Dr. Mendenhall says. “This research helps to set the future for gene regulation.”

About The University of Alabama in Huntsville

The University of Alabama in Huntsville is a Tier 1 research university that prepares students for demanding positions in Engineering, the Sciences, Business, Nursing, Education, and the Arts, Humanities, and Social Sciences. Located within one of the largest research parks in the United States, UAH is considered one of the nation's premier research universities.