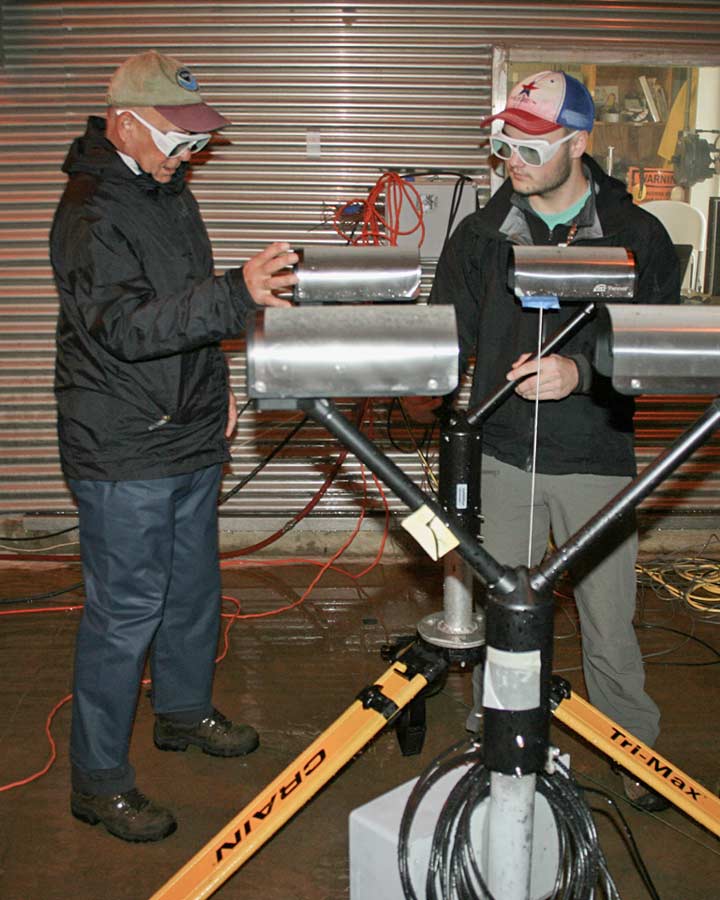 Nathan Lawrence knew the experiment he was helping with involved monitoring artificial rain in a U.S. Army lab at Redstone Arsenal, so he wore a rain jacket.

That, he reasoned, should keep him dry as he ran the computers collecting data from instruments set up inside the rain chamber.

What he hadn't calculated into his plan was going into the artificial rain every five minutes to verify how much water was being collected in the somewhat low-tech rain gauges. Every five minutes.

"It was not exactly what I expected," he said later. "I expected more sitting behind the computer, but I got wet. Once they started there was a lot of in and out of the chamber, which is basically like a thunderstorm. I got soaked, but it was a lot of fun."

Lawrence, a UAH aerospace engineering major from Florence, was helping Dr. Michael Newchurch, a UAH professor of atmospheric science, whose Regional Atmospheric Profiling Center for Discovery (RAPCD) was supporting an Army project developing a laser-based system for tracking incoming targets, such as mortar shells and rockets.

"They are testing prototype trackers in a variety of atmospheric conditions, including fog, rain, dust and smoke ­- in other words the variety of conditions you might run into on the battlefield," Dr. Newchurch said. "Because we know about these things, they asked us to characterize the rain and fog droplet distributions to verify conditions inside the test chamber were accurate reproductions of conditions you might have to deal with in nature.

"We measured rain droplet distributions while the laser was operating, taking measurements with our rain gear and goggles and soaking wet shoes," he said. "Our job was to characterize what kind of rain storm it was. I thought this project was about radar propagation, not getting soaking wet."

At one point there were 4 inches an hour of artificial rain falling inside the chamber.

"That's a lot of rain," Dr. Newchurch said. "We characterized that as a heavy thunderstorm." 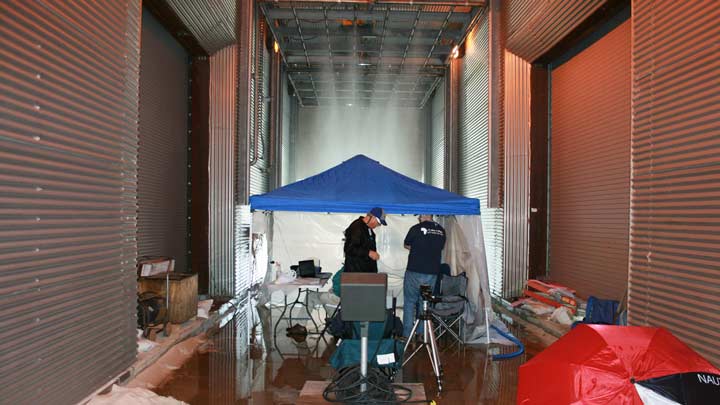 Artificial rain pours down in a chamber at Redstone Arsenal where scientists from UAH are helping the U.S. Army test a laser-based tracking system.

After rain came fog. ("The fog chamber is about 60 feet long and you could barely see from one end to the other," Dr. Newchurch said.) Project scientists and engineers with the Army's Advanced Weather Tracker program are still working through which laser frequency is most efficient in rain and fog, so the smoke and dust portions of the testing are scheduled for later.

To do UAH's portion of the testing, Dr. Newchurch, Lawrence and Ross Sargent, also an undergraduate working in Dr. Newchurch's lab, set up distrometers and other instruments inside the rain and fog chambers at the Redstone Test Center. David Bowdle, an aerosol research consultant at ARC, Dr. Kevin Knupp, a professor of atmospheric science at UAH, and the Marshall Space Flight Center's Dr. Patrick Gatlin provided expertise with the instrumentation and measurements.

UAH's participation was funded through the Army's Space and Missile Defense Command.