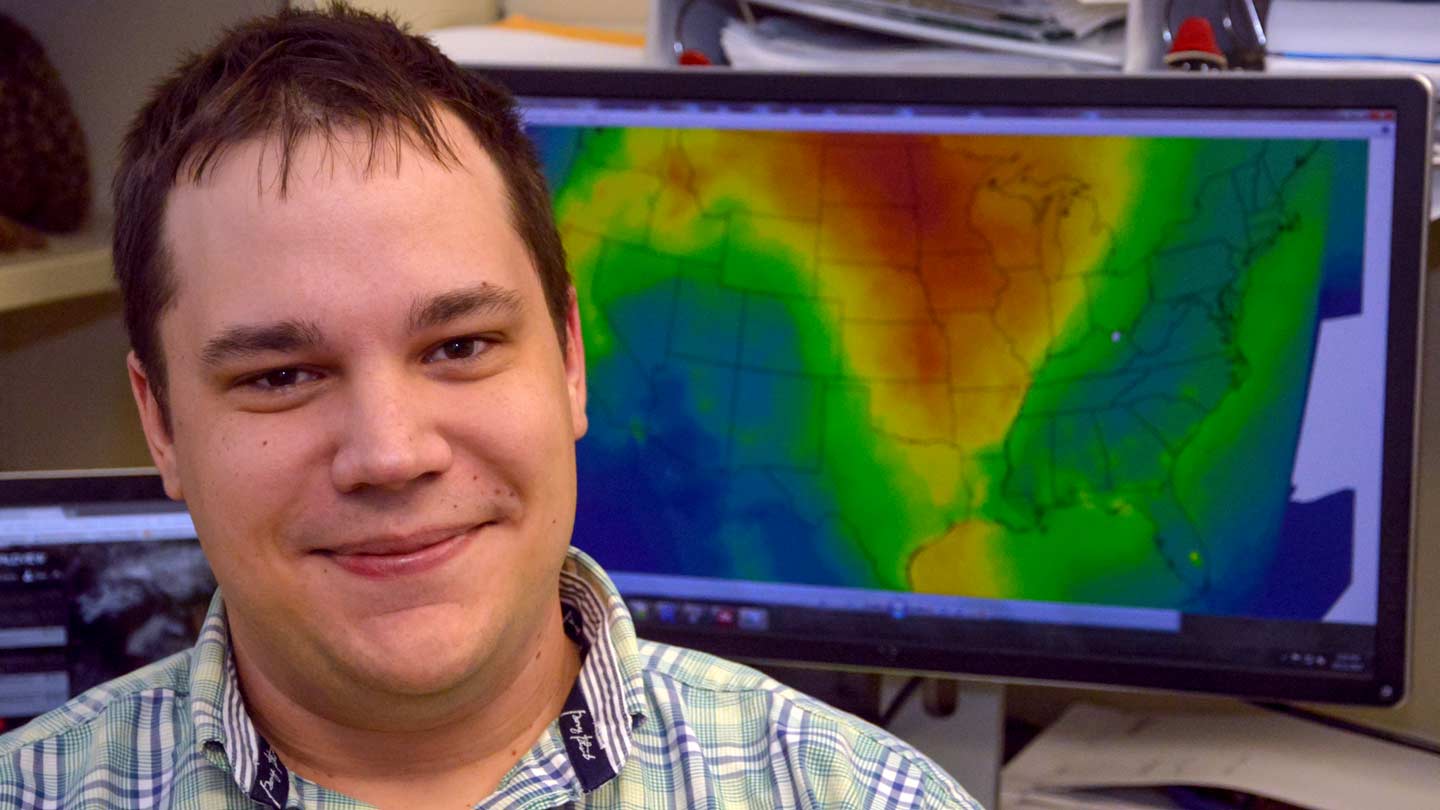 As so often happens in science, UAH doctoral student Aaron Kaulfus was looking for something else when he realized his forest fire smoke research might be significant.

Smoke from forest fires might contribute to more than half of certain gritty air pollution events in the continental U.S. during the summer, and as much as 20 percent of those events throughout the year, according to new research at The University of Alabama in Huntsville (UAH).

This research could be a step toward developing tools to warn of possible smoke-related pollution events and a better understanding of the potential health effects of smoke from planned and controlled forest burning.

"You could use something like this as a way to determine whether a particular planned burn is going to be a tipping point in going over the pollution limit downwind and whether you should burn that day," says Aaron Kaulfus, a graduate student in UAH's Department of Atmospheric Science. 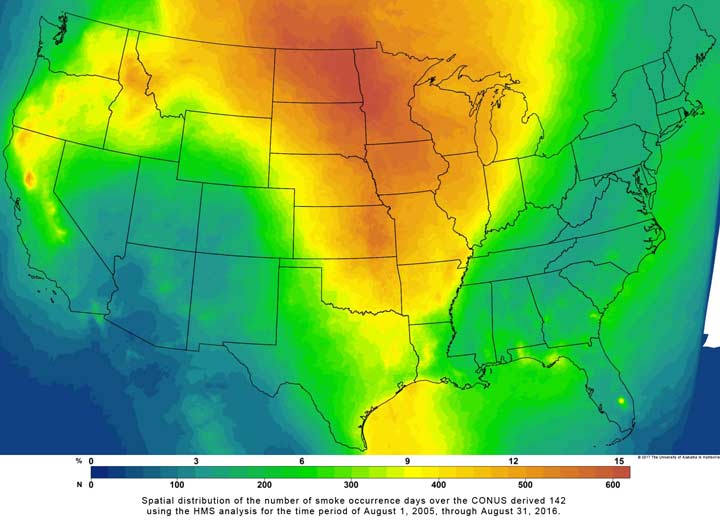 Data gathered by NASA and NOAA satellites show how many days different parts of the continental U.S. were covered by smoke from forest fires during a 133-month study period from 2005 to 2016.

Kaulfus and Dr. Udaysankar Nair, an associate professor of atmospheric science at UAH, used data collected by a pair of instruments on NOAA and NASA satellites to track both hot spots that indicate forest fires and the smoke plumes from those fires. They combined that with data from the Environmental Protection Agency (EPA) on surface sites where air pollution exceeded the safe limit of particles no more than 2.5 microns in size.

Particles smaller than 2.5 microns in diameter (less than one-quarter of the width of a human hair) are small enough to get into a person's lungs. In heavy-enough concentrations, they can cause damage. EPA estimates biomass burning contributes more than 25 percent of all small particle pollution (identified by the EPA as PM2.5) in the U.S.

The UAH team found that during the summer — when the level of smoke coverage across the U.S. peaks — about 52 percent of all PM2.5 air pollution events in the continental U.S. occur when smoke from forest fires is present.

At rural pollution monitor sites in the Northwestern U.S., more than 80 percent of summer days when smoke is present also have excess PM2.5 particles in the air.

On an annual basis, "at least 20.1 percent of the total daily exceedances coincided with identifiable smoke plumes overhead," Kaulfus says. "On average, the PM2.5 concentrations were higher for days during which smoke was present over the area."

While the effects of smoke from forest fires and other biomass burning on levels of ozone (another pollutant) have been studied, Dr. Nair says this is the first attempt to connect smoke and particulate pollution on a nationwide basis.

"We took a national approach to it rather than a station-by-station approach," Kaulfus says.

This research, which was supported by the National Science Foundation and NASA, has been accepted for publication in the journal Environmental Science and Technology.

While there was smoke overhead in one of five particulate pollution events during the study period, Kaulfus says there isn’t a clear-cut cause-and-effect relationship.

"It was at least plausible that smoke was influencing those surface contaminants," he says. "But one of the biggest problems with the NOAA smoke product is that there is no way of knowing the vertical profile of where the smoke is, whether it is on the surface or up in the deep layer of the atmosphere."

"What this really does is give us the upper limit of forest fire smoke’s effects on these pollution events," adds Dr. Nair.

The area most affected by forest fire smoke was a large wedge in the central U.S., from Canada to east Texas. During the study period, from 2005 to 2016, the NOAA and NASA satellite instruments saw more than 600 days with smoke cover over most of North Dakota, Minnesota, and Iowa, as well as eastern portions of both Kansas and Nebraska, and the eastern half of South Dakota.

While forest fires — both wild and planned — in the continental U.S. contributed smoke over much of the contiguous 48 states, a significant fraction of the smoke recorded over that wedge of most frequent smoke coverage came from forest fires in Canada, Alaska, and even Siberia, Kaulfus says.

"We can see all the smoke being piped down from Canada, all the way down over the eastern cities, extending a couple of hundred kilometers out over the Atlantic and the Gulf Coast," says Dr. Nair.

Under stable atmospheric conditions, smoke plumes from smoldering fires can be confined to a shallow atmospheric boundary layer near the ground, enhancing small particle pollution at the surface. In the case of high-energy flaming fires, smoke can be injected to higher altitudes.

Routine convection processes can also mix smoke from either kind of fire throughout the deep atmosphere, which can transport smoke thousands of miles from its source and impact downwind air quality.

An area of the western Gulf of Mexico off the coast of Texas and western Louisiana had more than 350 days of smoke cover during the study period, largely caused by forest fires and biomass burning in Mexico and Central America, Nair says.