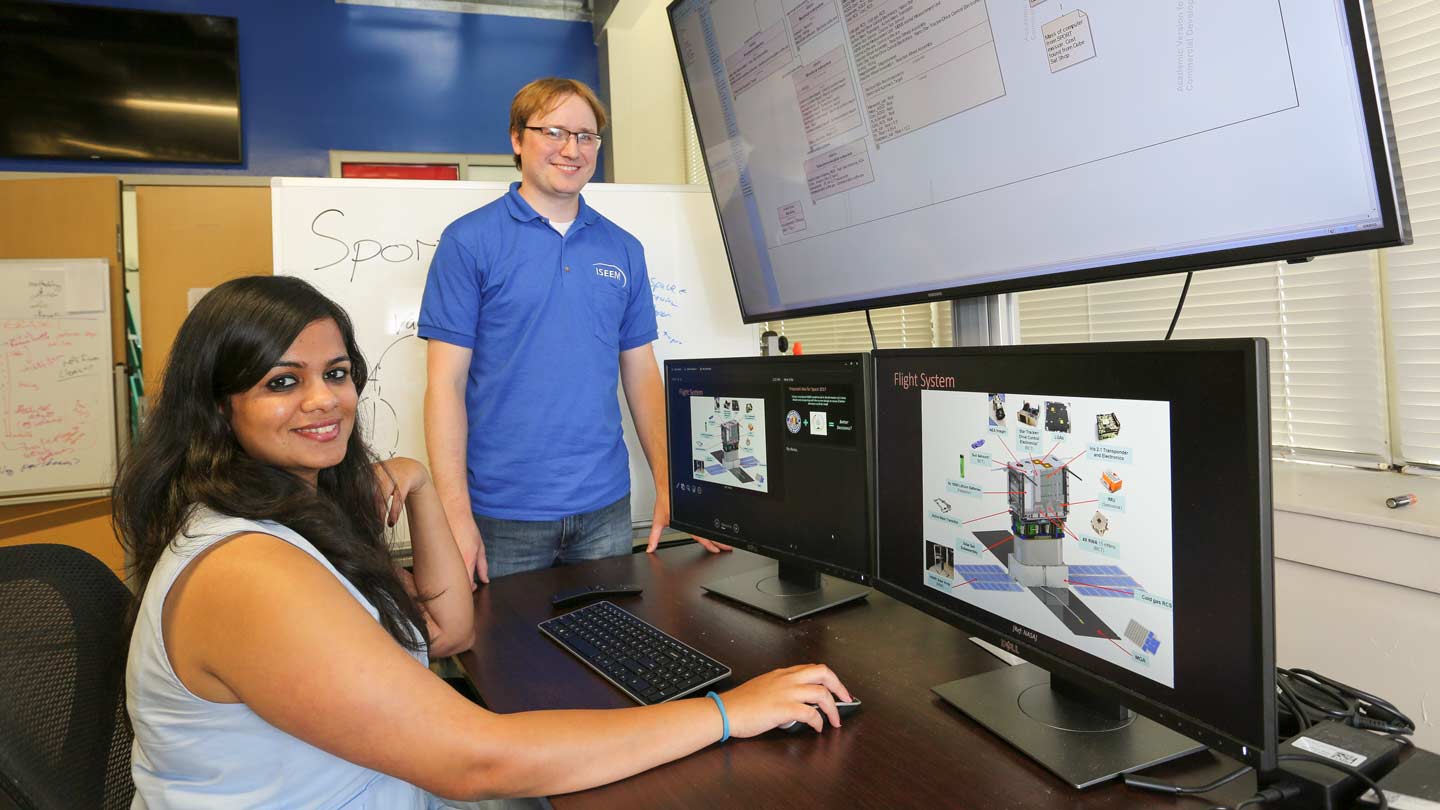 Ph.D. student Garima Bhatia and assistant professor Dr. Bryan Mesmer, both in UAH’s Department of Industrial & Systems Engineering and Engineering Management, are helping ensure the success of a joint NASA-Brazil mission by creating a digital twin of the CubeSat that will launch in 2020.

With a NASA grant for $185,000, the College of Engineering at The University of Alabama in Huntsville (UAH) has been tasked with creating a "digital twin" of a CubeSat to ensure that it will function properly during its yearlong deployment to study equatorial plasma bubbles. The effort supports the joint NASA-Brazil Scintillation Prediction Observations Research Task (SPORT) mission, led by Dr. James Spann, chief scientist for the Science and Technology Directorate at NASA’s Marshall Space Flight Center, in partnership with Goddard Space Flight Center, the Brazilian National Institute for Space Research, the Technological Institute of Aeronautics (Brazil), the Aerospace Corporation, Utah State University, the University of Texas at Dallas, and UAH.

As their name implies, equatorial plasma bubbles are an ionospheric phenomenon that proliferates in the Earth’s mid-latitudes. Their scintillations have the ability to disrupt terrestrial communication and navigation systems, a problem that negatively impacts Brazil’s airports in particular. The hope is that the data collected by SPORT’s 12-month mission, which is being funded by NASA’s Science Mission Directorate in Washington, D.C., will help researchers unlock the mystery of plasma bubbles and mitigate their effects here on Earth.

Of course, for all of that to happen, SPORT has to work properly, which is where the digital twin comes in. "With this type of space mission, we only have one shot," says Dr. Bryan Mesmer, an assistant professor in the Department of Industrial & Systems Engineering and Engineering Management (ISEEM) who is serving as UAH’s lead on the project. "So the idea is to test the system in the simulated world to give us a high probability that it will work once it is in orbit."

With this type of space mission, we only have one shot.

To help create the digital twin, which is being done at UAH using a systems modeling language software called Cameo Enterprise Architecture, Dr. Mesmer has enlisted the assistance of Garima Bhatia. A graduate research assistant pursuing a Ph.D. in the ISEEM Department, Bhatia had previously used Cameo to model a similar NASA CubeSat called Near-Earth Asteroid (NEA) Scout. "While the mission is different, many of SPORT’s basic components are the same as NEA Scout’s," says Bhatia. "So we can use the models I created for NEA Scout and modify them to model SPORT."

Once that’s done, the pair can then conduct "value modeling" to figure out the various ways that SPORT can be improved to more effectively carry out its mission. "That’s the expertise we bring to this project – trying to understand what people care about in a mathematical form and making sure the system is optimal for what they care about," says Dr. Mesmer. "In this case, the preference is likely to maximize the probability of mission success, but we also want to look at things that would flow into that, such as the accuracy of the data, the duration of the mission, and other attributes."

Both will also travel to Brazil in the near future, Bhatia this fall and Dr. Mesmer in the spring – to share their modeling expertise with their counterparts, introduce model-based systems engineering approaches, and gather additional data that can be integrated into the model. And by this time next year, SPORT itself will be en route to Brazil, where it will undergo integration and testing prior to its launch by NASA in 2020. "It will be the application of something we have been talking about for a while, so to actually put it onto a system that’s going to be out in space will be awesome," says Dr. Mesmer, who plans to use the knowledge gained through SPORT’s design process to improve the design of future CubeSats.

As for the more immediate future, the hope is that Bhatia’s participation will boost her already illustrious resume and enable her to land a research position in the field. "Garima came here looking for aerospace industry experience, and so she was put on this project on purpose to make her more marketable," says Dr. Mesmer. "When she leaves, her research will not only be theoretical, but it will also be practical and have real-world applications."

Then, of course, there’s the sheer thrill of being part of a NASA mission – something Bhatia has worked toward since reading a biography of Indian-American astronaut Kalpana Chawla as a middle school student. "Aerospace has always been my passion," she says. "Working on this project, especially for an international student, is really exciting."